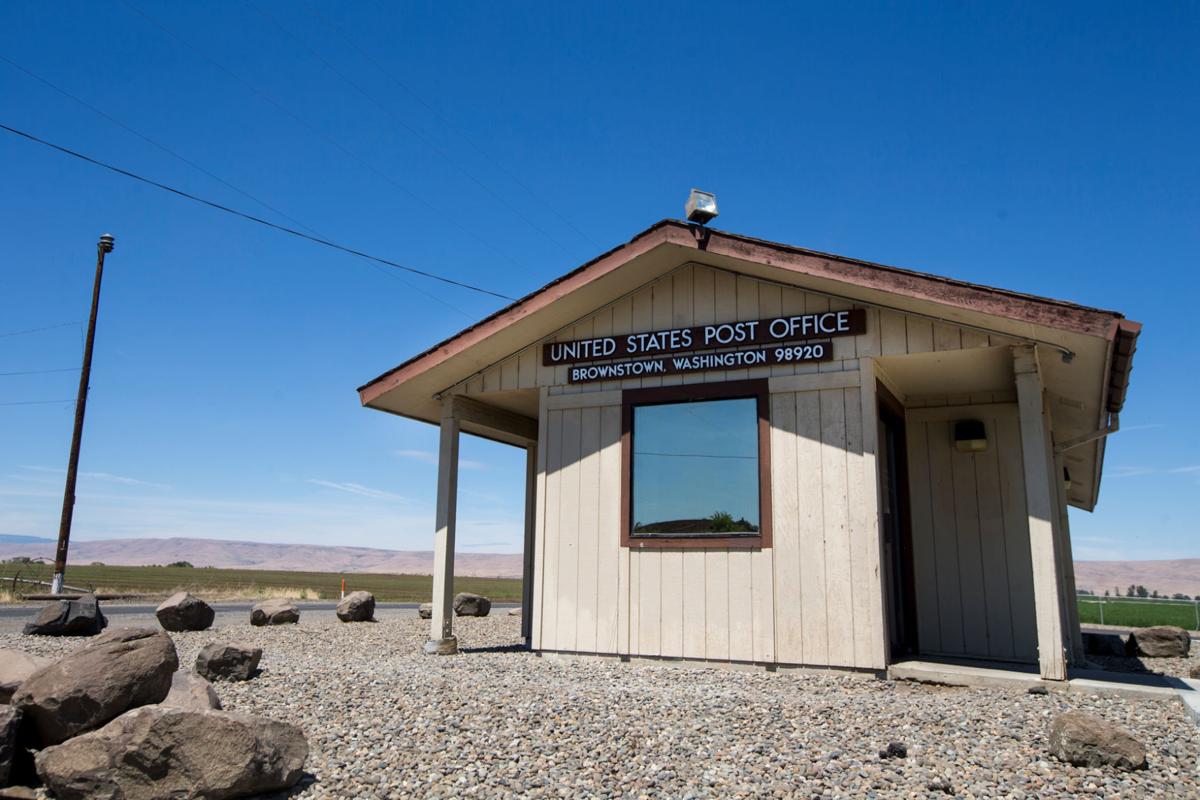 Although small, the post office in Brownstown, Wash. serves between 300 and 350 people from areas such as Goldendale, White Swan, Wapato and Toppenish. It is photographed here on Friday, July 21, 2017. (JAKE PARRISH/Yakima Herald-Republic) 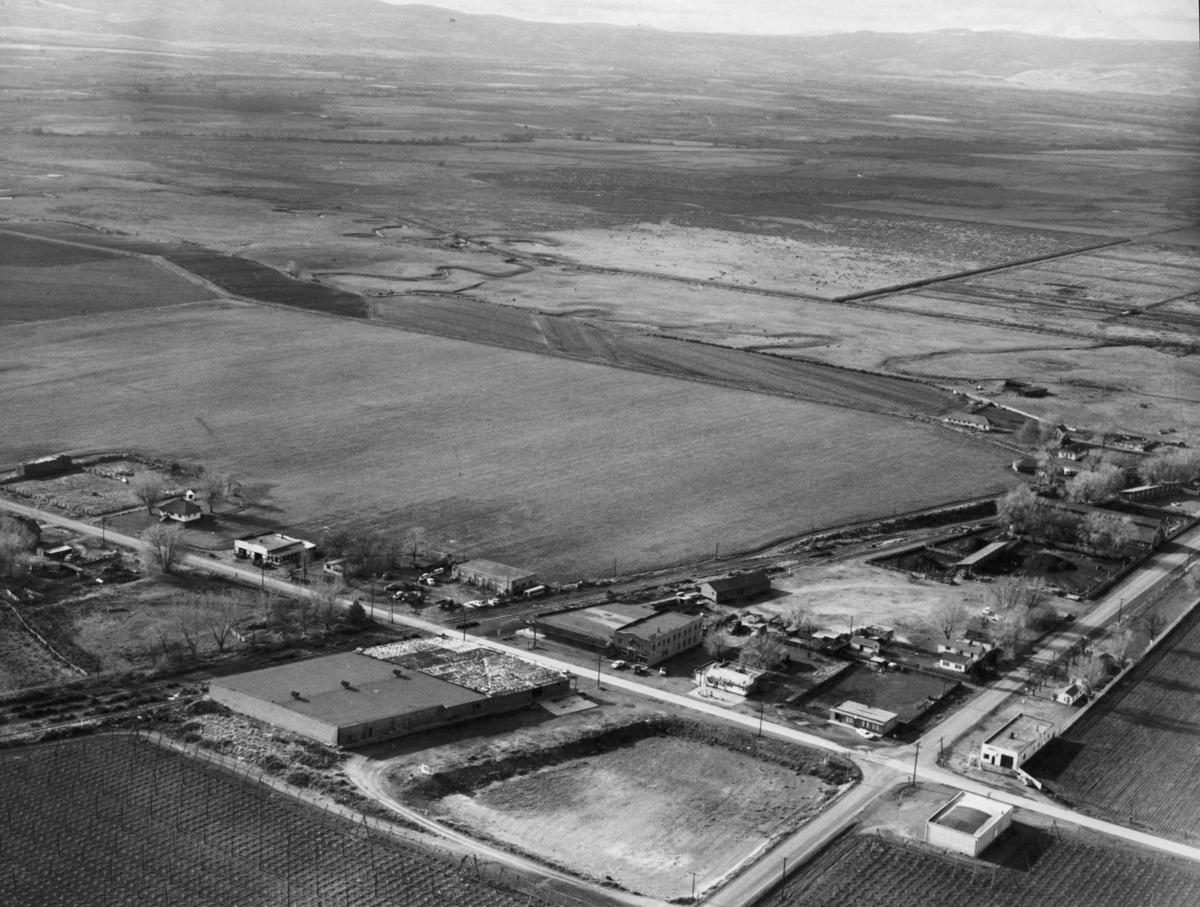 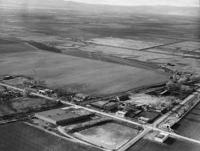 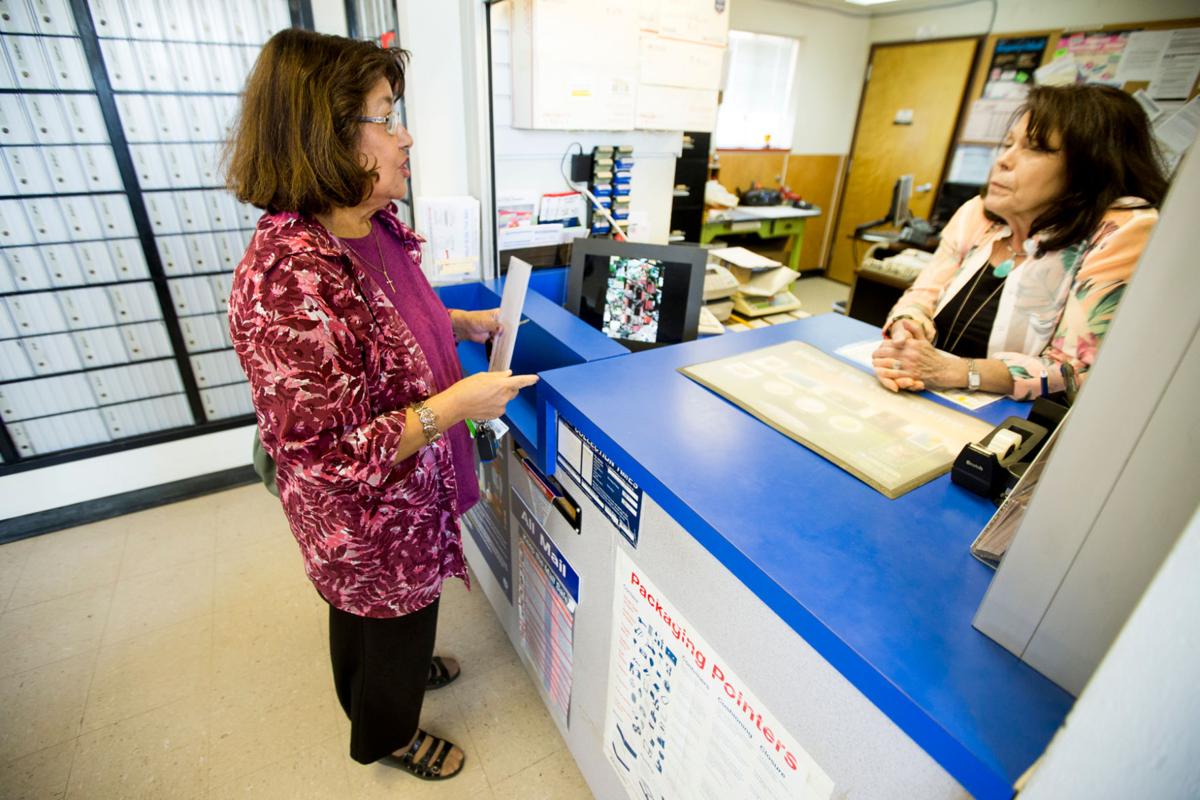 Elvia Gonzalez visits with postal support employee Lorena Hartzog at the post office in Brownstown, Wash. on Friday, July 21, 2017. Hartzog is the only employee of the post office, which serves more than 300 people living in the surrounding rural areas. (JAKE PARRISH/Yakima Herald-Republic)

Although small, the post office in Brownstown, Wash. serves between 300 and 350 people from areas such as Goldendale, White Swan, Wapato and Toppenish. It is photographed here on Friday, July 21, 2017. (JAKE PARRISH/Yakima Herald-Republic)

Elvia Gonzalez visits with postal support employee Lorena Hartzog at the post office in Brownstown, Wash. on Friday, July 21, 2017. Hartzog is the only employee of the post office, which serves more than 300 people living in the surrounding rural areas. (JAKE PARRISH/Yakima Herald-Republic)

BROWNSTOWN — As postmaster of Yakima County’s smallest post office, Lorena Hartzog talks business much of the time, but her job also offers the chance to chat with customers about their favorite pastimes — and hers.

“I finally got an eagle shot,” Hartzog said of her photo showing the regal bird perched on a skeletal branch amid low brush. “People would come in and tell me where one was.”

Hartzog began taking photos soon after she started working at the Brownstown post office in February 2008. The Canon EOS 40D was a present from husband Jim. Since then, she’s taken more than 135,000 photos, she estimates.

A couple hundred of her photos slowly scroll through a digital display frame on the retail counter where Hartzog leans forward to greet visitors. There’s a dish with a few pieces of candy and shipping boxes displayed with prices.

In late July 2011, the U.S. Postal Service announced it was considering closing the Brownstown post office among more than 30 others statewide. About 1,200 post offices nationwide faced possible closure as the Postal Service looked to stem losses totaling $8 billion in 2010.

After public outcry, the postal service backed down from closing the Brownstown office, compromising with reduced retail window hours to match customer use as part of a national strategy to keep its smallest post offices open and thus retain a crucial cornerstone of many rural communities.

“They closed some of them. Others were closed and they put post office boxes into another location,” Hartzog said.

In the years since the Brownstown post office faced possible closure, it has remained an important destination for its customers. Depending on the hour of the day and the day of the month, several or even dozens of visitors may come to the small tan building to check post office boxes, buy stamps or mail packages.

An hour may also pass without any visitors. But for those who rely on regular delivery of important items or need supplies, the little post office matters.

“Sometimes they get here just as I’m getting ready to close,” Hartzog said, and she will stay open a little bit longer. She lives just a few miles away.

“I have people that come from White Swan, Harrah, Goldendale; it’s because of where they work,” she said. “I don’t think I get any more from Yakima — I used to.”

Then there were tumbleweeds

The unincorporated community on the Yakama Reservation is roughly 3 miles west of Harrah and about halfway between Wapato and White Swan. It might have about 50 residents, Hartzog estimated. Most of the several buildings clustered along Brownstown Road near its intersection with Branch closed years ago.

And there is Joe’s Place, a low-key cafe that serves burritos, tacos and other quick fare from around 8 or 8:30 a.m. until 3 p.m. weekdays and noon on weekends.

The post office sits on the southeast corner of the four-way stop at Branch and Brownstown roads. “There used to be a gas station across the road,” Hartzog said, pointing to a shell of a building on the northwest corner of the intersection.

She pointed to another gutted structure on the southwest corner. “Kitty corner there was a meat market. Next to that was a hardware store” in the same building, she said.

Arquette’s Grocery, intact but shuttered, stands just to the south of the former meat market/hardware store, with Joe’s Place next to it. The unmarked cafe is on the first floor of a long, two-story building that has been a tavern and hotel, with what was a dance hall to the south.

“On this (post office) site was a grocery store in competition with the other one,” Hartzog said, noting that the post office formerly operated in Arquette’s. “There used to be a little cabin by the (meat market)/hardware store. Not so much for migrant workers, but people who worked in the area.”

It’s not the only post office building in an unincorporated Yakima County town — Buena, Cowiche, Outlook, White Swan and Parker feature freestanding post offices, with the structure in Parker not much bigger than that in Brownstown. They’re among 22 post offices in Yakima County, according to http://postofficefinder.org/wa/yakima.

The Brownstown post office is believed to be the smallest of those U.S. Postal Service facilities in Yakima County, said Ernie Swanson, Postal Service spokesman. Hartzog’s husband thinks the building is around 800 square feet.

Originally named Bench, Brownstown was renamed in the 1930s at the request of Reese B. Brown, a resident who was buying up land around town for a horse and cattle ranch, according to “Yakima Valley Historical Society Proceedings, Vol. 4” by George Martin. Brown built a store and excavated a basement for a bank, along with other projects that ended when he died in a car crash, the book notes.

“The town lost its vigor probably in the mid- to late 1960s. It had its prosperous times, especially when the sugar beet company, U&I, was in Toppenish,” he said.

Hundreds of people worked at the Utah & Idaho Sugar Co. plant there, leaching sucrose out of sugar beets with hot water, then pressing out the remainder.

“It was a huge industry,” Hartzog said of the company owned by the Church of Jesus Christ of Latter-day Saints. “Brownstown was part of that. At one time it was a sparkling little town; you couldn’t find a tumbleweed (downtown).”

A train would stop in Brownstown so farmers could load potatoes for sale in other Valley cities, and the tavern brought in many people, Hartzog said.

“It’s still a little hub for the rural area,” he added.

“There currently are no large-scale plans to close post offices anywhere in the U.S.,” Swanson said in an email.

One of customers’ favorite aspects of the Brownstown post office is that it is open during the lunch hour, Lorena Hartzog said. She doesn’t take a break during her four-hour weekday shifts.

At the same time, those post offices are a good resource for the Brownstown facility. “The nice thing is if we don’t have the answers, there’s another post office,” she said. “We can call them.”

Hartzog was born in Yakima but grew up in the Seattle/Tacoma area. She returned to the Yakima Valley for a family visit in 1965, meeting her husband, Jim, when he helped her catch a horse.

They’ve been married for 51 years and lived on the West Side for much of that time, operating Hartzog Landscape & Nursery in Tacoma for about 35 years. Their daughter and three grandchildren live in Oklahoma.

After helping run the business in Tacoma, she wanted a job when they returned to the Valley. She mulled different options, including working at a post office.

“I think I could do that; I’m a people person,” she said.

After heading to one post office for stamps soon after that but not finding what she needed, Hartzog visited the Brownstown facility.

“The postmaster was sitting down and I said, ‘You wouldn’t by chance need vacation help, would you?’” to which the postmaster, Kristen Luther, responded by immediately standing up and handing her an application.

“Two months later, I got hired on,” Hartzog said. She became postmaster — and its sole employee — after Luther left for the postmaster job in Mabton.

In her spare time, Hartzog photographs sunrises and sunsets, Mount Adams and other natural beauty, birds and other creatures, family and friends and powwows. She posts them on Facebook on her public “Lorena Hartzog, Lightenup Photos” page.

A few of her photos are on display at the Toppenish post office, and some have earned awards. She also creates art assemblages and writes songs — two CDs have been made of songs she’s written — but photography is her favorite hobby by far.

“There’s a lot of people that know her,” said Castilleja, who has a post office box and walks over to the post office three or four days a week. “What I see of her, I like her.”

Castilleja, who is in his 80s, said it wouldn’t be a big deal if he had to give up his PO box — he would just put up a mailbox outside his business for delivery. He would have to head elsewhere for stamps and other postal purchases if the Brownstown post office went away, though.

More than anything, customers would miss Hartzog. So they’re glad she is there.