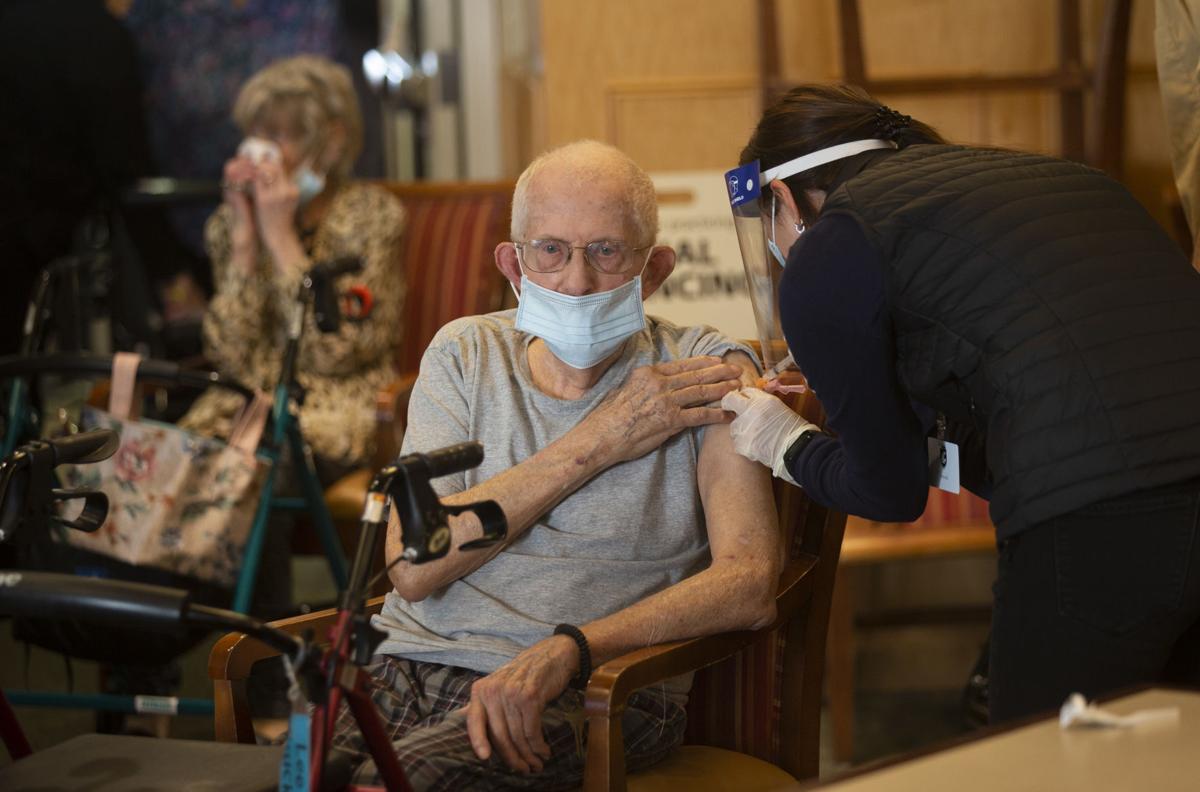 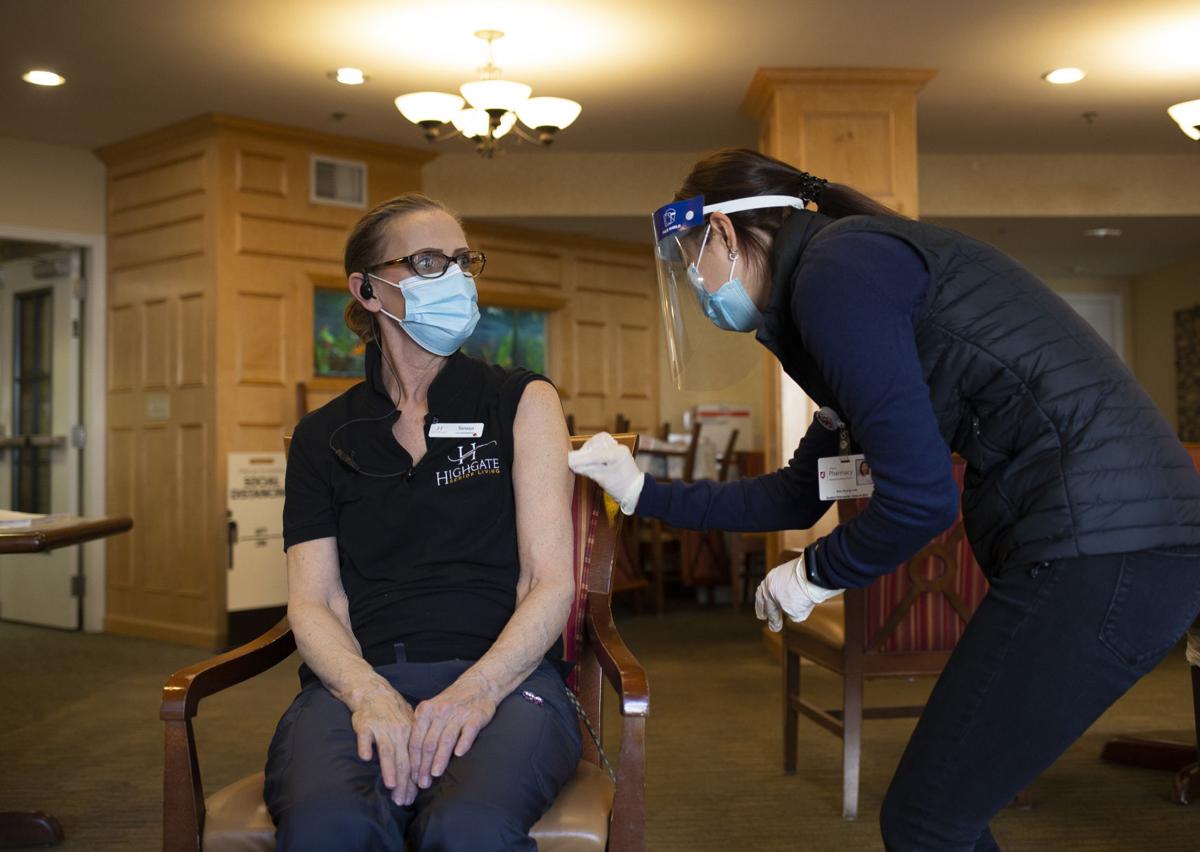 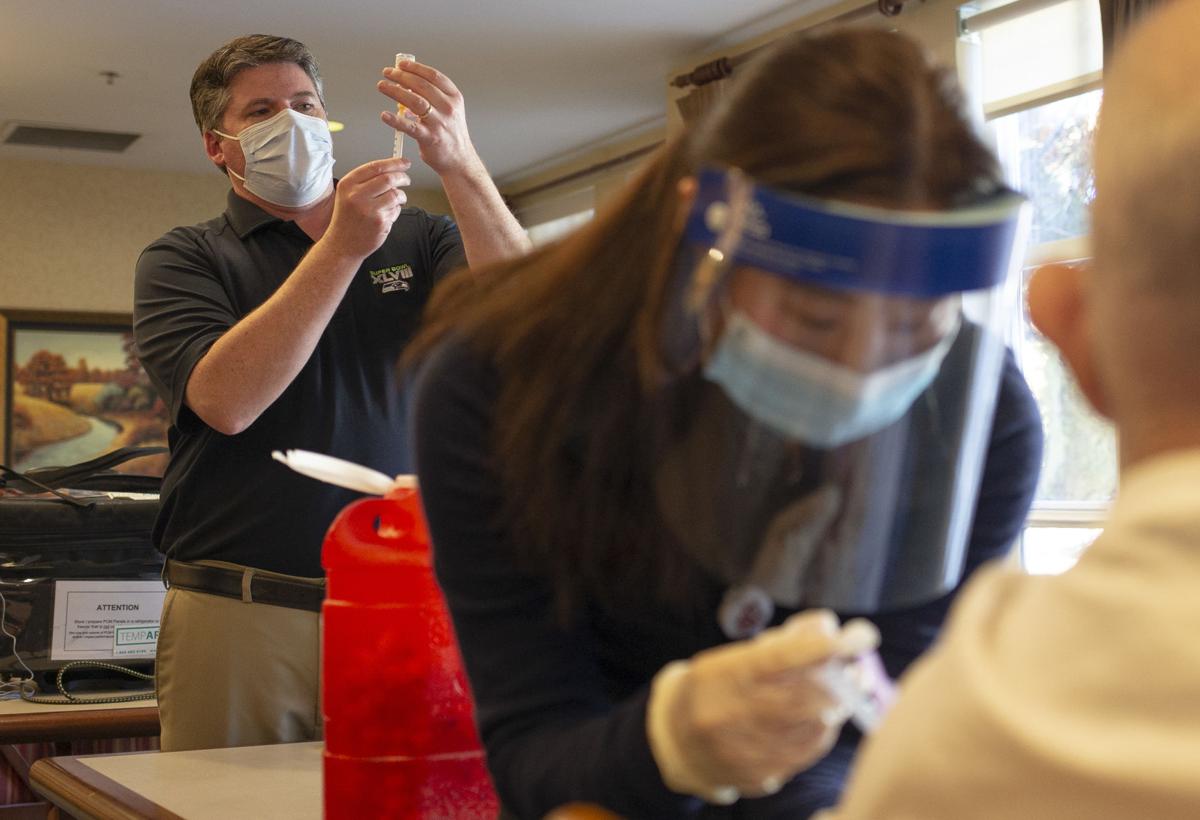 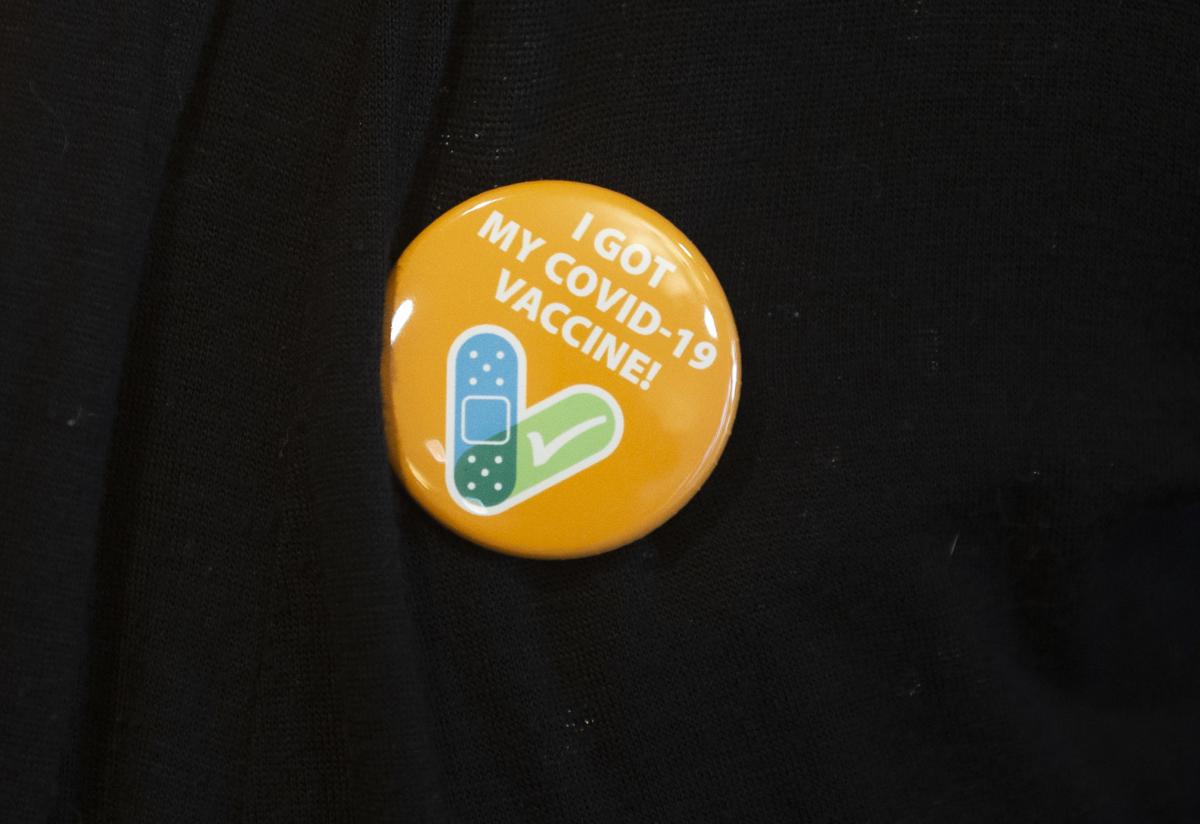 Pharmacists from Tieton Village Drugs were there to administer the first dose of COVID-19 vaccines to residents and staffers.

June Lobb, an 86-year-old resident at Highgate, was thankful the vaccine was available. She said getting vaccinated was simple.

“It was like I thought. They did it fast,” she said. “It was no problem whatsoever. It didn’t even hurt.”

Between staff and residents, about 65 individuals at Highgate were scheduled to get the first dose of Moderna’s COVID-19 vaccine on Thursday, said Todd Kean, a pharmacist from Tieton Village Drugs. Highgate has 54 residents in memory care and assisted living, according to Highgate community relations coordinator Mandy Ketcham.

The Moderna vaccine is one of two newly developed COVID-19 vaccines approved by the U.S. Food and Drug Administration for emergency use. It is approved for use in individuals 18 and older, and is a two-part vaccine. The second dose is administered 28 days after the first.

At Highgate, that means staff from Tieton Village Drugs will return in 28 days to administer the second dose of the vaccine. Because they anticipate that some residents and staff may get their first dose then, they’ll return a third time 28 days later to wrap up.

Clinical trial data show that Moderna is 94% effective following both doses, according to the state Department of Health. No serious safety concerns were found in the trials. The first shipment of the vaccine arrived in the state in late December.

The Pfizer-BioNTech COVID-19 vaccine, which arrived in the state a week prior, is 95% effective within two weeks after two doses according to trials. It similarly has no serious safety concerns and is available for individuals 16 and older.

Yakima County is focused on vaccinating people in both Phase A1 and A2 of the state’s COVID-19 vaccination plan. That phase includes high-risk workers in health care settings, first responders and long-term care residents and staff.

People who qualify should visit the Yakima Health District’s website to see a current list of providers scheduling vaccinations. The health district is urging those eligible to make appointments before distribution opens up further.

State officials said this week they are working to move up timelines for the next group — people age 70 and over and people 50 and up who live in multi-generational households. The federal government also said it was working to expand distribution.

The process of getting vaccinated was swift. Each person filled in paperwork requesting to receive the COVID-19 vaccine, verifying patient details and listing any high-risk medical conditions. One member of the Tieton Village Drugs pharmacy team collected the paperwork and created a vaccination card to indicate when the second dose was due. A second pharmacy staffer drew up a dose of the Moderna vaccine, and a third asked the person if they wanted it injected into the left or right arm before administering the dose.

After the vaccine was given, Michael Rosencrance, a registered nurse at Highgate, placed a sticker on the person’s shoulder indicating the time they received the dose. They were then asked to wait 15 minutes in the same room for observation to ensure there were no adverse reactions.

Highgate employees put on buttons after they were vaccinated to let people know. Ketcham said this was in part to put the residents at ease.

Joyce Friend, a resident in her mid-80s, said she was glad to see the vaccines administered at the facility.

“I don’t want to get the disease. I don’t want COVID,” she said. Instead, she hoped for “a healthy life.”

Highgate said vaccinations were a step toward more social interactions and family visits, quelling some of the isolation of past months.

Highgate was among the local long-term care facilities hit with COVID-19 in the spring and summer. Ketcham said they had been fortunate that the last outbreak in the facility was in mid-June. She did not have the total number of cases at Highgate throughout the pandemic.

Recently, Highgate resumed communal dining and some group activities, which helped lift people’s spirits, the center said in a news release about the vaccine distribution.

Lobb, a self-described introvert, said her tiny terrier, Pepper Troubles, had staved off loneliness during isolation. She had a long career working in geriatric care before retiring, and she said she was glad to see her community getting vaccinations to keep them safe.

“It’s hard for me to be on the inside instead of helping, because I worked in geriatrics for so long,” she said.

Vaccines in the Valley

As of Tuesday, the Yakima Health District reported the county has received 9,600 doses of the COVID-19 vaccines and administered 4,666. All three local hospitals, Yakima Neighborhood Health Services, the Yakima Valley Farm Workers Clinic and Community Health of Central Washington have received the vaccine, along with several local pharmacies. Tieton Village Drugs is among those pharmacies reporting to the health district.

Kean said the pharmacy began administering vaccines last week, and by this Friday will have administered nearly 300 vaccines to long-term care center workers and residents, and local health workers by appointment. So far, Tieton Village has focused mostly on the Yakima area. But Kean said they expected to administer more at facilities in the Lower Valley in the near future.

Vaccines also are distributed at long-term care facilities through a federal pharmacy partnership, which is not reported to the health district as of yet. In late December, Landmark Care in Yakima became the first long-term care facility in the Yakima Valley to receive the vaccine during a pop-up clinic set up by Walgreens, which is part of the federal program. Other facilities have received doses through federal partner pharmacies since.