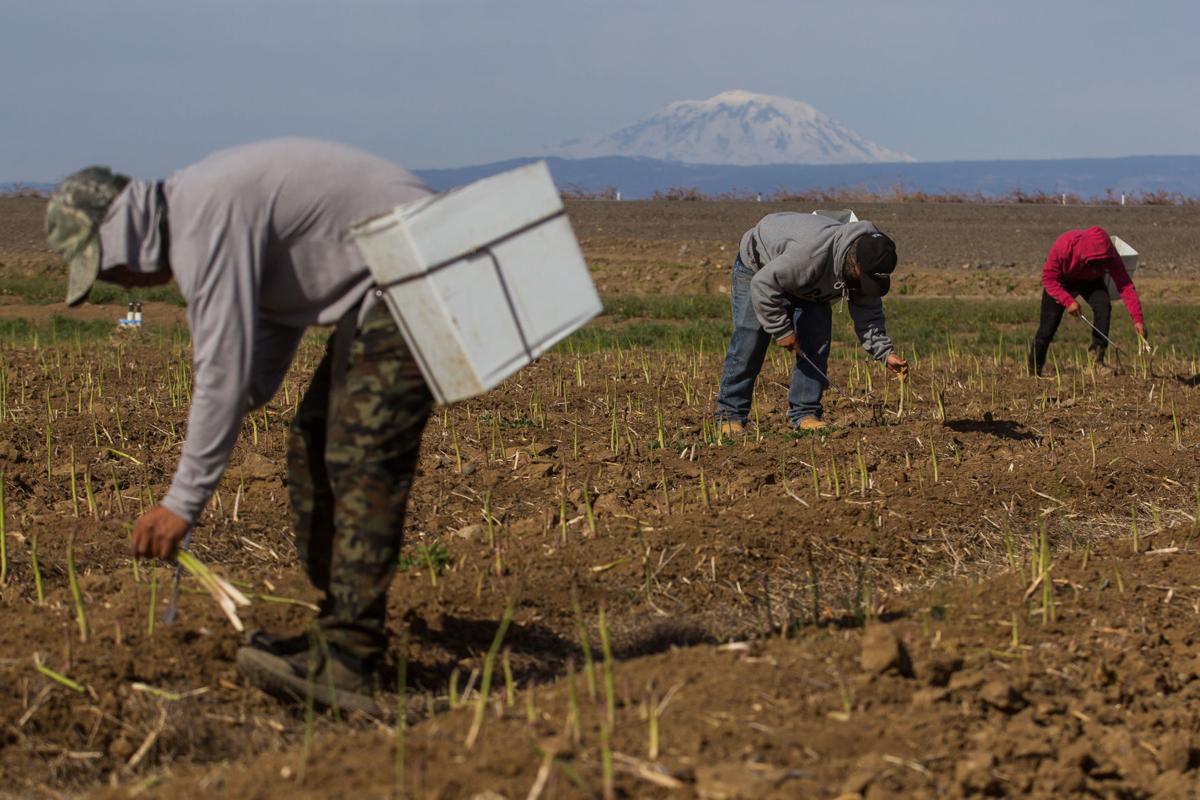 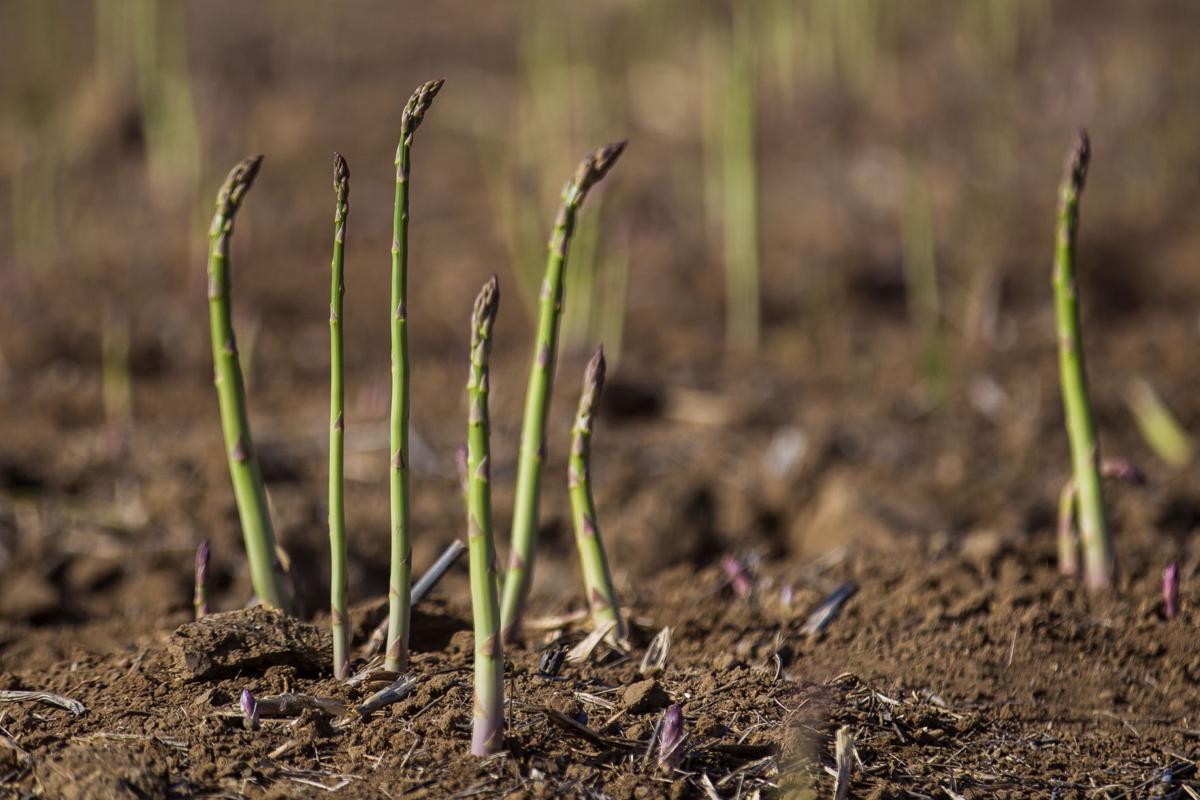 Asparagus is seen on a field Friday, April 23, 2021, at Imperial’s Garden in Wapato, Wash. 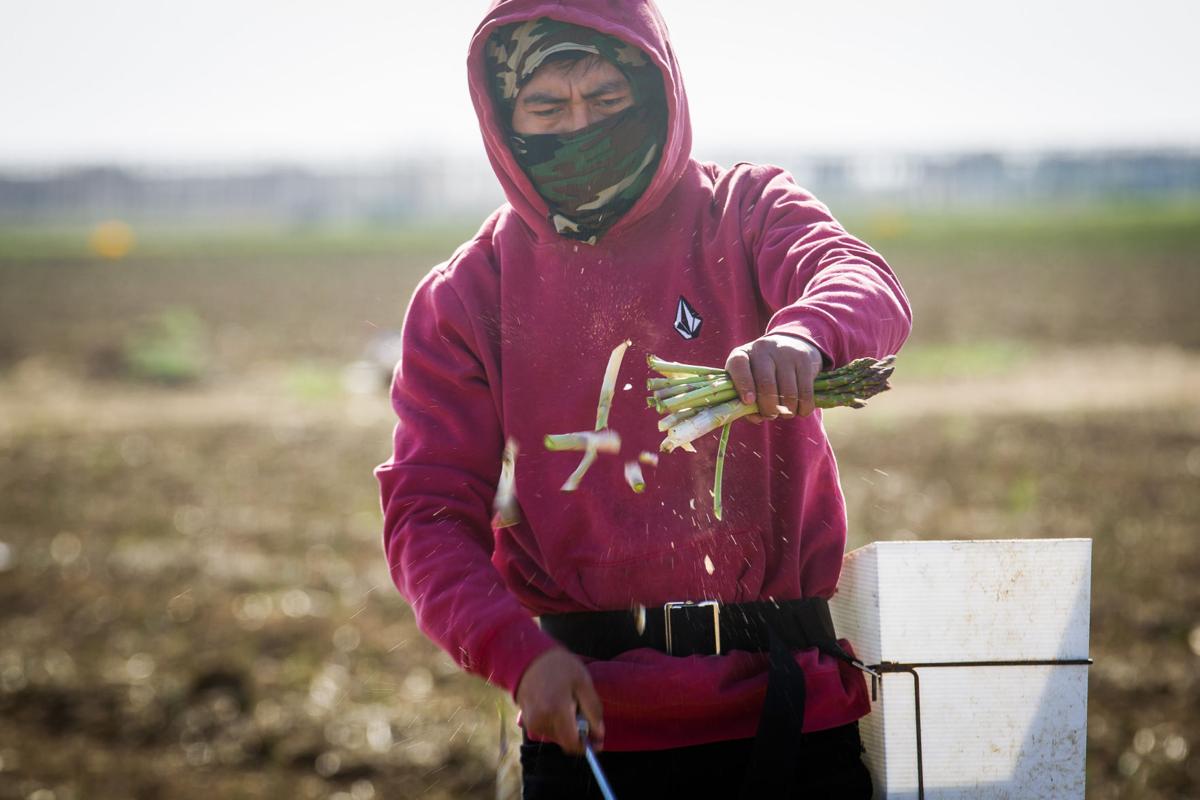 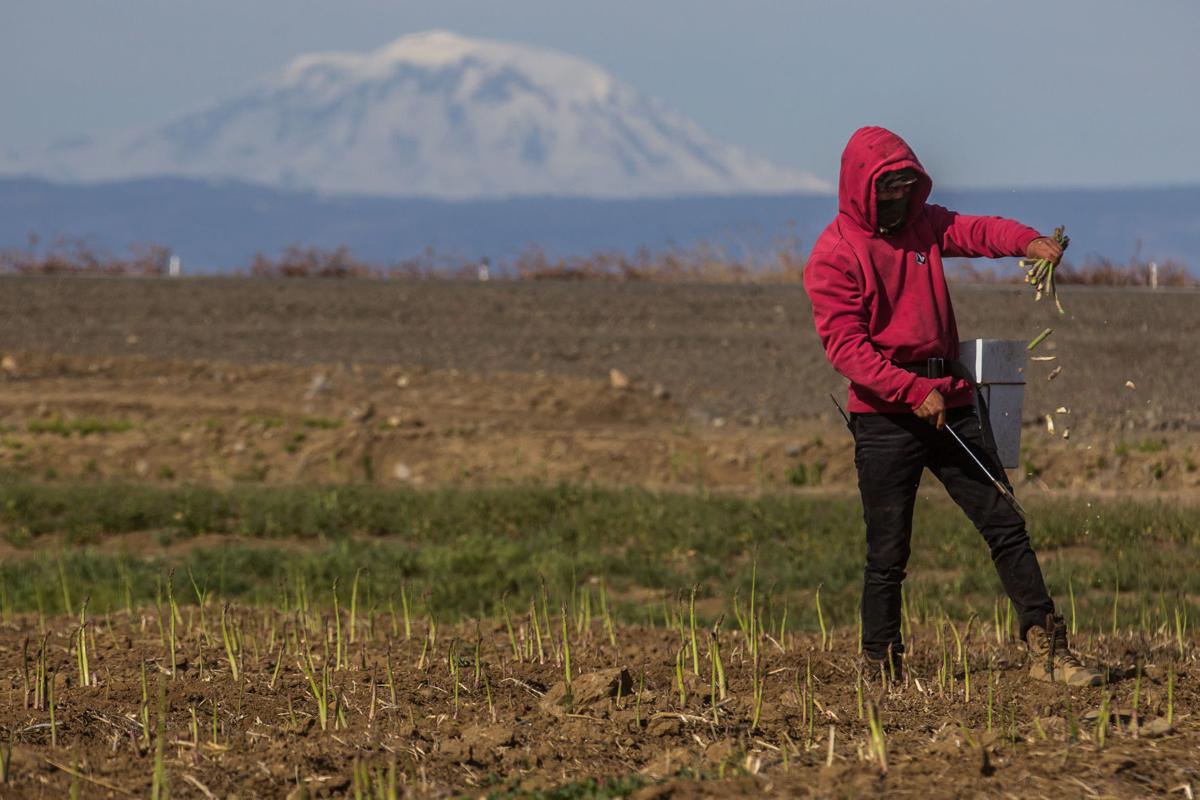 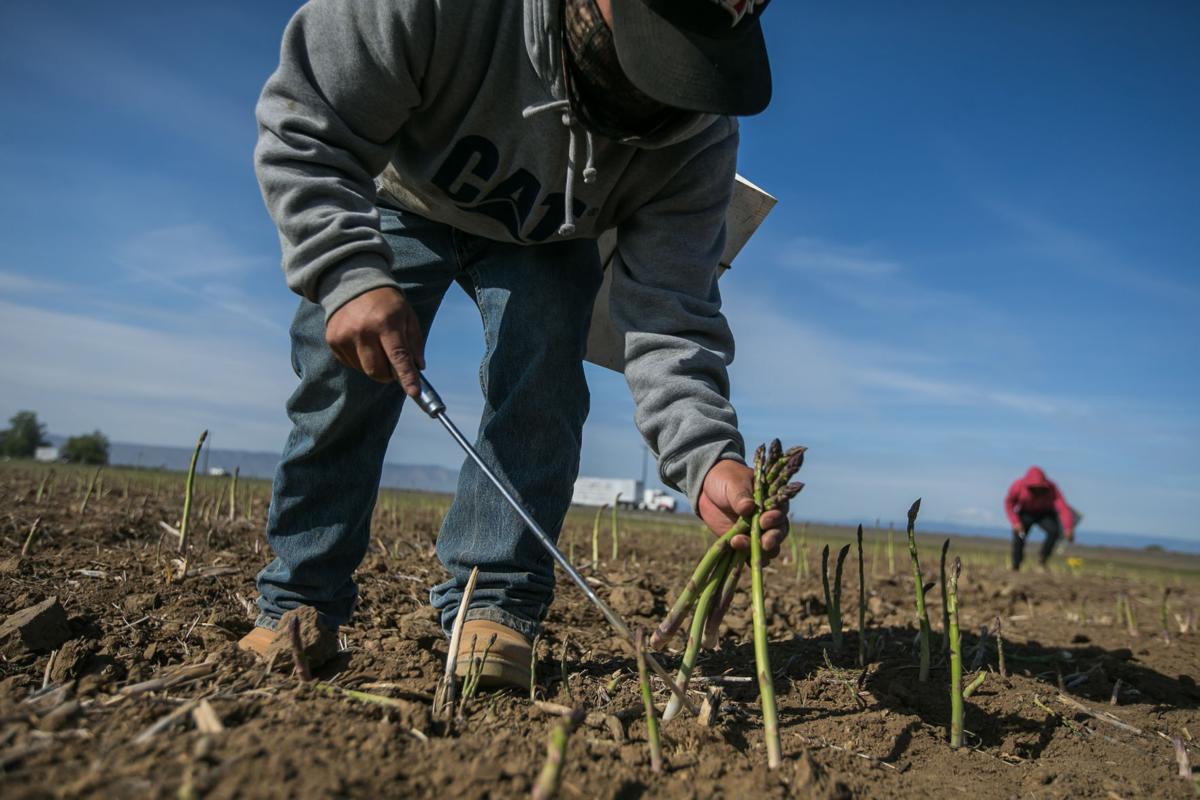 Asparagus is seen on a field Friday, April 23, 2021, at Imperial’s Garden in Wapato, Wash.

In December 2016, Jose Martinez-Cuevas and Patricia Aguilar sued their former Yakima Valley employer, DeRuyter Brothers Dairy, with the hopes of receiving payment for what they claimed were unpaid rest breaks, meal periods and overtime wages for themselves and their co-workers.

They and farmworker advocates also wanted to reach a long-term objective: To end a decades-old provision in the state’s minimum-wage law that made agricultural workers ineligible for overtime pay.

Nearly five years later, that goal is within sight. Gov. Jay Inslee is expected to sign Senate Bill 5172 into law. Under the bill, which passed both chambers of the Legislature with bipartisan support, all agricultural workers will start receiving overtime pay in 2022 and have a 40-hour workweek by early 2024.

The bill’s passage comes months after the Washington Supreme Court ruled that the overtime exemption for dairy workers violated the state Constitution. The bill removes that exemption for all agricultural workers, not just dairy workers, who have been paid overtime since the court ruling.

Farmworker advocates say the bill is another step toward ending decades of inequality, as that workforce is overwhelmingly made up of people of color.

“Just thinking back to the second-class citizenship that farmworkers (had) and the way they’ve been treated — (the bill) is a step to ending that,” said Edgar Franks, political and campaign director for Familias Unidas por la Justicia. The farmworkers union in Burlington has aided Yakima Valley agricultural workers in organization efforts.

The changes will be significant for growers. The agriculture industry, including small, family-owned farms, must grapple with a system that has used the overtime exemption to maintain affordability for consumers and provide profitability to growers.

He testified during hearings about the bill, stating the difficulty of absorbing additional costs when the income he receives for his product has not proportionally increased.

“I don’t mind paying overtime if I can get more money out of my product,” Imperial said.

Agriculture industry officials hope for future tweaks that would provide additional relief to growers, such as a seasonality provision to give growers a higher hourly threshold for overtime during peak harvest periods. They were happy to get some industry provisions, such as a three-year phase-in period and protection from retroactive overtime claims.

“There will be an opportunity to keep talking about (a seasonality exemption) in the phase-in period,” said Jon DeVaney, president of the Washington State Tree Fruit Association.

Farmworker advocates, however, are wary of anything that would erode protections for farmworkers.

“At the end of the day, overtime is a health and safety protection,” said Elizabeth Strater, director of strategic campaigns for United Farm Workers, a union that represents farmworkers, including several units in Washington state.

The union has pushed for policies to increase equity for farmworkers.

“The human body is not meant to endure limitless hours of work,” she said. “Especially work that is grueling and backbreaking. In the end, this is a moral question. With this bill passing with such strong support, it’s a moral referendum whether farmworkers deserve equity.”

Advocates put decades of effort into pushing for the end of the overtime exemption for agriculture workers, a policy they say is rooted in racial inequity.

The tendency to exclude farmworkers from overtime wages at the federal level dates to the 1930s, when the agricultural workforce was primarily Black, Strater said

Now, most farmworkers come from Mexico and other Latin American countries, said Carlos Gil, a professor emeritus of history at the University of Washington. Many hailed from countries that paid even less and were simply happy to receive any pay increase.

“I think that has made it difficult for farmworkers themselves to demand proper treatment,” Gil said.

The overtime exemption at the state level dates back to the minimum wage law passed in 1959. That law requires workers to earn overtime pay for any time worked above 40 hours each week, but provided exemptions for several industries, including agriculture.

For decades, that exemption was the law.

But that’s started to change as critical allies, namely unions and advocacy groups, have helped bring farmworker issues to light. That’s led to several key rulings, including a 2015 state Supreme Court ruling that required farmworkers to be paid separately for rest breaks from what they earn on a piece-rate basis.

That case stemmed from a class-action lawsuit against Sakuma Bros. Farms, a berry farm in Skagit County, by two farmworkers in 2013.

Franks, the political and campaign director for Familias Unidas por la Justicia, represents berry workers, including those involved in the rest-breaks case.

Franks said support for policies that promote equity grew during the pandemic, with workers voicing concern about COVID-19 protections and protests over racial inequity happening nationwide.

As a result, he believes there was an appetite in the Legislature for any bill that would address racial injustice.

“There has been a series of events building up to this,” Franks said.

Gil of the University of Washington said the next step is making sure the legislation is enforced as written when the first phase of the bill goes into effect next year.

Farmworkers are “not all the same, and they don’t all demand the proper treatment and proper pay,” Gil said. “They don’t have the self-assertion of being able to confront a farm employer to do right by the law.”

Strater of United Farm Workers said the union’s focus is to ensure that workers know how the new law works and their rights. Making sure that the employers understand the new provisions will also be crucial.

“There’s going to be a period of time workers simply don’t know the specifics,” she said. “You’re dealing with a population less empowered to complain.”

But some in the agriculture industry say executing the overtime law might not achieve what farmworkers and their advocates have been seeking.

DeVaney of the Washington State Tree Fruit Association said that growers, especially smaller ones, will likely not have the means to afford the additional cost and would probably choose to keep workers’ hours under the overtime threshold.

“Will you actually end up seeing increased hours and pay for workers, or will you see workers moving between employers?” he asked. “Will this be a benefit to them or a reduction (of hours)?”

Growers of certain commodities, such as apples and cherries, will also have to incorporate overtime into their pay systems — workers are primarily paid a piece rate, such as by the bin or pound.

Des O’Rourke of Belrose Inc., a Pullman firm that examines the world apple market, said agricultural producers, including those producing tree fruit, have already dealt with rising costs and additional expenses because of COVID-19 restrictions.

While producers are getting more money for cherries, other fruits and vegetables haven’t seen similar increases. As a result, growers can’t easily absorb additional expenses.

That could have bigger ramifications for the industry. O’Rourke said agricultural producers will likely be further consolidated into larger operations that can better absorb additional labor costs.

“Those who tend to have the power dictate the terms,” he said. “The two alternatives for that frustration is to live with limited margins or get out of the business.”

Some of those changes are already visible. Imperial, the Wapato vegetable grower, said it’s already been difficult to compete with other countries that grow items at a lower cost, such as asparagus and zucchini.

Imperial said he’s been worried whether he can financially sustain the farm operation, which his family has run for nearly four decades.

He said he’s contemplated reducing worker hours so the overtime threshold doesn’t kick in, which may require him to reduce the size of his farm or the products he grows.

“I wish our legislators can figure out some way, a compromise,” he said. “Yes, we would like to pay more to the workers, but we need help to get our product to where we can get paid more to sustain my farm.”

Franks of Familias Unidas said he certainly doesn’t want small farms to go out of business due to the overtime provision, and their success is essential for the state’s economy. However, he also questions why keeping agriculture financially sustainable depends on depriving workers of overtime pay nonagricultural workers have long received.

He believes the industry can tap into the same market as those who like organic produce, a customer base generally willing to pay more for sustainably grown food.

“I don’t think we can accept that argument that we have to keep workers poor so consumers can pay less for an apple, pear or cherry,” he said. “I think consumers want more product that is grown in the most sustainable and humane matter.”

From lawsuit to legislation: How overtime for Washington farmworkers happened

A landmark court case against a Lower Yakima Valley dairy has led to significant changes for agricultural workers and employers in Washington state.