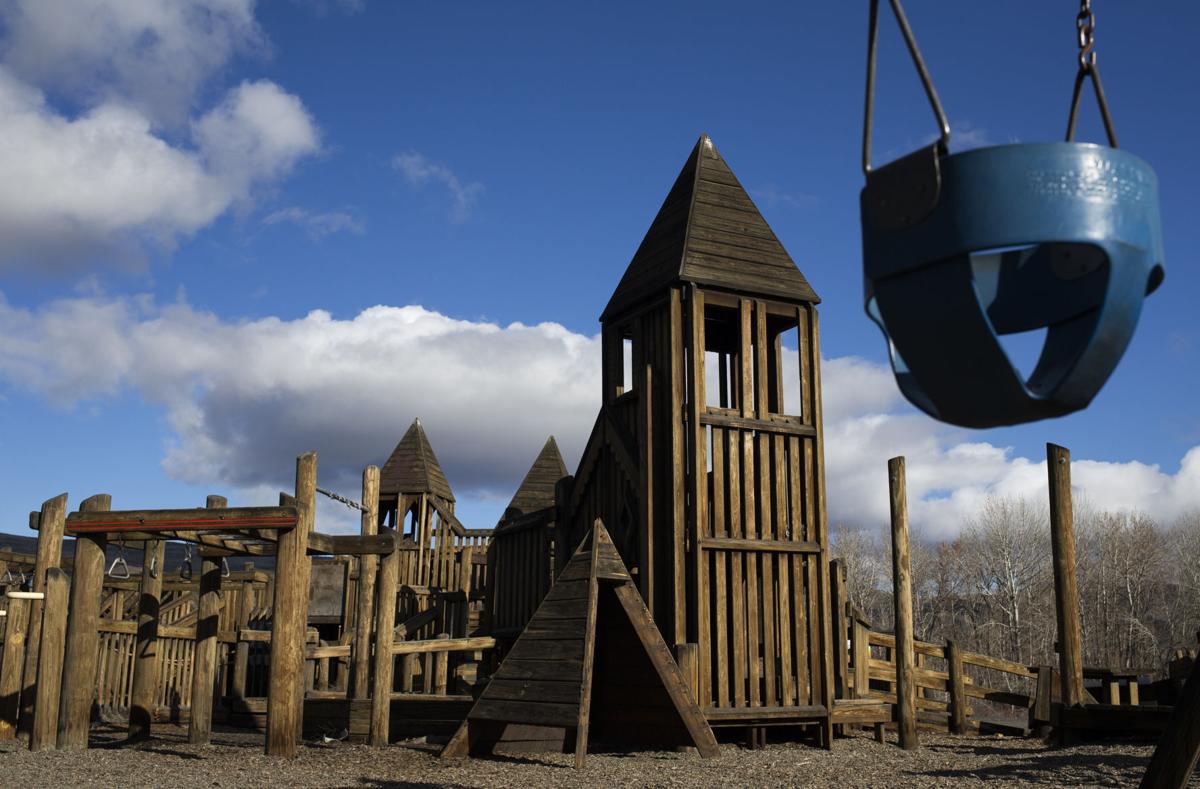 The existing play structures at McGuire Community Playground are pictured on Wednesday, Feb. 3, 2021, in Yakima, Wash. The structures will be torn down this month so construction can be begin on a new playground. 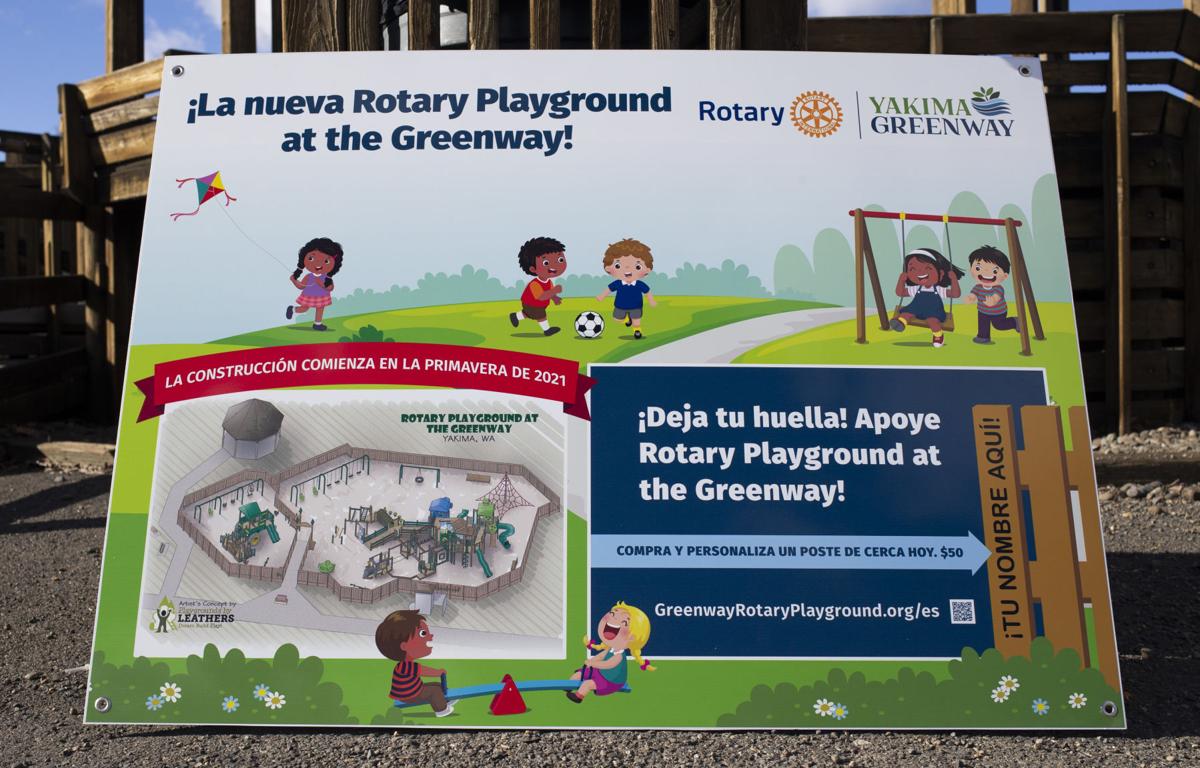 A sign advertises the new playground along with a rendering of the design on Wednesday, Feb. 3, 2021, at McGuire Community Playground in Yakima, Wash. 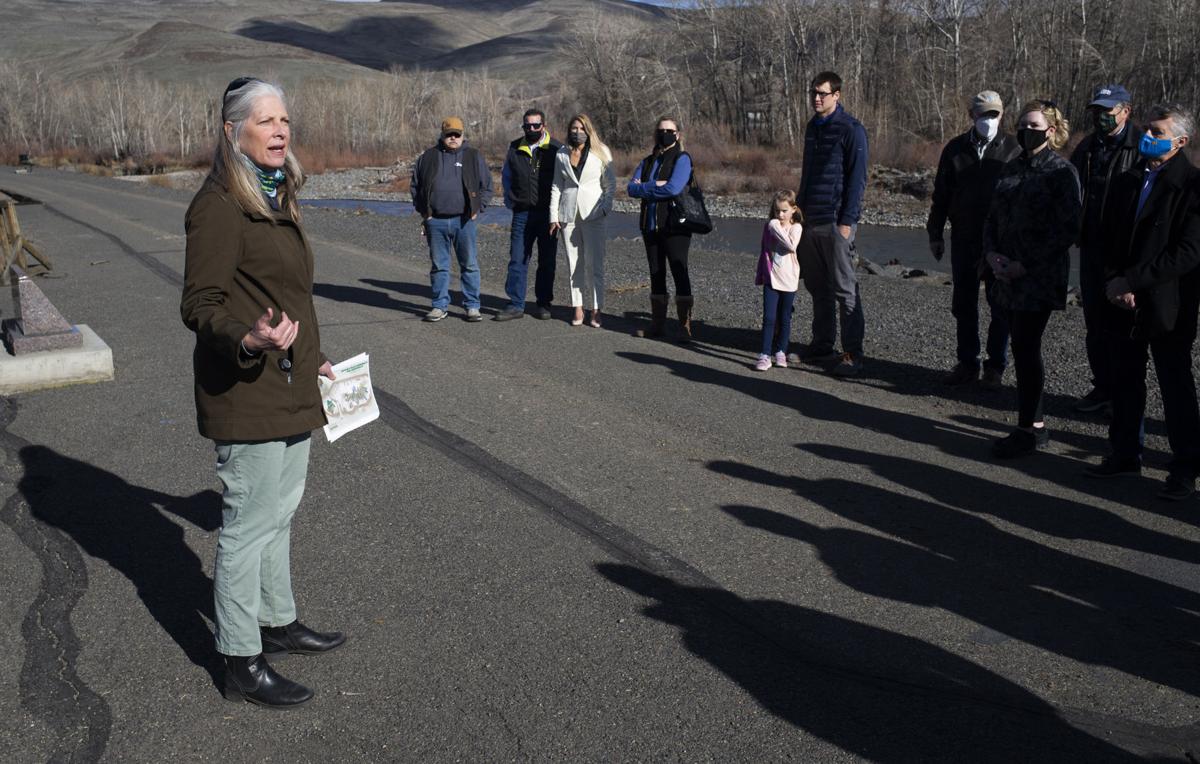 Kellie Connaughton, executive director of Yakima Greenway, speaks to a gathered crowd about the future of McGuire Community Playground on Wednesday, Feb. 3, 2021, in Yakima, Wash. 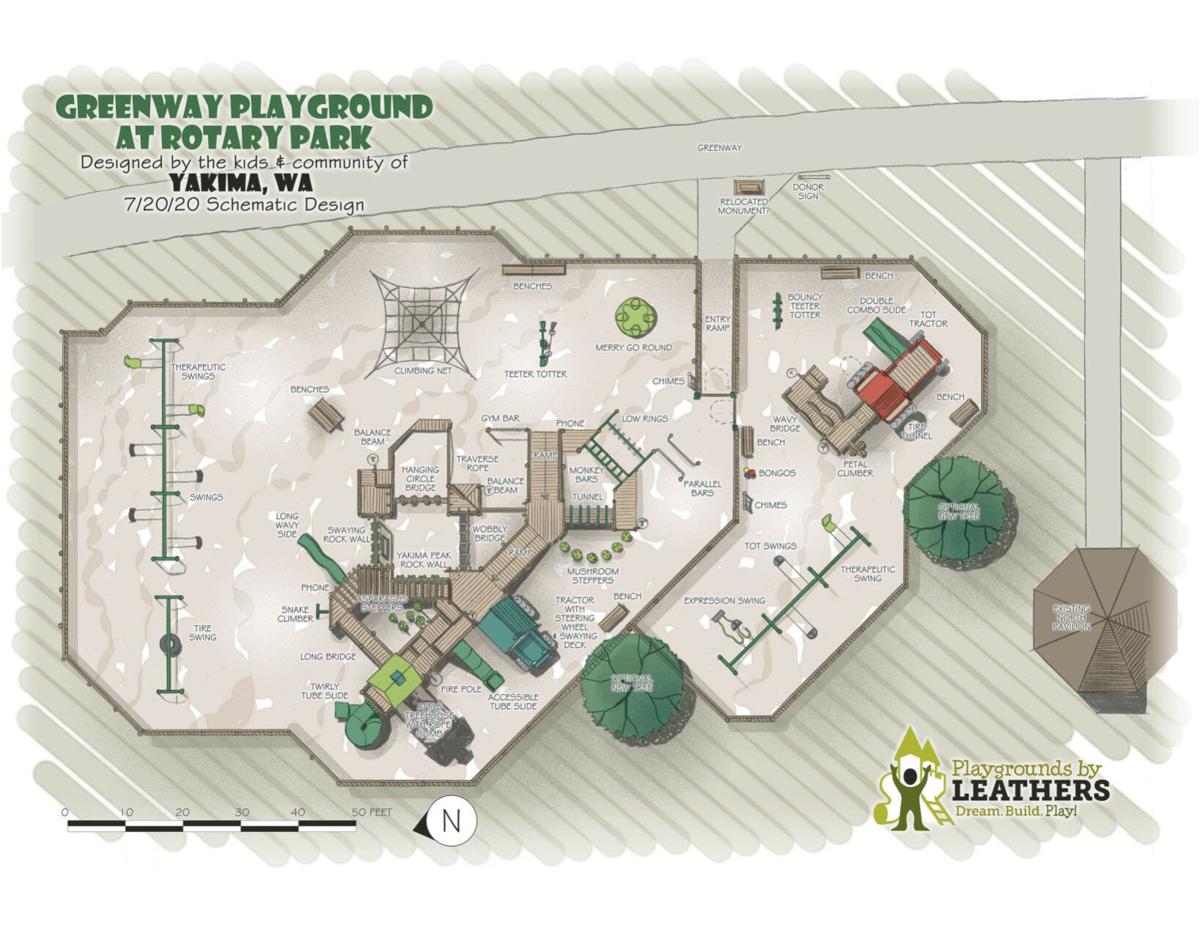 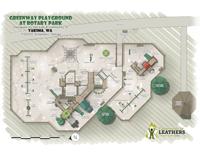 A rendering of the future Rotary Playground at the Greenway by Playgrounds by Leathers.

The existing play structures at McGuire Community Playground are pictured on Wednesday, Feb. 3, 2021, in Yakima, Wash. The structures will be torn down this month so construction can be begin on a new playground.

A sign advertises the new playground along with a rendering of the design on Wednesday, Feb. 3, 2021, at McGuire Community Playground in Yakima, Wash.

Kellie Connaughton, executive director of Yakima Greenway, speaks to a gathered crowd about the future of McGuire Community Playground on Wednesday, Feb. 3, 2021, in Yakima, Wash.

A rendering of the future Rotary Playground at the Greenway by Playgrounds by Leathers.

Wednesday was just the kind of day that brings people to the Yakima Greenway and its popular Sunrise Rotary Park McGuire Community Playground.

A bright winter sun warmed about 30 adults and a few kids standing near the elaborate wooden structure, which was built by community volunteers and dedicated in May 1994. They were saying goodbye to the beloved playground as they learned about its replacement.

“It’s our hope that we create something that’s going to last for another 30-40 years,” Greenway Executive Director Kellie Connaughton said of what will be known as the Rotary Playground at the Greenway.

The McGuire Playground will be removed this month, Connaughton said after the ceremony Wednesday. Construction of the Rotary Playground at the Greenway is set for June 22-27 and will also involve community volunteers.

The new playground will include a climbing net, teeter-totters, several kinds of swings, various slides and bridges, a merry-go-round, a tractor and train, a rock wall labeled Yakima peak, bongos and chimes and mushroom and asparagus steppers, among other features. The overall playground structure will be built with materials made from recycled milk jugs.

Greenway officials have been working with Yakima’s three Rotary clubs — Sunrise Rotary, Downtown Rotary and Southwest Rotary — on the playground within Sunrise Rotary Park. Each club is contributing $50,000, along with $10,000 from Rotary District 5060 and $240,000 from the Yakima Rotary Trust.

“It only made sense that all the Rotary clubs of Yakima including Downtown Rotary, Sunrise Rotary, Southwest Rotary and the Yakima Rotary Trust would partner to rebuild it,” said Jennifer Bliesner, president of Downtown Yakima Rotary Club. Members wanted to create a welcoming destination that encourages healthy play and exercise in their community, she said.

Additional funding will be raised for improvements to the area, Connaughton said, for an estimated total of about $500,000. They will include more picnic shelters, a new pit toilet and other features such as a space for food vendors. Eventually, the park around the playground will tie into Yakima County’s East-West Corridor

A fence post fundraising campaign will help finance the park additions. “We decided we wanted to secure all the original picket fence posts” purchased and personalized for the McGuire playground, Connaughton said. Those fence posts will be available “so they can pick up old fence posts and buy a new one.”

Members of the Sunrise Rotary Club, with substantial assistance from the McGuire family, McGuire Lumber and area Lions Clubs, led efforts to build the McGuire playground at a cost of $60,000.

Sunrise member Dr. Mark Uhlman was vacationing in Colorado Springs, Colo., in 1992 when he came across what seemed the perfect playground solution designed by Robert Leathers and Associates of Ithaca, New York.

“The club wanted to make an impact in Yakima,” Uhlman said Wednesday as he stood with Terry McGuire. “One day Terry McGuire said, ‘We’d like to honor our parents, grandparents. ... I brought (this) back to Terry and he said, ‘Let’s do it.’”

McGuire got the board of directors of McGuire Lumber together and project supporters contacted the company that fall. About a year later, company representative Dan Burgevin gave presentations to five Yakima-area schools, incorporating students’ ideas into the final design. More than 2,200 volunteers donated around 15,000 hours in creating the playground.

Rotary Club members contacted the original designers about building a new playground. Though Leathers wanted input from area schoolchildren, the COVID-19 pandemic posed challenges. In cooperation with the Greenway, more than 1,000 design letters were sent to various elementary schools. More than 100 drawings came in response and went to Leathers for the design phase, according to a news release.

Jim Houghton and Kyle Cundy of Leathers took ideas from 60 to 70 of the drawings for the final design. The playground has an agricultural theme reflecting the Yakima Valley’s bounty.

It will draw locals and visitors to an already popular location in Yakima, Streich said.

“We know that the new, modern and safe playground structure will be enjoyed and used by countless children and families for years to come,” he said. “We believe that having safe and fun places for families to congregate helps to make our city and community a vibrant and welcoming place to live and play.”

It’s sad to see the removal of the existing playground that has been part of the community for more than 26 years, Price-Scott said. But the modernization of the playground will allow new generations of children to enjoy it for many more years.

The playground materials will be coming from Chicago, said Connaughton, who was half-serious in cheerfully asking for anyone with a couple big rigs to transport them. That’s not an immediate concern, though.

“The next big project is recruiting volunteers,” she said.

The new Rotary Playground at the Greenway is scheduled to be built by community members from June 22-27. Those who want to volunteer should call the Yakima Greenway office at 509-453-8280. Visit www.yakimagreenway.org for more information.

To buy and personalize a fence post for the new playground, or to donate in other ways, visit www.yakimagreenway.org.

There has always been a soft spot in Eric Silvers’ heart for Martin Luther King Jr. Park.