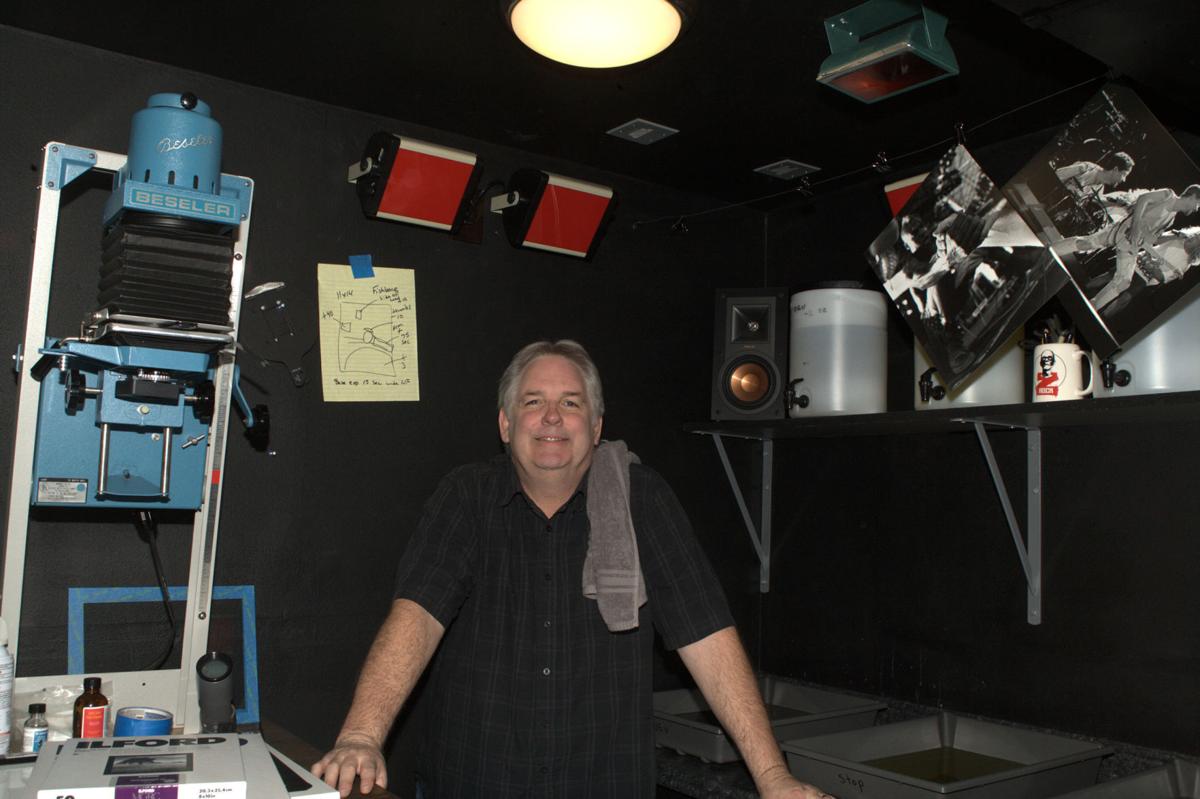 Darren Balch poses for a portrait in a darkroom. “To me, a film negative is a piece of sheet music and the final print is the performance. Black and white tones are audible to me. When the paper is exposed, the darkroom is completely quiet. No vibrations at all. Upon placing the exposed paper into the developer, the music is tuned up to 10 in order to provide the required agitation.” 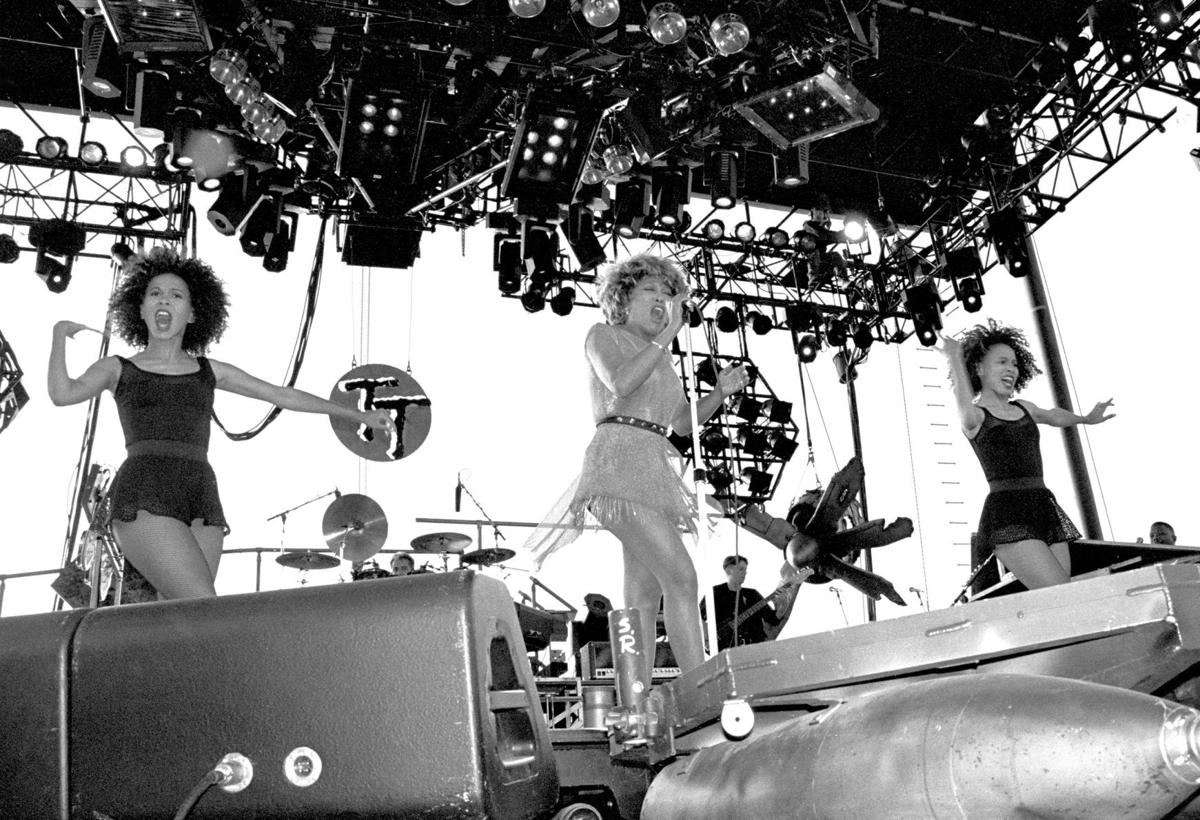 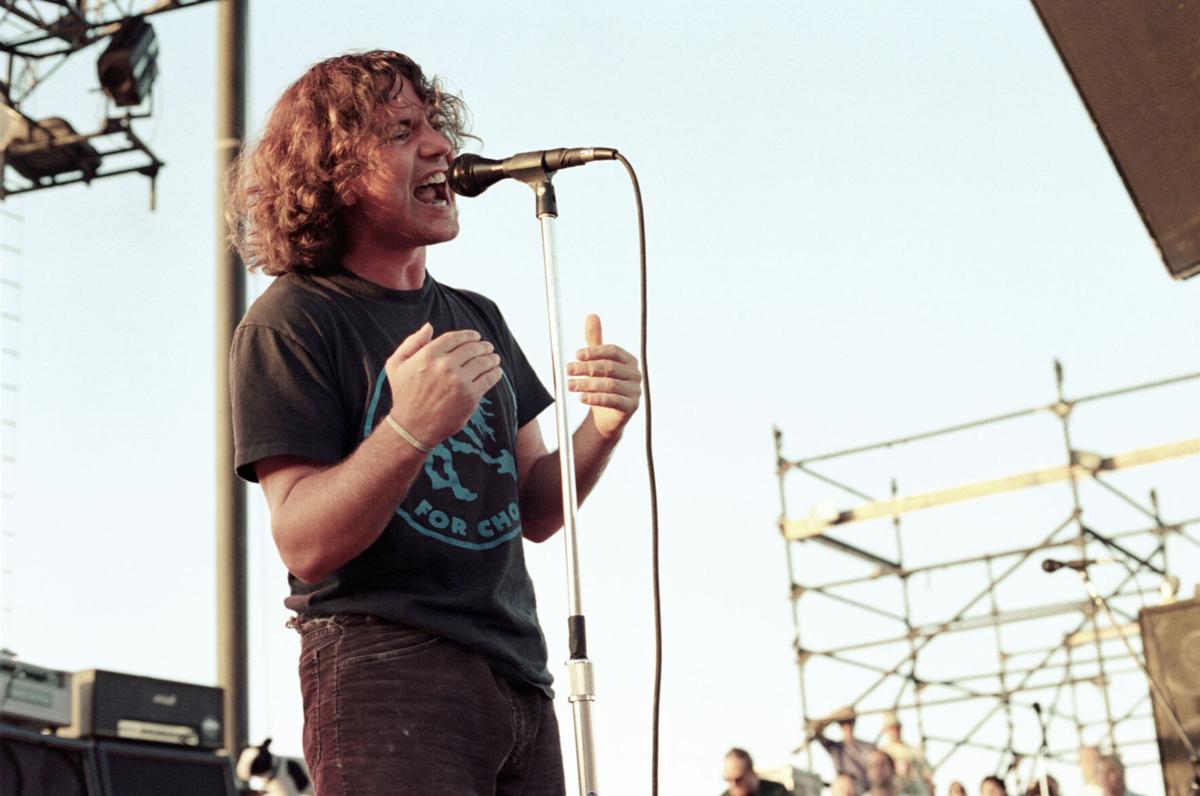 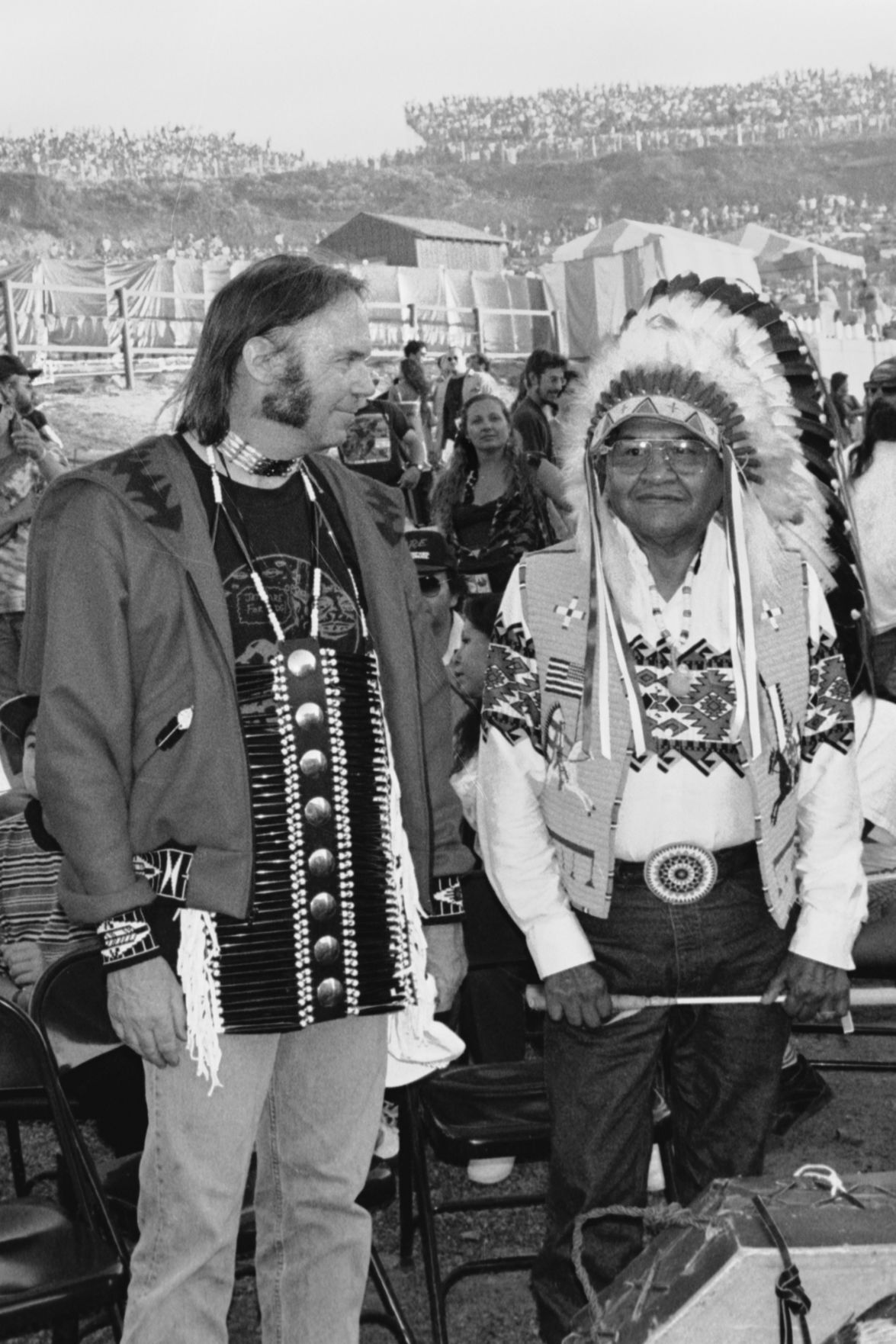 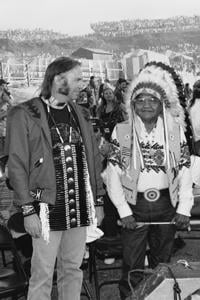 Photographer Darren Balch photographs Neil Young, left, and Leander George sharing a smile after a drum circle before a show at The Gorge Amphitheatre. 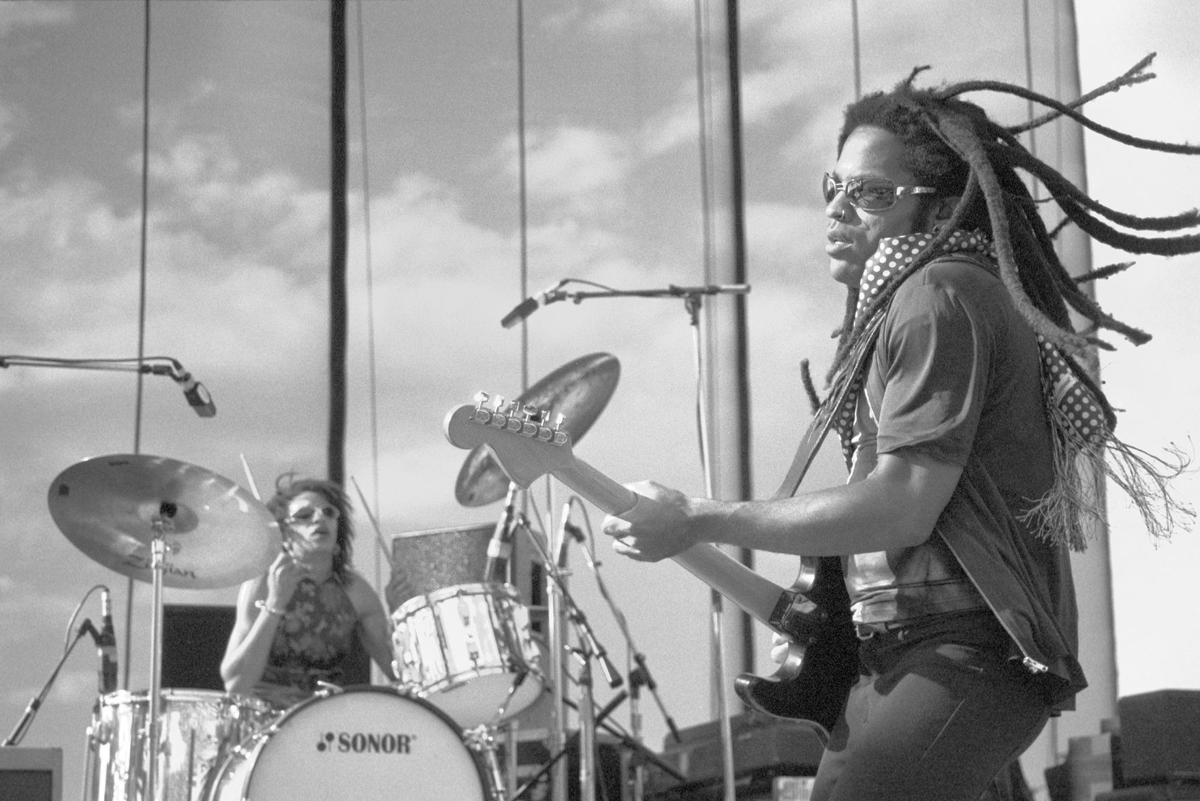 Photographer Darren Balch photographs Lenny Kravitz as he performs at The Gorge Amphitheatre. 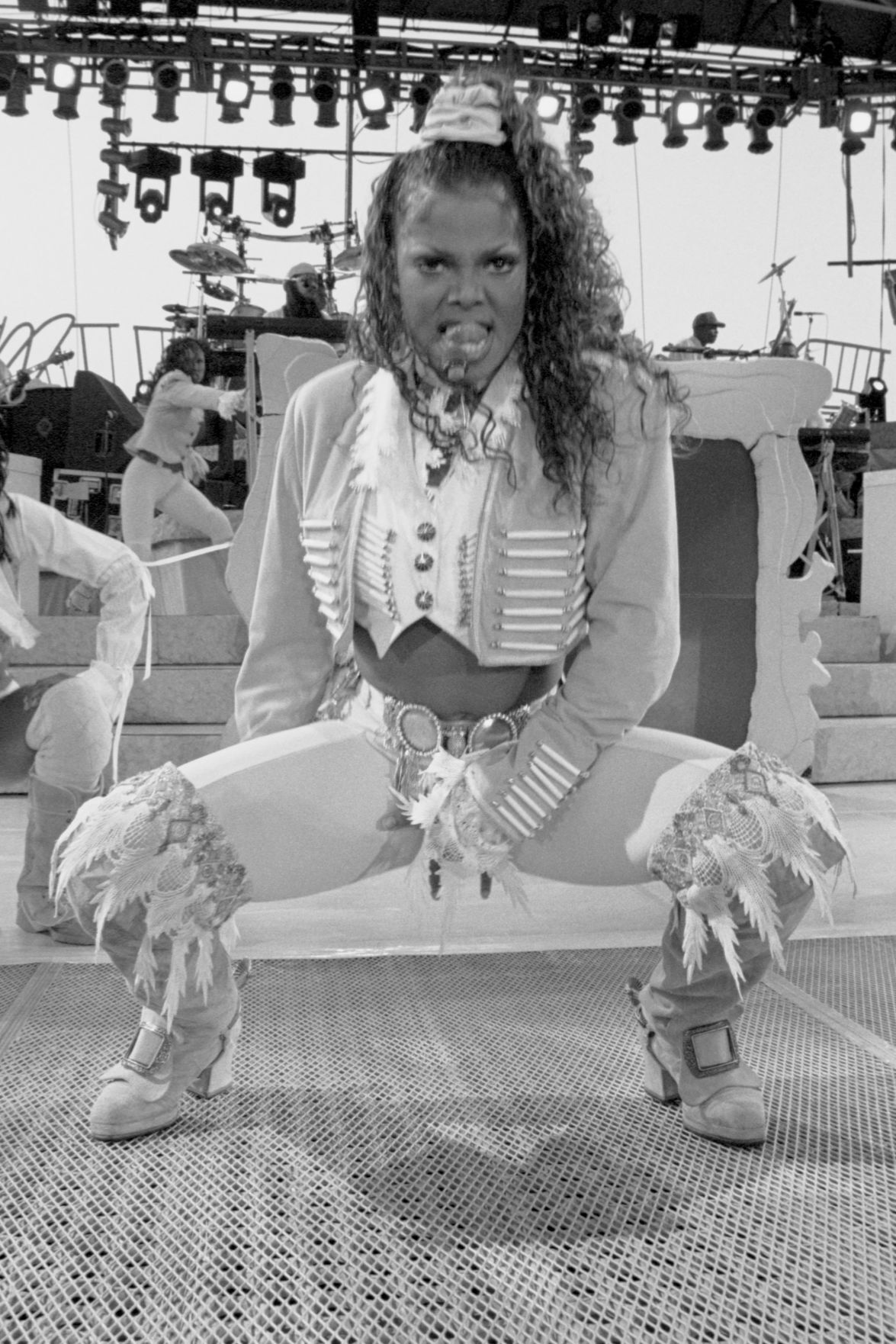 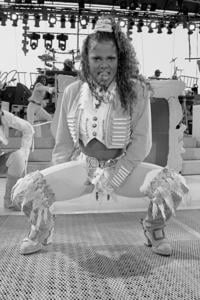 Photographer Darren Balch photographs Janet Jackson as she performs at The Gorge Amphitheatre. 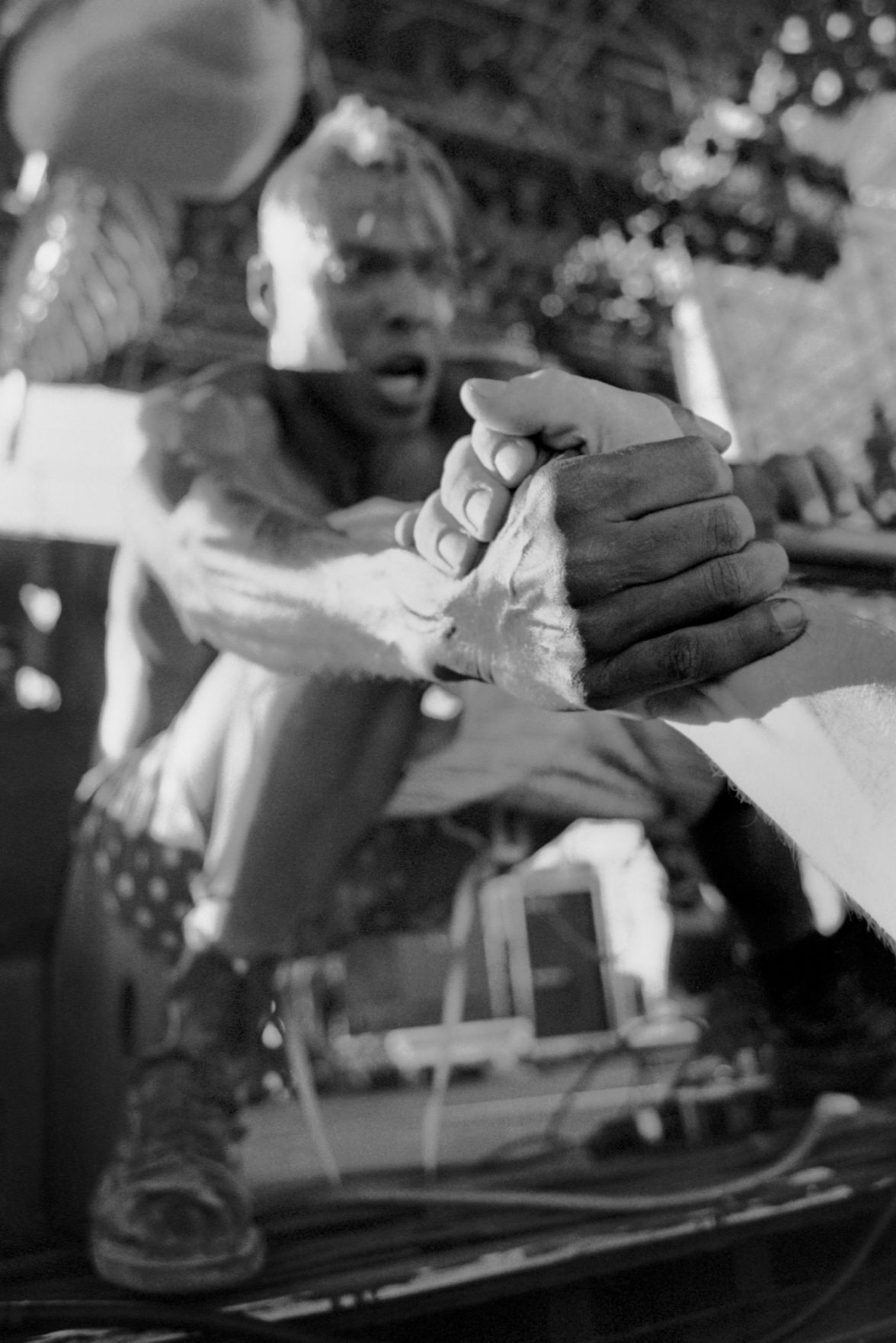 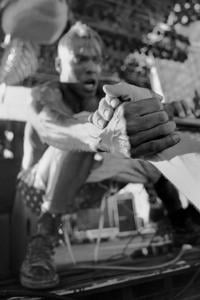 Photographer Darren Balch photographs Fishbone’s Angelo Moore pulling a person from the crowd onstage during a performance at The Gorge Amphitheatre.

Darren Balch poses for a portrait in a darkroom. “To me, a film negative is a piece of sheet music and the final print is the performance. Black and white tones are audible to me. When the paper is exposed, the darkroom is completely quiet. No vibrations at all. Upon placing the exposed paper into the developer, the music is tuned up to 10 in order to provide the required agitation.”

Photographer Darren Balch photographs Neil Young, left, and Leander George sharing a smile after a drum circle before a show at The Gorge Amphitheatre.

Photographer Darren Balch photographs Lenny Kravitz as he performs at The Gorge Amphitheatre.

Photographer Darren Balch photographs Janet Jackson as she performs at The Gorge Amphitheatre.

Photographer Darren Balch photographs Fishbone’s Angelo Moore pulling a person from the crowd onstage during a performance at The Gorge Amphitheatre.

Among the photos Darren Balch chose for his new book is one of Janet Jackson performing at The Gorge Amphitheatre in 1994. She’s looking directly at the camera as she gestures provocatively.

“She broke choreography and crawled right up to me. It was just one shot, one frame,” said Balch, the first house photographer for the George, venue. “That’s Janet at her salacious best. Boys II Men opened up for her and they were phenomenal.”

As a photographer at The Gorge from 1993-95, Balch got close to all kinds of performers. Maynard James Keenan of Tool offered him a beer. He met Tina Turner and her crew. He captured Geoff Tate in leather shorts and Robert Plant in plaid shorts, pioneering female rapper MC Lyte and guitar legends B.B. King and Eddie Van Halen.

The recent publication of “Rock & Roll On Columbia: Tall Tales from a Short Attention Span” highlighting Balch’s photography at The Gorge comes with the release of a documentary film that features his work. “Enormous: The Gorge Story” was scheduled for release in April 2020. Delayed by the COVID-19 pandemic, it opens in theaters on Wednesday. “Enormous” will play at Yakima Cinema, 1305 N. 16th Ave., at 7 p.m. Wednesday and Thursday.

Balch lives in Spokane and grew up in Yakima and Pullman. A brother and two sisters live in Yakima, and Balch credits the Yakima and Pullman public school districts for teaching him photography — especially the Yakima School District’s Company 7 Arts Program, which offered students as young as seventh grade the chance to explore their creative passions once a week.

In his time as house photographer at The Gorge, the Seattle music scene exploded. Balch was documenting some of the biggest bands in the world, developing and printing the black-and-white photos in his studio apartment. He slept in alfalfa fields, dodged livestock and saw some crazy scenes, but always worked a full-time job with his role at The Gorge strictly a side gig.

“You have to come home from the circus,” he said.

He realized in 1995 that his schedule wasn’t sustainable and entered the tech industry. Today, the 58-year-old works for Northwest Pump and Equipment, a job he got during the pandemic. He also finished “Rock & Roll On Columbia,” his second book, after years of thinking about it. It likely won’t be his last.

“When people retire, they go fishing or play golf,” Balch said. “All I want to do is work in my photo lab and print photographs and write books.”

Balch likes to say he’s lived a “Forrest Gump lifestyle,” with a variety of jobs in several states, including several years in the military. The adventuresome fictional character comes up a lot in conversation.

Born in Ellensburg, Balch moved as a child to Yakima, where he attended St. Paul Cathedral School, Roosevelt Elementary and Carroll and Davis high schools. Davis, which he attended for a year and a half, was where he got his technical introduction to photography, Balch said.

“As a kid we had a drawer full of Life magazines that I was fascinated by — so much joy and horror in huge full-page pictures; just wonderful stuff,” he said. “View-Master reels, I could look at those things for hours. I loved those things.”

Balch graduated from Pullman High School, where he moved during his junior year while his siblings attended college.

“Growing up my house wasn’t safe, and in a Forrest Gump kind of way that’s all I’ve got to say about that,” he said. “Thank God for my brother and sisters and AM radio.”

The first outdoor concert Balch photographed was a 1981 Fourth of July show at Ahtanum Park in Union Gap. He still has his photos of an unknown band performing on a flatbed trailer. Two months later, Balch was in basic training that began an eight-year military career sampling nuclear debris for the U.S. Air Force.

After being honorably discharged in 1989, Balch returned to Pullman, got a job as a dishwasher at a pizza place and began photographing as many bands as he could. “Working the pizza job was great. I met a ton of people and that’s how I found out about The Gorge,” he said.

Also in 1989, Alice in Chains played the CUB Ballroom on the Washington State University campus. Balch met Layne Staley and started getting to know the security teams for shows. He was the only photographer at most of the shows then, which seems almost unimaginable today.

His gig at The Gorge came as a “complete accident,” Balch said.

In 1993, Balch moved from Pullman to Spokane to start working for The Scene magazine. He also sent some transparencies to Creighton Burke with concert promoter MCA Concerts Northwest. Burke invited him to photograph Tina Turner’s show at The Gorge but warned there wasn’t any money in it. Balch didn’t mind.

“He gave me an access pass” but then said Balch wasn’t needed. Balch sat down on the lawn and waited for the show. About 15 minutes later, Burke rushed up to him. Turner’s manager had asked for the house photographer to shoot a meet-and-greet before her show. Balch photographed the gathering and the show.

“I just kept showing up and every week would make that trip. Twenty weekends that summer, I slept in an alfalfa field. No problem,” he said.

His persistent and dedication to his craft comes across in his photos. In a foreword, Jason Olcott — who describes himself as an editor, fan and friend — offered his take on Balch’s images.

“When your eyes lock on to one of his prints, you’re transported,” Olcott wrote. “You feel the heat, taste the sweat, know the joy.”

Balch doesn’t have any “weird crazy meltdown rock ‘n’ roll stories” from more than 20 years of photographing bands and performers. “Everybody was very kind. I didn’t run into anybody who was a jerk,” he said. Then again, “I didn’t spend an inordinate amount of time with anybody.

“What I learned in my photo class in Pullman is to ask, ‘Would you give me a photograph’? Don’t use ‘take,’” Balch said. “I just didn’t stick a camera in somebody’s face and go paparazzi with them. There was a known quantity of respect.”

That really came into play when Neil Young performed with Pearl Jam in September 1993, a legendary show that’s the subject of a recent Rolling Stone article on the release of “Enormous.” Some Yakama Nation citizens held a drum circle in the backstage area.

“I ditched the camera. ... That’s a prayer, not a performance,” Balch said. Afterward, he took photos of Young with others, including Yakama Tribal Council member Leander George. Balch included his picture of Young and George in his first book, “Virtually Onstage.”

Balch dedicated “Rock & Roll On Columbia” to his wife, Kathy Morgan. “For that first date at The Gorge, and all the years together in the front car riding the roller coaster of life,” he wrote.

The met in a bus on the way to Lollapalooza at The Gorge in 1995 and their first date was a Live performance in 1997. It was also the last show Balch photographed at The Gorge.

From the time he first saw Van Halen in concert in 1981, Balch wanted to photograph music. He’s glad he could.

“I never looked at it as photographing people,” he said. “It was the music flowing through them.”

Buy his books and learn more about Darren Balch at https://www.virtuallyonstage.net.