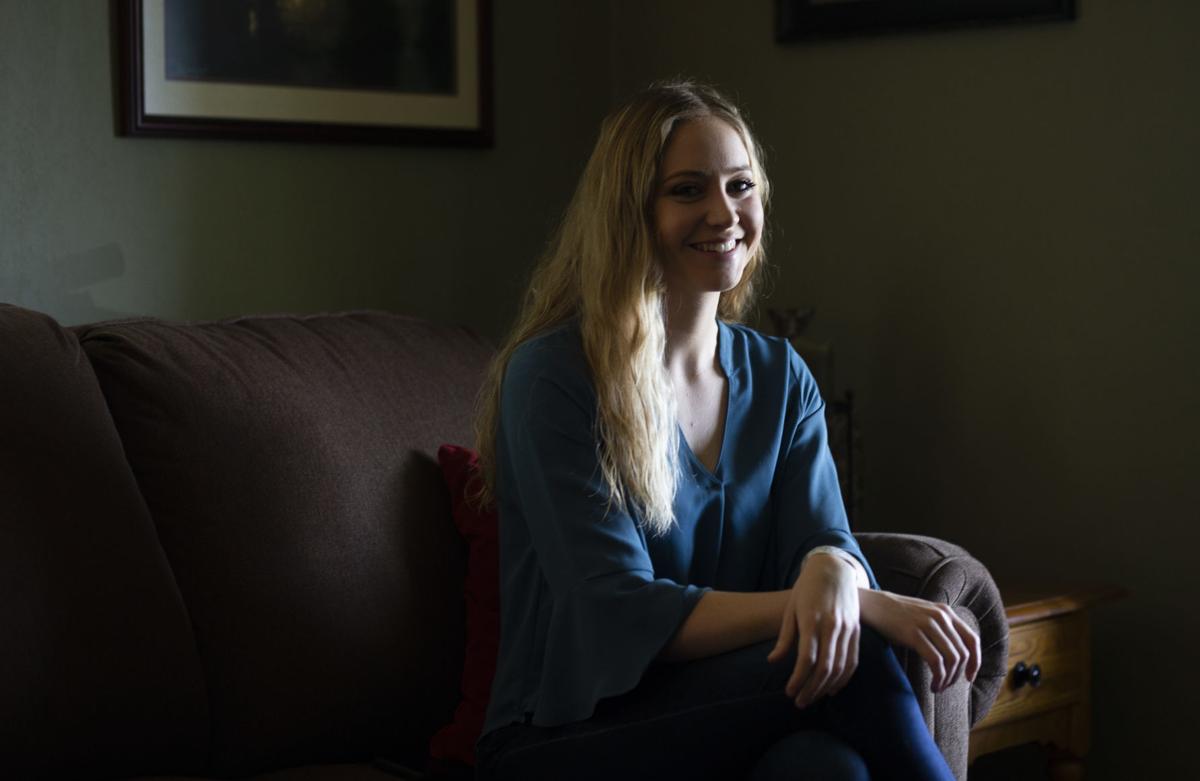 Maddie Gamache is pictured on Thursday, May 23, 2019, in Moxee Gamache went to Texas to donate bone marrow Monday for the second time through Be The Match. 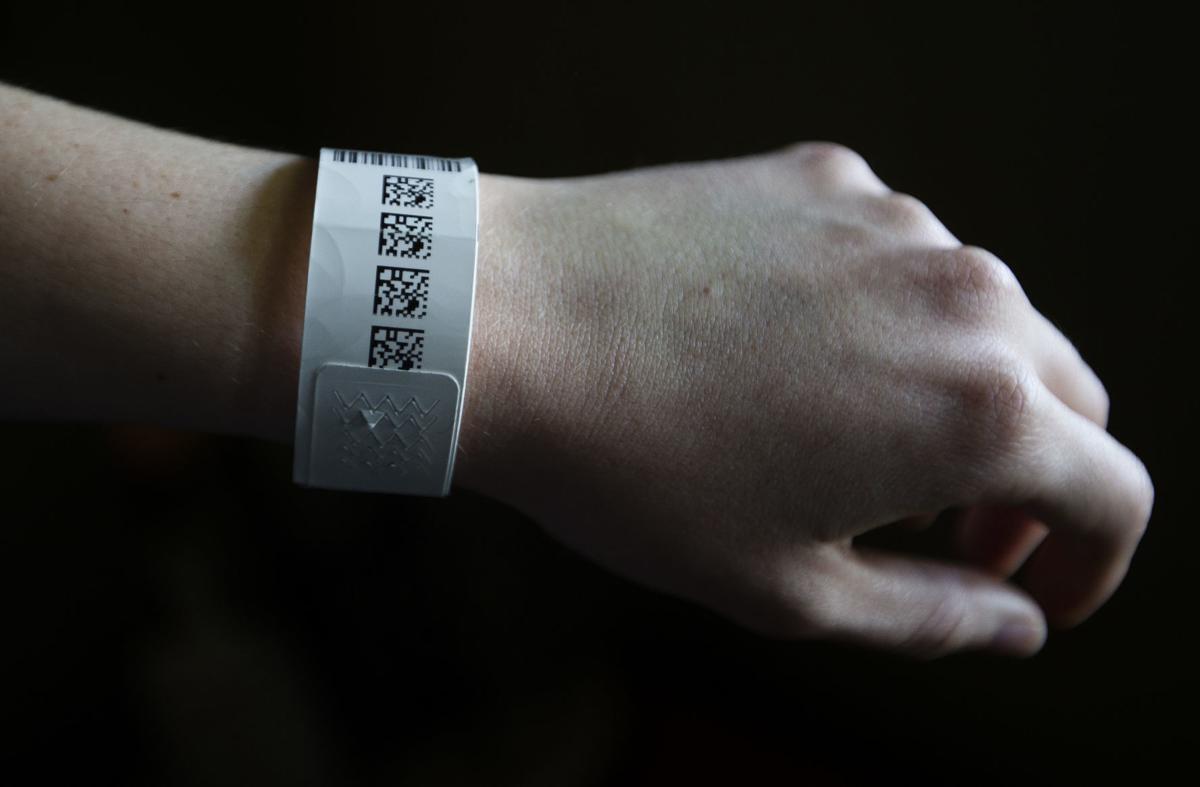 Maddie Gamache shows her hospital wristband Thursday in Moxee following her bone marrow donation in Texas earlier in the week .

Maddie Gamache is pictured on Thursday, May 23, 2019, in Moxee Gamache went to Texas to donate bone marrow Monday for the second time through Be The Match.

Maddie Gamache shows her hospital wristband Thursday in Moxee following her bone marrow donation in Texas earlier in the week .

MOXEE — In November 2017, Maddie Gamache received a thank-you card from someone she had never met.

“From the bottom of my heart, thank you for the gift of life,” began the handwritten note from a man who had been diagnosed with acute lymphoblastic leukemia. “Just before summer I was told for a complete cure I’d need a bone marrow transplant.”

Because the man’s sibling wasn’t an option, his doctors went to the donor list on Be the Match and found Gamache, who had joined the registry in the spring of 2015 as a sophomore at Oregon State University.

“I and my family will forever be grateful for you and think of you often. Again thank you for ... a second chance at life,” said the card signed “with lots of love and care, bone marrow transplant recipient.”

He sent his letter anonymously through Be the Match, which introduces donors and recipients a year after the recipient’s medical procedure, if both agree.

Gamache now knows the name of that man — Aaron Plaster, a husband and father who was diagnosed in February 2017 and received her donation that November. His daughter was just 3 months old when he learned he had cancer.

In early April, Gamache and her mother, Cec, flew to Winston-Salem, N.C., to meet Plaster and his family. Thanks to her stem cell donation on Aug. 21, 2017, which was two days before her 23rd birthday, he’s in remission.

Getting to know Aaron and his family “was quite amazing,” Gamache said.

But she wasn’t done helping others on the match list. Earlier this week, Maddie and her mom returned from Fort Worth, Texas, where she donated marrow again Monday, potentially saving another life.

“Three days after we got back from North Carolina, I got the call asking me to make an appointment for further testing,” Gamache said. “The only thing I know is she is a 23-year-old female somewhere in the United States.”

That’s unusual, she noted. She was on the Be the Match registry for two years before her first call. Some potential donors, who range from 18 to 45, have been on it for years and have never gotten a call.

“When you sign up, they tell you the odds. I think the odds now are about 1 in 500 to be matched,” she said. “It’s common to donate twice to the same recipient. It’s uncommon to donate to two people.”

Her donations involved different procedures. For Plaster, it was peripheral blood stem cell (PBSC) donation at a blood center in Seattle. The procedure at Cook Children’s Medical Center in Fort Worth was a bone marrow harvest.

“Honestly, it’s been easy,” Gamache said of donating through Be the Match. “They take care of everything. They book your doctor’s appointments. They reimburse you for travel, meals,” she said. “You just have to show up.”

“When they make it that easy, it’s hard not to do it,” she said.

Growing up in Moxee, where her father, Tim, is a third-generation farmer, Gamache graduated from East Valley High School in 2013 and Oregon State in 2017. While at Oregon State, she joined Alpha Gamma Delta sorority and got involved with its philanthropic efforts. Her friend Jesse McGinty championed Be the Match after losing one of her friends to leukemia.

Gamache was contacted for her first match on June 30, 2017, the day she moved back home from Corvallis.

After initial appointments involving a physical and blood draws, her first procedure involved five days of injections prior to donation. It wasn’t comfortable but it wasn’t painful, either.

“The day of donation, I was hooked up to (what was) like a dialysis machine for six hours. You’re awake the whole time. You have a needle in one arm, a needle in the other arm,” Gamache said. She watched Netflix and her mom brought her PF Chang’s for lunch.

For her second donation, when doctors harvested some of her bone marrow, she was under general anesthesia for less than an hour.

“It only took about 45 minutes to harvest what they needed,” she said of a procedure that could last up to 90 minutes. “I had two little Band-Aids on the backs of my hips. It was just a little bit tender but other than that, I wasn’t in any pain, just a little uncomfortable.”

She and her mom got back from Fort Worth late Wednesday. On Thursday she was just a little sore, “feeling like I had a bruise,” she said. But with her cheerful, upbeat nature, it was hard to tell she had just traveled for a medical procedure. Her hospital wristband was the only indication.

Her enthusiasm for Be the Match has inspired her sister Kelsey Gamache, 28, who just joined the registry. Her mom hasn’t signed up, she said, because Be the Match prefers donors under age 45 — college students in particular — but she’s happy to help inspire others to get on board.

“A couple of the girls from my work signed up,” her mother said.

Though Maddie Gamache likes keeping busy, these days are busier than others. Gamache is in Seattle this weekend for her best friend’s bachelorette party. She will be back home Monday and looking ahead to the July 17 wedding in Italy.

Along with working full-time in sales at Standard Floor & Paint, Gamache coaches junior varsity volleyball at La Salle High School and the Team Yakima 16 Black volleyball club, which just wrapped up its season.

Gamache marvels at the places she’s been and the friend she’s made because of Be the Match — and what she has been able to do through the nonprofit organization.

“It’s really awesome knowing the effect you have and saving a stranger’s life,” she said.

For those who are on the fence about donating, Gamache made this comment in a Facebook video:

“Donating hurts less than an intense workout at the gym,” she said.