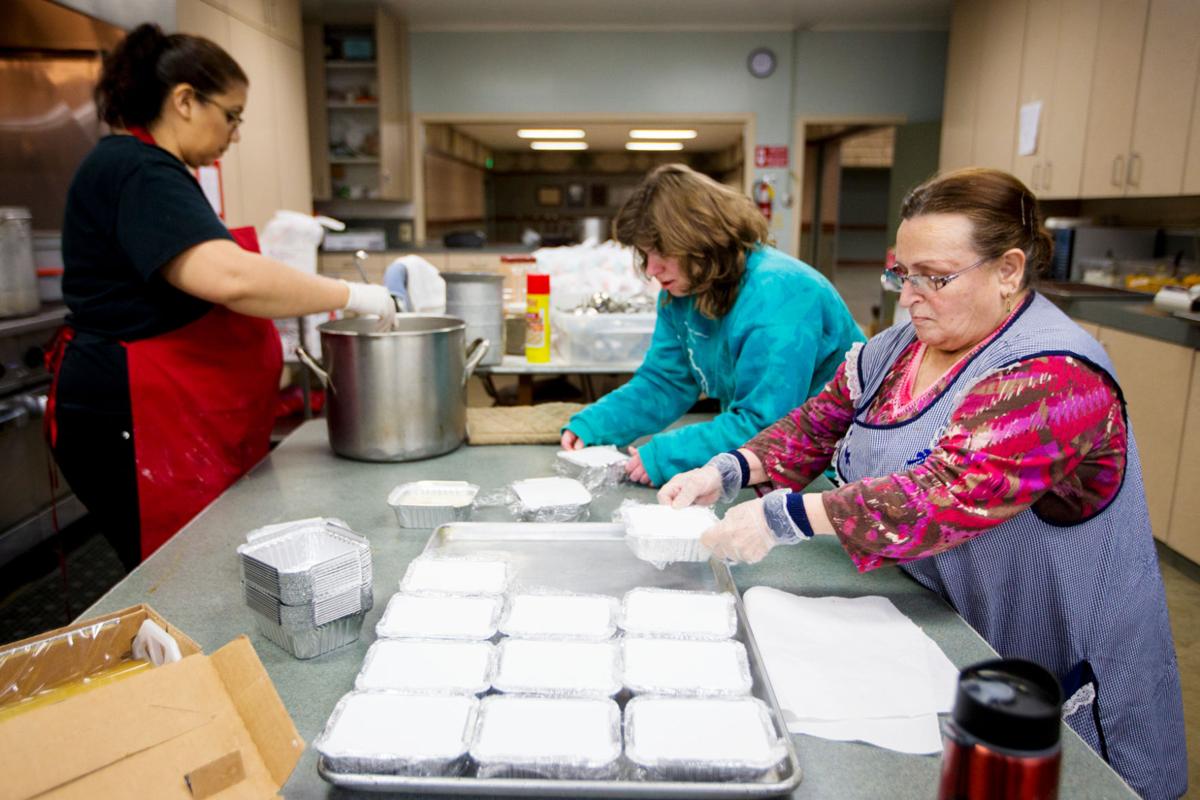 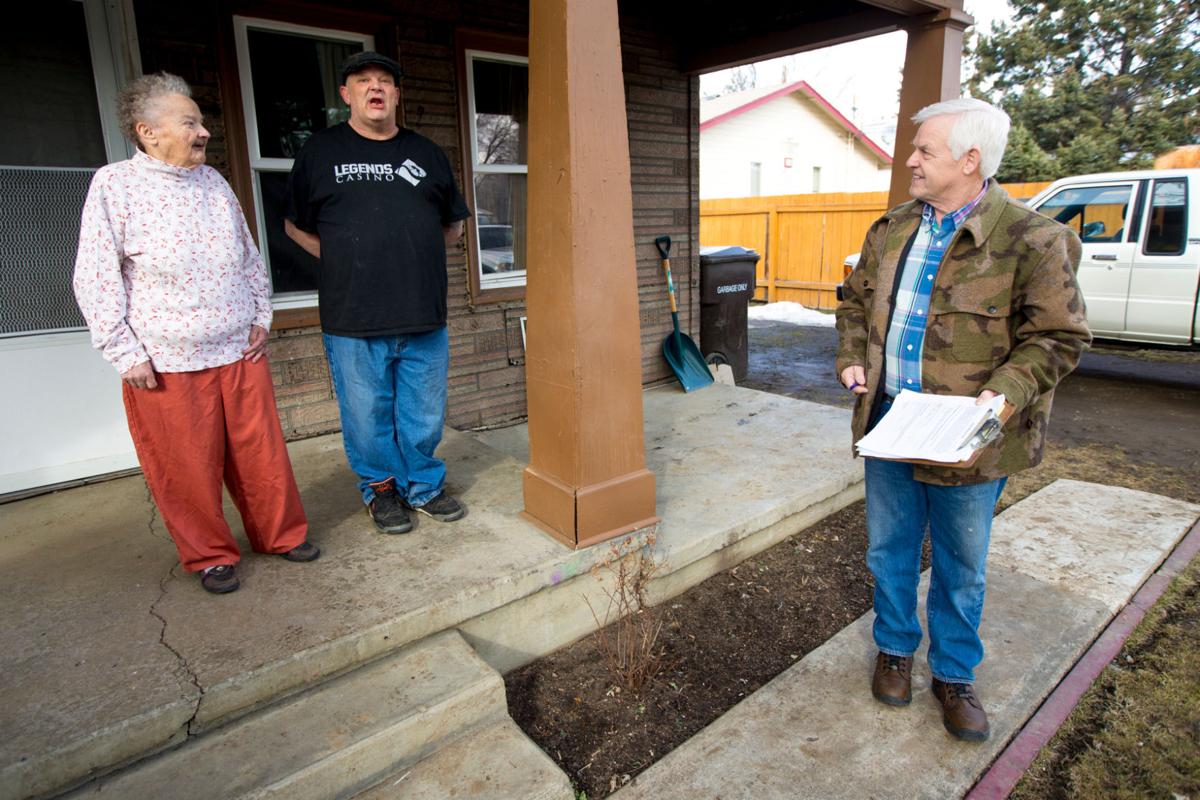 Meals on Wheels volunteer Craig Putman, right, chats with meal recipients Helen Hewitt and her son Jeffrey outside of their home in Yakima, Wash. on Friday, March 3, 2017. (JAKE PARRISH/Yakima Herald-Republic) 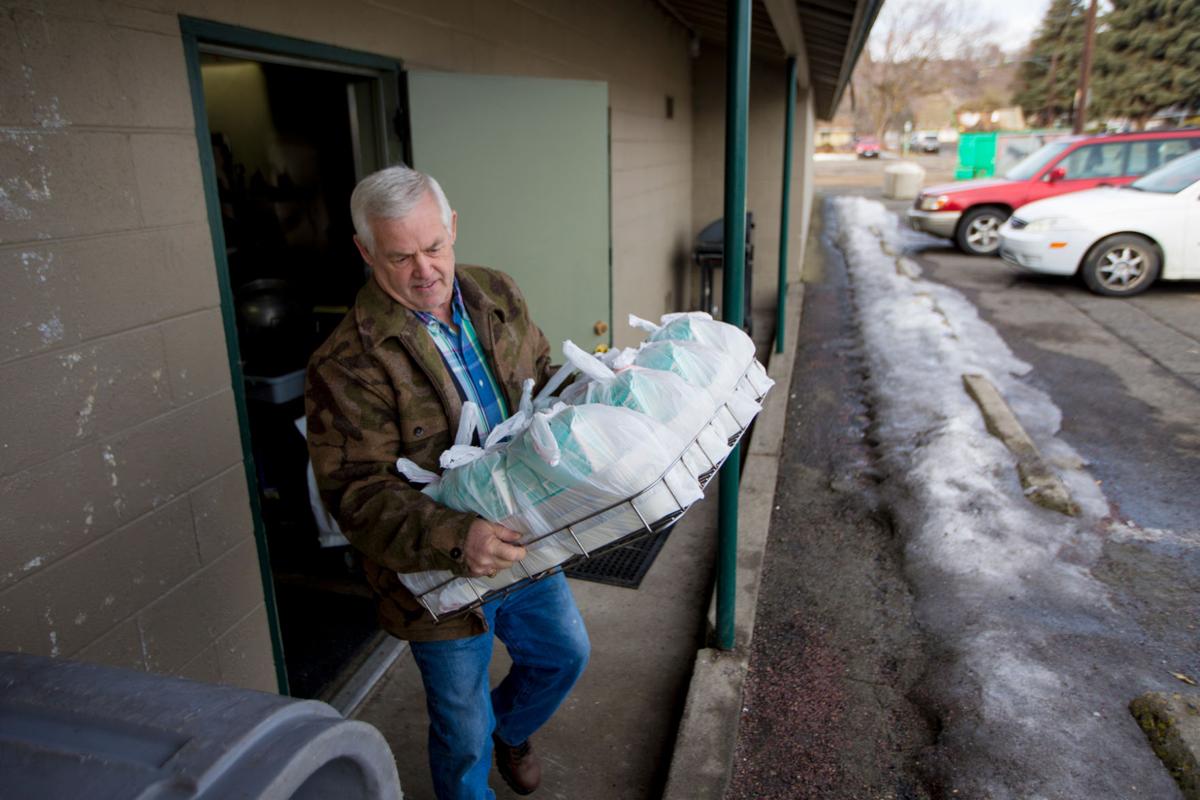 Meals on Wheels volunteer driver Craig Putman carries cold meals out of the Selah Civic Center to the delivery truck in Selah, Wash. on Friday, March 3, 2017. Putman has volunteered with the program for more than 3 years. (JAKE PARRISH/Yakima Herald-Republic)

Meals on Wheels volunteer Craig Putman, right, chats with meal recipients Helen Hewitt and her son Jeffrey outside of their home in Yakima, Wash. on Friday, March 3, 2017. (JAKE PARRISH/Yakima Herald-Republic)

Meals on Wheels volunteer driver Craig Putman carries cold meals out of the Selah Civic Center to the delivery truck in Selah, Wash. on Friday, March 3, 2017. Putman has volunteered with the program for more than 3 years. (JAKE PARRISH/Yakima Herald-Republic)

YAKIMA, Wash. -- Helen Hewitt has lived in her petite Yakima bungalow for 27 years, and that’s where she wants to stay.

But she’s often unable to cook for herself, so she relies on the Meals-on-Wheels program.

“It certainly does help me,” the 80-year-old said one day last week after receiving a hot meal for the day — a generous helping of clam chowder — along with two frozen meals for the weekend, plus fruit, bread and milk.

Nearby, Craig Putman was preparing for his next delivery. Having made three, he had 36 more to go. Those deliveries span the fabric of Yakima, ranging from trailer parks and motels to affluent homes on the hills above the city.

But this winter’s nasty weather has complicated deliveries for Putman and the other drivers in the program operated by the nonprofit social service agency People for People.

In December, home deliveries and service at six senior dining rooms across the Yakima Valley were canceled one and two days, respectively.

“The week before, we sent out a seven-day pack of extra frozen meals,” program manager Lorena Fernandez said of the day home delivery was canceled. “I kind of had a feeling it was going to get worse.”

It got worse in January and February when closures and deliveries were repeatedly prompted by bad weather.

“I’ve been with the program for five years. I’ve never had to cancel before,” she said.

Home meal delivery recipients got a call every time it was canceled, Fernandez said. One woman had food for only one day, so they took her more.

And demand continues to rise.

From November to February, a total of 176 new clients were served either in dining rooms or with home deliveries.

“We are getting four or five applications a day” for programs since the New Year, Fernandez said. “The need is growing.”

There’s usually a short waiting list of about six people, but so far the program has largely been able to keep up with demand.

There’s no income threshold to qualify for Meals-on-Wheels programs; home delivery recipients must have no transportation and be unable shop for groceries or safely cook for themselves.

Referrals come from many places — family and friends, neighbors, doctor’s offices and hospitals, agencies such as Veterans Affairs and others, and seniors themselves.

Some receive services temporarily, such as those recovering from surgery.

Some get meals for a few weeks, others a few months, some have been on the program for years, Fernandez said. “A lot of them don’t have family in the area.”

“Some (homes), you go in there and they have absolutely nothing in their fridge,” Fernandez said. “I don’t think people realize that there are seniors going without food, or have items but can’t prepare it. Some shouldn’t be cooking.”

Last fall, a partially paralyzed man called saying he had no food after being released from the hospital after an aneurysm and had eaten only apples for two weeks.

“He didn’t have a microwave,” Fernandez said. “We took him some food and got a microwave with donations from the staff. We got him connected with our transportation department at People for People and our 211 department” so he could obtain other services, she added.

“We’re slowly trying to add as many people as we can with our funding,” Fernandez said.

Funding is provided by the Older Americans Act and Washington State Aging and Disability Services, along with support from national foundations and businesses and donations by individuals, local businesses and seniors who benefit from Meals-on-Wheels.

While there’s no cost for meals, recipients are asked to donate $2 per meal, or what they can, because the program depends on donations as part of its budget base. But no one is denied meals due to an inability to donate.

Donations are important because funding covers only basic program necessities such as food product, equipment, supplies and minimal staffing to cook the meals.

“We make all of our soups, salads and casseroles from scratch and are using less canned food and overall less processed food,” Fernandez said.

Meals-on-Wheels has 12 paid staffers who include three in its office in Union Gap and two drivers along with cooks and site managers, some of whom handle both of those roles, Fernandez said.

Volunteers like Putman are critical. Last year, about 76 volunteers put in more than 12,000 hours, she said.

“My wife and I retired, and we decided there were a few things we wanted to do besides sit on our butts,” said Putman, 71. “It’s fun because these people are good people. I enjoy the people.”

Seniors can also get help with pet food

Many of the seniors who benefit from Meals-on-Wheels have pets, which led to pet food becoming part of Yakima County’s program eight years ago. Meals-for-Pets delivers dog and cat food, at no cost, to home delivery recipients twice a month, along with pet accessories as they’re available and when they’re needed.

In 2016, Meals-on-Wheels served 158 pets. A total of 82 seniors are currently receiving pet food, Fernandez said. Pet food is distributed once a month to low-income seniors who visit the program’s dining rooms.

Meals for pets is funded by a grant from Meals on Wheels of America and other grants, private and local business donations by ACME Dog Training, Banfield Charitable Trust, Banfield Pet Hospitals and Yakima Cooperative and Farms Supply.

“We probably had 1,000 pounds of pet food donated” at Bleyhl locations around the holidays, she said.

Meals-on-Wheels of Yakima County operates six senior dining rooms. Transportation is available to most, if needed. It’s suggested reservations be made at least the day before attending to assure that a meal will be prepared.

Seniors at all dining rooms and home delivery can choose between traditional American or authentic Mexican meals. Lunch is served at 11:30 a.m.

Getting seniors the nutrition they need is Meals-on-Wheel’s primary mission, but providing a setting for them to interact with others is important.

“A lot of them like going to the dining sites. They can socialize; they do bingo, exercise classes. We partner with other agencies,” said program manager Lorena Fernandez.

“Right now, we’re offering exercise classes twice a week at the Harry Beauchamp Center. Anybody can go” to the classes, which take place from 12:30 to 1:30 p.m. Tuesday and Thursday. The facility, formerly the Southeast Yakima Community Center, is located at 1211 S. Seventh St. in Yakima.

An event May 24 in Union Gap will raise funds for People For People’s Meals-On-Wheels program.