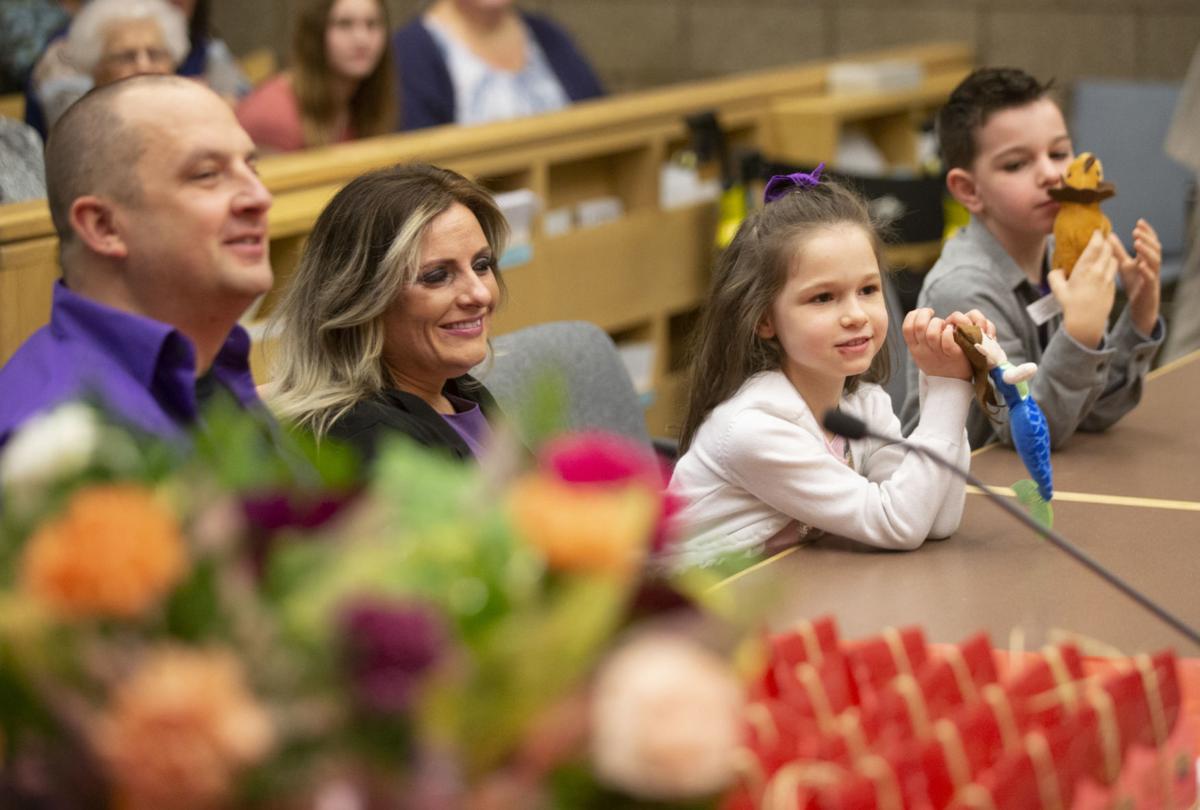 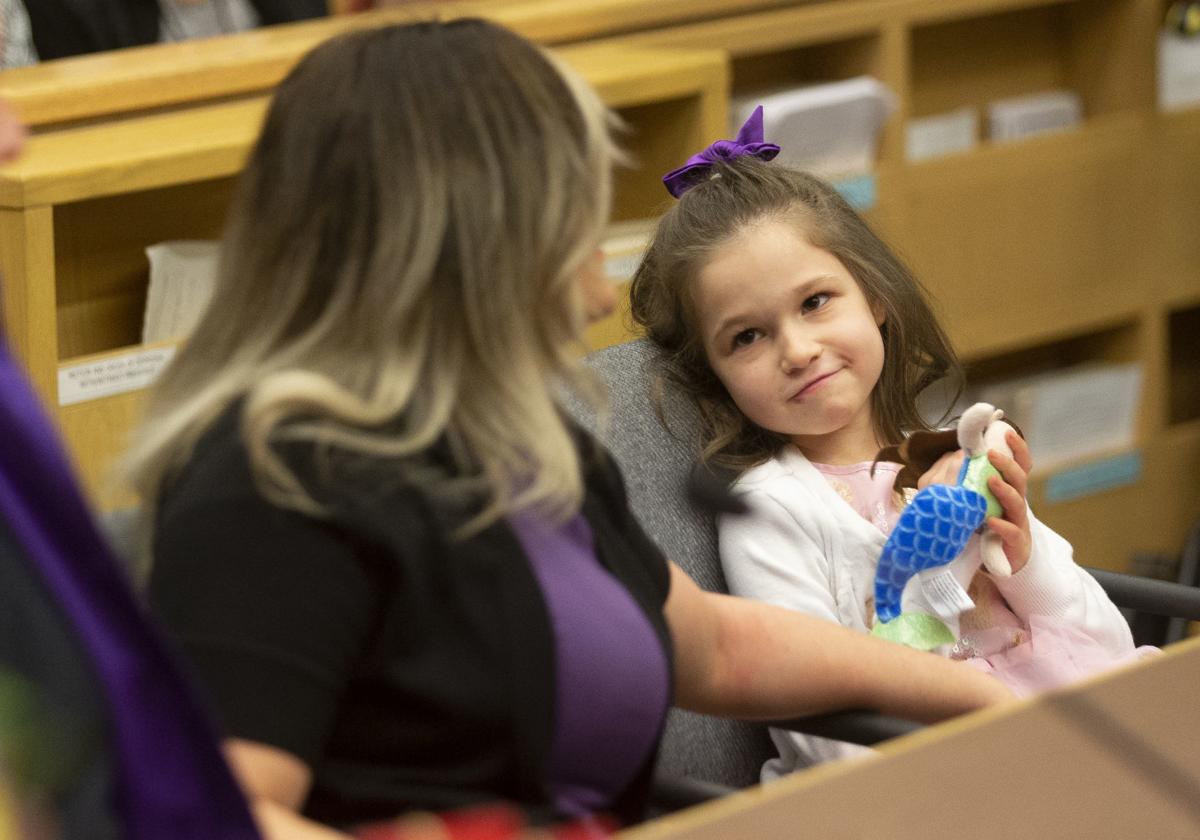 Jessica Cameron, left, looks at her daughter Hailey Cameron, 8, while adopting her on Friday, Nov. 15, 2019 at Yakima Juvenile Court in Yakima, Wash. 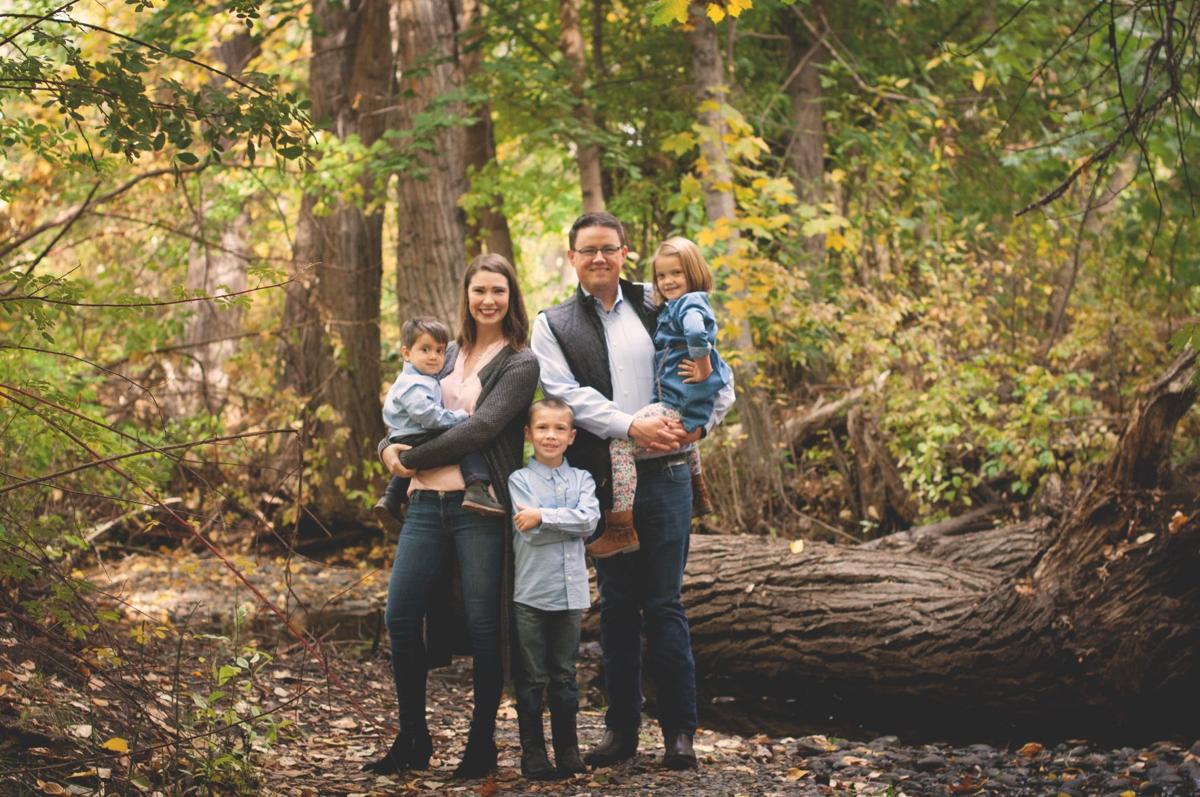 Jessica Cameron, left, looks at her daughter Hailey Cameron, 8, while adopting her on Friday, Nov. 15, 2019 at Yakima Juvenile Court in Yakima, Wash.

Jennica Corry talks often to people who have considered becoming foster parents but haven’t for various reasons. They may worry about financial or time commitments, or their own skills as parents. Perhaps they have never been parents.

All are important considerations, and being a caregiver is hard. Foster parents will admit that. But in the few years since they brought their first foster child into their home, Jennica and Chris Corry have seen the dramatic difference that love, support and stability can make. The simplest of daily routines, taken for granted by most, can change lives.

That is why what they do is so important.

According to the latest statistics available from the state Department of Children, Youth and Families, Washington has more licensed foster homes than ever — 5,109 in late June 2018. That’s a 3.1% increase from the previous year.

Despite the increase, there is still a big need for more foster families. With around 9,200 children and youths in out-of-home placements, according to the 2018 data, the state agency requires thousands of foster homes to care for vulnerable children. The most critical need, officials said in a news release earlier this fall, is for families who can safely provide support for children and youths with intense behavioral needs as well as foster homes for sibling groups and teens.

In September, the agency released plans to improve communication, licensing and resources for foster parents. Ross Hunter, secretary of the Department of Children, Youth and Families, outlined ways to recruit and retain people to take on this crucial role.

“The answer lies in how we treat and support the people who currently help us provide a nurturing home for the children and youth in Washington,” Hunter said in the report.

The most difficult part of being a foster parent, Jennica said, is not being in control of some situations. She and her husband have learned to focus on what they can control, such as caring for children’s daily needs, looking for opportunities for them, leading by example and supporting them academically, emotionally and physically.

“I wouldn’t say that I expect the unexpected,” she said, “but rather I just say, ‘I have no idea what is going to happen, but I will deal with it when it does.’”

A Yakima native, Jennica works from home as a quality assurance manager for an insurance audit department. Chris is a commercial insurance adviser and state representative for the 14th District. In that role, and through their participation in local organizations, they speak often about their decision to become foster parents.

The couple met at the University of Washington and moved to Yakima in 2013 with a toddler and a new baby on the way. Clearly they were busy, but through Jennica’s involvement with the Junior League of Yakima and the Voices for Children Foundation, among other volunteering, they saw the immense need for foster families. They wanted to give children a safe place to stay, she said.

They began the process of becoming a licensed foster home by taking classes and submitting paperwork, and got licensed almost three years ago.

That process will change next year, Hunter said in announcing plans to better recruit and retain foster parents. It will go from a manual, paper-based application process to an online one.

“Places that have done this report large increases in foster parent satisfaction and saw reduction in the time it takes to get licensed by 20%,” he said. “This has been funded, and we intend to have it up and running by next summer.

“We’re also planning a revamp of our licensing process to speed up the federally required home-study process to make it less time consuming and intrusive. Our goal would be to have this online next summer as well.”

Being a foster parent is a labor of love and an emotional roller coaster, Jennica said. For her and Chris, one of the most rewarding experiences has been seeing various medical and counseling appointments pay off when a child goes from struggling academically to receiving an award for student of the week.

The state Department of Children, Youth and Families provides foster parents and caregivers with resources and support, such as monthly reimbursements, clothing vouchers, mileage reimbursements, social worker visits and training. And a variety of resources are available for foster parents including child care payments (child care for working parents is paid for by the state), toll-free support phone lines, training and support groups.

While an annual survey noted Washington foster parents reported greater satisfaction with the support they received in 2017 and 2018, written comments show there are still some areas where many desire improvement, including information sharing, inclusiveness, reimbursements and efficient processes.

The Foster Parents Speak: 2018 Foster Parent Survey includes input from 1,349 foster parents. They were asked about their satisfaction with support, training and information provided by the Department of Children, Youth and Families and private agencies contracted to provide services to foster parents.

In his report, Hunter said the process concerning resources, “particularly for child care, has been frustrating, and one of the benefits of our coordinated agency is the ability to make this better, and we’re working on it.”

Over the past few decades, mental health needs for children have increased, which can be difficult for foster parents to manage, he added.

“Part of (Gov. Jay Inslee’s) improvements in Washington’s mental health services is a package of interventions called the WISe wrap-around that we are working to make available to children who need these services, helping the foster parent provide a supportive environment,” he added.

Keeping communication open Hunter said communication between foster parents and the child’s caseworker “has been a frequently reported problem for many years.” Officials can change rules and policies “until we are blue in the face, and we’ll have difficulty making this better until we reduce the caseloads our workers have,” he noted.

“That said, we can improve communication on a host of important topics by making information available online, with automatic updates about court date changes, etc.,” Hunter added. “This is further out, and will follow our work on the licensing automation.”

Foster parents can talk about concerns and provide feedback through the agency’s Foster Parent Consultation Team meetings, Hunter said. The department is reorganizing meetings to make them more effective, and taking them on the road so everyone across the state can join in person.

In encouraging others to become foster parents, Jennica Corry suggested getting licensed and then providing respite care, which is for a specific period of time.

“It is an easier step if you are worried about getting too attached. Because getting attached also means you can get your heart broken,” she said. “I know it, I’ve seen it, I’ve felt it. But I look at it as I’m giving part of my heart to a child who needs it just a little bit more than I do.”

Changing lives now and for a lifetime

Providing respite care works best for some foster parents, and clearly there’s a need for it. Others make their caregiving role permanent by adopting the child or children in their care.

For 2019, more than 1,750 children in state foster care are legally free and waiting to be adopted, according to a recent news release from the Washington State Administrative Office of the Courts. Approximately 10% of those children were set to be adopted during public National Adoption Day celebrations in courts and community halls around Washington from Nov. 15-23.

In the previous 14 years, 2,446 children have been adopted in Washington during these public events, and hundreds more children and families have attended other celebrations commemorating the unique journey of adoption.

At an event in Yakima on Nov. 15, Jessica and Ben Cameron adopted James Cameron, 6, and Hailey Cameron, 8. They began fostering the siblings in February.

The couple began fostering children about 5 ½ years ago, Jessica Cameron said. Along with fostering James and Hailey, they fostered two girls and a boy before them.

“I felt, since I’ve been a little girl, that I was being called to foster care,” she said. “We were only able to have one biological son. That’s when I felt God was telling us there were kids already born who needed us. So we decided to go into the foster care system, and then we decided to adopt.”

The Camerons also were going to adopt the boy they were fostering, but his biological mother got her life back on track and was able to take him back, Jennifer Cameron said. She and her husband formed a bond with her to keep in contact.

Seeing the children change in many positive ways is so rewarding, Cameron said in encouraging others to become foster parents.

“You just have to take that leap of faith. It might not be for you, but just try it,” she said. “Honestly, for us, it’s been a blessing and it has just made our hearts bigger.”

The family is moving to Spokane, and she wants to foster at least one more child. That’s still up in the air, she said.

“(Ben) said let’s get settled with these two first. I always feel like i can help everybody,” she added. “We do plan to open up our foster care license there.”

The Corrys also adopted one of their foster children — their first placement, Levi. Along with Levi, they have provided respite care for six children, from infant to elementary age. They have had placement of another foster youth since last year, Jennica Corry said.

“We wanted to become foster parents to give children in care a safe place to stay and never really planned to adopt, but that was God’s plan for us,” she said.

Help kids in foster care in the Yakima Valley

When Jennica Corry moved back to Yakima, she joined the Junior League of Yakima. Through her first experiences there, she said, she became involved with a local nonprofit, the Voices for Children Foundation, and the launch of its IDentity program.

IDentity matches the clothing needs of children in foster care with donated resources of gently used apparel items in a retail setting geared exclusively for them.

Voices for Children is dedicated to enriching the lives of abused and neglected children in the foster care system throughout the Yakima Valley, its website notes.

"Through these volunteer experiences, I was able to see bits and pieces of the foster system, everything from social workers going above and beyond, to excited children in care attending events at IDentity, to the generous support of community members," Corry said.

To learn more about Voices for Children, visit http://voicesforchildrenyakima.org.

There are foster children in the Yakima Valley who need safe, stable and caring homes right now. If you want to help children and are flexible, learn more about becoming a foster parent by calling 1-888-KIDS-414.

Fostering Change for Children is another organization that advocates for foster parents and children. Get more information at www.fosteringchangeforchildren.org.