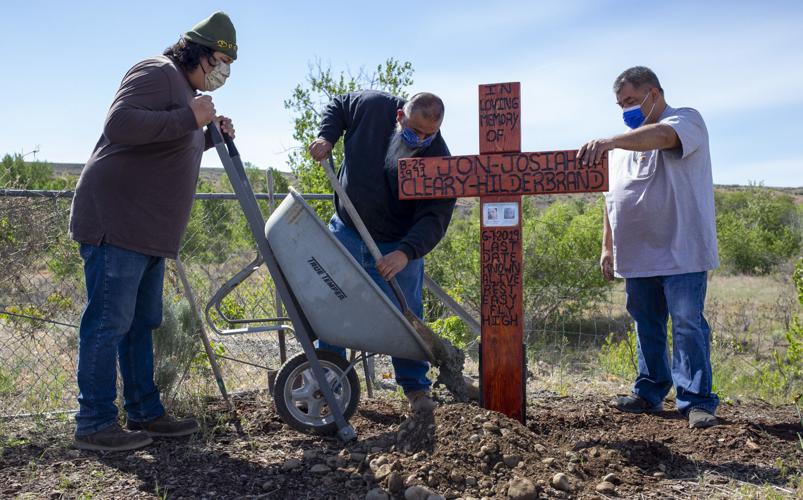 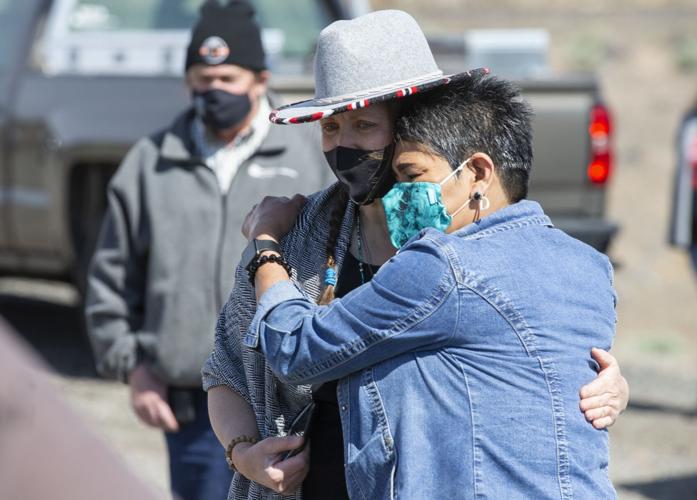 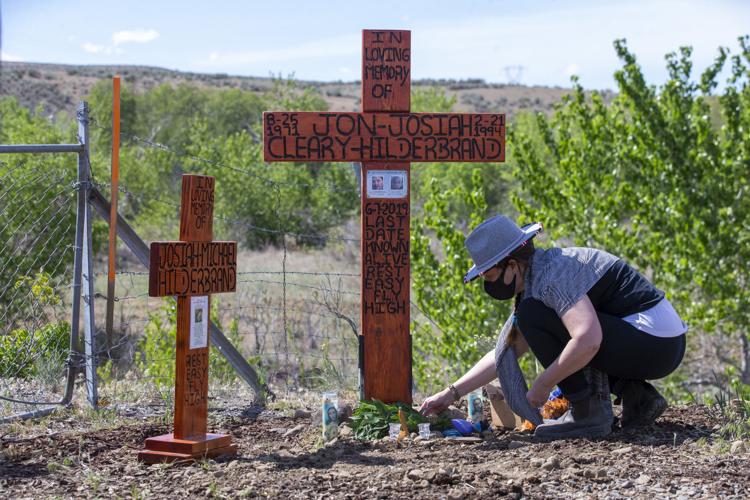 Liz Hilderbrand places river rocks from her home and other items around the base of a cross for her son Josiah Michael “Jo” Hilderbrand and his friend Jon Cleary Saturday, May 8, 2021 near Toppenish, Wash. The smaller cross on the left is a gift from Rick Dominguez for Hilderbrand to take home. 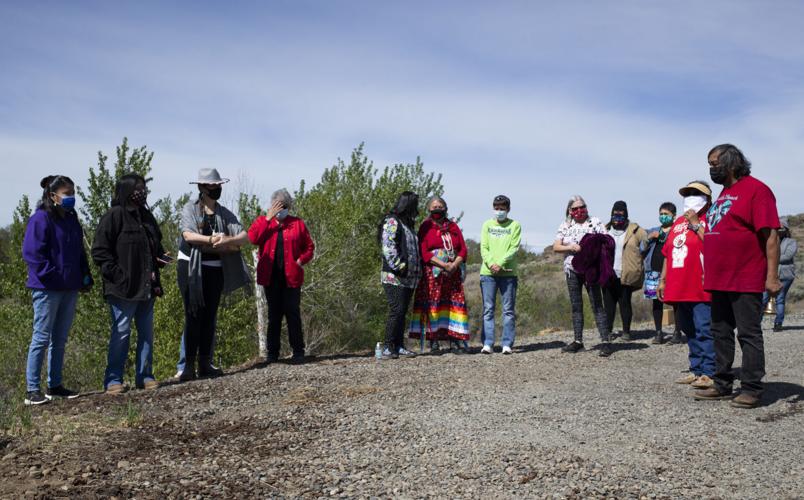 Liz Hilderbrand places river rocks from her home and other items around the base of a cross for her son Josiah Michael “Jo” Hilderbrand and his friend Jon Cleary Saturday, May 8, 2021 near Toppenish, Wash. The smaller cross on the left is a gift from Rick Dominguez for Hilderbrand to take home.

Sonya Dominguez put an arm around Liz Hilderbrand as they stood near a dirt road just off U.S. Highway 97 south of Toppenish on Saturday morning.

Both women have lost sons, which makes the Mother’s Day weekend especially hard for them. But watching Sonya’s husband Rick Dominguez, their son-in-law Ezra Salinas and Brad Goudy re-set the wooden memorial cross Rick Dominguez made for Josiah Michael “Jo” Hilderbrand and his friend, Jon Cleary, brought some peace for Josiah’s mother.

“Thank you for coming here. Thank you for opening your hearts to me and my son and Jon,” said Hilderbrand, who traveled from her home in California to see the cross re-mounted in a special ceremony at a new location east of the highway just north of milepost 51.

The two Californian men, friends and devoted Grateful Dead fans, disappeared when they were driving through Yakima County to a Dead & Company concert at the Gorge Amphitheatre. The car they were traveling in was discovered abandoned and partially burned the morning of June 8, 2019, in an orchard at 8100 Lateral B Road, about 8½ miles west of Toppenish.

The last date they were known to be alive was June 7, 2019, which Dominguez noted on the cross. On Aug. 5, 2020, a road crew working on Highway 97 about 10 miles south of Toppenish found their remains in the area of milepost 52. Their deaths were ruled homicides and the FBI is investigating.

The day the men’s car was found, five people were killed in a shooting rampage in Medicine Valley outside White Swan. Two men accused in the murders, James Dean Cloud and Donovan Quinn Carter Cloud, face trial in in U.S. District Court in Yakima in February 2022. A third man, Morris Bruce Jackson, was charged with illegal possession of a firearm.

Liz Hilderbrand mentioned the White Swan murders in speaking Saturday. That anniversary is also heavy on her mind as it approaches.

“When I came here last August” after Josiah and Jon’s remains were found, she felt it was her son’s death that tied her to the area. At that time, Hilderbrand went to where his remains were found and placed dozens of marigolds, sunflowers and white sage from his memorial garden and her own.

“I feel now that what ties me here is healing,” said Hilderbrand, who went to the nearby site again before Saturday’s gathering. “It’s overwhelming. It just speaks to who you are and it just means so much to me.

“Tomorrow is Mother’s Day and my birthday. I don’t think it’s a coincidence,” she added. “I don’t think this is the last time we’ll see each other. Thank you for your kindness. I love you — all of you.”

Rick Dominguez and Goudy originally placed the cross in another location closer to Highway 97 near milepost 52 on Sept. 3. Workers with the Washington State Department of Transportation cut it down in mid-March and removed it and items with it, upsetting not only them and the men’s family and friends, but also many tribal citizens and others.

Private memorials are not allowed along state roadways due to safety concerns. State highways on tribal lands are an exception, and the Yakama Nation is sovereign.

Dominguez got the cross back on April 6, the day after state transportation officials met with tribal representatives about its removal. When he made it, he never expected to set it up twice. But things happen for a reason, and it was good to be with Hilderbrand and about 20 others on such a beautiful morning.

“It was an honor to do this again. This is our way to respect these two boys that were missing. I dedicate this cross to all the missing men and women out there,” said Dominguez, who lives in Toppenish and is known as the Cross Man. With the help of his wife, son-in-law and daughter Chestina Salinas, he has made and placed more than 200 memorial crosses.

He also made a smaller one, with a base, for Liz to take back home. “It’s just our way of giving back to our people and you,” said Dominguez, who said he’ll make one for Cleary’s family when they are ready.

Cleary’s father, sister and brother in Tennessee, along with his mother in Florida, sent a family statement to be read at the ceremony.

“To Rick and all present for the ceremony, we would like them to know how grateful Jon’s family is for each of them. We appreciate their kindness,” the statement said. “And though our hearts and spirits are crushed right now, they have eased our hearts and grief by being there and holding this ceremony for our beloved Jon,” it said.

“Being we can’t be there and being we haven’t been able to receive Jon’s remains yet, to give him the send-off he deserves from his family,” they appreciate those who honored and remembered Jon. “We are with them there in spirit and we are sending our love to Jon and Josiah.”

His father said he was emotionally humbled that Cleary’s spirit was honored in a sacred ceremony on such sacred land.

George and Doris Strong, leaders in the Indian Shaker Church, conducted the ceremony that involved blessing the cross. She understands the profound hurt of losing a loved one unexpectedly. She and Sonya Dominguez spoke of that loss.

“I’m thankful to finally meet Liz. Our hearts are poured out to you,” Sonya said. “I understand when a mother loses a child. That hurt never goes away. I’m thankful we can heal our community this way.”

“You carry on the best you can and walk that good road to see them again,” she said. “One day I know I’ll see my son, too.”

Patsy Whitefoot sang a traditional song that Yakama women sing when they’re out and about, gathering traditional foods and medicines. Her sister, Daisy Mae Heath, has been missing since late summer 1987. Whitefoot and three other women run the War Cry Podcast, and interviewed Hilderbrand about her loss in one of the episodes.

“I thank the Creator I’m still here and there’s work to do,” Whitefoot said. “We all have work to do and each and every one of us has been endowed with a special gift.”

She and others presented Hilderbrand with gifts, including a hat beaded by Caroline Looney. “We wanted to show Liz we’re as one” in supporting her and Cleary’s family, Looney said.

Along with the hat and a visor, a beaded bag and a beaded medallion made in honor of missing and murdered Indigenous women, Hilderbrand was wrapped in a blanket. She brought gifts for others and she beamed behind her face mask as the group sang “Happy Birthday” to her.

Earlier in the ceremony, as Doris Strong spoke, a yellow butterfly fluttered into the open area between the groups of women and men on either side of the memorial cross. Hilderbrand watched as it meandered among people before flying away. She thought of Josiah as she mentioned it to another woman nearby.

About two weeks after it was cut down by state highway workers, a memorial cross mounted in September for two California men who disappeared w…