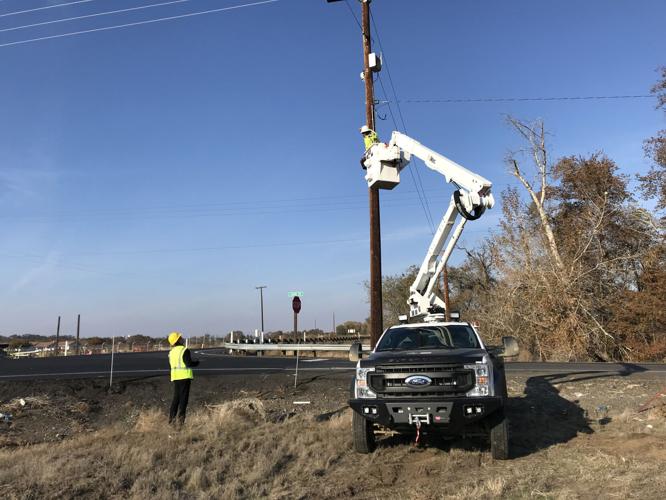 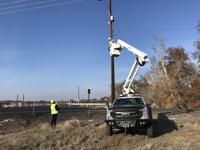 Yakama Power Meterman Garrett Ambrose discusses the installation of the Mobile Unit for Sensing Traffic (MUST) on a power pole with Dr. Wei Sun (left), CEO of AIWaysion, at the intersection of Larue Road and U.S. Highway 97 on Nov. 15, 2022. 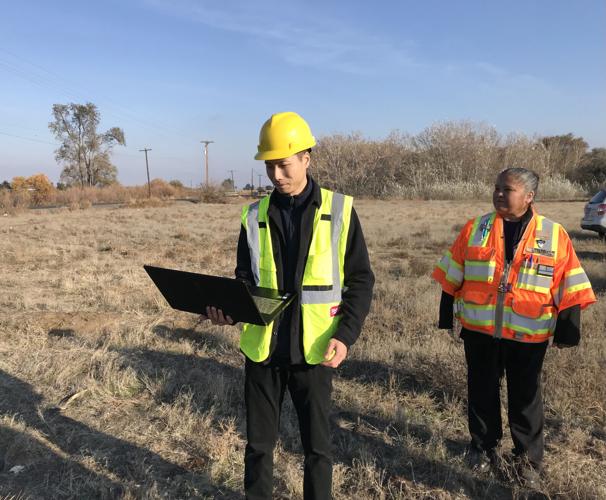 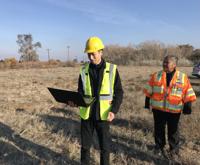 AIWaysion Project Manager Luyang Gong (left) and HollyAnna Littlebull, traffic safety coordinator at the Yakama Nation Department of Natural Resources, look at the first results from the Mobile Unit for Sensing Traffic (MUST) on Nov. 15, 2022.

Yakama Power Meterman Garrett Ambrose discusses the installation of the Mobile Unit for Sensing Traffic (MUST) on a power pole with Dr. Wei Sun (left), CEO of AIWaysion, at the intersection of Larue Road and U.S. Highway 97 on Nov. 15, 2022.

AIWaysion Project Manager Luyang Gong (left) and HollyAnna Littlebull, traffic safety coordinator at the Yakama Nation Department of Natural Resources, look at the first results from the Mobile Unit for Sensing Traffic (MUST) on Nov. 15, 2022.

A new sensor at the intersection of Larue Road and U.S. Highway 97 will provide more information to improve traffic safety in what can be a dangerous part of the Yakima Valley.

Yakama Nation’s Department of Natural Resources collaborated with the University of Washington’s Smart Transportation Applications and Research Lab and AIWaysion to install the sensor, called a Mobile Unit for Sensing Traffic, this week.

“This is the deadliest intersection on the reservation,” explained HollyAnna Littlebull, traffic safety coordinator at the Yakama Nation.

Seven fatalities and more than 30 collisions have occurred at the intersection of Larue Road and Highway 97. The sensor could inform drivers of road conditions and give planners more data moving forward.

“We want to see what kind of users are using this intersection … We need to know the volume, the types of vehicles,” Littlebull said. “We’re trying to make data-informed decisions.”

It’s a pilot project, said Littlebull, and was funded by a grant from the University of Washington. Littlebull said that once the device was properly tested, it would produce data for real-time road conditions. That could be helpful when visibility is low, during foggy or smoky days.

The sensor will also be able to assess visibility and distinguish between fog and smoke.

The device may also help Littlebull and other officials plan for the future. They allow DNR to better understand the types of vehicles and travel taking place in the Yakama Nation. Some of those data-informed decisions have already been made — WSDOT collaborated with the Yakama Nation to put a roundabout at the intersection of McDonald Road and Highway 97.

Highway 97 is an important travel corridor in the region, with the road over Satus Pass linking much of Oregon with Central Washington.

The stretch of Highway 97 through the Lower Valley has been dangerous for passengers and pedestrians, though. On average, at least one fatality per year has occurred between Toppenish and Lateral A, as well as more than 700 collisions, in the last two decades, according to Summer Derrey, spokesperson for the Washington State Department of Transportation.

Littlebull said that sensors, roundabouts and more robust pedestrian access may soon be coming. One roundabout is already in use at Highway 97 and McDonald Road and another will be constructed where Highway 97 meets Jones Road in 2023.

Four more roundabouts were recently approved, including one at Larue and Highway 97 where the new sensor is.

“Being able to have sensors at all those locations would be really important because those are frequent areas of travel,” Littlebull said.

Wei Sun and Luyang Gong have worked on this technology for years at the University of Washington. Wei is now CEO of AIWaysion, a company that grew from his research into traffic technology.

Luyang said the MUST sensor has a camera and computer and is less than a cubic foot in size. The device monitors passing vehicles and weather, analyzes data using its computer and transmits traffic and road conditions to the Yakama Nation.

Wei said all computing is internal and that data is analyzed and then quickly deleted, because the device’s computer doesn’t have the space to store large amounts of information.

Increasing safety has been an ongoing priority for officials at the Yakama Nation and from the Washington State Department of Transportation, or WSDOT. Littlebull has been involved in efforts to improve travel along Highway 97, including the Heritage Connectivity Trails — a network of pedestrian walkways which could one day stretch throughout the Yakama Nation.

Jasper Kenzo Sundeen’s reporting for the Yakima Herald-Republic is possible with support from Report for America and community members through the Yakima Valley Community Fund. For information on republishing, email news@yakimaherald.com.