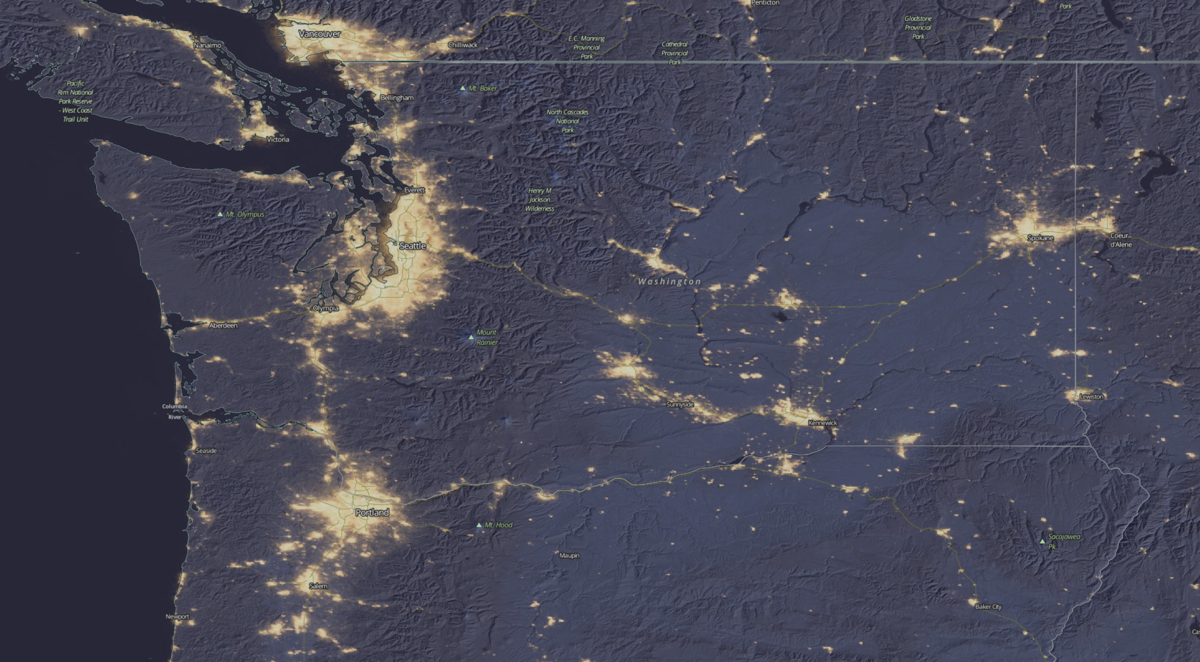 This image taken from NASA's ASTER satellite in 2012 shows the bright lights of the Yakima Valley as seen from space. 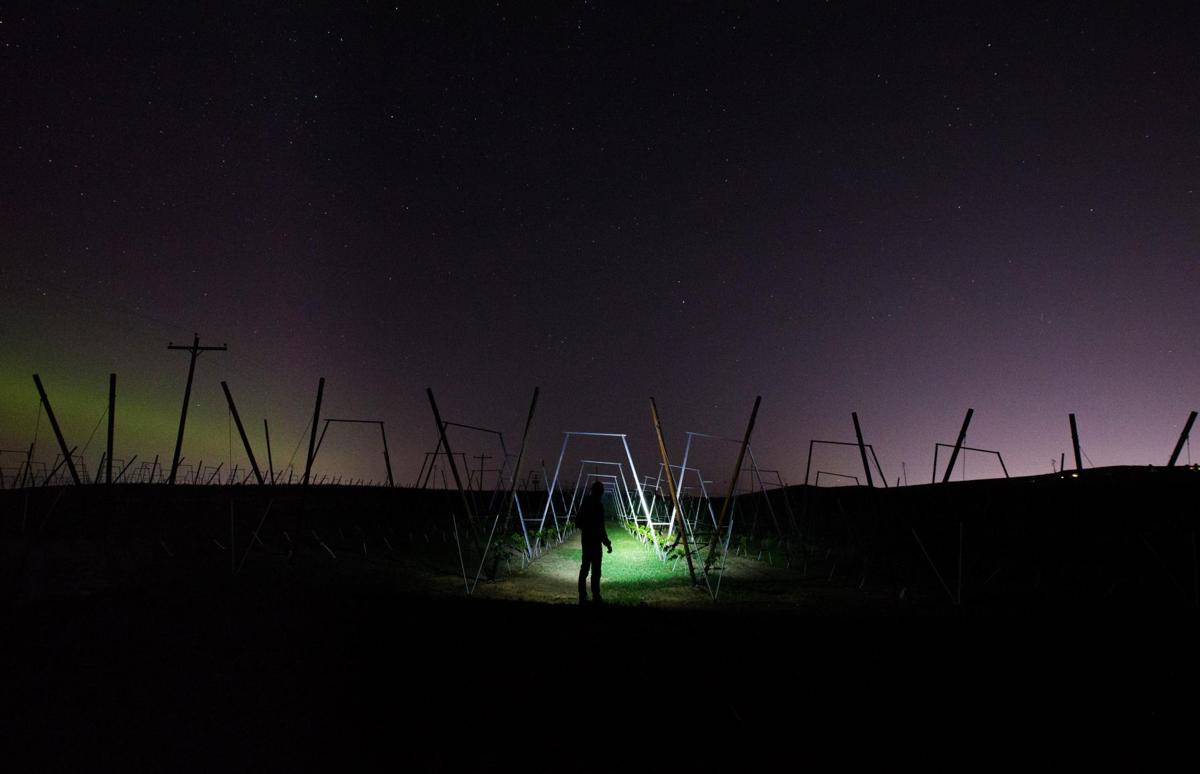 The Aurora Borealis shine on the left side of this image while light from illuminates the sky on the right in Selah, Wash., Sunday, May 28, 2017. The Aurora Borealis, or Northern Lights, are the result of electrons colliding with the upper reaches of Earth's atmosphere. (SOFIA JARAMILLO/Yakima Herald-Republic) 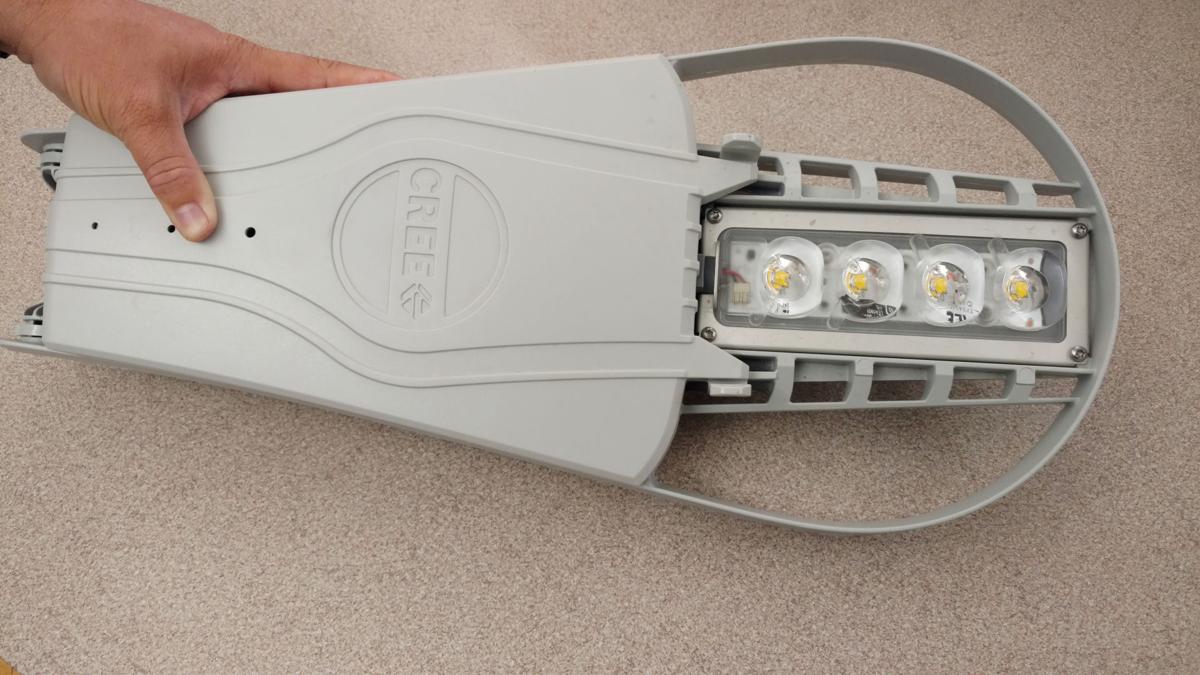 Prosser workers have installed more than 400 LED streetlights in the city as part of an effort to cut energy costs. Additionally, the lights also create less light pollution. (CITY OF PROSSER/Courtesy Photo)

This image taken from NASA's ASTER satellite in 2012 shows the bright lights of the Yakima Valley as seen from space.

The Aurora Borealis shine on the left side of this image while light from illuminates the sky on the right in Selah, Wash., Sunday, May 28, 2017. The Aurora Borealis, or Northern Lights, are the result of electrons colliding with the upper reaches of Earth's atmosphere. (SOFIA JARAMILLO/Yakima Herald-Republic)

Prosser workers have installed more than 400 LED streetlights in the city as part of an effort to cut energy costs. Additionally, the lights also create less light pollution. (CITY OF PROSSER/Courtesy Photo)

YAKIMA, Wash. -- Driving on Interstate 82 at night, it’s easy to spot Yakima, even when there’s a ridge in the way.

Just look for a pale glow in the sky, from streetlights, parking lots and other fixtures illuminating Yakima, Union Gap and Selah.

While some look at it as just a sign of civilization or safety, others see it as quiet environmental blight — light pollution.

“Every human up until 100 years ago could look at the same sky,” said Peter Strasser, International Dark-Sky Association technical director. “Today, we cannot.”

Along with obscuring the night sky to the point the Milky Way is invisible, stray light also can affect people’s health and sleeping patterns and the behavior of animals.

While local municipal codes do not address light pollution per se, at least two Yakima Valley cities have taken steps to help address the problem such as installing LED streetlights and requiring commercial property lights to not shine on neighbors.

Light pollution is caused when outdoor lights shine up, creating glare that lightens the sky. It’s primarily caused by poor lighting design, Strasser said, as well as a belief that more light is better.

Traditional acorn-shaped streetlamps date back to the days when natural gas was used to light streets. Back then, the lamps were more for helping people find their way than broad illumination, Strasser said.

But when flickering flames were replaced by brighter incandescent bulbs, people liked the ideas that streets could be lit up more, and in theory become safer because people could see better.

But the acorn lights, which are still used in many places because people like antique-style lights, and the cobra-headed lamps didn’t just project light on to the street and sidewalks. There was light going to the sides and into the sky, which creates light pollution.

As a result, skies in urban areas became less dark, causing the stars to dim considerably. Britain’s Royal Astronomical Society found in 2001 that two-thirds of Americans and half of Europeans can no longer see the Milky Way at night with their naked eyes.

Bruce Perrault, a member of the now-defunct Yakima Astronomical Society, said it used to be possible years ago to go stargazing from Randall Park and other places in Yakima. Today, he said much of the night sky is not visible unless one gets away from Yakima, either out east of Moxee or west to Naches and Cowiche.

But light pollution is even creeping into previously pristine areas.

One area Perrault used to go to for “star parties” — when amateur astronomers come together to view the heavens with their telescopes — was Table Mountain near Ellensburg. In the 1970s, it was a great dark-sky observation area.

In recent years, he said light pollution has started creeping in from Yakima, Ellensburg and Wenatchee.

“It progressively gets worse,” Perrault said.

But it is not just night-sky views that are affected by light pollution.

Researchers in 2006 found that prolonged exposure to artificial light prevented many trees from adapting to seasonal changes, which in turn causes problems for foraging wildlife. Researchers have found that light pollution can disorient animals, causing birds to go off course during migration, frogs to not mate when they should or sea turtles to go away from the sea after hatching.

In humans, researchers believe the excess light can lead to sleep disorders and contribute to other health problems. Two studies in Israel of 147 communities found a correlation between breast-cancer rates and light pollution.

The solution is not to get rid of lights, but rather to redesign them so that the light is directed straight down, where it is needed.

“The task is to light the street, not the undersides of airplanes,” Strasser said.

The International Dark-Sky Association recommends cities adopt lighting ordinances or codes that regulate the type of light used, with some areas designated for no lights due to environmental concerns. Strasser noted that in Tucson, Ariz., where the association is based, a 43-year-old dark-sky ordinance has allowed people there to see the Milky Way at night.

Yakima does not have an ordinance that addresses light pollution, but Planning Manager Joseph Calhoun said the city does require that parking-lot lighting be directed so it does not spill over or shine on neighboring property. He said lighting also is part of the environmental review process for projects, such as making sure lights don’t shine on or near creeks to avoid disrupting animal behavior.

“It’s definitely something we want to consider,” Calhoun said.

This summer, the city is planning to replace 3,700 high-pressure sodium streetlights with LED fixtures. While officials say the move will cut the city’s electrical bill by $352,000 a year, Strasser said properly-designed LEDs also cut light pollution by focusing the light on the ground.

In Prosser, which made the switch last year, City Administrator Dave Stockdale said he noticed that the night sky appeared to be darker as a result of the new fixtures.

Steve Zetz, Prosser’s planner, said the light-emitting diodes are flush with the lamp housing, which eliminates much of the side spillage, while the diodes themselves focus the light in a downward direction.

Like Yakima, Prosser does not have a dark-sky ordinance, but Zetz said the city also reviews lighting plans for new construction and requires lights to face down and not scatter light other places.

But fixtures are half the issue, Strasser said. He said the light’s color cast needs to be adjusted away from the blue end of the spectrum and more toward a “warm white” to avoid interfering with sleep patterns. Plus, he said the lights should be designed to provide just enough light to see adequately without being so bright that they create deep shadows where a criminal can hide.