“We are one step closer to a real democracy, one that we and our children deserve,” she said during a Wednesday news conference in front of the Yakima County Courthouse.

The settlement will force new commission district boundaries and an election for all three seats in 2022. It will create a new Latino-majority district and end at-large election of seats in the general election. It will not implement ranked-choice voting.

Gutierrez was flanked by nearly a dozen others, some from the Seattle-based immigrant rights group OneAmerica and others from Campaign Legal Center based in Chicago. 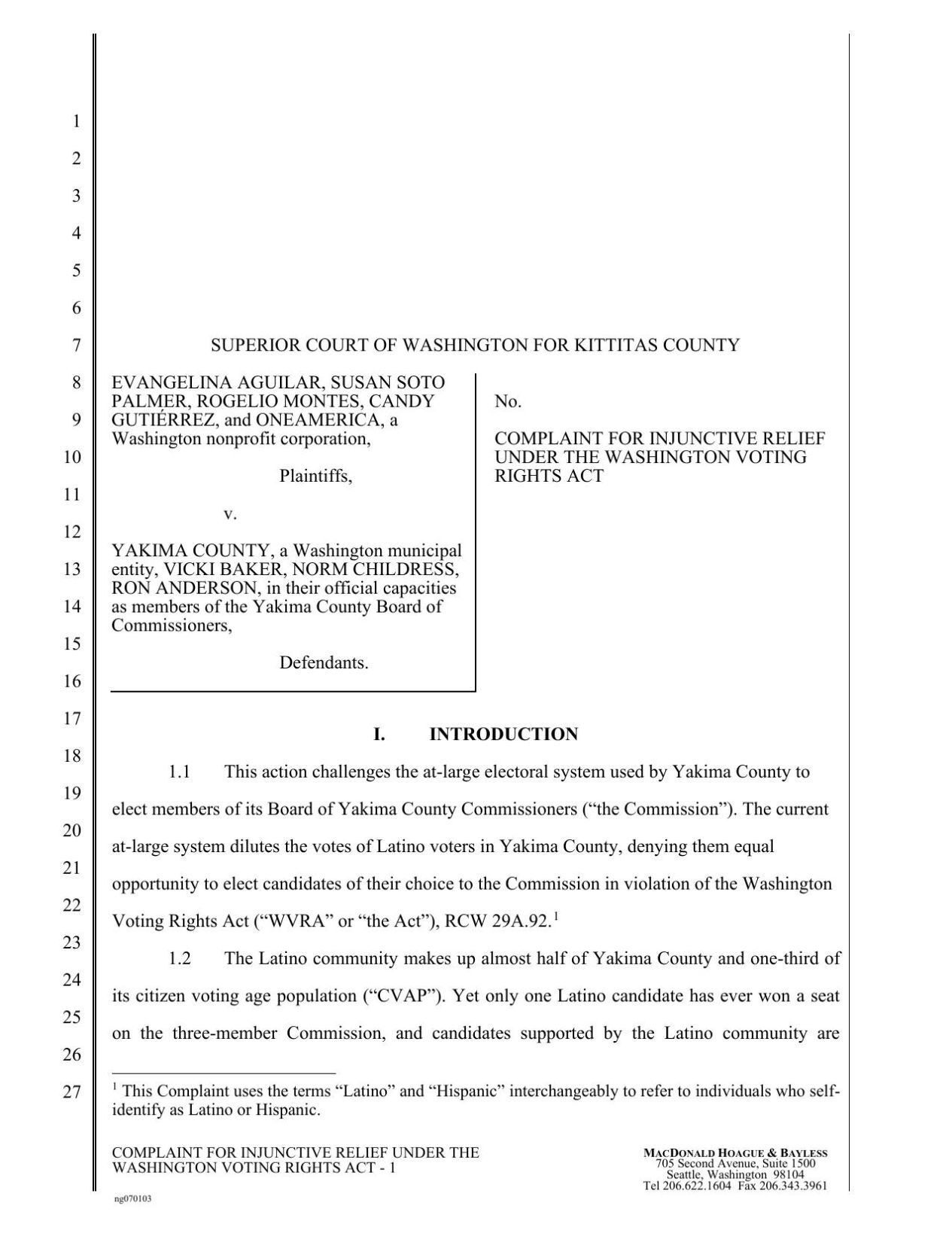 Latinos now account for more than half the county’s population, according to the 2020 Census.

“They must be counted, they must be heard, they must be represented equally and fairly,” said OneAmerica Executive Director Roxana Norouzi. “This settlement has ramifications across the state. It proves that voting systems that suppress representation by any group of voters is a violation of our democracy as our freedom.”

Only one Latino has been elected to the county commission since 1998 — Jessie S. Palacios, who represented District 3 from 1998 to 2006, the county’s election office said.

Part of the issue is the election structure. Commission candidates are selected as single-district members by voters in their respective districts in primary elections but become at-large in general elections and subject to a countywide vote.

A trial was set to begin Tuesday, but commissioners agreed to a settlement two days before that.

Yakima County commissioners issued a news release in Spanish and English in support of the settlement Wednesday afternoon, saying one of the new commission districts will be composed of a Latino majority.

“The settlement is a win for the County because it serves the best interests of voters in Yakima County and Washington,” the release said.

In the release commissioners said they were successful in preventing one provision initially requested in the settlement — ranked choice voting. That election system requires voters to rank all candidates giving a higher score to those they favor.

“Ranked-Choice Voting can distort election outcomes because it forces people to cast votes for a list of candidates they do not support. Voters in Yakima County should not be forced to cast a vote for anyone who is not their first choice. The Commissioners made sure that this scheme was not successful in Yakima County,” the release said. 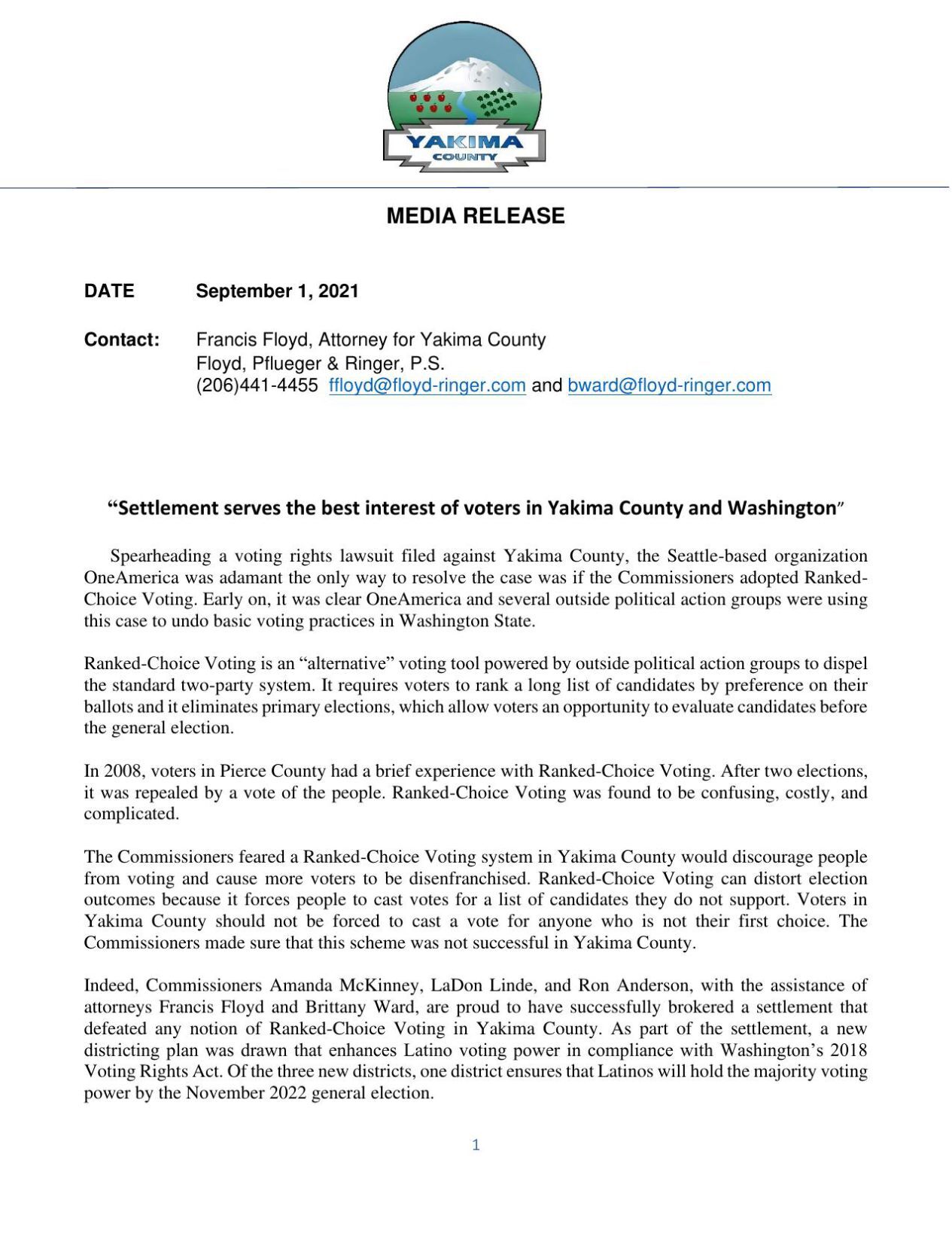 Several years ago the Yakima City Council faced a similar lawsuit filed the American Civil Liberties Union. A federal judge in 2015 ruled in favor of the ACLU and the City Council was forced to hold an election for all seven seats, and new council districts were drawn to assure a majority Latino district.

The change led to a swell of Latino candidates and the historic 2016 election of three Latina candidates — Gutierrez, Carmen Mendez and Alvina Gutierrez.

Now the county will have to opportunity to review the new commission district map and compare it to the 2020 Census data before it goes to a judge for final approval, said Campaign Legal Center attorney Annabella Harless.

“It will make county government more inclusive, equitable and responsive to the needs of our clients and all residents of Yakima County,” she said.

Dulce Gutierrez said the change will lead to improvements in impoverished areas where services and amenities are lacking.

“This settlement allows us to elect leaders by district and ensure that we can elect leaders like us,” she said. “We can fight for bilingual access, increase investments in the east side and a COVID response that leaves no one behind.”

Norouzi said communities throughout the rest of the state should take note of the settlement.

“If your election system is discriminatory, if it allows a slim white majority to dictate health boards, language access and funding decisions — it’s on its way out,” she said.