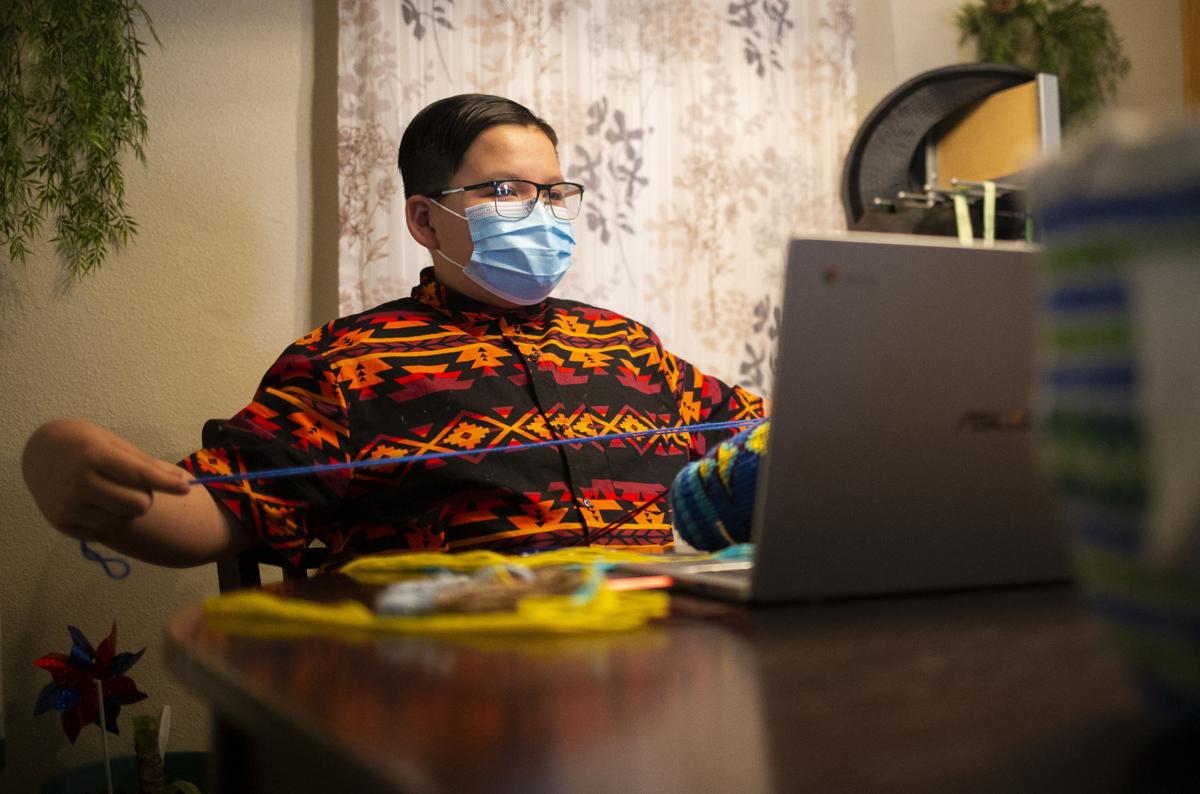 Cecil Eppinette prepares to meet remotely with a group of weavers for Wa'paas Wednesday, a virtual class held by Yakama Nation Behavioral Health, on Wednesday, March 17, 2021 in Toppenish, Wash. 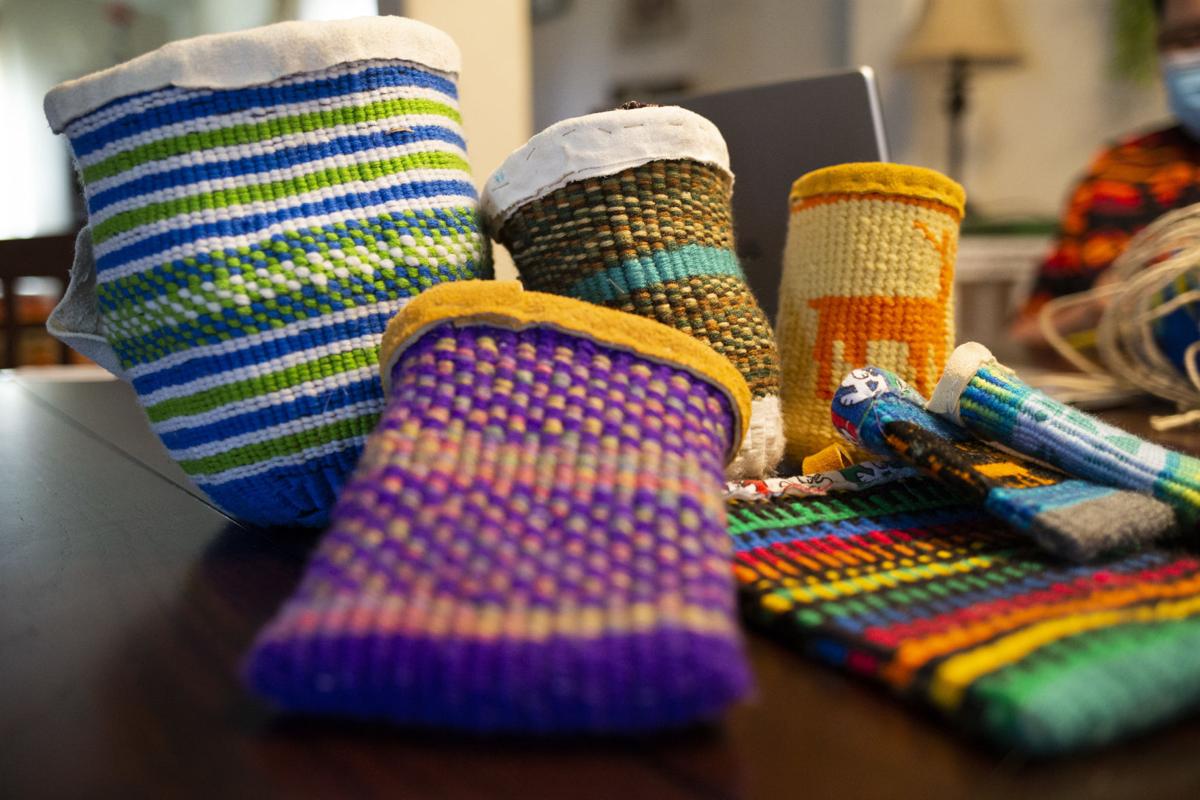 A variety of wa'paas bags made by Cecil Eppinette sit together on his family's dinner table on Wednesday, March 17, 2021 in Toppenish, Wash. 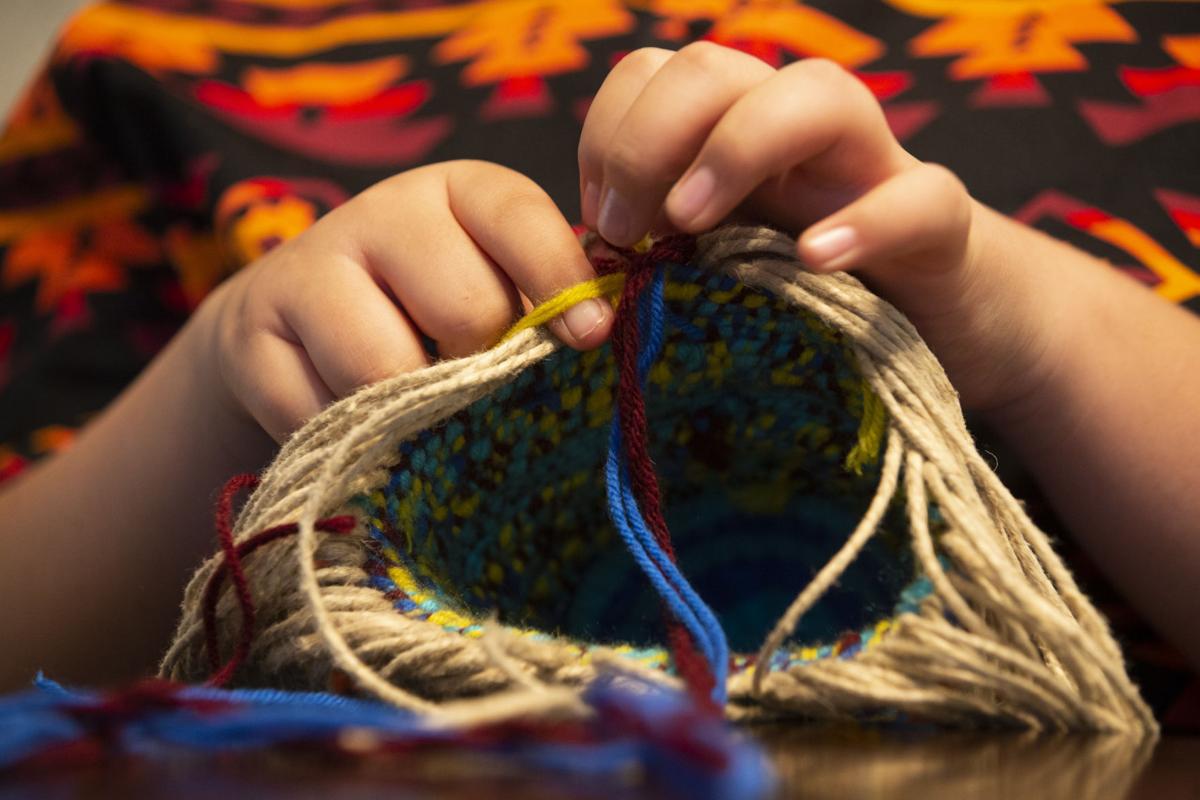 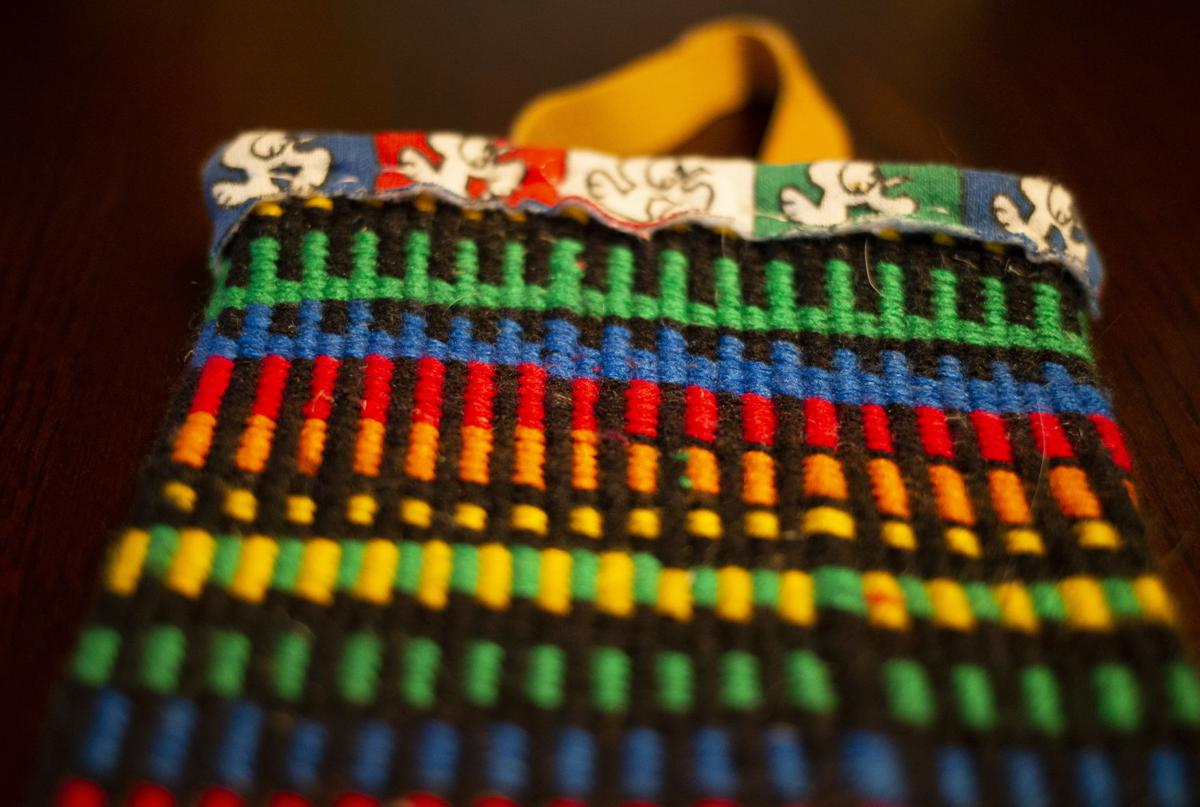 A wa'paas weaved by Cecil Eppinette sits on his family's dinner table on Wednesday, March 17, 2021 in Toppenish, Wash. Eppinette said this bag is his favorite he has made so far. 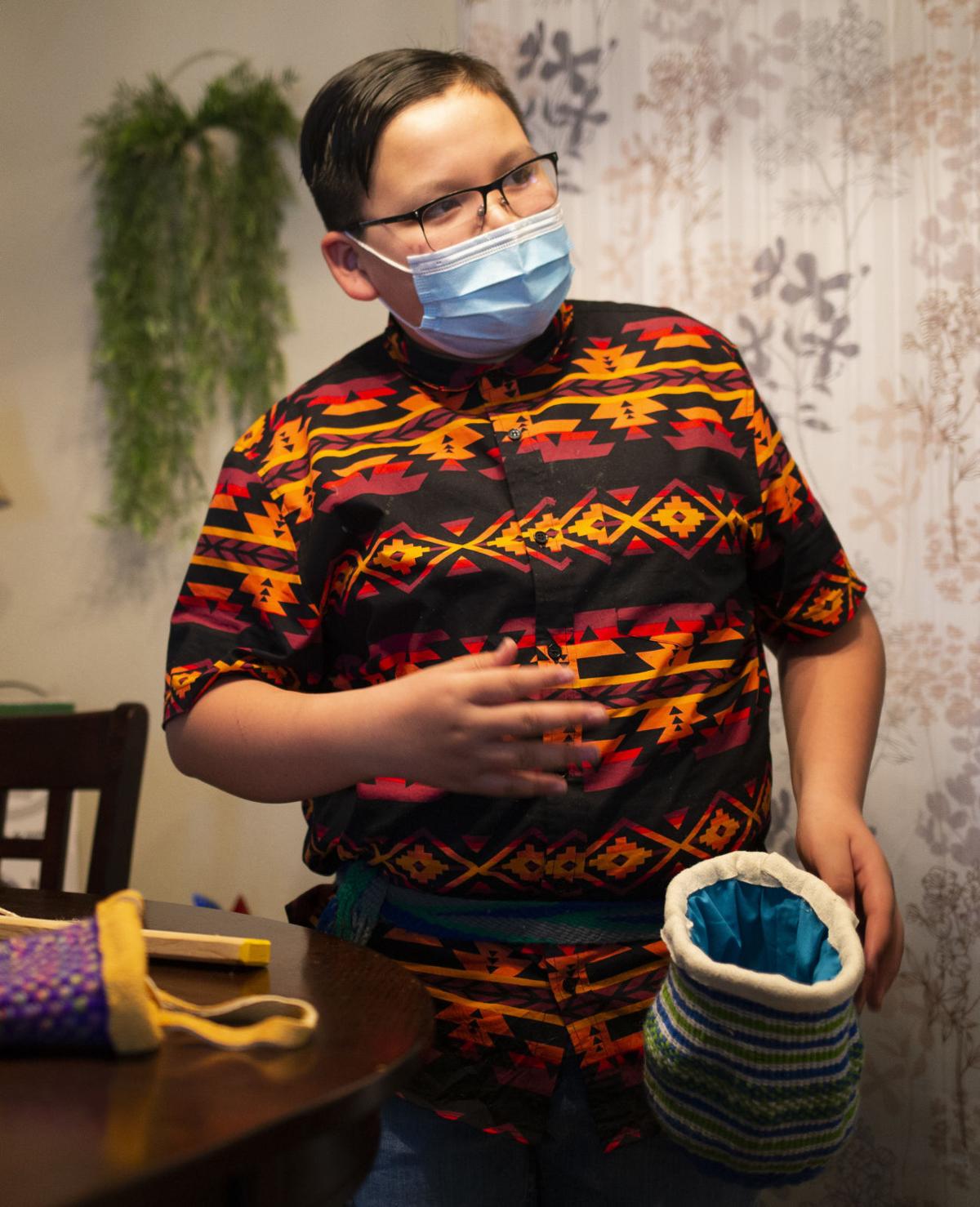 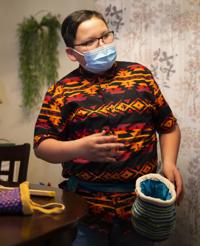 Cecil Eppinette shows how to attach a wa'paas to himself using a yarn belt on Wednesday, March 17, 2021 at his family's home in Toppenish, Wash.

Cecil Eppinette prepares to meet remotely with a group of weavers for Wa'paas Wednesday, a virtual class held by Yakama Nation Behavioral Health, on Wednesday, March 17, 2021 in Toppenish, Wash.

A variety of wa'paas bags made by Cecil Eppinette sit together on his family's dinner table on Wednesday, March 17, 2021 in Toppenish, Wash.

A wa'paas weaved by Cecil Eppinette sits on his family's dinner table on Wednesday, March 17, 2021 in Toppenish, Wash. Eppinette said this bag is his favorite he has made so far.

Cecil Eppinette shows how to attach a wa'paas to himself using a yarn belt on Wednesday, March 17, 2021 at his family's home in Toppenish, Wash.

Cecil Eppinette’s weekdays follow a familiar pattern. There’s school and homework and a little housework before he turns on his TV and settles in to weave traditional baskets known as wa’paas.

An eighth grader at Toppenish Middle School, Cecil works on his wa’paas every day, as long as he can. He creates the flexible cylindrical baskets with hemp or jute twine and yarn, and he also makes flat bags. Wa’paas are used for gathering traditional foods of the Yakama Nation and other tribal citizens in the Pacific Northwest and feature a loop so they can be carried on a belt.

“It’s like my passion,” Cecil said. When he is weaving, he feels happy. The spirit of his late great-grandmother, Annie Smartlowit, is with him when he’s making wa’paas, he said. It’s something he can work on for his culture, for his tribe.

His talent for making the baskets and bags became clear quickly when Cecil began attending virtual Wa’paas Wednesday classes in November. Chestina Salinas of Yakama Nation Behavioral Health hosts the classes, which are open to the public. They not only support participants as they learn and grow in making traditional crafts, but also keep them connected amid the isolation of the pandemic and help build resilience.

Weaving is self-care, participants say, which is crucial as the pandemic continues.

The pandemic has disproportionately impacted tribal communities. Some families have lost several members to COVID-19. Many others contracted the virus, with some struggling to recover even after long hospital stays. As of March 16, there have been 1,530 cases of COVID-19 documented within the Yakama Nation and 49 deaths of Yakama citizens, according to a post on the Yakama Nation Info Facebook page.

Cecil and other Wa’paas Wednesday participants have supported each other during the pandemic as they’ve learned to make the baskets and flat bags or have improved their efforts. They range in age; “I think I’m the youngest weaver,” he said.

Beaders join the group, too; all crafters are welcome, Salinas said. Cecil has several aunties who bead and he’s beaded since fifth grade, but has laid that aside since making his first wa’paas basket in the weekly classes.

The 14-year-old has even has created a Facebook group — Wa’paas basket — where he hosts his own weaving classes, teaching what his great-grandma knew and what grandma Nancy Smartlowit knows.

“Our family calls him the little old man — he has a little old man soul,” said his mother, Julie Smartlowit. Cecil, who is the son of Victor Watlamet and older brother of Carol Eppinette, likes to go to Shaker Church, his mother said. He takes any opportunity to learn from his elders, she said.

His participation in Wa’paas Wednesday began after Cecil reconnected on Facebook with Salinas, who was his Head Start teacher. “Once I found Ches had Facebook, I sent her a friend request. She asked me to join the weaving group,” said Cecil, who wants to be an artist when he grows up.

The virtual Wa’paas Wednesday events have the easygoing feel of in-person classes. Participants ask for guidance and share their ideas with each other, including “kuthla tricks.” As noted during class last Wednesday, kuthla is the Ichiskíin word for maternal grandmother and ulla is one’s paternal grandmother. Ichiskíin, also known as Sahaptin, is the language spoken by the Yakama people in Washington, Oregon and Idaho.

Language is among the cultural and traditional knowledge shared at Wa’paas Wednesday classes. During last Wednesday’s class, one woman mentioned that she’s Modoc and wants to learn how to make Modoc baskets. Participants also showed what they were working on.

Cecil held up a flat bag he made in two days. “That is so amazing,” one woman said.

It’s a creative process. Cecil likes using multicolored yarn, which makes its own unique design. “I just go along with it. I’ll start (a wa’paas), then I’ll think about it and I’ll start it again,” he said. Sometimes he will work on a wa’paas so long, his fingers start aching, he said.

His creations vary in size. Julie has attached some of the smallest ones to necklaces. One still underway is thumb-sized. The first big one he made, which could hold several small apples, is in Seahawks colors. He has also made a bell bag, to hold bells used in traditional Yakama ceremonies. He has sold some and has given several others away.

Which one is his mother’s favorite?

Let's Make Wa'paas classes have begun meeting in person again. They are led by Bessie Martinez for others to learn about weaving the baskets and sometimes expand beyond weaving to other traditional arts and crafts.

The classes began meeting in person Tuesday in Yakima. Eight people attended that class, which took place in a garage to ensure adequate ventilation.

Martinez originally held the classes in her home and has taught the classes for a few years in Toppenish and Yakima. She had not held an in-person class for a year due to the COVID-19 pandemic.

The next Let's Make Wa'paas class will take place from 6 to 8 p.m. Tuesday in Yakima. The classes are free, but donations are welcome. People should follow COVID-19 safety precautions. Call Martinez at 509-901-7677 for more information.

A brisk winter breeze ruffled luminaries as people placed them a few feet apart on both sides of Fort Road, starting at Karlee’s Koffee and co…