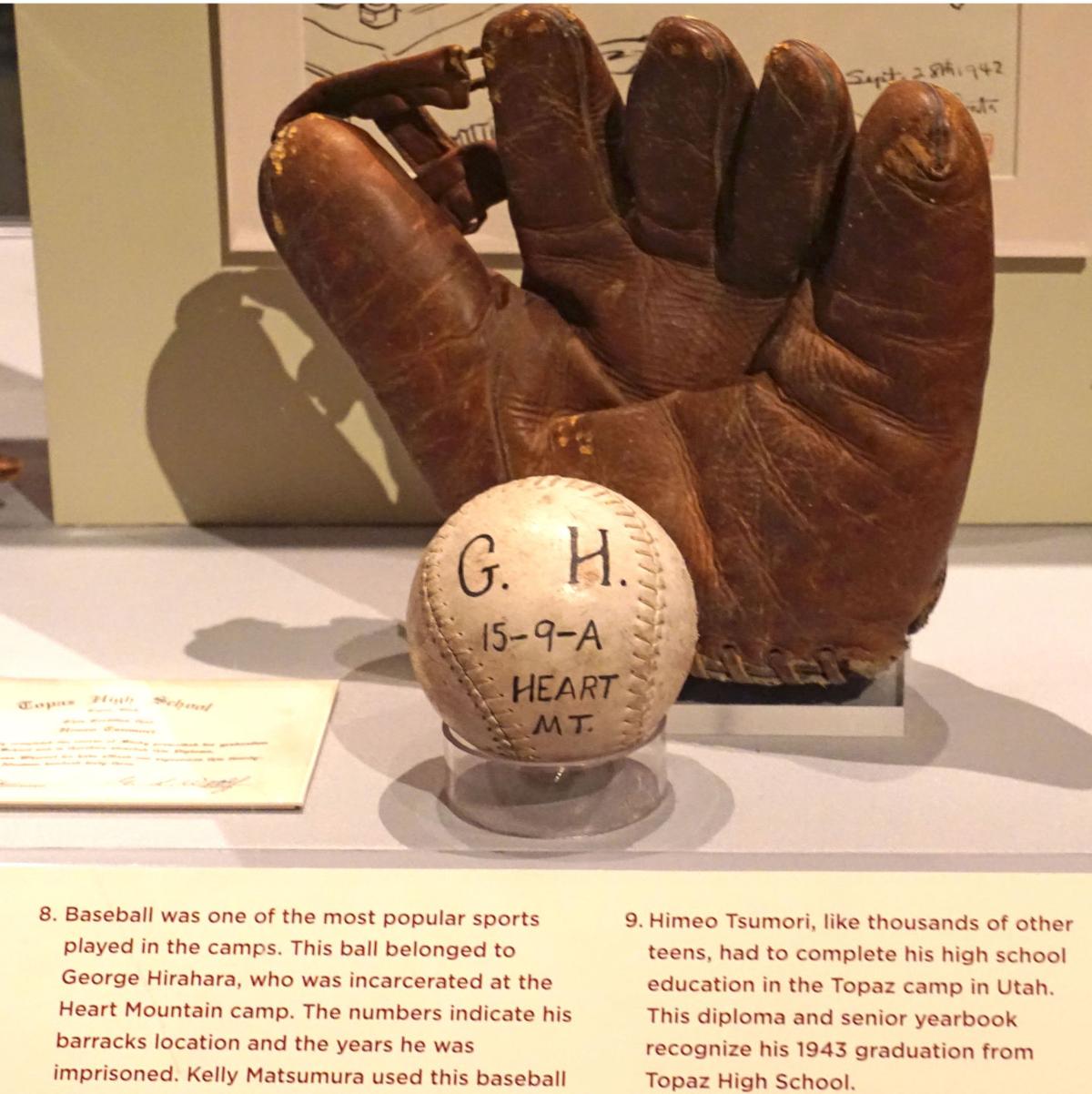 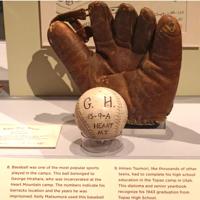 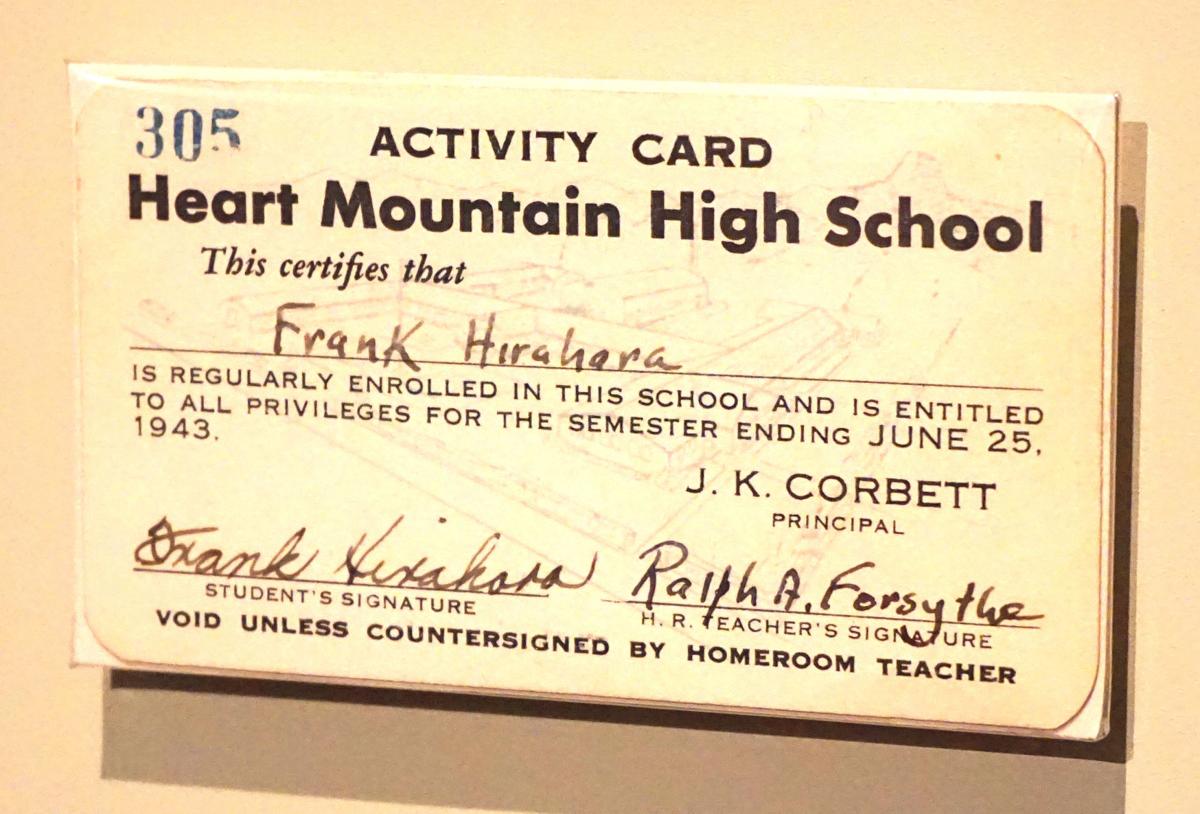 Items kept by a Yakima father and son during their incarceration at Heart Mountain, Wyo., during World War II are on display at The Smithsonian’s National Museum of American History as part of a yearlong exhibition.

“Righting a Wrong: Japanese Americans and World War II” is centered on the original Executive Order 9066 document on loan from the National Archives.

Considered the largest private collection of photos depicting life in the camp at Heart Mountain, it contains more than 2,000 images taken and processed by father and son from January 1943 to November 1945.

“I am so pleased that a part of Yakima history is now on display at the Smithsonian and the honor it brings to the people of Yakima,” Hirahara said in an email. She attended the exhibition opening last week.

Feb. 19 marked the 75th anniversary of Executive Order 9066 signed by President Franklin D. Roosevelt. It set in motion the imprisonment of 75,000 Americans of Japanese ancestry and 45,000 Japanese immigrants who were prohibited from becoming naturalized American citizens. They were housed in 10 large, barbed wire-enclosed incarceration camps and dozens of other installations west of the Mississippi from March 1942 to March 1946.

In early June 1942, a total of 1,017 Japanese-Americans were taken from Yakima County to the Portland Assembly Center in Portland, Ore. After three months, they were transported to Heart Mountain. Only about 10 percent returned to the Yakima Valley after the war.

Personal objects in the Smithsonian exhibition include the Medal of Honor awarded to Pvc. Joe M. Nishimoto of the 442nd Regimental Combat Team, objects collected from incarcerated families that depict life in the camps and many historical images.

“When I was young, I always heard about the Smithsonian and I never thought one of my family’s artifacts would ever be displayed there,” Hirahara said.

The dream became a reality in 2015 when her grandfather’s softball from Heart Mountain was on display at the Smithsonian National Museum of American History’s “Price of Freedom — Americans at War” exhibition. It had been on display at the Yakima Valley Museum from 2010 to 2014.

“So, when I went to the National Museum of American History for the unveiling of its new exhibition ... last week, I was totally surprised to see that same softball, my father’s Heart Mountain High School activity card and a photo from the Washington State University George and Frank C. Hirahara Collection of Heart Mountain in the exhibition,” she said.

George Hirahara built a darkroom and photo studio beneath his family barrack. He and his son captured images of camp life and special family milestones, such as engagement celebrations, weddings and family portraits.

Patti Hirahara’s great-grandfather, Motokichi Hirahara, came to the Yakima Valley in 1909. Her great-grandmother Sato and grandfather George arrived in 1910.

George ran the Pacific Hotel in Yakima, at 10 1/2 S. First St. in the city’s Japan Town district, from 1926-42. The Hirahara family lived in rooms on the top floor.

After the war, Frank became an aerospace engineer and worked with NASA on the Apollo missions and America's space program. His activity card and his father’s softball have become part of the permanent collections of Japanese American history at the National Museum of American History.

John Gray, museum director, said it is through the personal objects such as those that visitors will be able to understand the individual stories and experiences of Japanese Americans during that time period.

“We are grateful to the former detainees and their descendants for sharing these objects with the nation to illuminate this complex history,” Gray said.

Yakima’s Japan Town no longer there, but rich history remains

Japanese-Americans at peace with Valley's past

Just before boarding two trains to Portland in early June, they collectively sent a letter, signed “Valley Evacuees,” to the editor of the Wapato Independent.

“We, Japanese evacuees of this valley, are extending our hands in farewell to all our faithful friends, who have done their part in making our departure from all our life’s work less miserable,” it read.

■ Watch a news report about “Righting a Wrong: Japanese Americans and World War II” at http://bit.ly/2lUlmCy

YAKIMA, Wash. -- A Yakima father and son’s visual documentation of life at Heart Mountain Relocation Center in Wyoming is the subject of a spe…

The history of Yakima's Japan Town was highlighted during a presentation earlier this month at the Franklin D. Roosevelt Presidential Library …