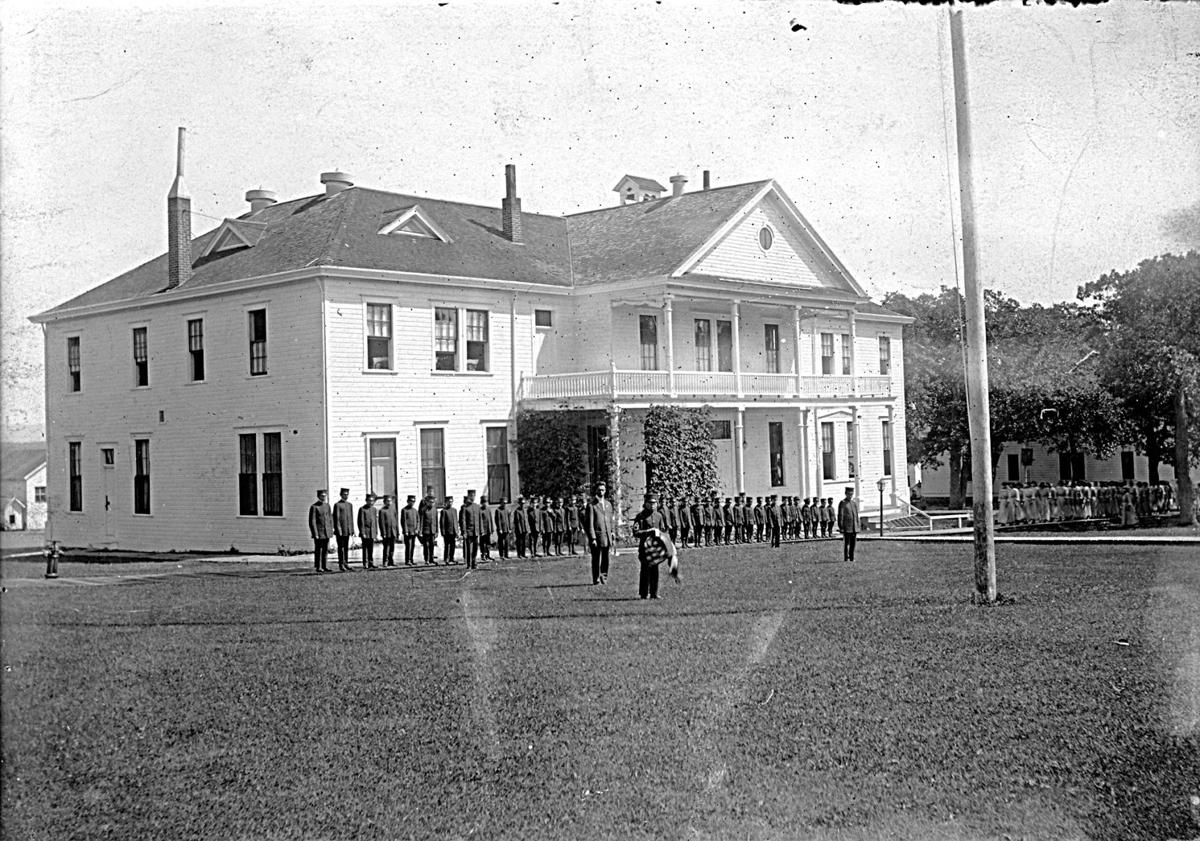 Children stand on the grounds of the Indian boarding school at Fort Simcoe around 1900. The federal government attempted to force Yakama children to assimilate into American culture and forsake their traditions. (Yakima Valley Museum, courtesy photo). 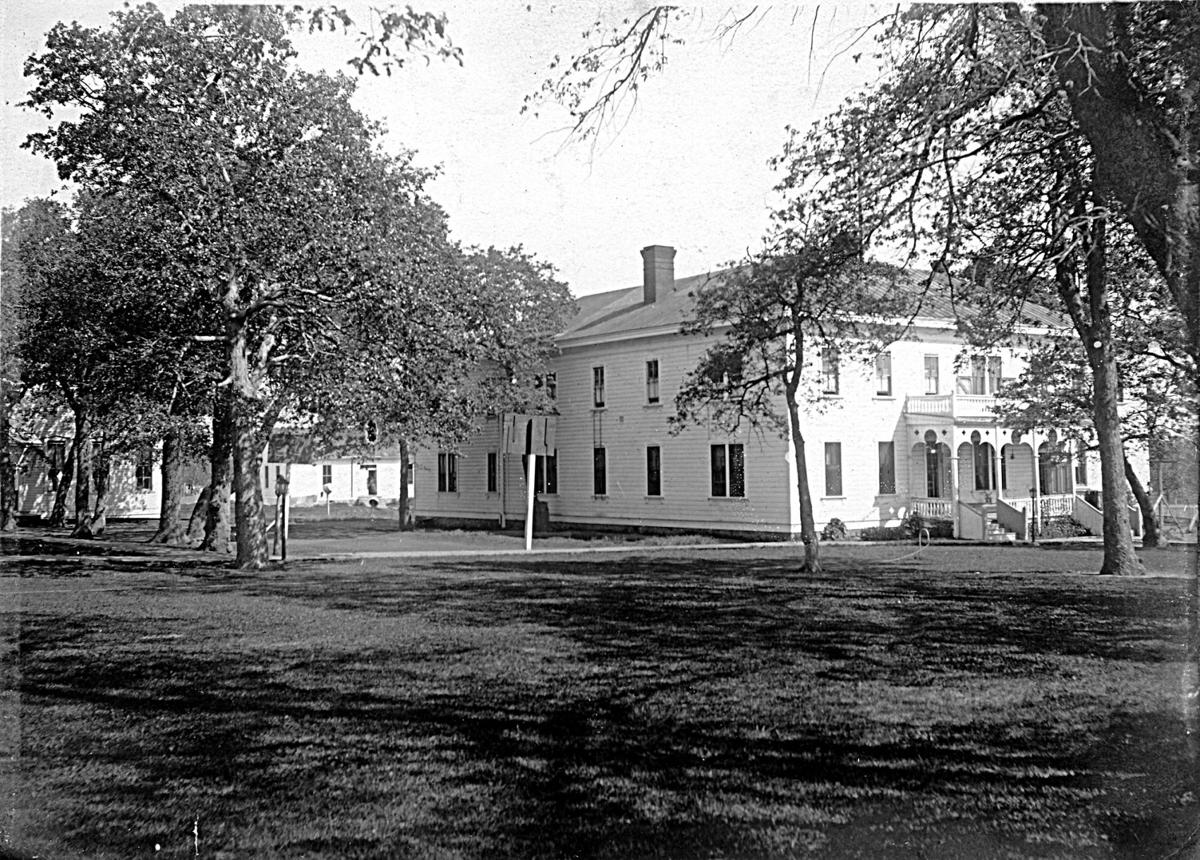 The girl's dormitory at the boarding school at Fort Simcoe, in an undated photo. (Yakima Valley Museum, courtesy photo)

Children stand on the grounds of the Indian boarding school at Fort Simcoe around 1900. The federal government attempted to force Yakama children to assimilate into American culture and forsake their traditions. (Yakima Valley Museum, courtesy photo).

The girl's dormitory at the boarding school at Fort Simcoe, in an undated photo. (Yakima Valley Museum, courtesy photo)

Fort Simcoe’s second act represents a dark chapter in the history of the U.S. government’s relationship with Native Americans in general and the Yakama Nation in particular.

From 1860 to 1922, the former U.S. Army installation was home to a government-run boarding school for Native children. The school was part of a program government officials claimed was an attempt to “civilize” Indians.

Today, historians have labeled the program an act of cultural genocide, as the institutions were meant to eradicate Native American language and traditions. And the school at Fort Simcoe was no different, as students were stripped of their culture.

Fort Simcoe was initially established to enforce the terms of the Treaty of 1855, specifically keeping white settlers from encroaching on ceded Yakama land until they were fully moved on to the 1.3-million-acre reservation in the Lower Valley.

The post was turned over to the Indian Service, the predecessor to today’s Bureau of Indian Affairs, to use as the headquarters of the Yakama Indian Agency, which served as the federal administrators of the reservation.

The Treaty of 1855, which merged 14 bands and tribes into the Yakama Nation and forced them to give up 11 million acres of territory, also mandated that trade schools be established on the reservation.

The schools were meant to teach the Yakama productive skills that would help them better assimilate into American culture. The schools’ proponents believed that Native children were the most “salvageable” members of the tribe.

This process involved eradicating any trace of Yakama culture among the students. Boys’ long hair was shorn, and Yakama names conferred in religious ceremonies were discarded as the students were baptized as Christians and given “proper” Christian and American names.

Among the names students were given were Christopher Columbus, Daniel Boone, I.I. Stevens — after the territorial governor who Yakama say forced them to sign the treaty under duress — William Penn, Abe Lincoln and Mark, Paul and Luke.

While the Yakama had welcomed Catholic missionaries earlier and hundreds of them embraced the faith, the Catholic Church was excluded from the reservation in the 1870s under President Ulysses S. Grant’s Indian Peace Program, where Protestant denominations were put in charge of schools. At Fort Simcoe, it was the Methodists.

Under Indian Agent James Wilbur, the students’ life was heavily regimented. They had to awake at 5 a.m., and after breakfast worked either in the garden, saddle, harness or clothing shops at the school, with three hours set aside for classroom study, either 9 a.m.-noon or 1-4 p.m., depending on the student’s session, and it was back to work until 6 p.m. for dinner.

At 7, they had singing and prayers before going to bed at 8 p.m.

In the 1880s, the school was rocked by diseases such as whooping cough and measles. As this happened, a harsh winter descended on the reservation, dropping 3 feet of snow in three months. Wilbur lamented that many Yakama left the area with their children for the Columbia River fisheries, where food could be found, “thus depriving their children of the benefits of the school.”

Wilbur retired in 1883, and his replacement, Robert Milroy, was not any more enlightened about Native Americans’ humanity than his predecessor. In his reports, he described Yakama parents as “barbarous” and “uncivilized” and believed that educating their children in the government-run schools was the only way to get them to become “proper” Americans.

Milroy deployed Indian police to round up children for schooling, while parents who refused to send their children to the school were fined, imprisoned or sentenced to labor.

He also was determined to eradicate the Yakama language, saying the children should be kept away from their parents until they had “thrown off” their mother tongues in favor of English.

Things did not improve after Milroy left in 1886. An inspector general’s report found that under Samuel Enyart’s administration, which lasted only six months, the pinewood beds in the school needed to be replaced with iron bedsteads to combat a vermin infestation, the buildings were in a dirty and shoddy condition, and the school’s employees “lacked snap and energy.”

Had the school been in session when he visited, the inspector general said, he would have suspended Enyart for neglect and incompetence.

The superintendent’s position changed three times in the course of a year, with a report finding that the Yakama students were restive because of maltreatment they had received at the hands of Samuel Motzer. Nine girls had run away from the boarding school rather than be subjected to Motzer’s harsh discipline for breaking school rules, which included whipping children so much that their skin bruised. Two died from the blows.

The school was closed in 1922, when the Yakama Agency was relocated to Toppenish, and the children either attended local public schools or were sent to boarding schools in Oregon and Kansas.

Today, Fort Simcoe is a state park, with exhibits explaining the history of the school and the fort.

Meanwhile, people continue to grapple with the devastating legacy of Indian boarding schools today, and the effect on Native communities. In 1969, a Senate report concluded the “dominant policy . . . of coercive assimilation” has had “disastrous effects on the education of Indian children.”

In 2000, when he was the assistant secretary of the Bureau of Indian Affairs, Kevin Gover apologized to Native Americans for historic abuses by the BIA including brutalizing their children “emotionally, psychologically, physically and spiritually” in boarding schools.

It Happened Here is a weekly history column by Yakima Herald-Republic reporter Donald W. Meyers. Reach him at 509-577-7748 or dmeyers@yakimaherald.com. Twitter: @donaldwmeyers.