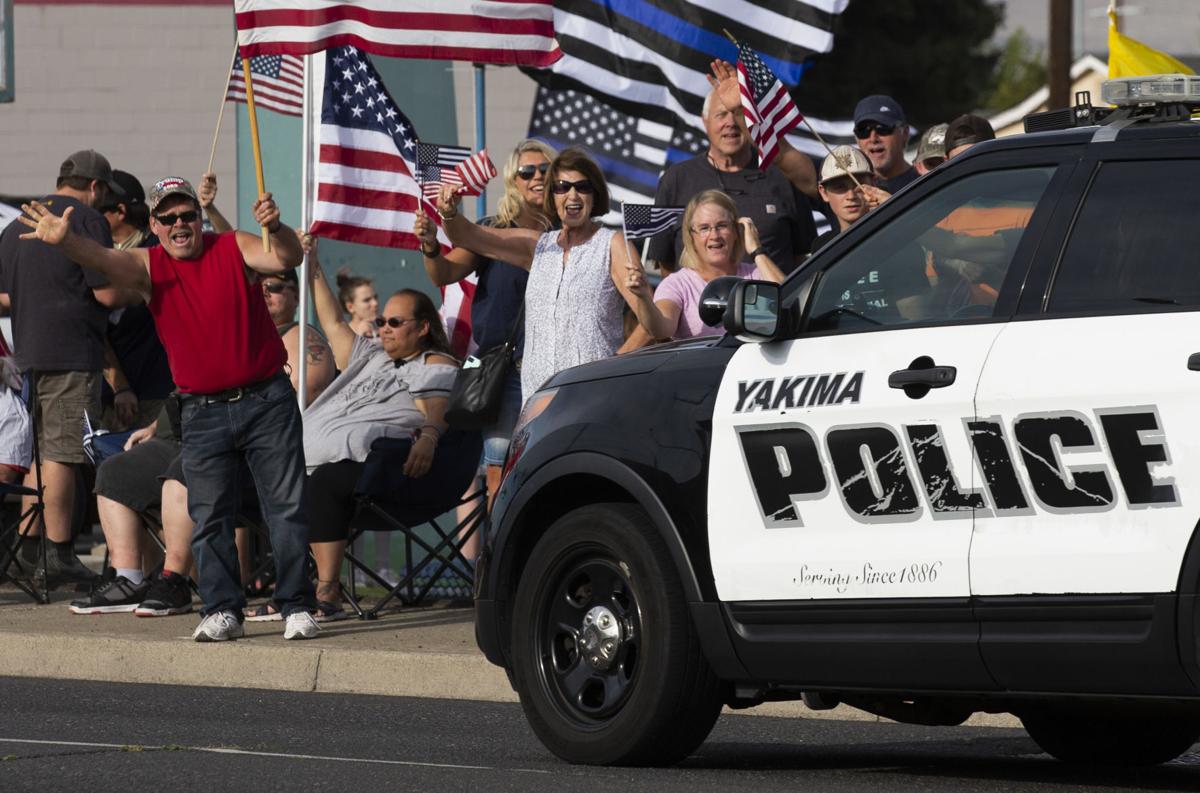 People gathered along South First Street for a "Back the Blue" rally cheer as a Yakima Police vehicle drives past on Saturday, Aug. 29, 2020 in Selah, Wash. 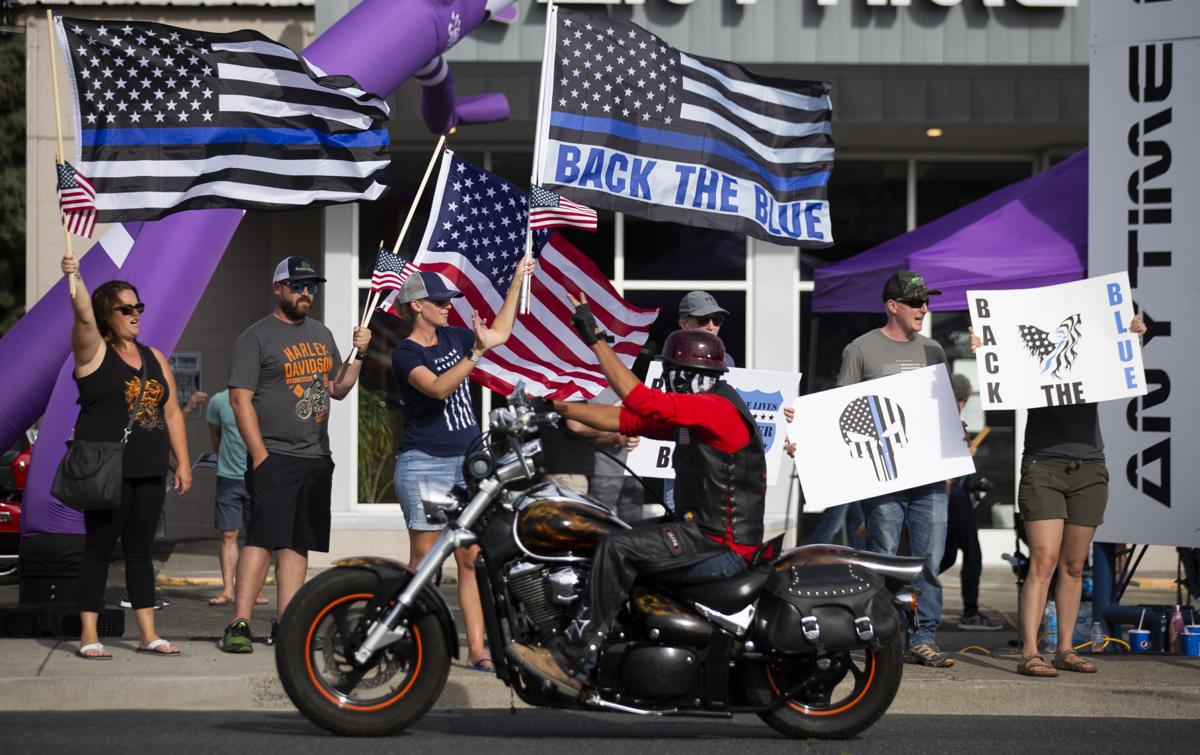 People wave flags and hold signs in front of Anytime Fitness during a "Back the Blue" rally on Saturday, Aug. 29, 2020 in Selah, Wash. 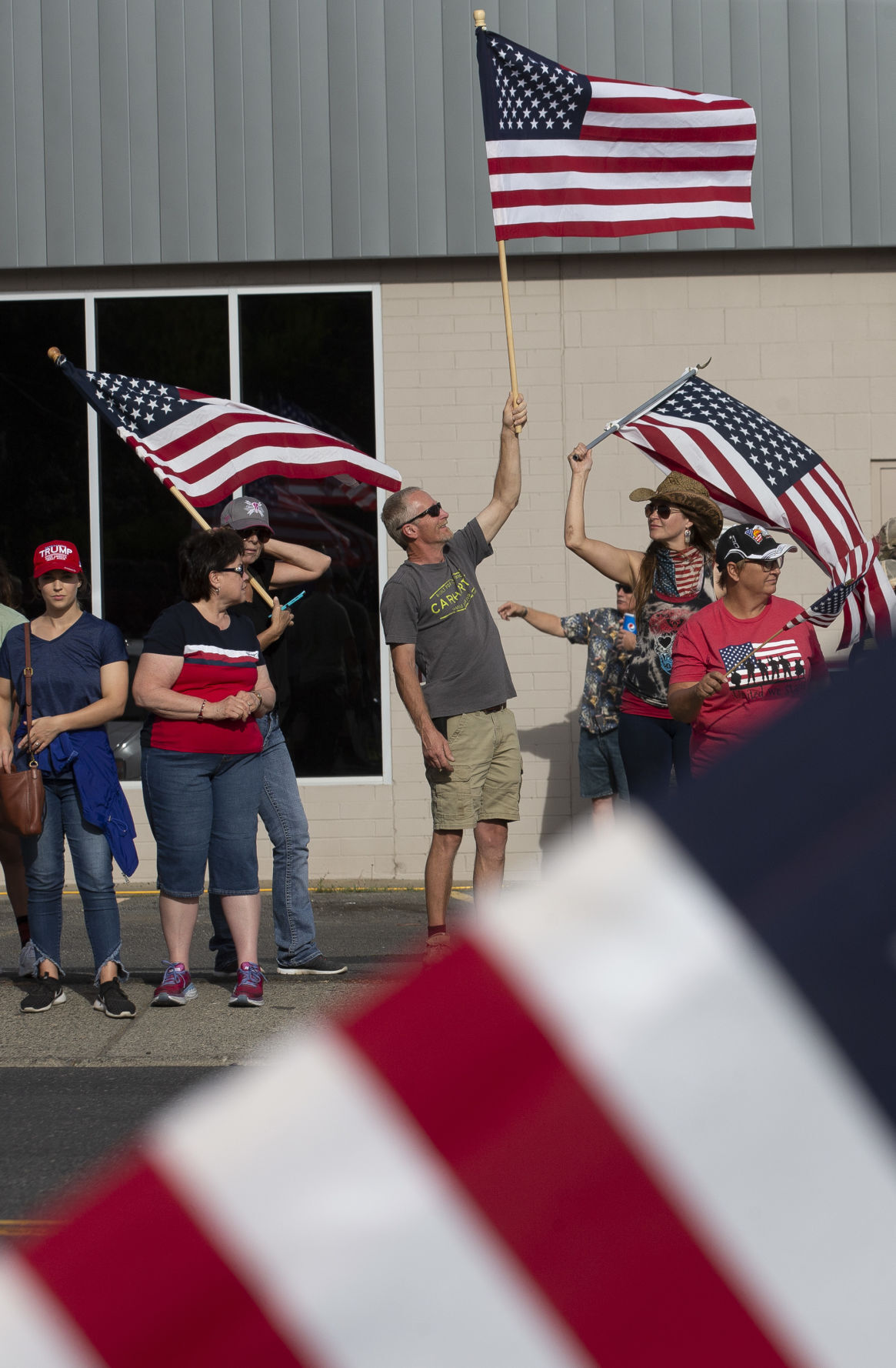 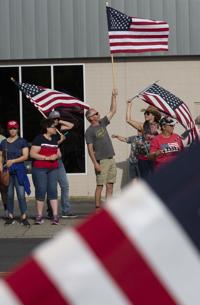 People wave American flags during a "Back the Blue" rally on Saturday, Aug. 29, 2020 in Selah, Wash. 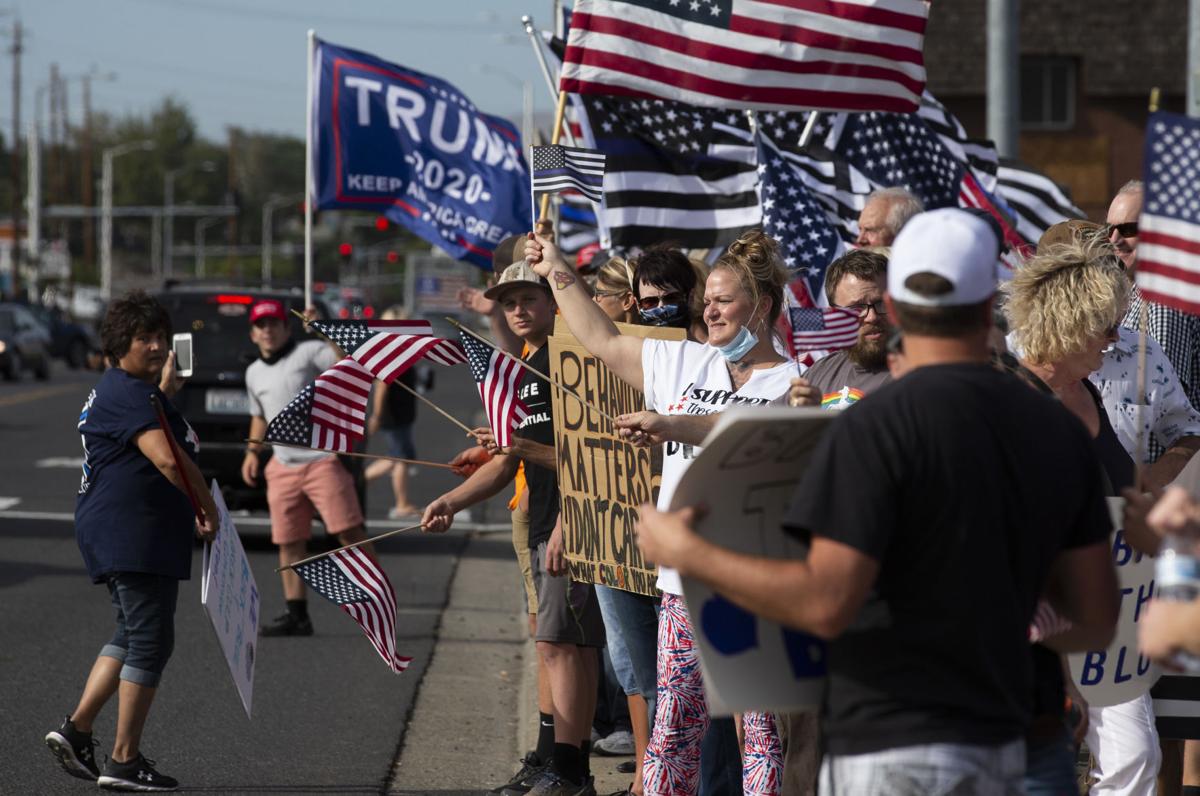 Hundreds of people line South First Street during a "Back the Blue" rally on Saturday, Aug. 29, 2020 in Selah, Wash.

People gathered along South First Street for a "Back the Blue" rally cheer as a Yakima Police vehicle drives past on Saturday, Aug. 29, 2020 in Selah, Wash.

People wave flags and hold signs in front of Anytime Fitness during a "Back the Blue" rally on Saturday, Aug. 29, 2020 in Selah, Wash.

People wave American flags during a "Back the Blue" rally on Saturday, Aug. 29, 2020 in Selah, Wash.

Hundreds of people line South First Street during a "Back the Blue" rally on Saturday, Aug. 29, 2020 in Selah, Wash.

Several hundred Yakima County residents packed the sidewalks of First Street Saturday evening in Selah to “Back the Blue,” showing their support for local law enforcement.

Trump 2020, Thin Blue Line and American flags were waved by many, while others held handmade signs with phrases like “Back the Blue” and “All Lives Matter.”

“Our country needs to be in support of the people out there keeping our streets safe and protecting us,” said Amy Ruiz, a West Valley resident who joined the demonstration with her husband and two young children.

The demonstration was the first organized, pro-police demonstration in Yakima County since calls for defunding the police arose nationwide earlier this year in response to police-involved deaths, including those of George Floyd and Breonna Taylor.

Locally, Black Lives Matter supporters have held multiple anti-racism demonstrations in Yakima and Selah, and have called for law enforcement reform. Tensions have been high in Selah, where city leaders have been criticized for their response to the movement.

That’s part of what brought Selah resident Bob Dexter to the streets. His dad is a retired police officer, he said, and he hates seeing disrespect directed toward officers. He said he was encouraged by the large crowd.

Chelsea Paganelli, who works in the Yakima County prosecutor’s office, said she joined the demonstration to help boost morale in law enforcement, which is otherwise low. Her husband, Justin Paganelli, and dad, Larry Gamache, spent their careers as deputy sheriffs. Paganelli said she hopes people like them know local community members “have their six” — a term referring to someone’s six o’clock position, or their back.

Masks were scant Saturday. Paul Bland was among the few to don one. He chose to wear one to make a statement: He wants Gov. Jay Inslee out of office, so wore a mask with “Inslee” crossed out.

“We’ve got to support the PD,” said Bland, a Yakima resident holding a sign reading “Cops are tops,” referring to the police department. “It might be a cliche, but cops run towards danger. You and I would run away from it. That’s what makes them so exceptional.”

“Anybody that is shot is just awful. But (police) have to react in split seconds, so things may not come out the way we all want them to,” he said. “I don’t know how to remedy that. I don’t see how there can be any training for something like that.”

Bland said his heart goes out to the families of those who have lost loved ones to police use of force. He also has empathy for the officers, he said, who have to live with that harsh reality for the rest of their lives.

Mike Russell, a patrol sergeant for the Yakima County Sheriff’s Office for roughly 25 years, said the criticism of police is a cherry-picking of facts, since the deaths focused on by the Black Lives Matter movement account for a handful of countless use-of-force incidents with police nationwide every year. He said it made him worry about if someone were to be injured or killed on his watch.

“If he happens to be a person of a different race, am I going to be the next person that’s going to be on the national media as a problem in society?” Russell asked. “It causes law enforcement to feel like they don’t have the support of the people that they protect.”

But Russell said the demonstration Saturday showed that was not the case in Yakima County.

“The wonderful thing about what’s taking place here is (it’s) reminding us that we have ... support.”