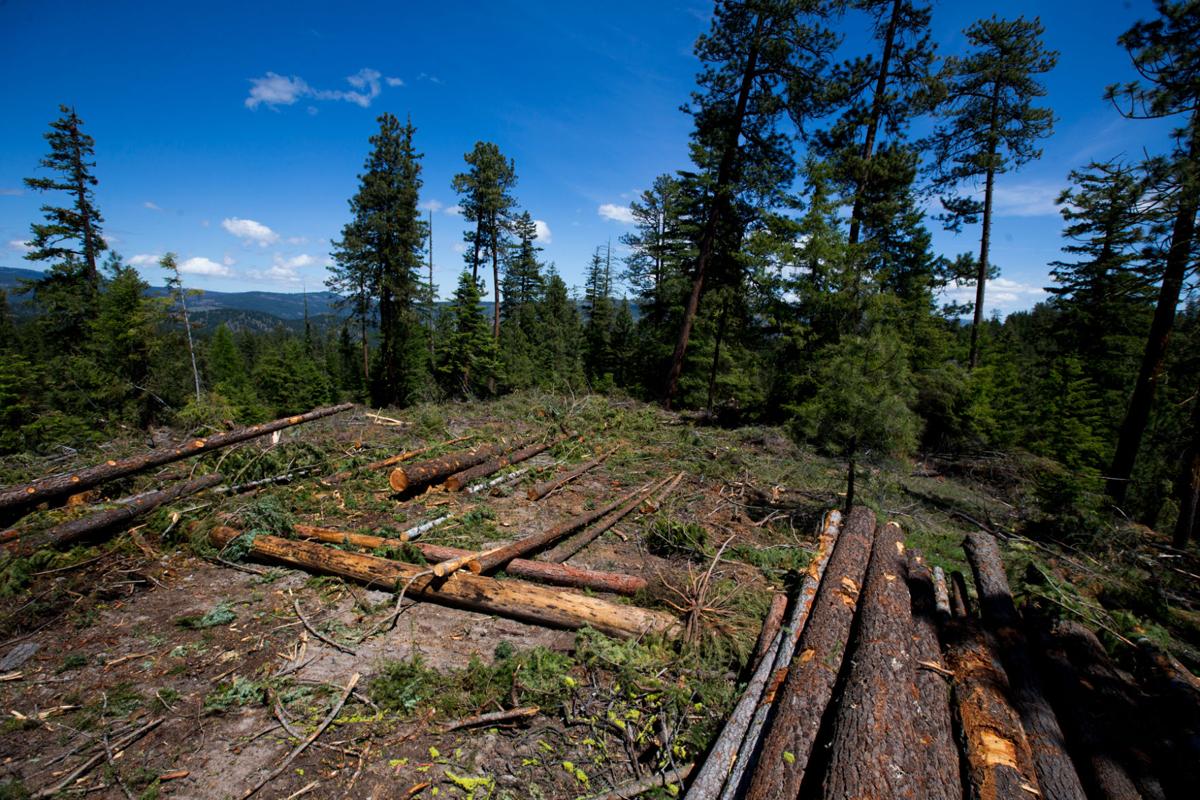 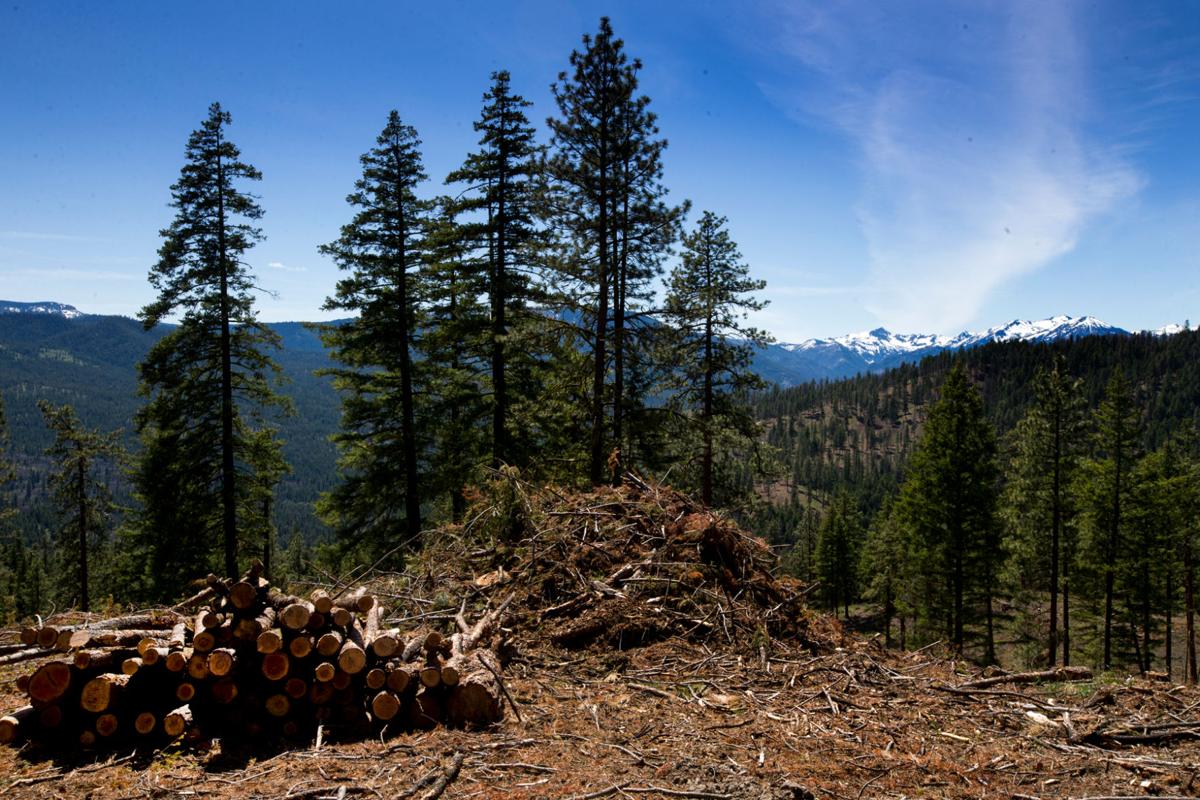 In this view looking west, timber is seen near the Rattlesnake River drainage near Nile, Wash. on Friday, June 2, 2017. (JAKE PARRISH/Yakima Herald-Republic)

In this view looking west, timber is seen near the Rattlesnake River drainage near Nile, Wash. on Friday, June 2, 2017. (JAKE PARRISH/Yakima Herald-Republic)

A new collaborative approach hopes to show responsible environmental stewardship can boost the health of Washington’s forests and the state’s regional economies.

Efforts to work together toward the common goal of improving the forest trace back to the formation of the Tapash Sustainable Forest Collaborative in 2007. Its focus continued to narrow as the Little Naches Working Group, with 40 regular members representing a wide variety of interests and expertise, helped the Forest Service develop plans for the nearly 57,000-acre Little Crow Area.

Work previously done on a 711-acre parcel of the Okanogan-Wenatchee National Forest in southern Kittitas County and a small part of Yakima County makes it the ideal starting point for Little Crow restoration, says U.S. Forest Service spokeswoman Holly Krake. And, significant commercial logging efforts to reduce the risk of wildfire should provide jobs and add revenue to help pay for future treatments to restore a more natural state.

“You’re looking at a suite of different benefits, including recreation improvements, road improvements and native fish habitats,” Krake said. “All of that brings tourism.”

Little Naches Working Group chair Lloyd McGee of The Nature Conservancy credited the Forest Service for its transparency and responsiveness that led to “strong agreement” with the prescriptions for restoration, especially when it comes to logging. After 25 years of protecting all trees on federal land decimated the logging industry’s workforce, some of those remaining still question the Forest Service’s approach.

Olney attended a few meetings and came away excited about the largest logging project undertaken by the Forest Service in several years. It’s expected to produce around 26 million board feet — 1-foot wide and 1-inch thick wood — that an economic study done by the forest service projected would support more than 160 jobs and generate more than $700,000 in timber value at the mill, he said.

The Yakama Nation would like to continue its work with the Forest Service that began last year with a smaller, ongoing dry stewardship project near Nile Creek off State Route 410.  Boise Cascade also hopes to participate,  said forest policy analyst Lindsay Warness in an email.

But she acknowledged the project could go solely to the tribe, which Olney said wants to be a leader in implementing the restoration it has advocated for nearly a decade.

“We are the last remaining sawmill in the Eastern Cascades,” Olney said of the tribe’s White Swan mill. “What we feel that we represent is the closest available market, which actually holds the value of the log out. It maximizes the return.”

Like many other companies in Eastern Washington over the past several years, Boise Cascade closed its mill in Yakima. The company would need to rely on its five mills and 650 employees in northeast Oregon for the project. Three to four consistent purchasers in the region make a large-scale effort possible, but it costs about $80-$100 per thousand board feet for Boise Cascade to haul timber to the nearest mill, Warness said.

Keeping the work local would save on transportation costs, and Olney estimates the return would be similar to the profit of $75 per 1,000 board feet made through the dry stewardship program. A larger operation would move about 12-15 truckloads of 5,000 board feet per day.

The Forest Service told Warness it expects the Huckleberry Project and future operations in the Little Crow Area to produce about 46 million board feet, although Boise Cascade anticipates about 10 percent less. The company remains concerned about what it sees as a lack of a long-term plan for restoring all portions of the landscape and improving the forest’s resiliency.

“There is concern that this is the only potential sale on the Okanogan Wenatchee National Forest and there is currently no 5-year restoration plan,” Warness said. “Without a sustainable timber supply, it is very hard to make long-term investment decisions and commitments to personnel.”

Olney said the needed volume exists, but it’s unclear what form the Forest Service’s new management practices will take. In some areas, he said a century’s worth of fire prevention and suppression left the forest with at least triple the number of trees as existed before contact with European settlers.

“The beauty of this stuff is that we have a possibility by practicing limited logging that these forest districts can actually become self-sustaining on an economic basis again,” Olney said. “It’s a win-win for everybody.”

If no objections are filed by June 9, Krake said bids would be sent out immediately to find contractors for the Huckleberry Project. Work could begin as early as late summer and last five to 10 years.

By factoring in the effects of extra cash flow in local economies along with increased demand at the mills and in the woods, McGee estimated the project could support as many as 250 jobs. Some revenue would go to the Forest Service and help maintain roads, as well as restoring floodplain and fish habitats in a larger section of the Little Crow Area.

Prescribed fire also will play a key role, both by burning fuel in areas where commercial logging is prohibited and as a follow-up to thinning. The project also creates opportunities for firewood removal, a priority identified through public comment and added to the original Little Crow restoration plan.

Up to 4.3 miles of temporary roads could be used for logging, but Krake said those would be decommissioned as soon as possible and restored to a natural state within one to two years. Signs indicating closures or delays caused by the project will be required, and hauling won’t be allowed on weekends and holidays to minimize interference with recreation.

McGee and Olney said returning the forest to a more natural state should produce a more park-like aesthetic, making visitors safer and giving them better views. Trails will be cleared of debris, and Olney said logging operations will ensure poorly maintained roads are brought up to reasonable standards, all good things in the eyes of Jeeping Nomads spokesperson Ron Rutherford.

“Will it restrict recreation a little bit for the season? Maybe,” said Rutherford, one of the leading advocates for recreation in the Little Naches Working Group. “But nothing that will impact anyone a great amount financially.”

Other environmental efforts include restoring vegetation such as huckleberry plants, treating invasive species, adding habitat protection and closing or decommissioning roads, which remains a point of contention in the Little Naches Working Group. Krake said the process of reaching out for public comment has already started for several projects in the area, and McGee said a successful first step could go a long ways toward opening up a wide variety of efforts to improve the forest for all of its users.