You are the owner of this article.
Edit Article Add New Article
You have permission to edit this article.
Edit
Home
News
COVID-19
Wildfires
Sports
Photos & Video
SCENE
Obituaries
Classifieds
Opinion
The Vanished
1 of 6 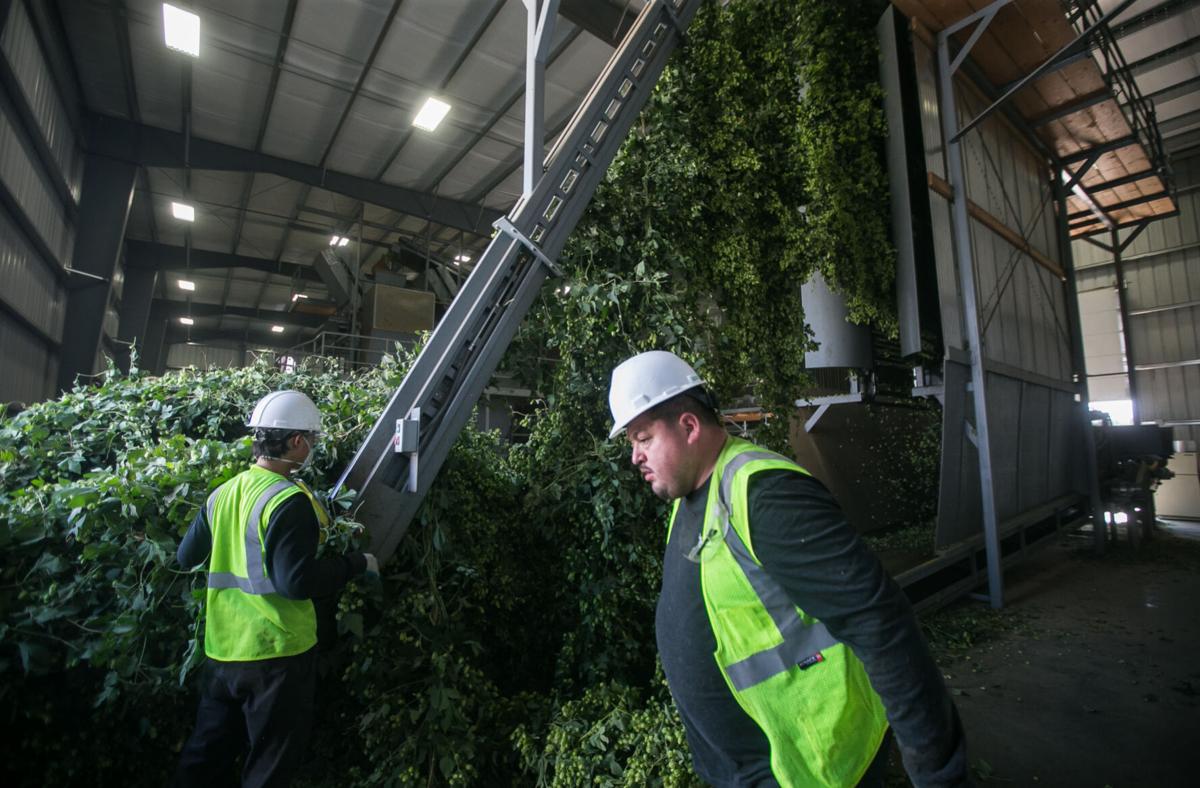 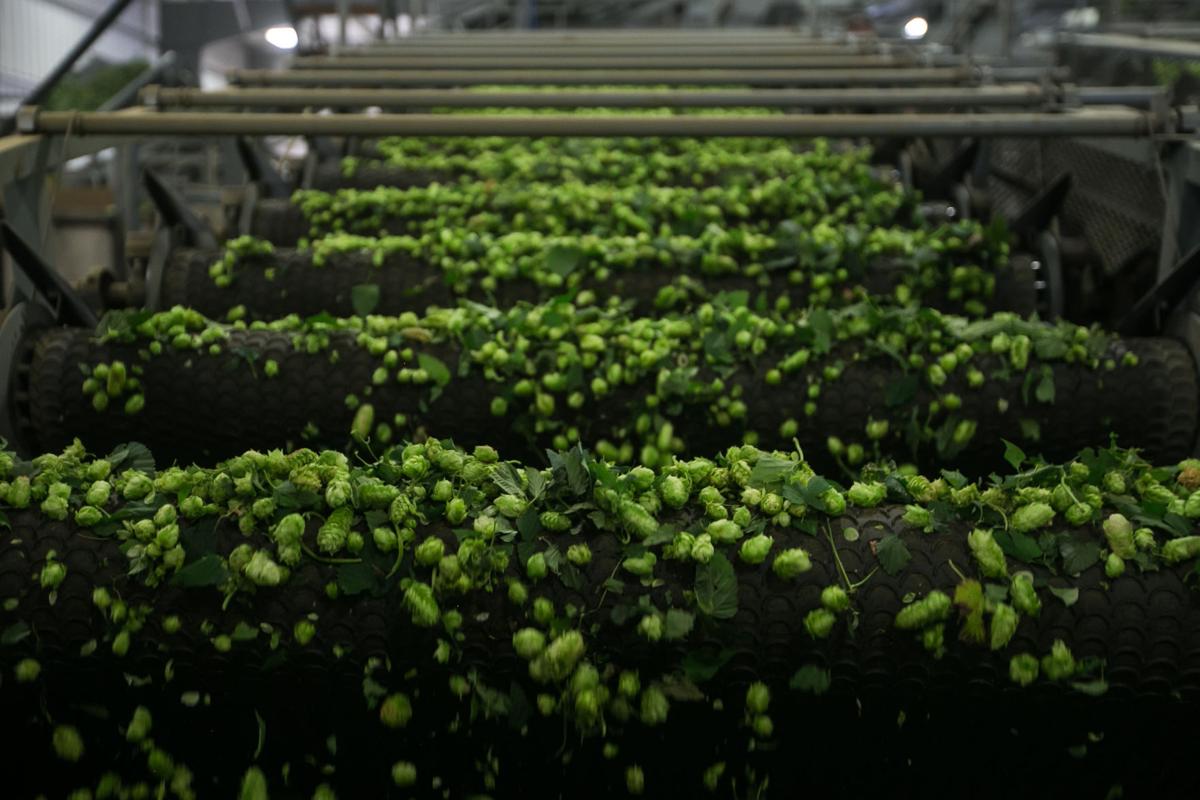 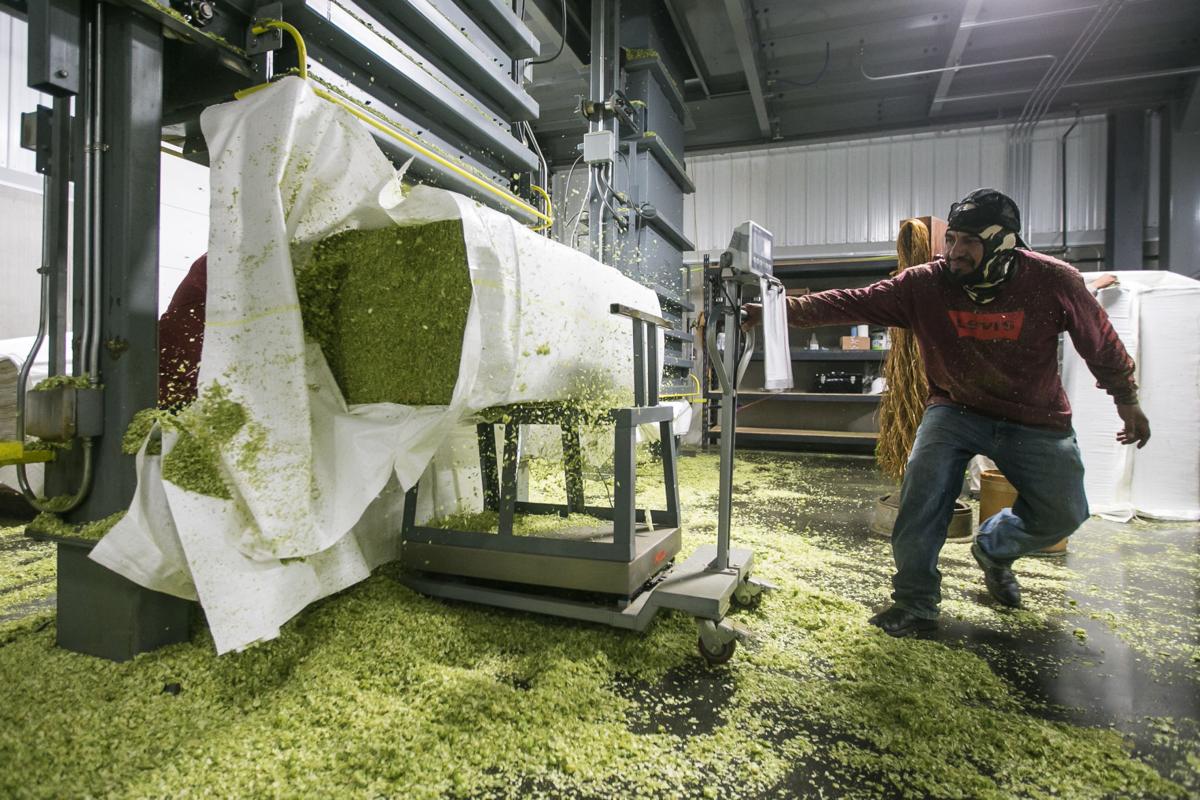 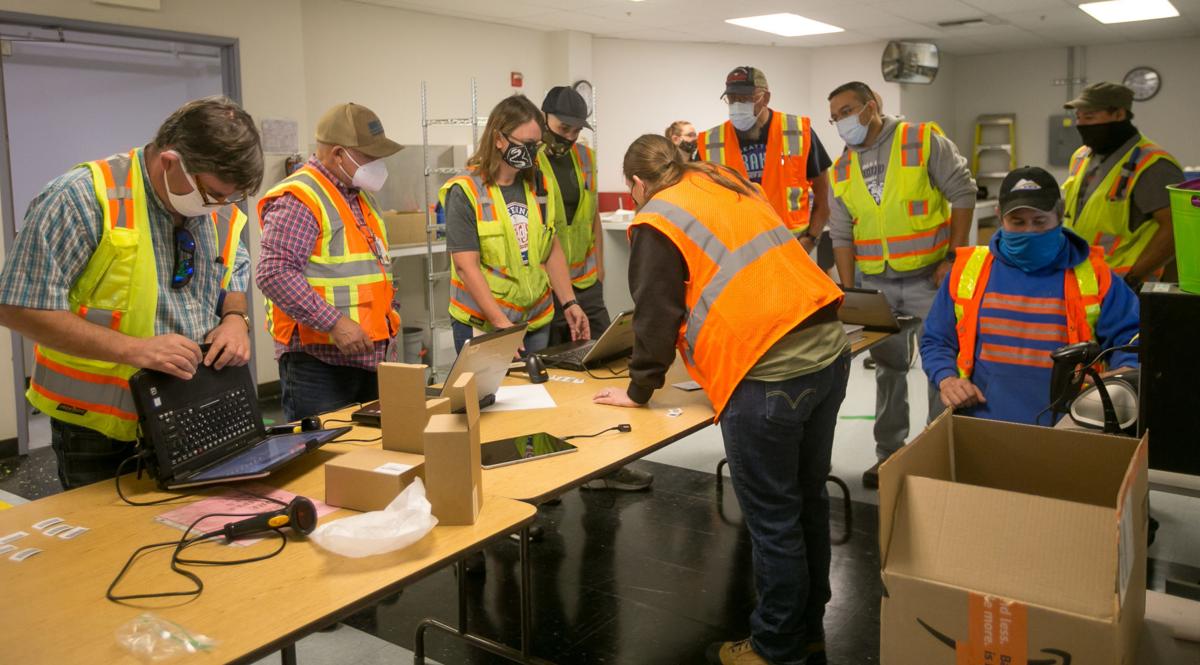 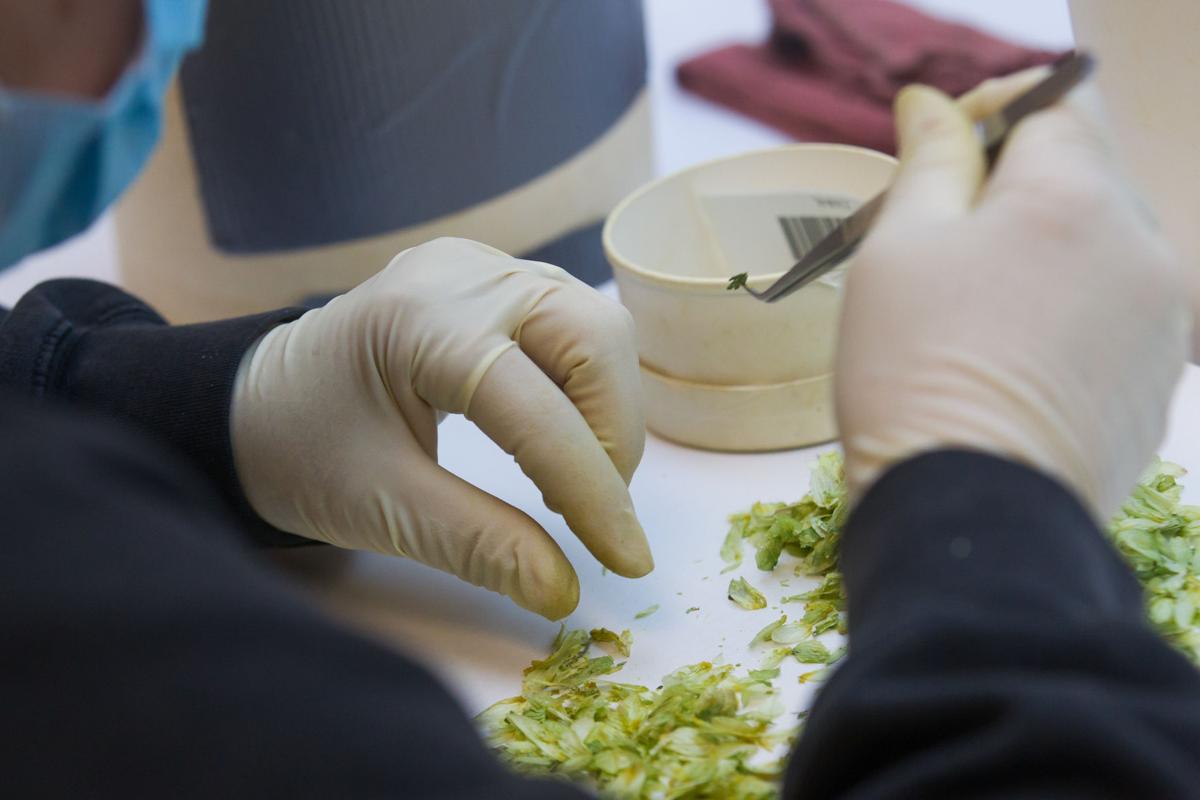 Debbie Helgert, a grader with the Washington State Department of Agriculture, sorts out leaves, stems, and seeds from hops flowers Thursday, Sept. 2, 2021, in Yakima, Wash. 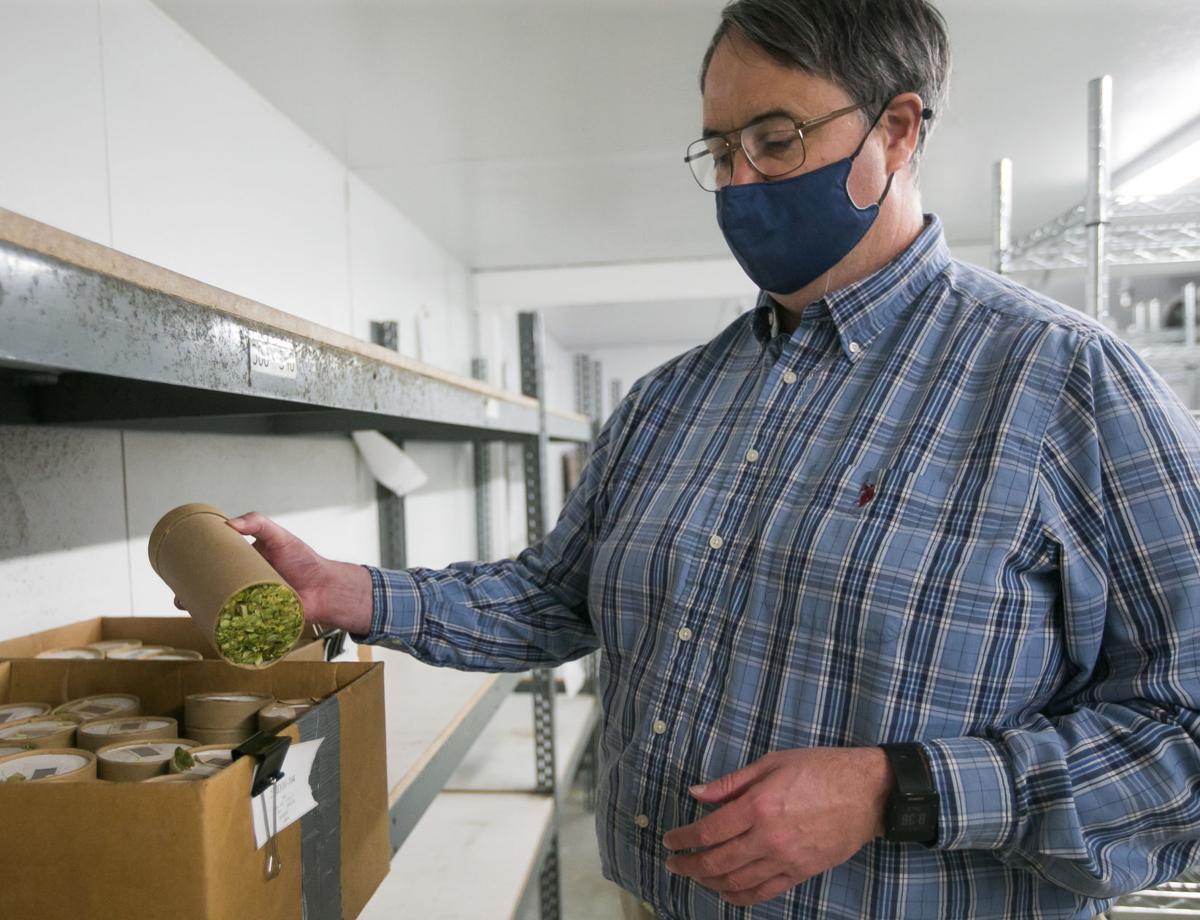 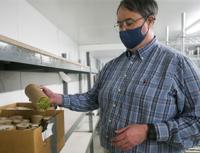 Debbie Helgert, a grader with the Washington State Department of Agriculture, sorts out leaves, stems, and seeds from hops flowers Thursday, Sept. 2, 2021, in Yakima, Wash.

Hop harvest is underway at Black Star Ranch in Moxee, with bine-packed trucks pulling into the Bell Road processing plant on a steady basis.

Black Star started with its Cluster variety, which as hops go isn’t quite as bitter as those prized by many craft brewers. Harvest of the more intense and highly sought Citra variety won’t begin for another couple weeks, said Ben St. Mary, a Black Star Ranch partner and hops operation manager. His family has grown hops and apples for more than 80 years and has 300 acres in apples and around 850 acres in hops.

Having been raised in the business and working in it for 20 years, St. Mary has seen many harvests, and this one looks positive so far. It began a little late, but by only a few days.

The short delay in ripening could be due to the unusually warm nights that came with record-breaking high temperatures earlier this summer. Hops like heat, to a point, but need cooler nights to ripen. Growers worry that the extreme heat may have damaged some hops. Then again, there are hundreds of hop varieties and they react differently to unusually high temperatures.

Hops require a lot of sunlight, which has been obscured somewhat in recent weeks by smoke from the Schneider Springs Fire about 18 miles northwest of Naches.

St. Mary is cautiously optimistic about the harvest, which is underway at farms throughout the Yakima Valley and takes about a month. The Yakima Valley produces more than 70% of the U.S. hops and 25% of the world’s hops.

While growers hope for the best, they also know the vagaries of agriculture business can defy the most informed predictions — and that’s in so-called “normal” times. The COVID-19 pandemic has impacted multiple aspects of agriculture, just as it has everything else.

St. Mary has enough workers for the hops harvest but that could change if COVID-19 cases continue to rise, or if workers quit as a labor shortage continues. If workers quit, it could be challenging for growers to replace them. It’s like walking a tightrope.

And though he has enough workers for hops for now, “Where we’re struggling is the apple side,” St. Mary said. “We’re going to lose some fruit because nobody wants to pick it. Labor is a little scary.”

Jaki Brophy, communications director of the Yakima-based Hop Growers of America trade organization, hasn’t heard a lot of concern from growers about labor staffing levels this harvest. Labor can be a challenge every year regardless of COVID-19, but the pandemic has impacted business owners in all areas, she said.

“Everybody’s having a hard time with labor, whether it’s Costco or a store at the mall or a farm. We’re not immune to that,” Brophy said. “But I will say that the hop growers are used to dealing with adverse conditions, whatever it is, and are great problem-solvers.”

The Washington State Department of Agriculture gets samples from every sale lot of hops in Washington state to assess the purity, along with some brought here from nearby states, and hires more than 40 people to work about six weeks from August to October. It’s a busy job, full-time and seven days a week, with overtime.

“We’ve done about everything we can to advertise it. We’ve had half the people at our orientation,” said Mike Firman, program manager of the chemical and hop laboratory in Yakima. “The labor market is just so difficult.”

As a result, they’ve had to pull fruit and vegetable inspectors into the mix. Several were training on the computer system Thursday.

Samplers to go to farms and warehouses to collect samples of the local hops and bring them back to the lab where hops are graded for seed, leaf and stem content, and analyzed for their brewing value. Brewers want high-quality hop cones, which are the female flowers that contain the flavorful and bitter compounds that give different beers their distinctive flavors and aromas.

When grading is complete, growers get a seed, leaf and stem certificate that allows them to export their hops worldwide. They do everything they can to eliminate all seeds, leaves and stems in the process that takes bines from fields to trucks. Cones are dried in massive kilns and pressed into 200-pound bales.

It’s been slow so far, Firman said. On Thursday, the lab had about 20 to 30 lots to process, which was about half the pace, he said. “Usually by Labor Day we’re very busy,” he said.

Their work usually ends in mid-October. But “if season drags out we’ll probably be (done) in the end of October,” Firman said.

Growers could see bigger harvests from record hop acreage, which was highlighted in the June 10 report from the National Agricultural Statistics Service, which is part of the U.S. Department of Agriculture. NASS forecast a record 60,735 acres, a 4% increase over last year’s 58,641, which was the previous record.

“The acreage is the highest it’s ever been” for the Pacific Northwest, Brophy said, which includes Idaho, Oregon and Washington. Those states grow almost all the country’s hops, with Washington state hops primarily grown in the Yakima Valley.

But if that translates to record yields remains to be seen. When the NASS report came out in June, experts predicted the potential for a below-average crop in yield despite the record acreage.

It’s early in harvest, though, and that depends on multiple factors, Brophy said. While all plants have a basic set of needs, each variety has its own quirks.

“We had a cold spring. For some people the heat actually helped things catch up a little bit,” Brophy said. “For some the heat was a little hot and yields will be down a little bit from an ideal yield, but there’s not a blanket response.

“Overall, we’re looking at about an average crop, maybe a little bit under average,” she said. “I wouldn’t say we’re not worried about it. It has affected things a bit, but it’s not dire.”

It is with quite a bit of legitimate boasting that Yakima County considers itself the hops capital of the world.