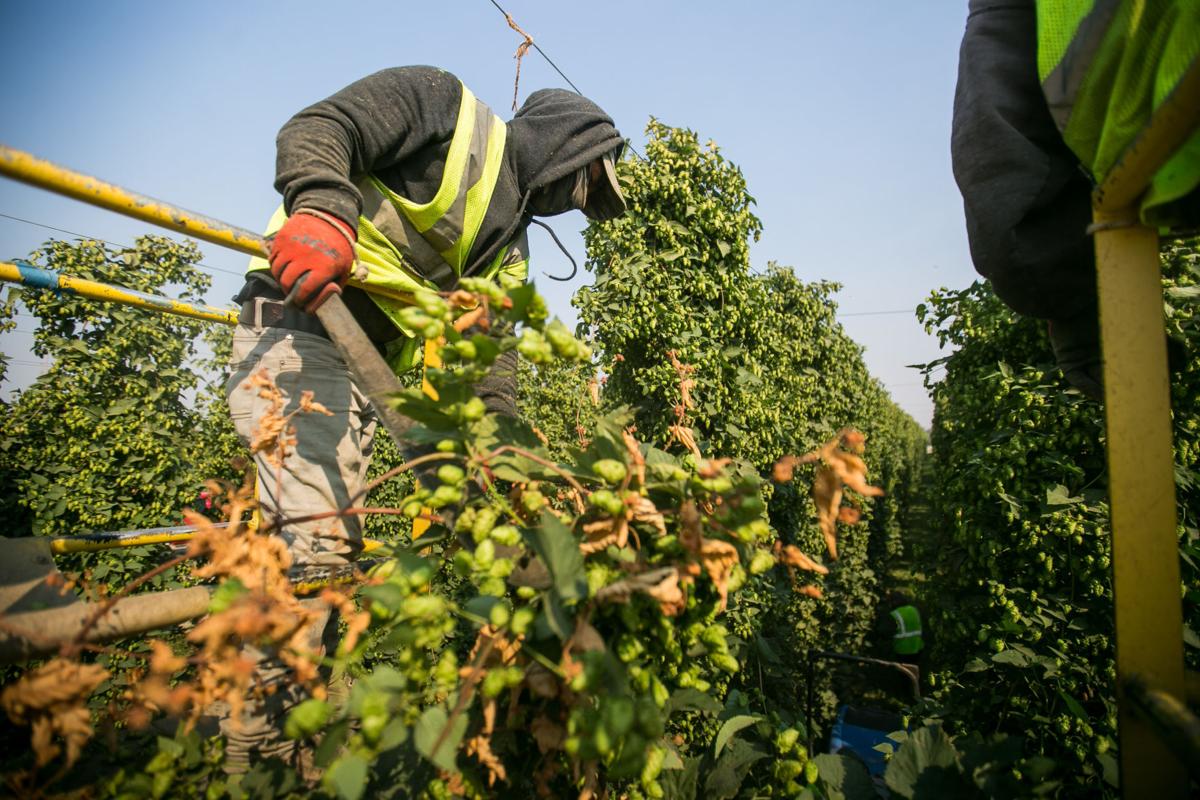 Juan Morales wears a face covering as he uses a machete to harvest hop bines Friday, Sept. 4, 2020, at Carpenter Ranches in Granger, Wash. 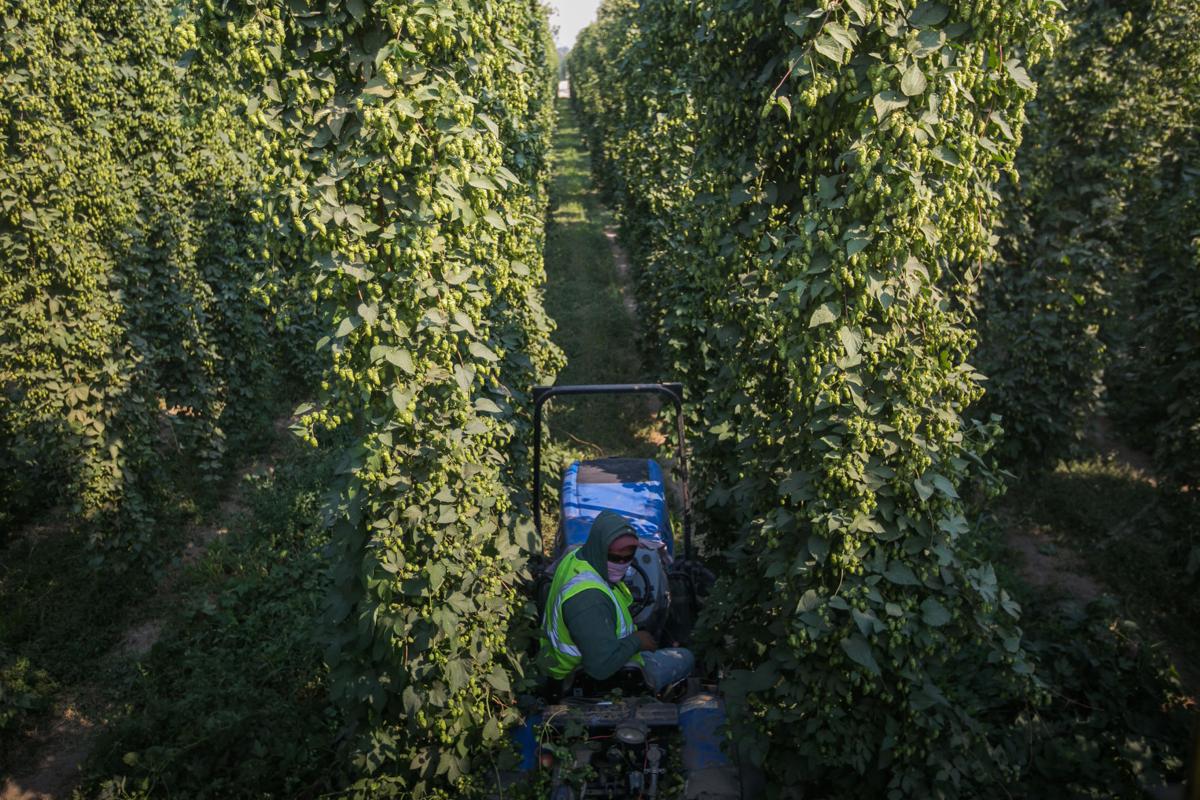 Ivan Garcia wears a face covering as he drives a combine harvester Friday, Sept. 4, 2020, at Carpenter Ranches in Granger, Wash. 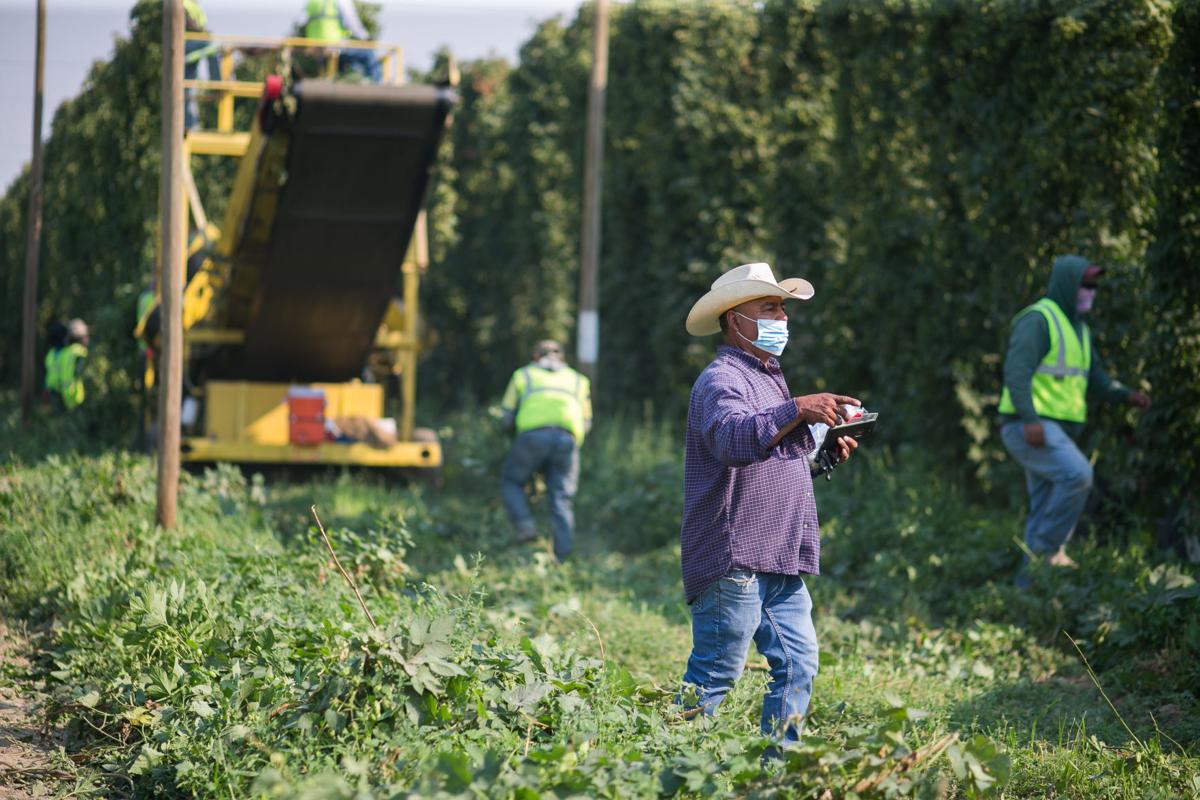 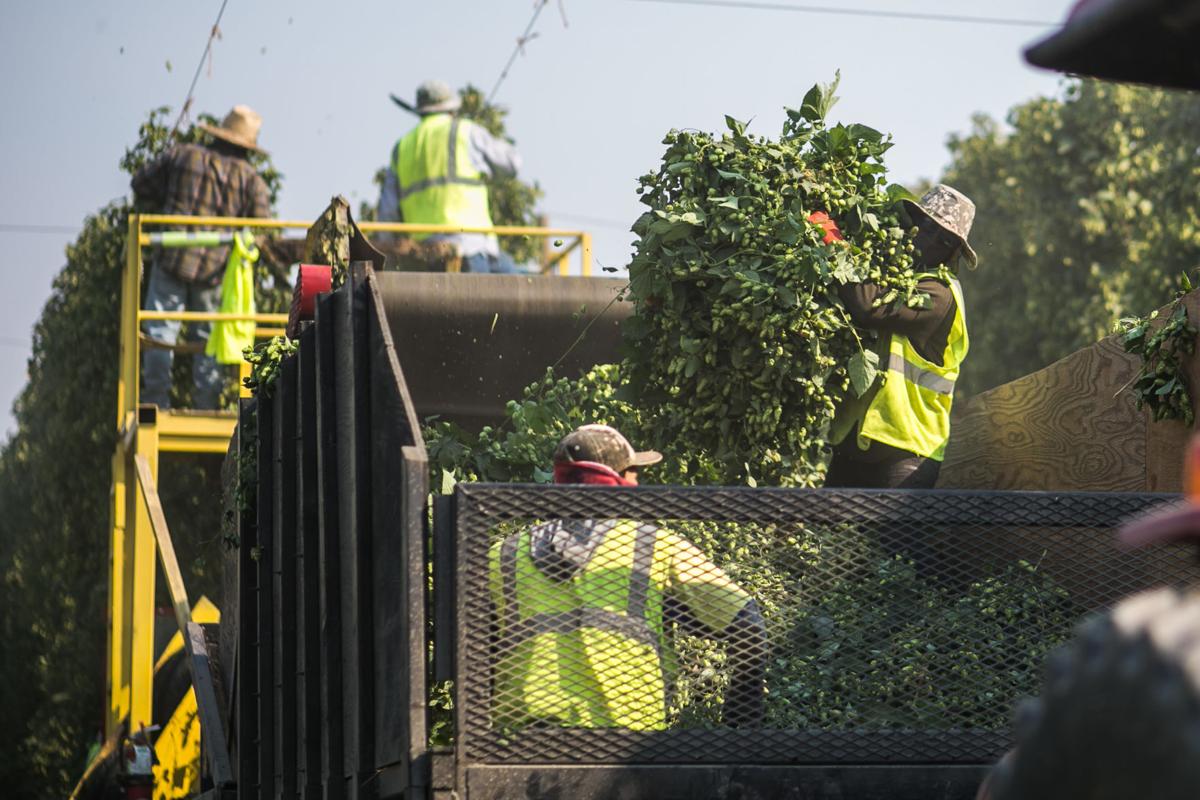 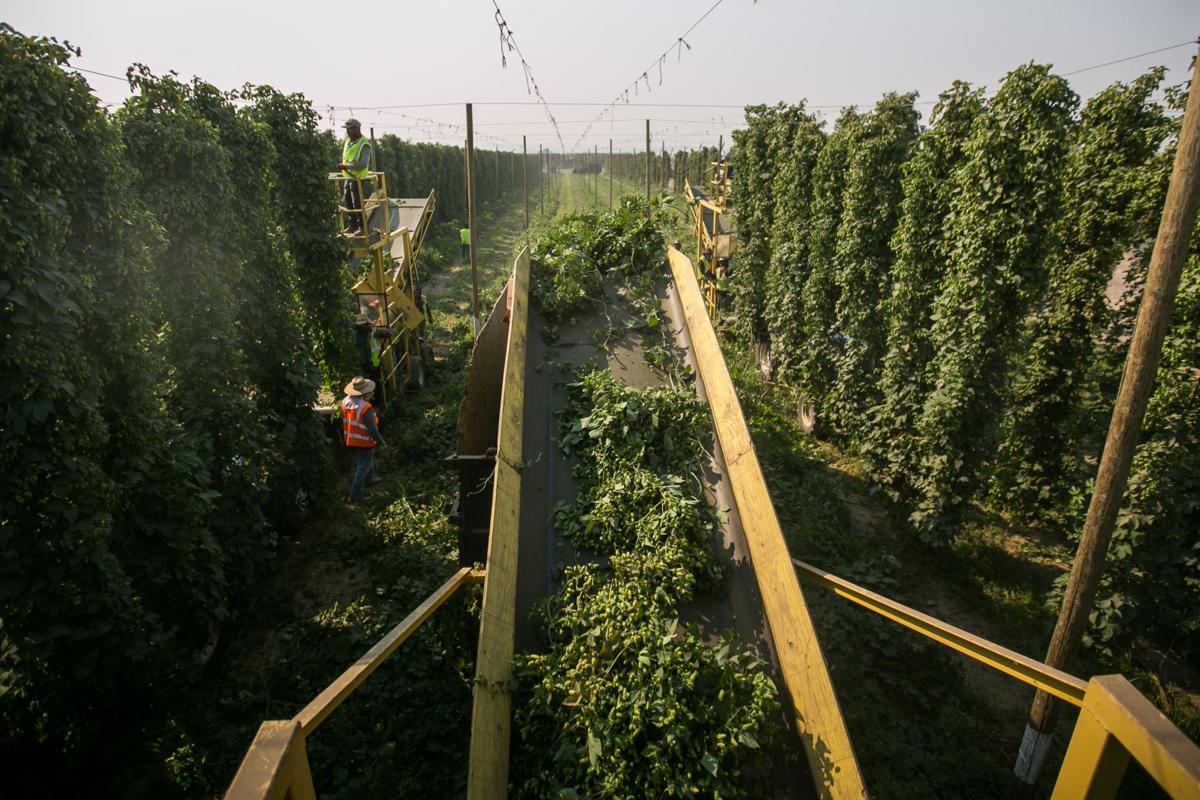 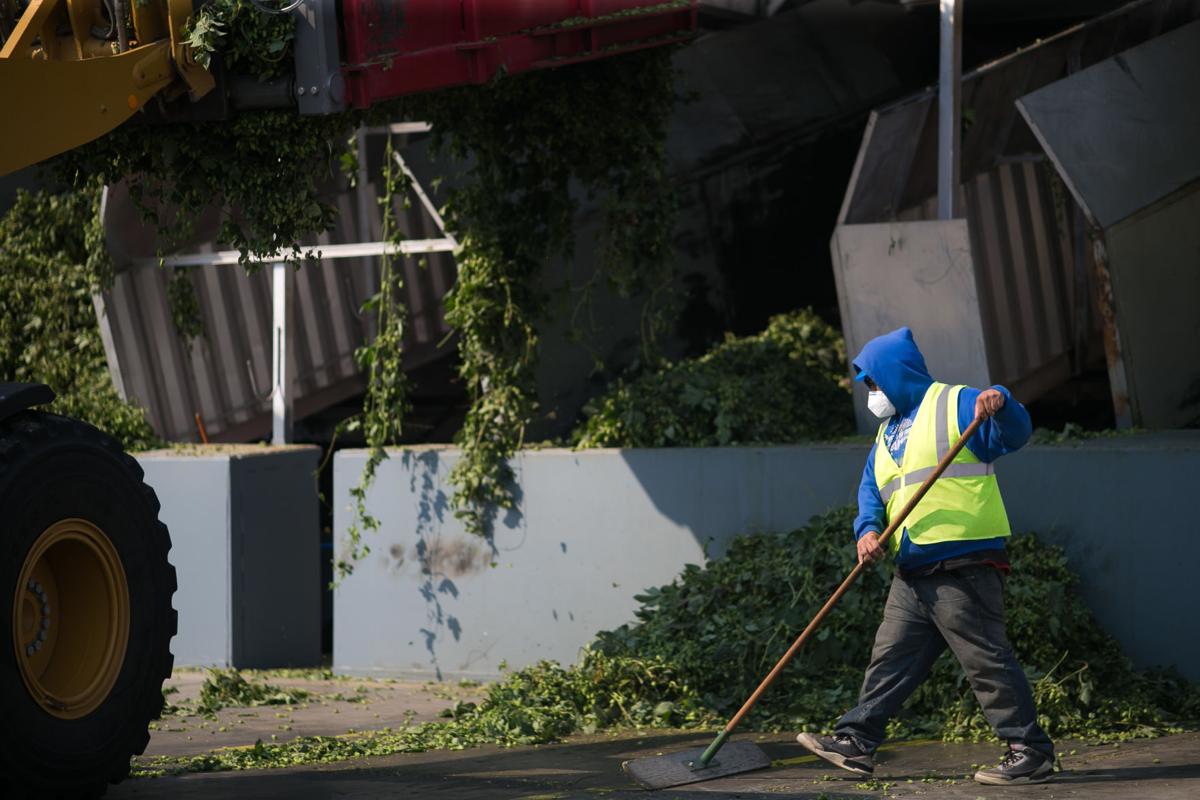 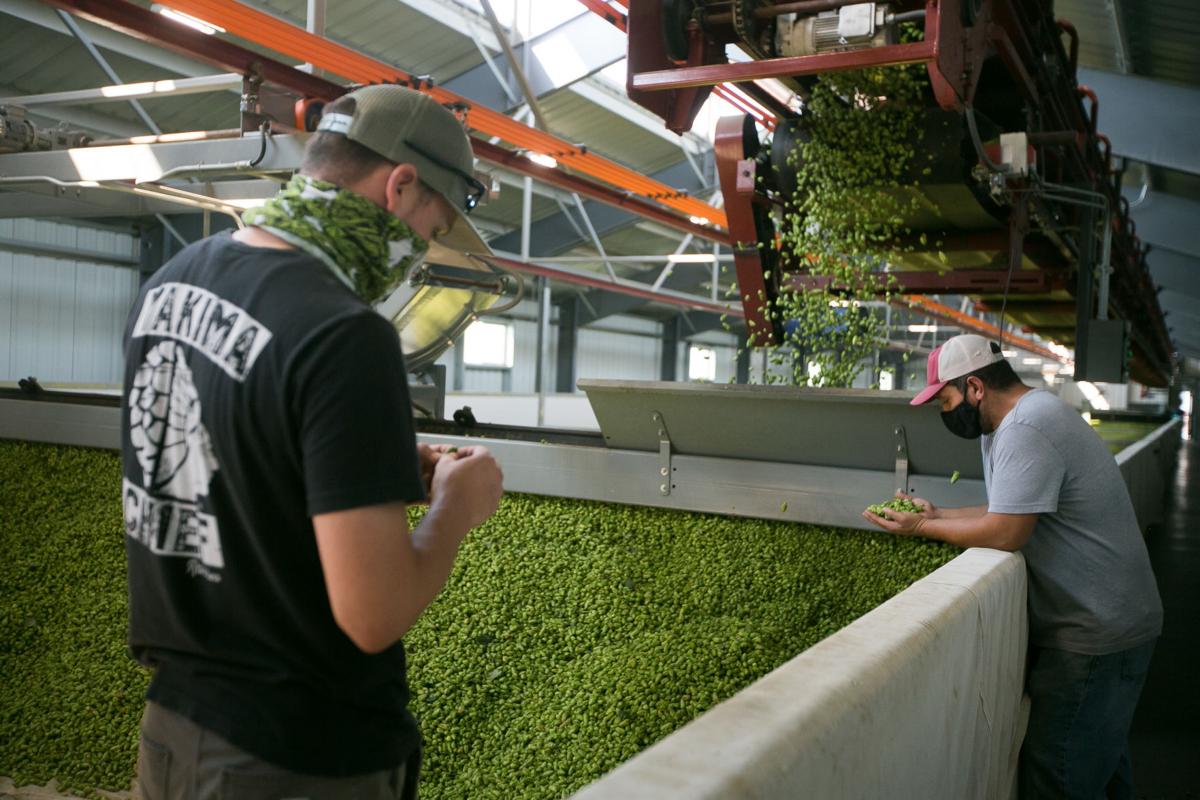 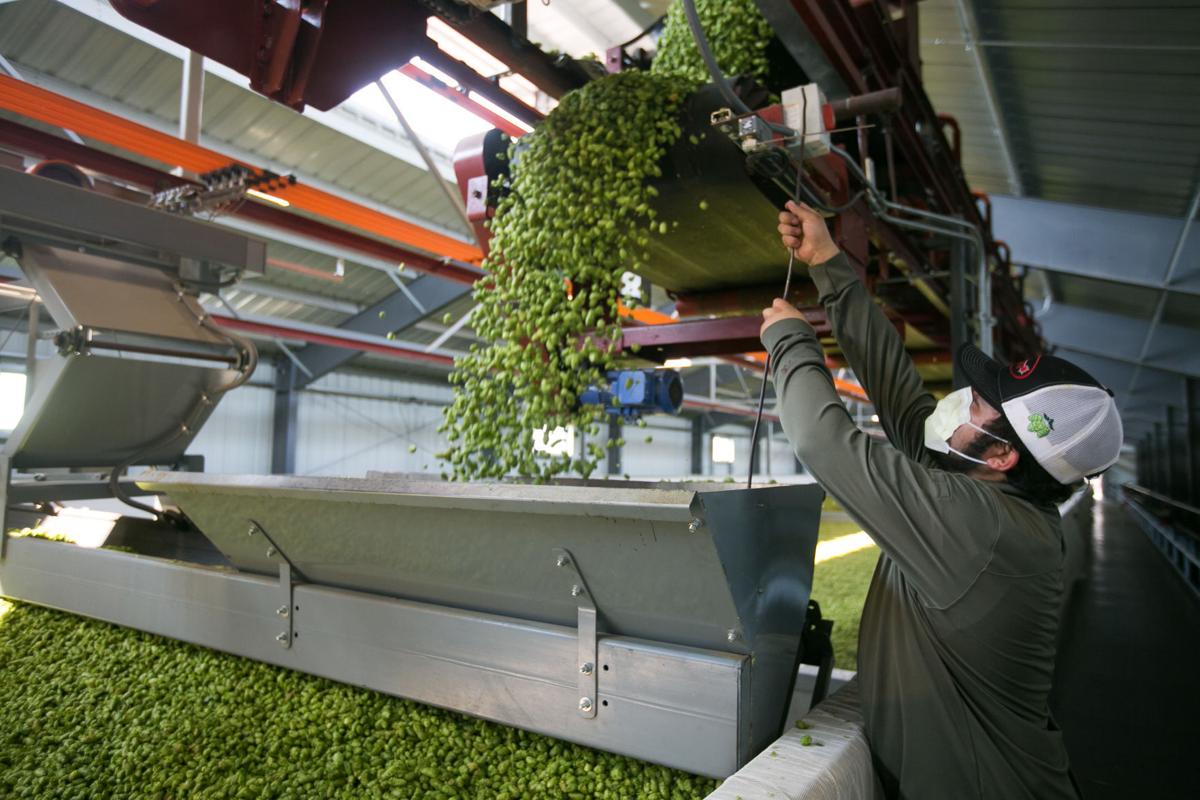 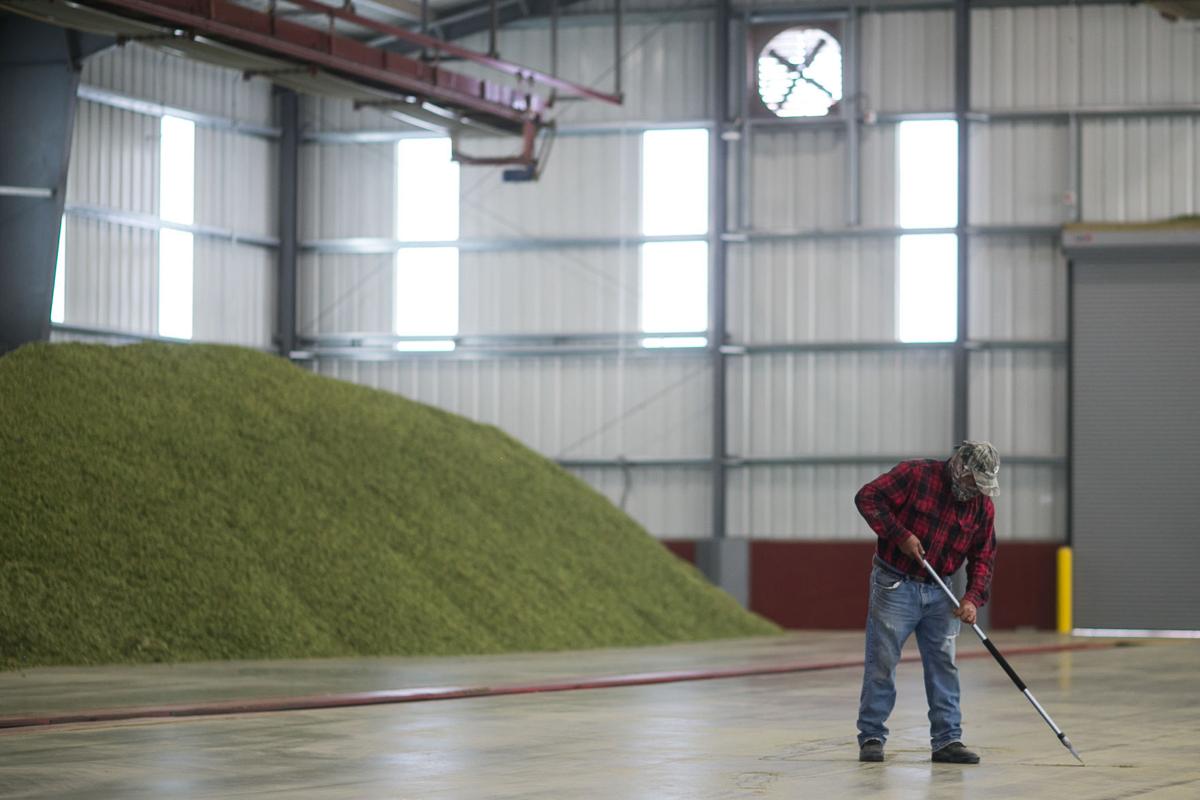 Juan Morales wears a face covering as he uses a machete to harvest hop bines Friday, Sept. 4, 2020, at Carpenter Ranches in Granger, Wash.

Ivan Garcia wears a face covering as he drives a combine harvester Friday, Sept. 4, 2020, at Carpenter Ranches in Granger, Wash.

Even before COVID-19 officially arrived in the Yakima Valley, officials at Yakima Chief Hops, a grower-owned hop processor and supplier, anticipated the pandemic would impact their brewery customers worldwide.

In February, the Yakima company’s grower members reduced their hop acreage, something that hasn’t been done in some time given the strong demand from craft breweries.

A month later, restaurants and taprooms were forced to shut down or drastically reduce operations nationwide under stay-at-home orders. As a result, breweries weren’t going to make as much beer or need as many hops.

“We felt that was the responsible decision for our growers and our breweries,” said Bryan Pierce, vice president of North American sales for Yakima Chief Hops. “No one benefits if there are too many hops.”

Plenty of hops will be harvested in Yakima Valley hop fields in the coming weeks, however.

The U.S. Department of Agriculture estimates that U.S. growers had a record 59,174 hop acres as of the end of June, making it possible the 2020 crop could be bigger than the 2019 harvest, which totaled a record 112 million pounds of hops. About 72% of this year’s estimated acreage, or 42,343 acres, is in the Yakima Valley.

“For both Washington and the U.S. overall, it appears we will have higher production numbers,” said Jaki Brophy, communications director of the Hop Growers of America, a Yakima-based trade organization.

While some growers, such as the grower owners at Yakima Chief Hops, were able to reduce acreage, other growers planted much earlier, likely before any significant awareness of COVID-19, Brophy said.

“Each farm has different timing,” she said.

Just as with other agricultural commodities, hop growers have had to implement safety measures, such as physical distancing, sanitation and mask-wearing. Hop Growers of America has been updating a resource page on its website. Among the resources is a safety plan template devised by a manager at Roy Farms, a Moxee hop grower.

“Everyone’s trying to stay up to date the best they can and constantly looking for more information on COVID-19,” Brophy said. “We’ve been updating (the resource page) quite a bit.”

Patrick Smith of BT Loftus Ranches near Moxee was concerned when he saw COVID-19 cases rising locally in mid-June.

By the time BT Loftus Ranches started harvesting in late August in Granger — and in the Moxee area last week — virus cases were much lower, a relief. But Smith said he knows it’s important to remain diligent in implementing safety measures.

Smith said the farm has about 250 workers, a mix of local and H-2A guest workers. He characterized the available workforce as “barely sufficient” to harvest this year’s crop, which is expected to be smaller than last year’s. BT Loftus Ranches is a grower-member of Yakima Chief Hops.

Any outbreak would create “massive challenges,” Smith said. “We can’t declare victory, move on and let our guard down. There’s always a possibility of a second wave of infection. If it happened during harvest, that would be devastating to the labor force.”

Typically, breweries work with hop growers or brokers to secure hops through contracts settled years in advance. The contracts, which vary from customer to customer, have deadlines for payment and shipment. Usually, those deadlines fall around harvest, which typically starts in the Yakima Valley in early September and lasts for several weeks.

By reducing the hop acreage and the overall hop yield, Yakima Chief Hops was able to build some flexibility for the 2020 crop, Pierce said. In general, deadlines have been pushed back by several months to allow enough time for breweries to use up hops from last year’s crop.

“We’ve been able to create a lot of flexibility for customers, allow some breathing room,” Pierce said.

Hop harvest is also a time for brewers and others in the beer industry to visit the Yakima Valley, watch the harvest and start making decisions about future hop contracts, a process known as hop selection.

Not surprisingly, breweries had to forgo this year’s trip to the Yakima Valley because of the pandemic.

Yakima Chief Hops decided to bring the harvest experience online this year. The company is offering nearly 70 different live and taped sessions, free of charge, on its website throughout this month. Along with sessions on hop varieties, home brewing and hop field tours, there are also sessions to highlight the different hop regions in Idaho and Oregon, as well as profiles on different aspects of Yakima Valley culture, such as a review of taco stands.

Pierce said he hopes to not only bring the experience for established customers, but also to those who don’t have the means to send staff to the Valley.

The hop selection process is virtual, as well. The company also scaled up its web-based application where breweries could get more information about different hops and make selections. Yakima Chief Hops also mailed hops to breweries and scheduled a video session with sales staff. During the call, brewers can talk to the sales staff as they’re rubbing and smelling the hops.

“I think it’s a big opportunity to keep that sense of normalcy,” he said.

For Smith of BT Loftus Ranches, not having brewers and others in the beer industry visit will still be a loss, especially for the local economy.

“If you talk to most hotels and restaurants, September is one of the biggest months,” he said. “That’s not going to happen this year. It’s very unfortunate.”

He’ll also miss making connections with brewers, not just as customers, but also as friends. During these visits, they discuss what the breweries are making and what their customers like to drink. It often provides valuable information for planning future crops.

“Without that interaction, we may not get the same feedback and guidance,” he said. “There’s a bit of a lost opportunity, but we’ll make do.”