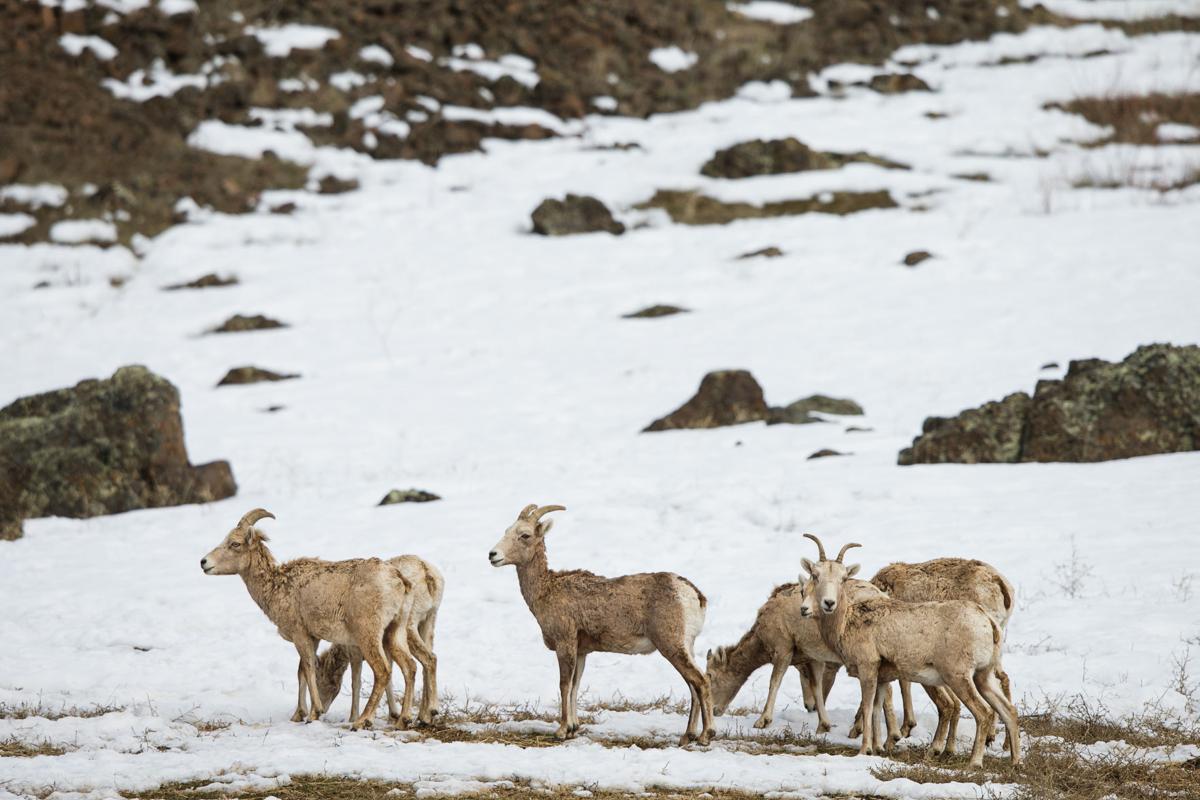 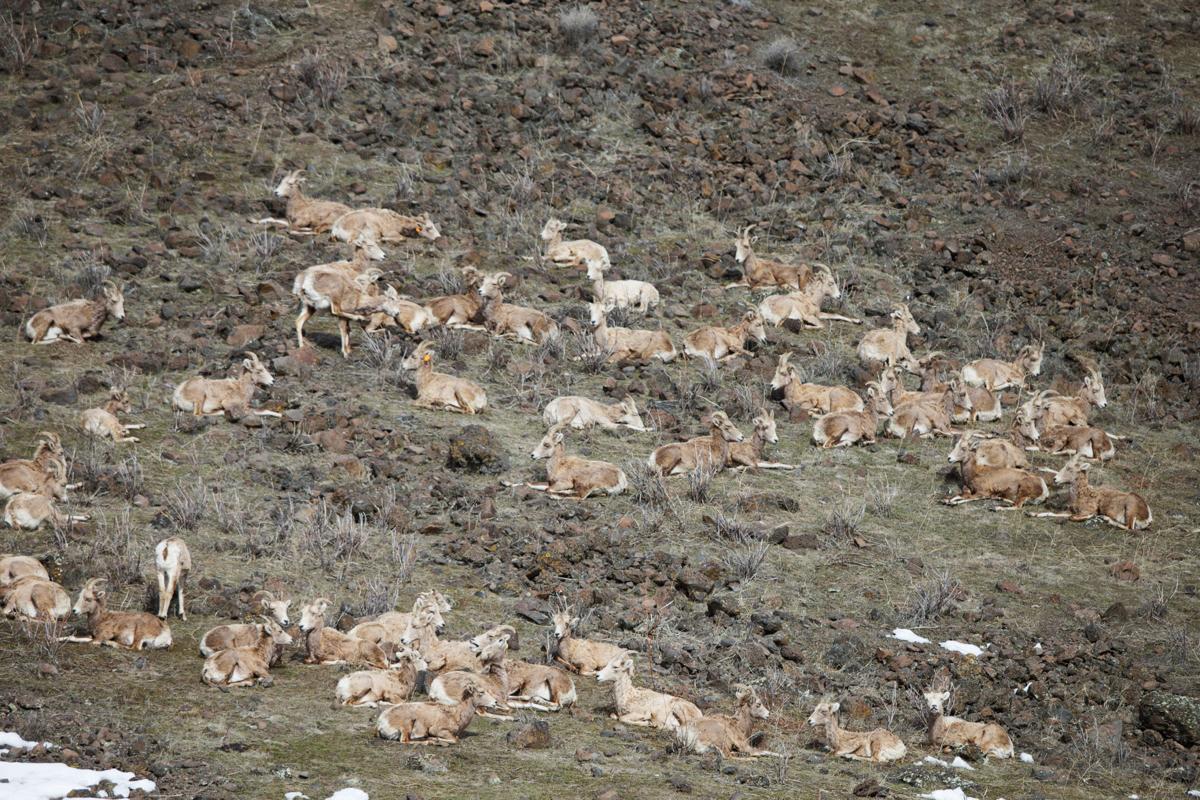 Dozens of bighorn sheep gather at the base of a hill near a Washington Department of Fish and Wildlife feeding station on Old Naches Road near Naches, Wash., Tuesday, Feb. 28, 2017. Wildlife management officials expect low death rates among elk, deer and sheep due to winter conditions. (SHAWN GUST/Yakima Herald-Republic)

Dozens of bighorn sheep gather at the base of a hill near a Washington Department of Fish and Wildlife feeding station on Old Naches Road near Naches, Wash., Tuesday, Feb. 28, 2017. Wildlife management officials expect low death rates among elk, deer and sheep due to winter conditions. (SHAWN GUST/Yakima Herald-Republic)

In recent years, some elk took advantage of mild winters and survived just fine at higher elevations rather than relying on state-operated feeding stations at lower elevations, such as the one west of Naches.

But as sustained cold temperatures dragged on this year, many of the plants the elk depend upon remained inaccessible below a thick layer of ice, forcing more of the animals down to the feeding operations.

The harsh winter has brought a few reports of deaths among the elk, deer and bighorn sheep, but just how widespread remains unclear, said state Department of Fish and Wildlife biologist Jeff Bernatowicz.

“Last year, the vast majority of mortality was in March, well after the snow had melted,” Bernatowicz wrote in an email. “The full impact of winter won’t be known until April.”

Snow has been heavier than usual, and the colder temperatures — on average 7 to 11 degrees below normal — have allowed it to last longer and at deeper depths. The National Weather Service reports 32 inches has fallen on Yakima Airport so far this winter, the most since 33 inches fell in 2003. White Pass has already reached 333 inches this season. More is expected this weekend.

St. Hillier said most biologists expect to see significant mortality this winter among deer and elk, adding that starvation isn’t the only threat made worse by the weather.

“That thick layer of ice allows predators like cougars and whatnot to run over it, but doesn’t hold up deer and elk,” St. Hillier said. “So they have to maneuver through more snow.”

This could be the second consecutive bad year for wildlife.

St. Hillier said last winter was one of the worst in recent years, because while temperatures were slightly above normal, there was plenty of snow. White Pass reported 343 inches of snow last winter, almost 200 more than the previous ski season.

Bernatowicz said those harsh conditions were a factor in the death of about 15 percent of adult does, which totaled 33 percent for the year. That’s an increase from the roughly 27 percent generally lost in low snow years.

“However, only one radio-collar doe has died from starvation to date (out of 100 animals),” Bernatowicz said. “Most radioed animals are adult does, so we don’t know fawn or buck mortality.”

He expects losses from March 2016 and this winter to lead to much lower harvests over the next few falls.

The picture for future elk hunting and possibilities for a significant decline in area populations are much less clear.

Surveys from last month showed that since February 2016, deaths in the Yakima herd caused a decline of about 2,500 elk, Bernatowicz said, so the population now stands at an estimated 8,300.

It’s “very doubtful” this winter can be blamed for a decline, he said.

Some of the decline was due to low numbers of births, as well as poor forage conditions due to drought in 2015, he said.

Illustrating the lack of food at higher elevations, about 70 percent of the Yakima herd came to the feeding sites this season, compared to 60 percent last season, he said.

Bighorn sheep on Cleman Mountain appear to be faring much better. The feeding site set a record with close to 275 sheep before significant snowfall. That’s well above the objective of 170 to 220 sheep for the herd, so Bernatowicz said approximately 30 were transported to the Quilomene Wildlife Area east of Ellensburg and Vulcan Mountain in Ferry County.

Despite the colder temperatures and more snow, Bernatowicz said fewer elk or deer have caused problems by wandering into orchards.

State wildlife agents say they’ve had a few reports of dogs tangling with deer or elk, but say it was significantly worse last year when the animals seemed more desperate to find hay.

“Conflicts start to taper off now if the weather gets better and the snow just starts to recede,” he said. “Night temperatures get better, days get warmer.”

National Weather Service said forecasts show March will continue to be wetter and colder through most of Eastern Washington. Snow in the Cascades lasts all summer in places, but temperatures in April and May are expected to return to around normal levels.

For those animals able to survive the winter, spring should bring welcome relief and plenty of available food. St. Hillier said the prolonged winter will give the shrubs the moisture they need to stay healthy, so the foraging should be excellent — as soon as it becomes available.

The case has been dismissed against the 77-year-old charged with illegally hunting Bullwinkle the Elk, the local celebrity in the Ellensburg area.