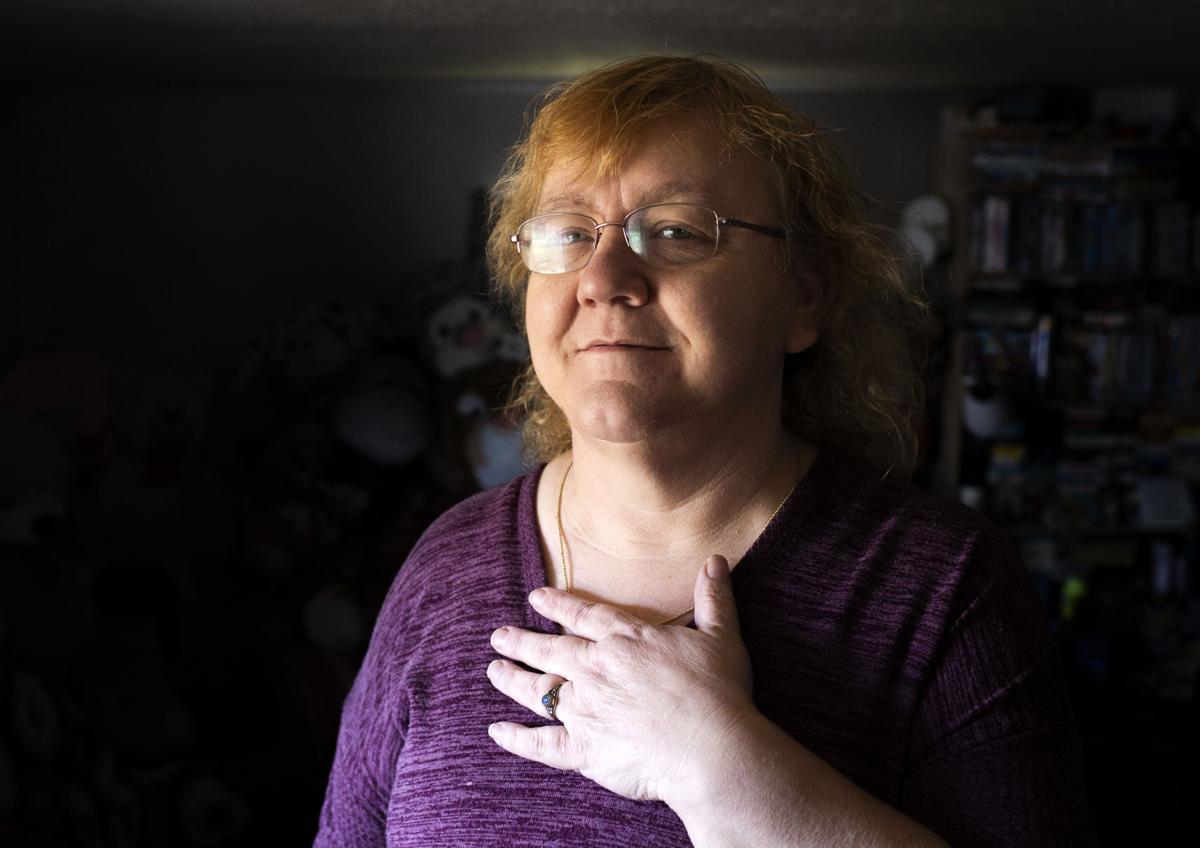 Dora Gunnoe poses for a portrait with her class ring from high school Thursday, April 8, 2021 in Brownstown, Wash. Gunnoe lost the ring about 30 years ago and it was returned to her in February. 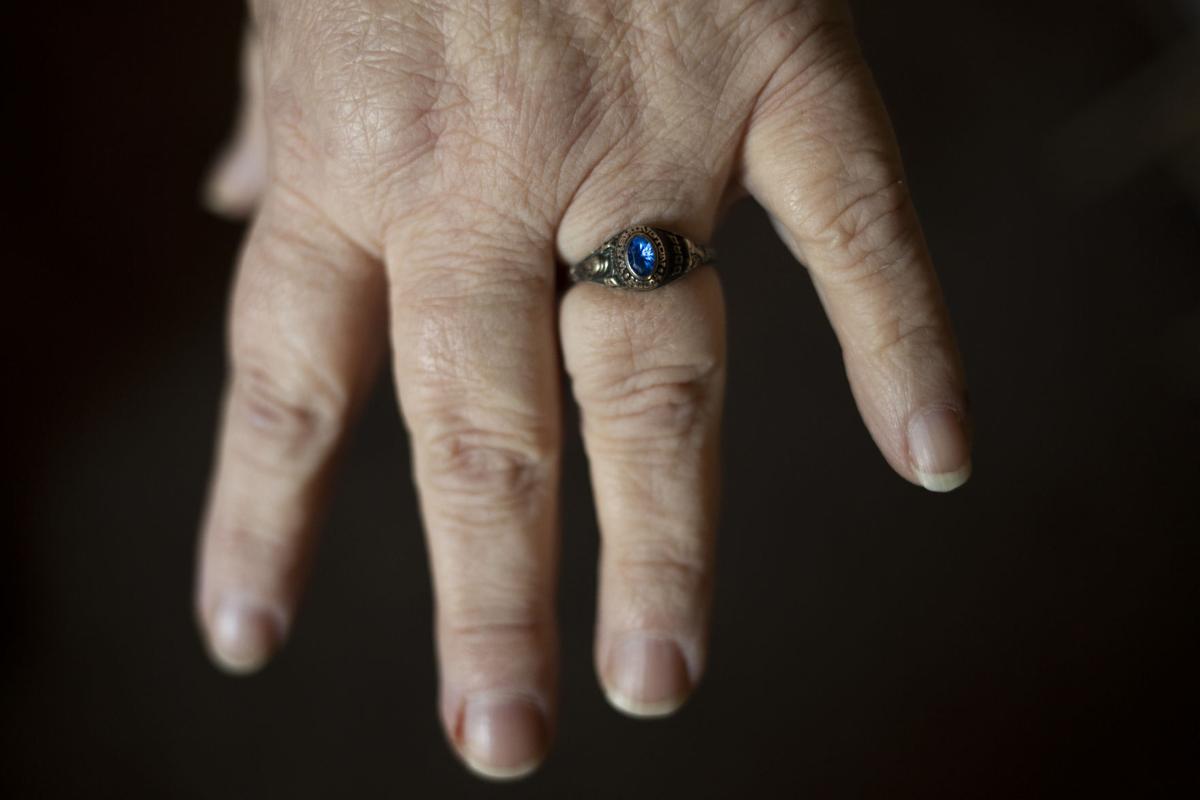 Dora Gunnoe shows her high school class ring that was returned to her in February after it was lost more than 30 years ago Thursday, April 8, 2021 in Harrah, Wash. 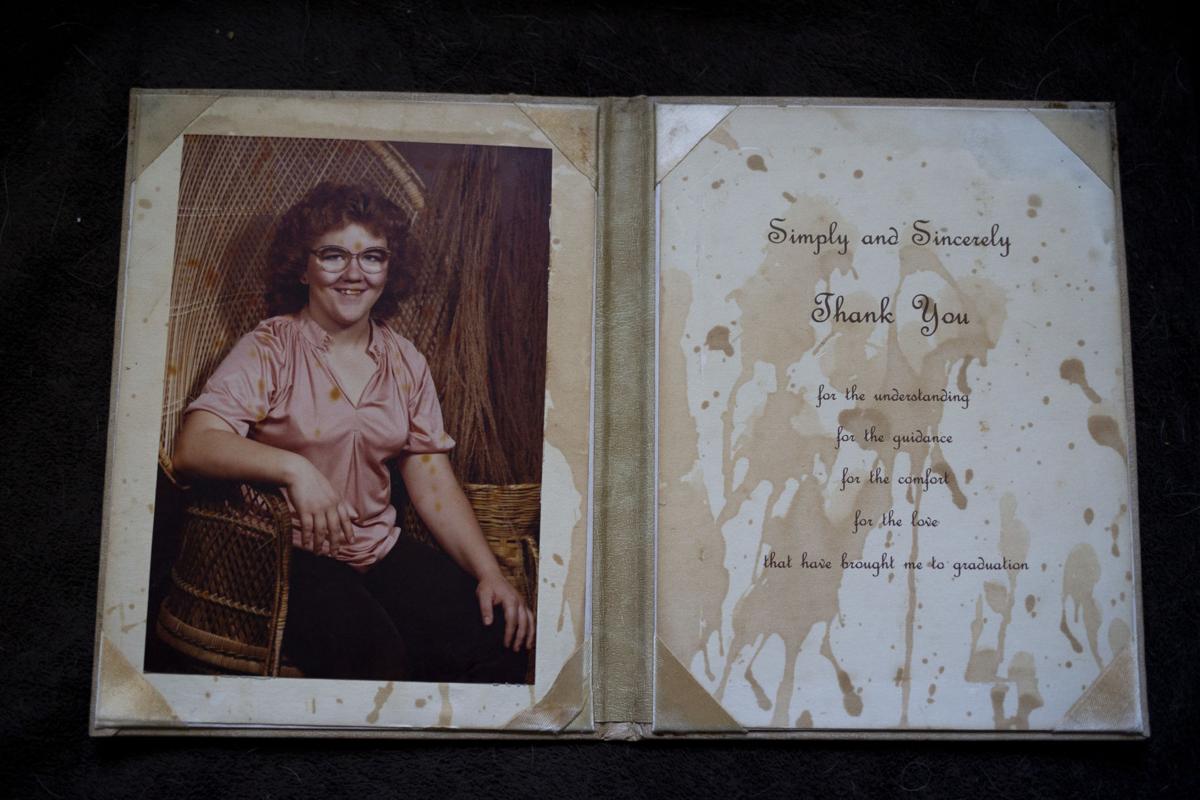 Dora Gunnoe poses for a portrait with her class ring from high school Thursday, April 8, 2021 in Brownstown, Wash. Gunnoe lost the ring about 30 years ago and it was returned to her in February.

Dora Gunnoe shows her high school class ring that was returned to her in February after it was lost more than 30 years ago Thursday, April 8, 2021 in Harrah, Wash.

Dora Gunnoe wears little jewelry other than a simple gold chain and a ring with her son’s birthstone. She recently added another ring that is just as precious.

When she was Dora Brotzman and a student at George Washington High School in Cedar Rapids, Iowa, there wasn’t much emphasis on earning her diploma. Neither of Gunnoe’s parents graduated from high school, nor did her older sister. A younger brother didn’t finish high school, either.

Gunnoe, who lives outside Harrah, graduated in 1985. Her parents couldn’t afford senior pictures or a class ring. Gunnoe was working then and paid for everything. The ring was especially important — a gift to herself for graduating.

“I finished. That’s what that ring represented,” she said. “To me it represents all that hard work I put in by staying in school.”

A few years after she graduated and left the Midwest for Washington, Gunnoe lost that class ring. She got it back in February and wears it on her left ring finger or on the chain. After all this time it’s a little snug, but she wants to keep it close.

“To get that back, it’s just so precious,” she said. “I love this ring so much.”

Looking back on the lengthy process that brought her ring back from the woman who kept it safe all these years, Gunnoe wanted to share one crucial piece of advice:

“It is so important when people get their class ring to put their name in it. That’s how they found me.”

The family Gunnoe married into is familiar to many in the Lower Yakima Valley. Her father-in-law, Ronald “Ron” Paul Gunnoe, died last summer of COVID-19. He was the longtime pastor of Central Valley Church of God in Wapato and was known for delivering food to needy families throughout the area. He also owned Century Automotive for more than 40 years.

A little more than three years ago, Dora Gunnoe lost her husband of 27 years, Robert Paul Gunnoe, in a traffic incident near Zillah, where they were living. Robert and their son, Willie, were walking south in the 1400 block of Roza Drive toward the Yakima Valley Highway when they were hit early on the evening of Jan. 8, 2018.

Robert was 51. Willie was taken to a local hospital with injuries not considered life-threatening. Deputies said the car’s driver didn’t see them because it was dark and fog was setting in. They had been heading to Bob’s broken-down truck, Dora Gunnoe said.

“Earlier that day, we had the best day doing errands,” said Gunnoe, who attends Harrah Grace Brethren Church. “I still focus on that today. That’s what helped get me through. I had my best date ever.

“You never get over something like that, but you can always get through it with God.”

Gunnoe, who also has been through cancer treatment and surgeries, has faced challenges much more profound than losing a high school ring. But she spent nearly $200 on it back in 1985. It meant so much to her, and she was upset when she couldn’t find it.

“I just worked my tail off and got extra hours to get it,” said Gunnoe, who was living with her mom when she graduated. She had taken a class to become a certified nursing assistant and worked at a nursing home through her senior year.

After moving to Bonney Lake to live with her dad and his wife for a while, Gunnoe moved again and married briefly before getting her own small apartment in Puyallup.

“I was dating a guy and thought he stole my ring. It was on the coffee table and after he left, the ring was gone,” Gunnoe said. “I tried to get hold of the guy. He wouldn’t answer and his mom kept saying, ‘He isn’t here. He isn’t here.’”

She moved into a bigger apartment in Puyallup before relocating to the Yakima Valley in early 1990.

Enter Connie Davis, who moved into Gunnoe’s first, smaller Puyallup apartment in 1991, a few years after Gunnoe moved out. When Davis decided to move, she cleaned every room carefully so she’d get her deposit back.

When she emptied the vacuum cleaner, out popped Gunnoe’s class ring with its deep blue stone, silver metal setting, “Dora” on the outside and faint lettering inside.

“I kept looking at it, kept thinking that is so pretty. It was in good condition, really nice, but I just couldn’t read the name in it,” Davis said. “I thought well, I’ll keep and maybe eventually I’ll find whoever it is.”

Davis left Puyallup for Phoenix and brought the ring with her. She had several people look at it over the years and none could make out the script inside. After each peek, she’d put it away for a while. Davis moved a few more times before settling in Maricopa, Ariz., and always took care with the ring, keeping it in a special box to protect it.

“I just kept it close to me. Whenever I packed anything, that I kept in my purse,” Davis said.

Help from familyLast year, Davis asked a niece’s tech-savvy and sharp-eyed husband, Brent Hon of Phoenix, for help. Could he make out the name and find this person?

“He says, ‘Oh yeah, that shouldn’t be too bad,’” she said. Davis was hopeful but unsure.

Davis was amazed when he determined the name. Then he headed online to find Dora Brotzman, first trying for high school connections. Hon later kept finding people who could be connected to Gunnoe, but not her. At some point he learned her married name and got in touch with Gunnoe’s brother-in-law’s ex-wife, Gunnoe said.

“She knew I was at the Zillah Fire Department,” said Gunnoe, who has been a volunteer firefighter for 14 years and moved to her home outside Harrah a few months ago. “He called the fire department and told the chief the story.”

Though the chief normally wouldn’t give out a volunteer’s number, Hon’s story changed his mind. He gave Hon her number and Hon called her earlier this year. She started asking questions about the ring and he sent her a photo.

“After a little more than a year, he found me,” Gunnoe said.

Hon quickly called Davis and let her and her sister, Pam Morlar, know he had found the ring’s owner. The sisters live together in Maricopa. They soon got their own chance to talk to Gunnoe.

“He called me right back when he finally found her. ... I like to have died,” Davis said. “(Gunnoe) said I’m going to be doing the happy dance. She was so happy and I was, too. There had to be a reason I kept it all that time.”

Gunnoe got her ring back soon after they spoke. It was at a jeweler for a few weeks for cleaning but was in good shape and didn’t require any repairs.

This Friday, Gunnoe will drive the bright yellow pickup she calls “Big Bird” to visit her dad in Iowa. He moved back there a few years ago. Her mother is gone and Gunnoe hasn’t seen her dad for some time. She looks forward to telling him all about the ring.

“It’s a story I have told so many people already. I’m telling everybody,” she said.

Not only did she get her ring back, Gunnoe gained new friends in the sisters, whom she calls her “grandmas.”

“We’ve got to keep in contact. We’ve emailed each other so many times already,” she said.