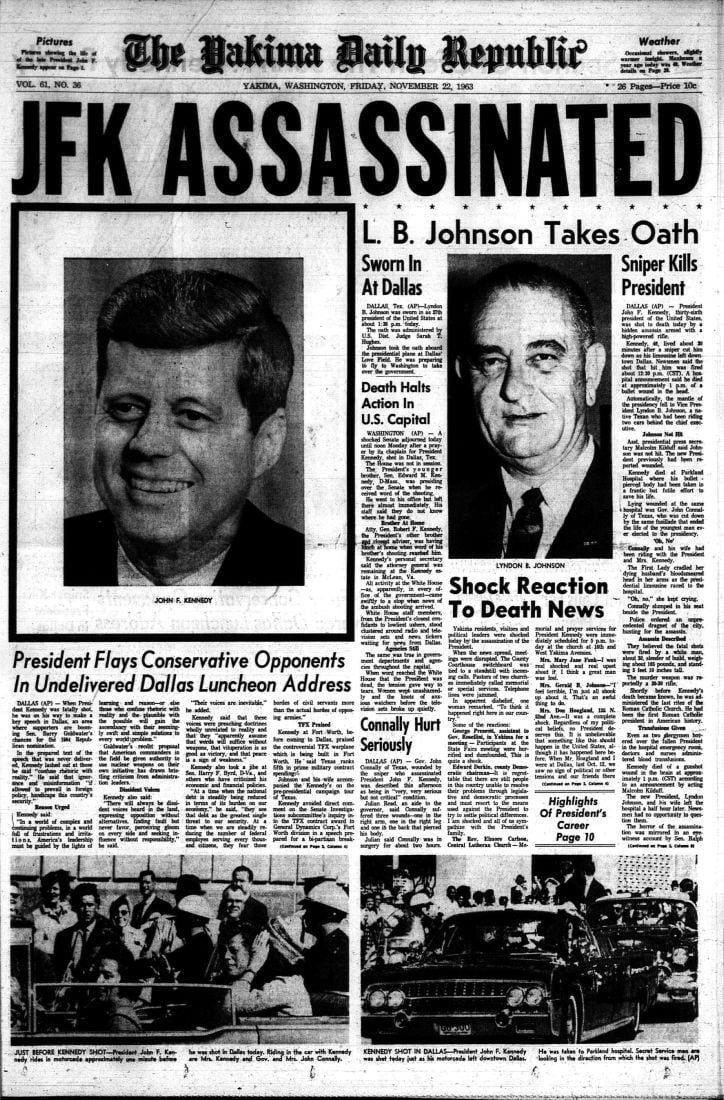 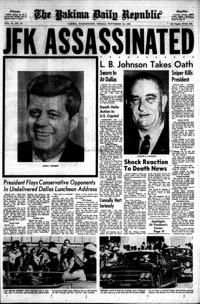 The front page of the Yakima Daily Republic from Nov. 22, 1963, announcing the assassination of John F. Kennedy. 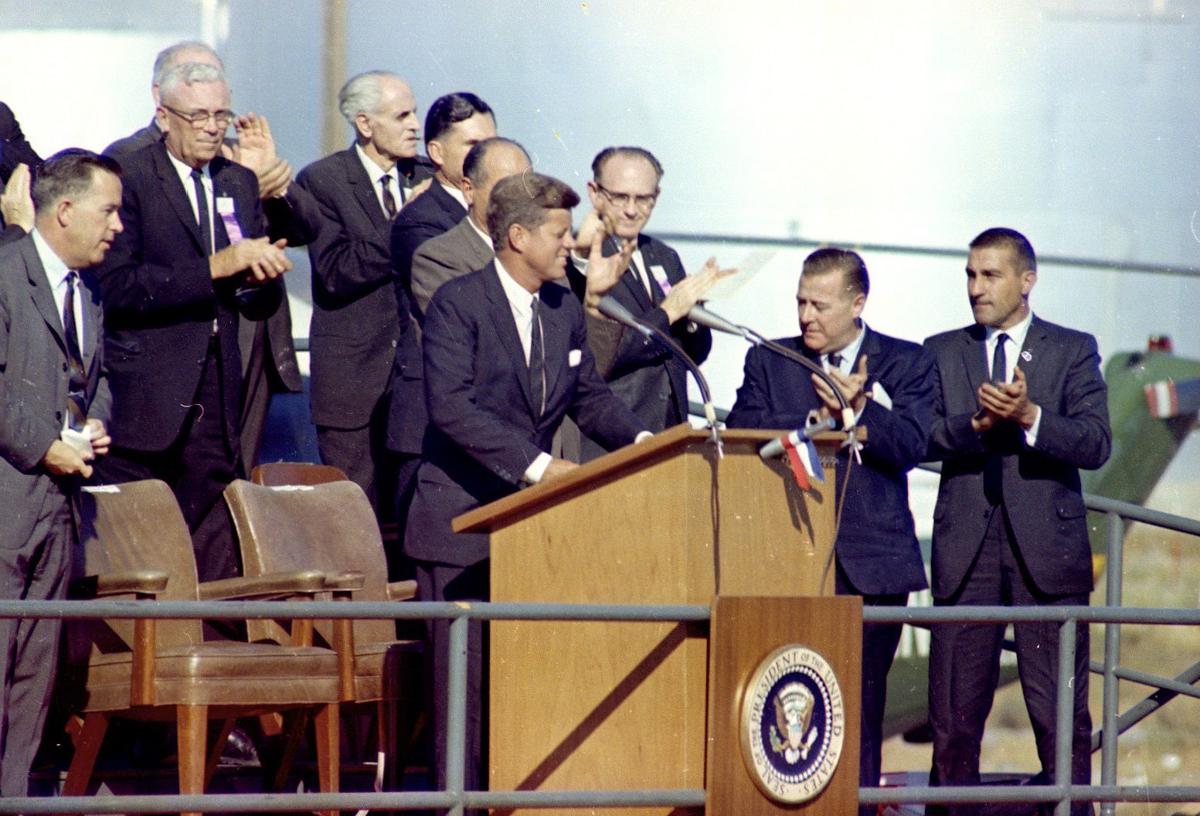 President John F. Kennedy is applauded during the groundbreaking ceremony for the N Reactor at the Hanford nuclear reservation on Sept. 26, 1963.

The front page of the Yakima Daily Republic from Nov. 22, 1963, announcing the assassination of John F. Kennedy.

President John F. Kennedy is applauded during the groundbreaking ceremony for the N Reactor at the Hanford nuclear reservation on Sept. 26, 1963.

The gunshots that rang out across Dealey Plaza in Dallas 58 years ago today reverberated across the country, including in Yakima.

Yakima County residents, like their counterparts around the country, were shocked by the news that President John F. Kennedy was assassinated while riding in a motorcade through Dallas. Businesses closed, flags were lowered and churches offered prayers on behalf of Kennedy’s family and the grieving nation.

At the time of his killing, Kennedy was laying the groundwork for a 1964 reelection campaign, visiting western states to drum up support. Weeks earlier, he was at the Hanford Nuclear Reservation for the groundbreaking of the N reactor.

In Dallas, Kennedy was to give a luncheon speech while also trying to unify Texas Democrats. Kennedy was pronounced dead around 11 a.m. Pacific Time. His successor, Lyndon B. Johnson, was sworn in aboard the presidential aircraft 90 minutes later, with Jacqueline Kennedy at his side, her dress stained with her husband’s blood.

As news of Kennedy’s death spread, Valley residents were stunned at the death of the young president.

Pacific Bell reported that phone lines in the area were inundated to the point where there were delays in people getting a dial tone, while the Yakima County Courthouse’s switchboard was overwhelmed.

Flags around the Valley were quickly lowered to half-staff in mourning for Kennedy; some people were seen openly weeping on the streets.

“I wonder how many people are thinking of (the Kennedys) as human beings? He had a wife, two children and a mother,” said the Rev. Riley R. Johnson, rector of St. Michael’s Episcopal Church. “They are all human beings. This is a human tragedy.”

At the Yakima Daily Republic and the Yakima Morning Herald, journalists scrambled to cover the story, from getting reaction from people on the street to putting together a photo retrospective on Kennedy’s life. The Republic, the evening paper, came out that afternoon with a front page featuring Kennedy’s photo with a mourning border around it, with the all-caps headline “JFK ASSASSINATED” across the top of the page.

An editorial in the Republic eulogized Kennedy as a man who fought for what he believed in, even if the paper’s editors disagreed with him at times.

“He deserved the adoration of a hero — not a bullet from an assassin,” the editorial said. “He fought as all Americans fight — to win.”

Yakima Mayor Jack Larson issued a proclamation declaring a day of mourning and urging residents to attend church services to pray for both Kennedy and Johnson.

That Sunday, churches put aside their Thanksgiving programs to provide solace in the wake of Kennedy’s death. Pastors reported that the number of people coming to church that day was comparable to Easter services.

Washington State Patrol troopers were out on alert, as State Patrol Chief Roy Betlach warned them to expect the unexpected, including the possibility of crashes caused by panicked people.

At the Yakima Firing Center — now the Yakima Training Center — 1,000 troops were assembled to hear the formal announcement of Kennedy’s death from Secretary of Defense Robert McNamara.

The 1963 Apple Cup game between the University of Washington and Washington State University was moved from Nov. 23 to Nov. 30 out of respect for the slain president.

Local businesses leaders urged businesses to close their doors to mourn Kennedy’s death. Packing houses on Yakima’s Fruit Row remained open the day of the funeral, but allowed workers who wanted to watch the services to take time off.

The next day, businesses and schools were closed as Kennedy’s funeral service was broadcast from Washington, D.C. Yakima Avenue, already decorated for Christmas, was quiet until noon, when the funeral service had concluded.

At the firing center, a 21-gun salute was fired in the morning to honor Kennedy, and that evening a 50-gun salute — one shot for each state — was fired.

At. St. Paul’s Cathedral, the Rev. John Ecker celebrated a requiem Mass for Kennedy on behalf of the Yakima Diocese, while other churches offered prayer services.

Kennedy’s assassin, Lee Harvey Oswald, would be arrested hours after Kennedy’s death, but not before he killed a Dallas police officer. Oswald never faced justice, as he was gunned down by nightclub owner Jack Ruby as he was being transferred from the police headquarters to the county jail, sparking wild conspiracy theories that continue to this day.

One relic of that day in Dallas is in Washington. The presidential aircraft that Johnson flew to Dallas is on display at the Museum of Flight in Seattle. The plane that Kennedy took to Dallas, and on which Johnson was sworn in before bringing Kennedy’s body back to Washington, is at the National Museum of the United States Air Force in Dayton, Ohio.