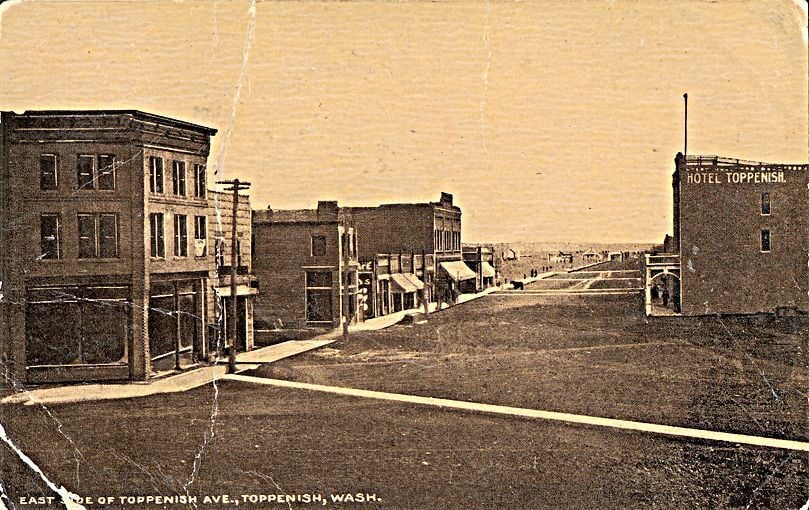 An undated photo shows a view of the east side of Toppenish Avenue in Toppenish. The city was incorporated in 1907. (Courtesy photo/Yakima Valley Museum) 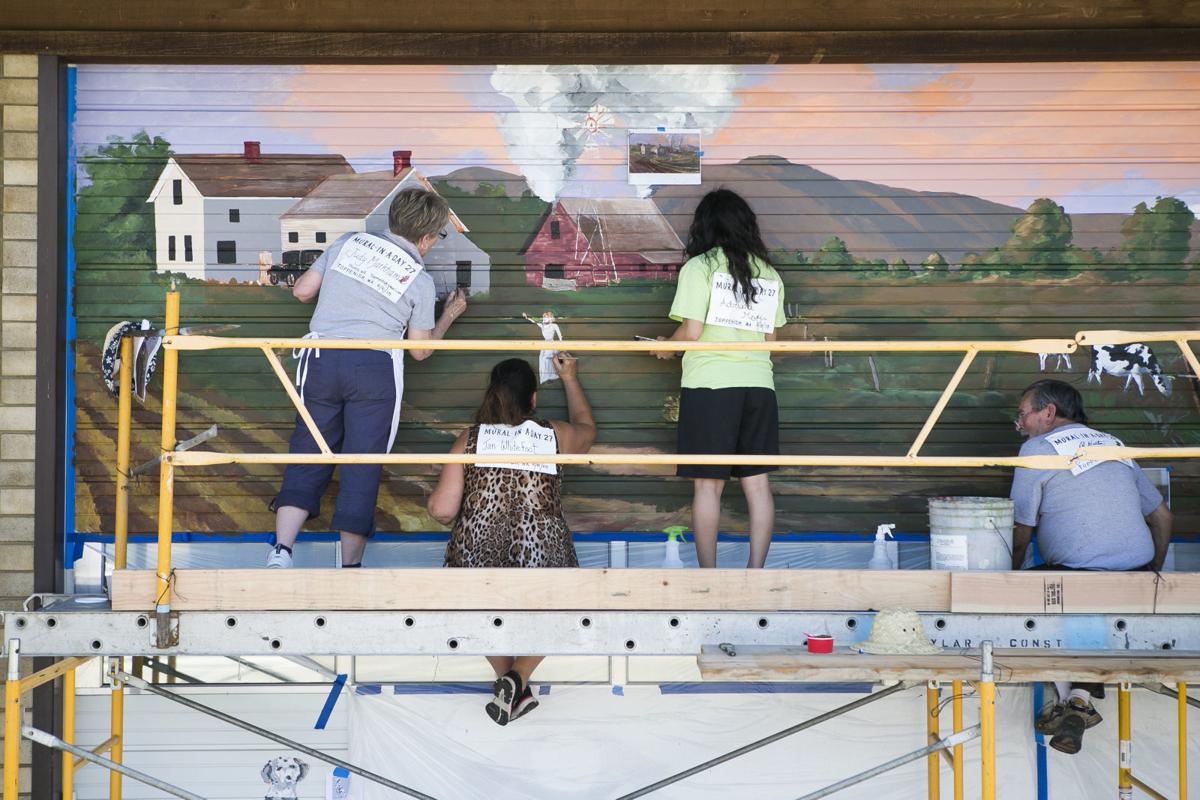 Scenes from the 26th annual Mural-In-A-Day in Toppenish, Wash., Saturday, June 6, 2015. Artist Don Brown's depiction of the city's fire department during the 1920s was painted on the large roll-up garage doors of the fire station in Pioneer Park. 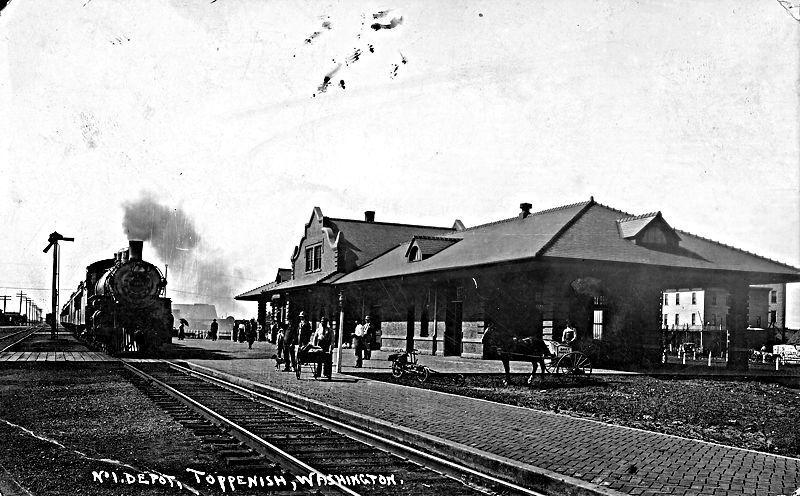 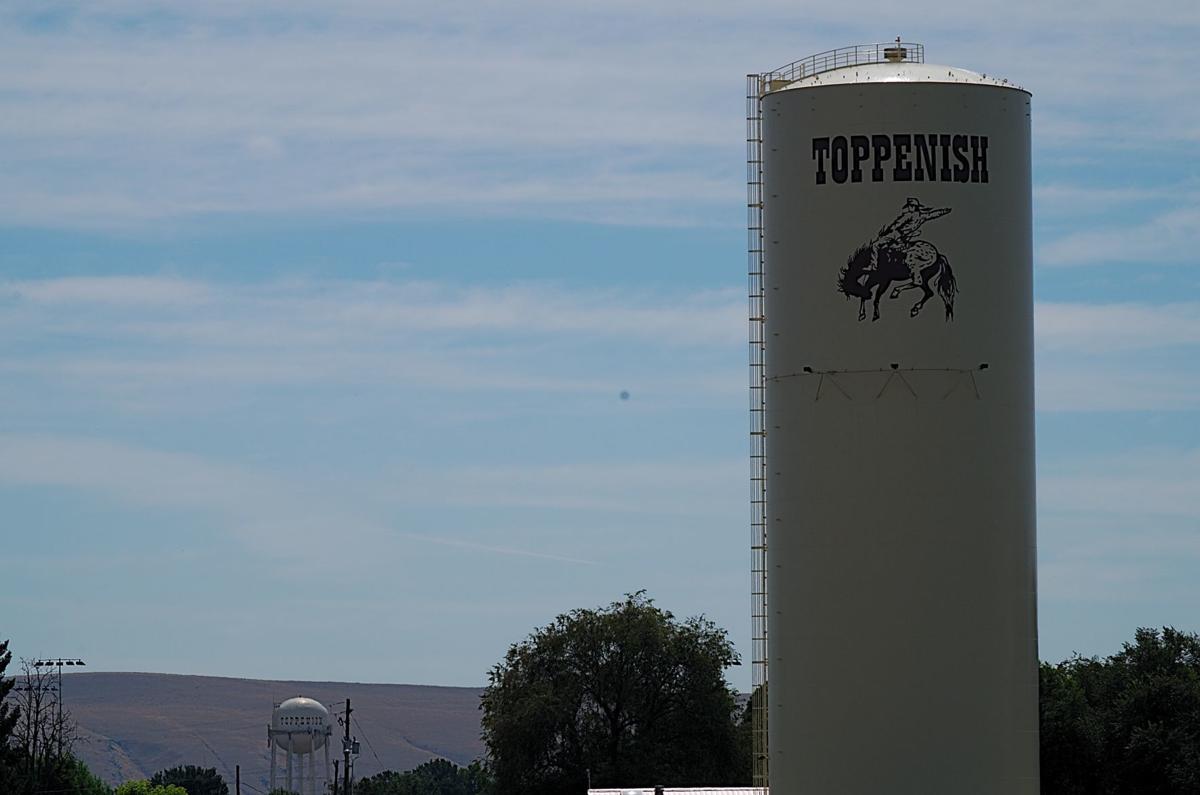 An undated photo shows a view of the east side of Toppenish Avenue in Toppenish. The city was incorporated in 1907. (Courtesy photo/Yakima Valley Museum)

Scenes from the 26th annual Mural-In-A-Day in Toppenish, Wash., Saturday, June 6, 2015. Artist Don Brown's depiction of the city's fire department during the 1920s was painted on the large roll-up garage doors of the fire station in Pioneer Park.

April 29 marks the 114th anniversary of Toppenish’s formal incorporation as a city, a move that spurred great hopes for the Lower Valley community.

But it wouldn’t have happened without the railroad and a Yakama woman with keen foresight for how the area would develop.

Like Yakima, Toppenish was selected as a site for a Northern Pacific Railway depot, which was built in 1884. The depot served as a place where ranchers could bring their livestock to be shipped to markets outside the Valley. The town grew as irrigation turned the area into productive farmland.

About the same time as the railroad’s arrival, the federal government announced that Yakama citizens would be eligible for land allotments of 40 to 160 acres on the reservation. Families could also claim land through “squatter’s rights” by occupying it.

Among those who did that was Nevada Lillie, a stagecoach driver, and his wife, Josephine, a Yakama citizen.

The Lillies initially staked out their claim about a mile east of the depot, where they built a store that doubled as the post office.

With Washington approaching statehood, the government announced that Yakamas would be awarded their allotments as soon as surveyors finished their work.

The Lillies moved to the west side of the depot, where Josephine received an 80-acre allotment on which they built another store/post office, as well as what some described as the grandest home in Toppenish between Division Street and South Toppenish Avenue.

They divorced in 1900, with Josephine Lillie moving to Portland to provide her children with a better education. But she hung on to her allotment, eventually becoming the first Yakama to gain full title to her land.

At the time, it was the only land that non-Yakamas could buy in Toppenish, which helped boost the population, and earned Josephine Lillie Parker the title of the “mother of Toppenish.”

Yakima County commissioners granted Toppenish’s petition to incorporate as a city on April 1, 1907, with an election scheduled for April 19. At the election, the vote was 100-1 in favor of incorporation, and Leonard Talbott was elected as the new city’s first mayor by 105-1.

County commissioners certified the election results April 22, and the results were filed with the Washington Secretary of State April 29, making it official.

Real estate companies did their best to whip up interest in the new city, predicting that it would become a major city in the Valley.

“Toppenish has the location, climate and soil,” a front-page advertisement in the Yakima Daily Republic on April 30, 1907, announced. “And Uncle Sam is going to supply the water.”

The city became home for the Yakama Indian Agency and is still the seat of the Yakama Nation’s government.

One of Toppenish’s major employers was the Utah & Idaho Sugar Co., which operated a plant in Toppenish refining sugar from sugar beets from 1936 through 1979. It provided consistent employment for agricultural workers, as the beets were processed in the fall after other crops were brought in.

The plant’s closure, due to cheap imported cane sugar hurting the market for beet sugar, caused a serious downturn in the city’s economy in the 1980s.

Toppenish is also famous for its murals, with a new mural typically created during the “Mural-In-A-Day” event in June.