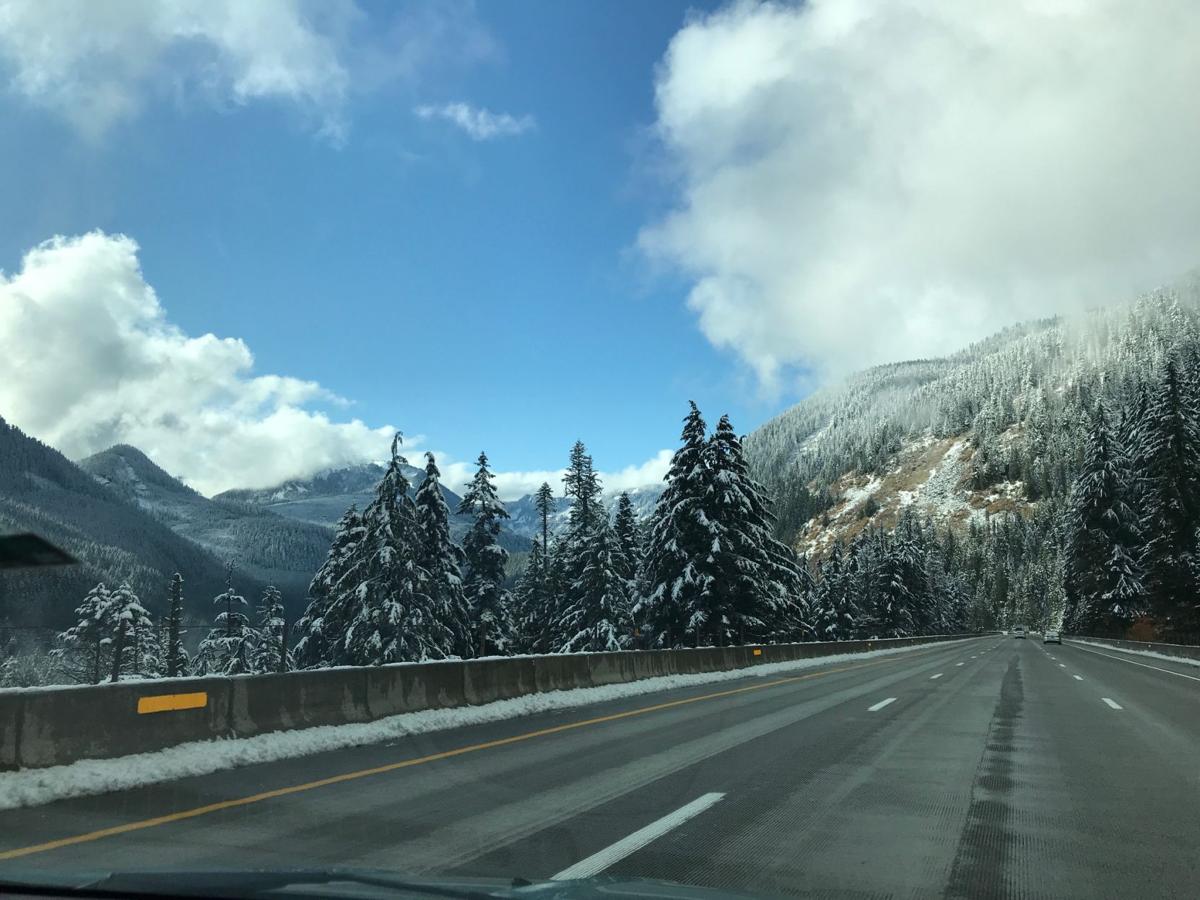 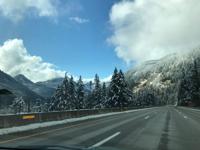 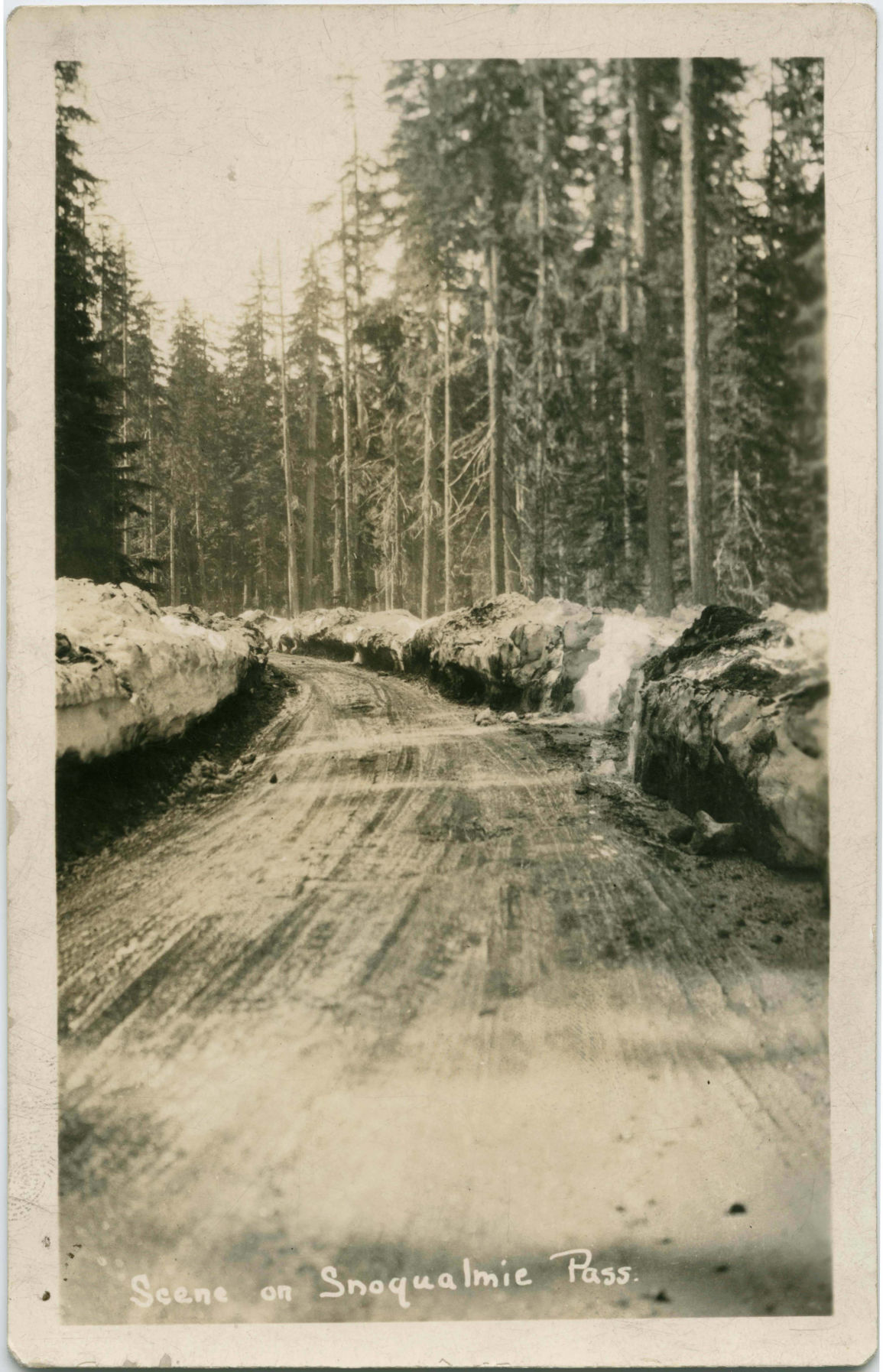 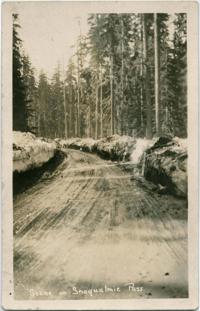 A photo from the early 1900s shows the road going over Snoqualmie Pass. In the 1880s, a group of Ellensburg businessmen built a toll road on the pass.

A photo from the early 1900s shows the road going over Snoqualmie Pass. In the 1880s, a group of Ellensburg businessmen built a toll road on the pass.

Most of the time we take it for granted that the quickest way to Seattle is over Snoqualmie Pass.

While that idea was recognized even before Washington achieved statehood, it wasn’t always easy going. But in the 1880s, three Ellensburg-area businessmen decided they would make a better road through the pass, as well as make some money from people taking advantage of the convenience.

For three years, the Seattle and Walla Walla Trail and Wagon Road Co. operated a toll road over the pass, only to have the Northern Pacific Railway provide an even better way to get to the west side of the state.

The Cascade Mountains were such a formidable barrier that it slowed the settlement of Eastern Washington. While settlements were established along the coast, notably at Fort Vancouver and Seattle, the interior of the state was mostly left to Native tribes, who had already established their own footpaths through the mountains.

The first settlers who came east followed the Columbia River, which provided a virtual expressway to the Pacific Coast. Some, such as trappers and Catholic missionaries, made their way into the Yakima Valley.

But people started realizing that crossing the mountains would be a shorter trip than having to go down the river and then head north toward Seattle.

Territorial Gov. Isaac Stevens directed Capt. George B. McClellan in 1853 to conduct a survey of a route through the Cascades to link Fort Walla Walla to Fort Steilacoom, specifically at Naches and Snoqualmie passes.

It was during this survey that McClellan, who would later go on to become an overly cautious Union army general in the Civil War, encountered the Yakama and their famed chief, Kamiakin, whom he assured — falsely, it would turn out — that he was only looking for road access through the area, not new settlements.

As for the passes, McClellan deemed both routes infeasible due to deep winter snow, although some records suggest that McClellan actually took a different, more difficult path through the Snoqualmie area than the one that would later be used.

In 1859, Seattle residents petitioned Congress to pay for a road across the mountains at Snoqualmie — which, being the lowest part of the Cascade Range in the state at nearly 3,000 feet above sea level, made it the logical place for a road.

The Civil War put those plans on hold, but that didn’t stop people from seeking to build a thoroughfare on their own. In 1865, a group from Seattle surveyed a route over the pass, and the following year spent $2,500 — $44,851.55 when adjusted for inflation — to make a rough road from what is now North Bend to the pass.

That year, a wagon train made the crossing using the incomplete road. The following the year, the Territorial Legislature provided $2,000 for a road going into the Yakima Valley.

Calling it a road, however, is probably being generous, as it was more of a glorified trail that could only handle small wagons and cattle drives, if the cattle walked two abreast most of the way. And funding repairs was a difficult matter, as the federal government showed no interest in the road, and a lottery to raise funds was deemed illegal and its organizer apparently absconded with the money.

Walter Bull, Henry Bryant and Nathan Preston, who were all involved in the cattle industry in what’s now Kittitas County, decided that a better road would allow them and other Eastern Washington business people to get products to the markets on the west side. On March 13, 1883, they incorporated the Seattle and Walla Walla Trail and Wagon Road Co.

The company was authorized to issue $100,000 in stock — $2.8 million in today’s currency — for the project. Among the early investors was John Shoudy, who with his wife, Mary Ellen, founded Ellensburg, and Howard C. Walters, who would help the project along by writing articles for papers around the state touting the project.

The company’s project involved overhauling the existing road. Workers widened the road to allow for more traffic, built bridges over creeks and put down “corduroy road” — sand-covered logs — in swampy parts of the pass.

This project cost about $150 per mile, although the corduroy sections were about $300 a mile.

With the road completed, Kittitas County commissioners granted Bull and his partners the right to collect tolls on the road, between Taneum Creek and the summit, in 1884. Tolls ranged from $1 for a horse and rider to $4 for a wagon pulled by four horses, while sheep and hogs could be driven along the road for 10 cents an animal.

It’s not known whether Bull and his investors ever broke even, let alone made a profit, as many travelers would jump off the road and go around the toll booths.

But the toll road’s days were numbered when the Northern Pacific Railroad extended its line into Kittitas County, right to the edge of the Cascades. At first, the trains had to make an arduous ascent over Stampede Pass on switchbacks until a tunnel was built that eliminated 800 vertical feet and many miles from train runs.

The toll booths came down in 1887, and for a time the road was deemed “lost” by some.

Eventually, as automobiles became more popular and available, newer and better roads were built over the pass, including Interstate 90, following closely along the original road.