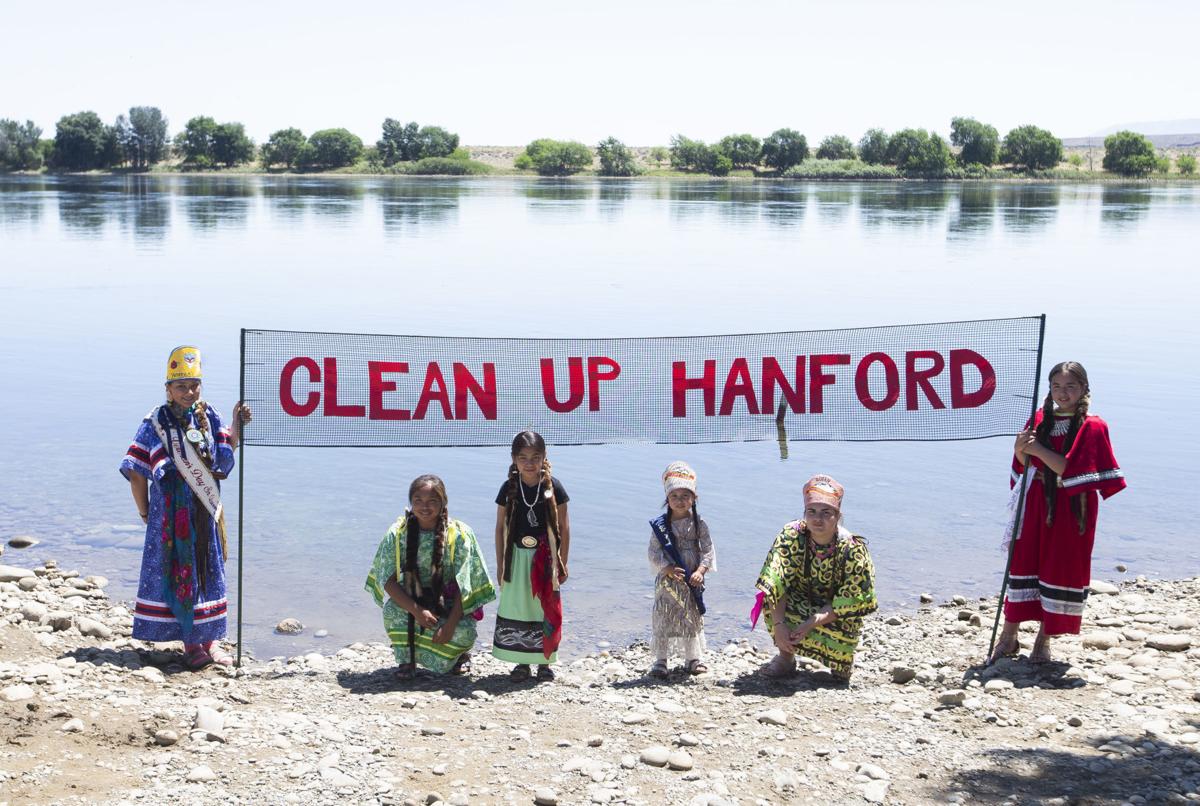 The Swan Dancers pose with a sign on the shore of the Columbia River before performing at the Hanford Journey on Friday at Hanford Reach. 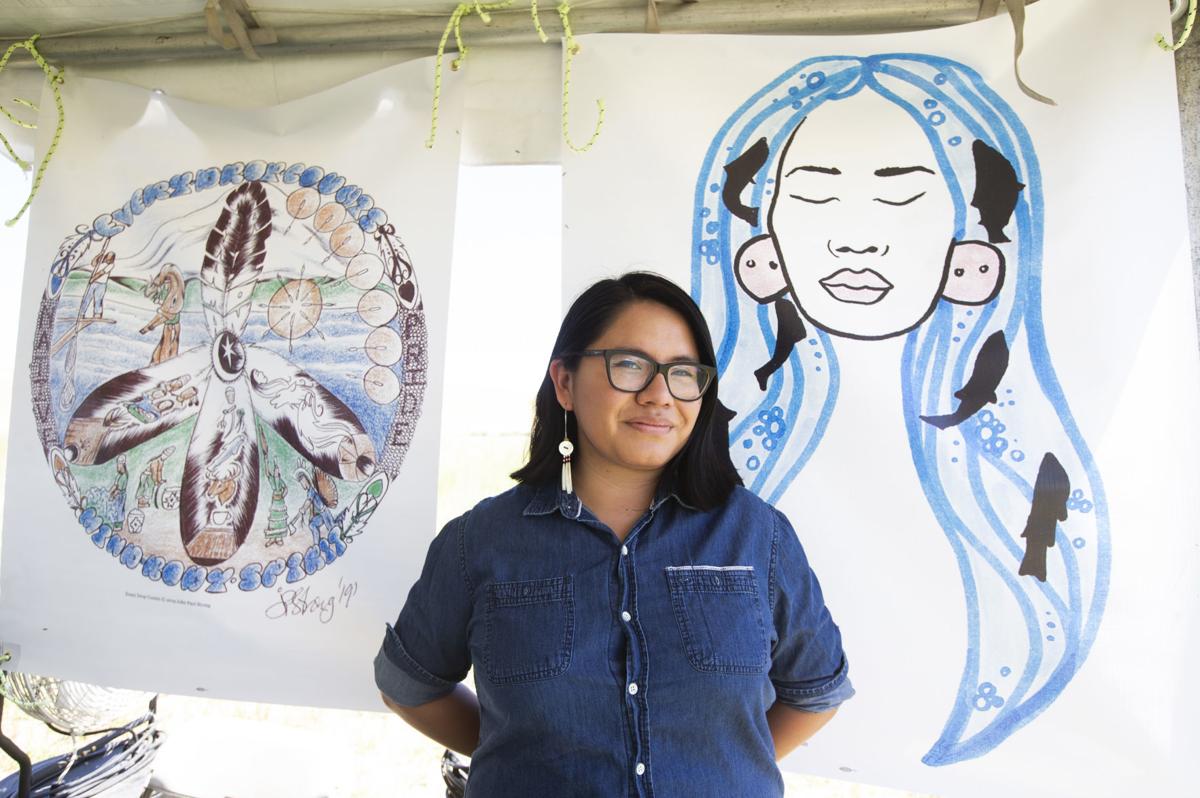 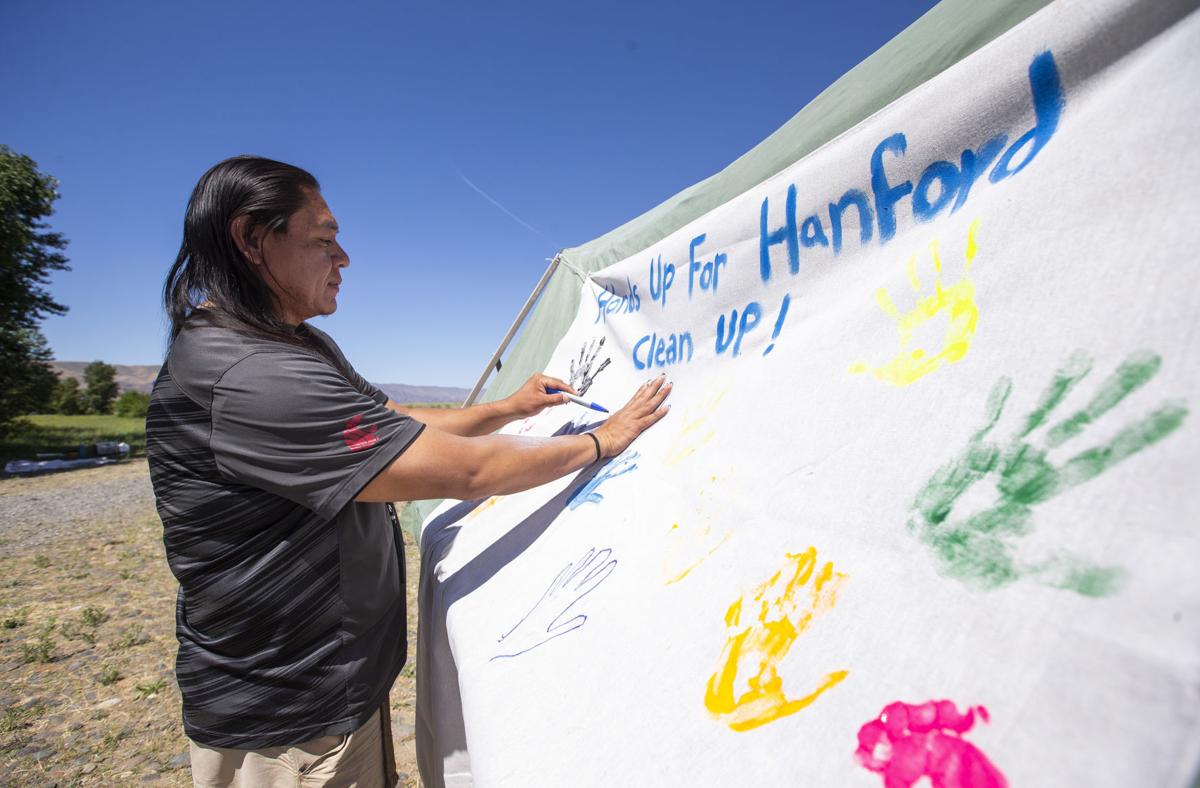 Michael Buck traces his hand on a banner where others had already left their handprints during The Hanford Journey on Friday. 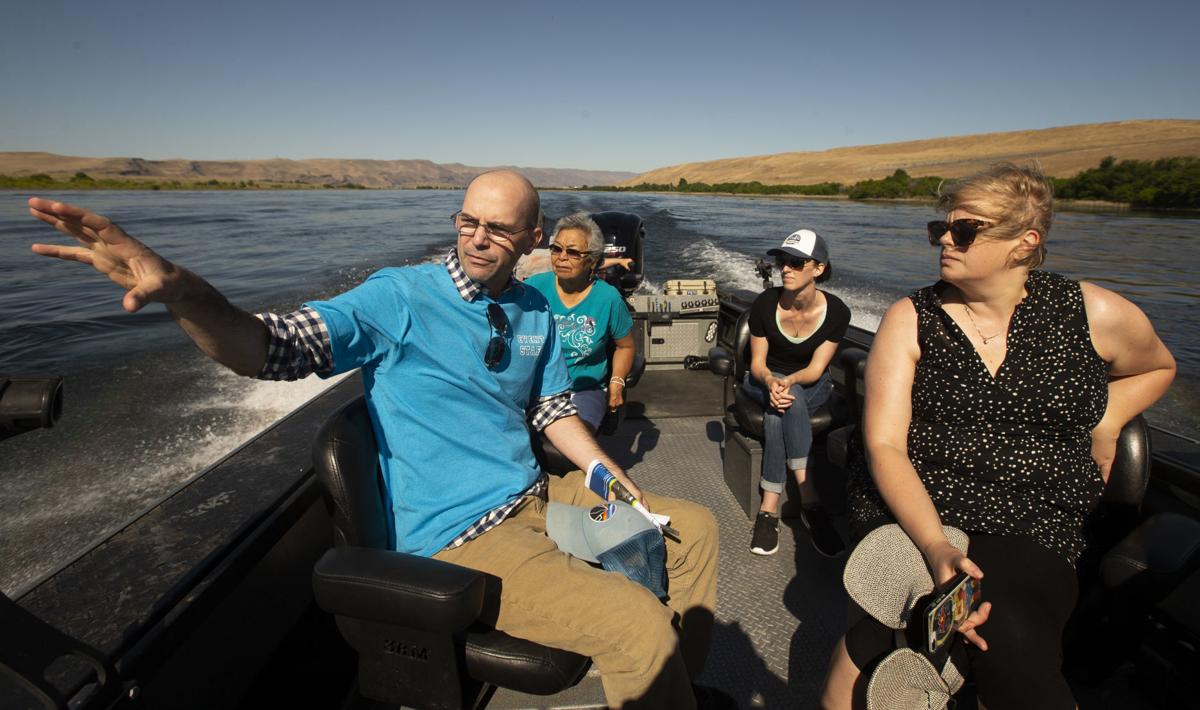 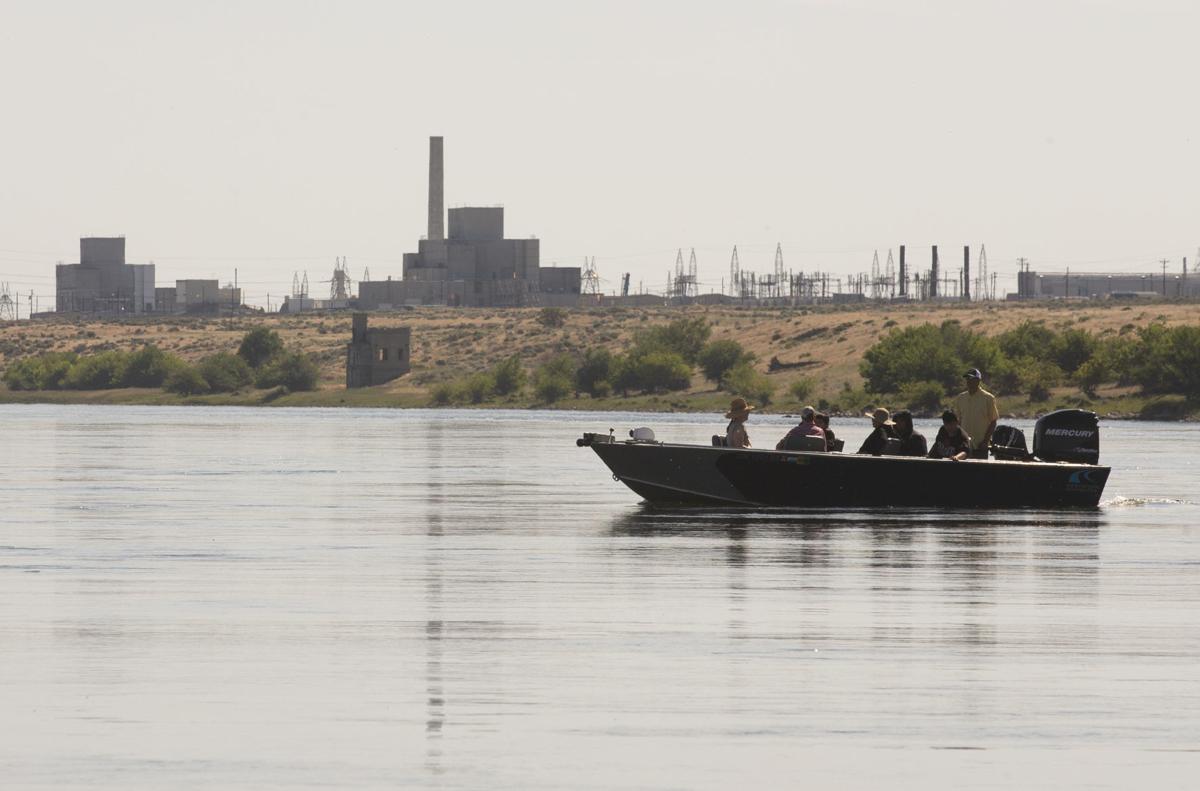 A tour boat turns around on the Columbia River near Hanford’s K reactors on Friday as part of the Hanford Journey, an event put on to honor the legacy of Russell Jim and raise awareness to cleanup efforts of the Hanford site.

The Swan Dancers pose with a sign on the shore of the Columbia River before performing at the Hanford Journey on Friday at Hanford Reach.

Michael Buck traces his hand on a banner where others had already left their handprints during The Hanford Journey on Friday.

A tour boat turns around on the Columbia River near Hanford’s K reactors on Friday as part of the Hanford Journey, an event put on to honor the legacy of Russell Jim and raise awareness to cleanup efforts of the Hanford site.

MATTAWA — More than 150 people gathered Friday for the first day-long “Hanford Journey,” a collaboration between the Yakama Nation and the Columbia Riverkeeper to both honor the life and legacy of tribal environmental leader Russell Jim and to acknowledge that the fight continues.

Jim — who was born Nov. 26, 1935, and died April 7, 2018 — is best known for the stance he took against the unsafe disposal of nuclear waste at the Hanford nuclear reservation near Richland. Jim’s input before the Senate subcommittee on nuclear regulation in January 1980 in Washington, D.C., helped lead to final legislation that recognized tribal sovereignty and blocked efforts to make Hanford the nuclear waste repository.

Jim also served as the founder and manager of the tribe’s Environmental Restoration and Waste Management Program.

The Hanford Journey started off with 45-minute tours in boats, provided by Tri-City Guide Service, to the B reactor — one of nine plutonium reactors built at Hanford — and across the Columbia River that Jim reportedly loved and near the land he spent his life protecting.

Brett VandenHeuvel, executive director of the Columbia Riverkeeper, noted the river’s health is still under attack.

In June, the U.S. Department of Energy moved to reclassify some of the site’s remaining high-level waste as low level in an attempt to save $40 billion in cleanup costs and quicken the cleanup process.

The reclassification would allow the government to leave the waste in the ground, the results of which would be disastrous, VandenHeuvel said. Exposure to radioactive waste causes health problems such as cancer and reproductive and nervous system issues in humans while also destroying habitat and wildlife.

“Changing the name of something doesn’t make it any less dangerous,” VandenHeuvel said. “We wouldn’t see the result tomorrow. But over decades and centuries, that waste will leak into the land, the soil and the river. It’s easier to isolate the waste now, before it gets into the Columbia River.

“At that point,” he continued, “it’s almost too late.”

A celebration of accomplishments

The daylong Hanford Journey started with a prayer for the river. Lunch, performances by the Yakama Nation Swan Dancers, speakers and a hike out to White Bluffs and the Hanford Reach National Monument to view the H, DR, D and F plutonium reactors followed.

Friends and co-workers spoke of Jim as a man with a deep understanding of his tribal culture, the environment and the history of plutonium at Hanford.

Alfrieda Peters, an enrolled member of the Yakama tribe who spent years working with Jim on Hanford issues, said Jim was a fierce protector of treaty rights and of a better world for upcoming generations — a message she’s taken to heart.

“The Yakama Nation still has ties to this ancestral land and to the ancestral people, who are still here in the songs, the prayers, the land,” she said. “For the future generations, do we want to be the elders that did something, or did nothing? This cleanup is not going to happen overnight, but we have to do something now.”

Polly Zehm, deputy director of the Washington Department of Ecology who worked with Jim for many years, said Jim’s lifelong dedication to the Hanford cleanup and his views about the Earth inspired her to change her own perspective.

The Hanford Reach is one of the only remaining stretches of the Columbia River where chinook salmon spawn in significant numbers, VandenHeuvel said.

The area also is home to other threatened stocks including steelhead and bull trout, as well as 43 other stocks of fish, 42 species of mammals, 258 species of birds, and more than 1,500 species of invertebrates.

But toxic and radioactive pollution from the Hanford site is threatening the fish and wildlife, with the long list of toxins in contaminated groundwater that makes its way to the river, including chromium, nitrate, tritium, strontium-90, trichloroethene and uranium.

Yakama Nation Tribal Chairman JoDe Goudy framed the discussion about Hanford by pointing to a long list of documents and case law, starting with the Doctrine of Christian Discovery, that set the precedent of giving absolute dominion over land and resources to the U.S. government, with often disastrous and dehumanizing results — with Hanford at the top of the list.

“If we’re going to take a stand here, what is that stand going to be?” Goudy asked. “What can we do that will make a world for our children that is worth living in?”

Carmen Selam, who recently graduated from the Institute of American Indian Arts in Santa Fe, N.M., said her mother worked for the Hanford cleanup efforts and that she was raised to respect the land.

Selam was one of the winners of an art contest sponsored by the tribal waste management program and the Columbia Riverkeeper. The contest aimed to inspire environmental advocacy through the arts.

“I was brought up with the idea that if we take care of the waters, they will take care of us,” she said. “Water is a source of life, and the cleanup at Hanford needs to be ongoing.”

Morris Uebelacker, a professor at Central Washington University who was also a longtime friend of Jim’s, encouraged attendees to push through resistance they encountered and continue fighting to protect the land.

“This is the only fight in town that matters,” Uebelacker said. “Because if you lose this one, nothing else matters. And Russell knew that.”

A board with Post-It notes nearby encouraged attendees to leave their takeaway thoughts about the Hanford Journey. The anonymous notes included messages such as “Use your voice to fight this!” and “We still don’t know all of the long-term effects this site will have on the future generations.”

One note summed up Hanford in six words: “Our children/families deserve safe resources.”

Several nonprofit groups, including The Hanford Challenge and Heart of America Northwest, were on-site to encourage people to become involved with ongoing advocacy efforts — including to stop the Department of Energy from reclassifying high-level waste at the Hanford site to low-level waste and other cleanup shortcuts.

VandenHeuvel said there are many ways people can get involved and that small-scale efforts — as simple as reducing waste and choosing eco-friendly products, and as complex as getting involved with policy decisions about Hanford — can make a big difference.

“Radioactive waste leaking into the river to poison people is a serious national security matter,” he said. “To quote Jim, in cleaning up Hanford, you’re taking care of all people, not just the Yakama.”

Documentary on Yakama elder to be shown Monday at Heritage University