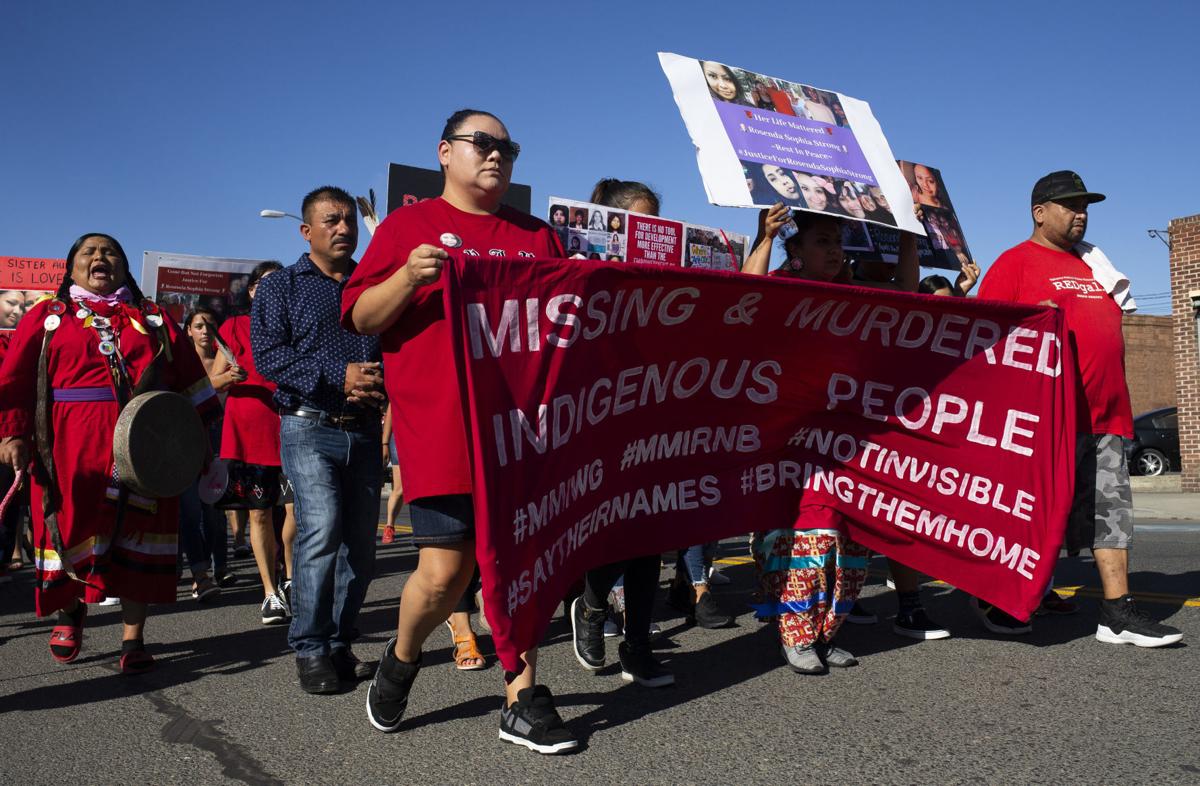 People walk across Wapato to raise awareness for missing and murdered indigenous people during the Justice For Rosenda prayer walk Saturday. 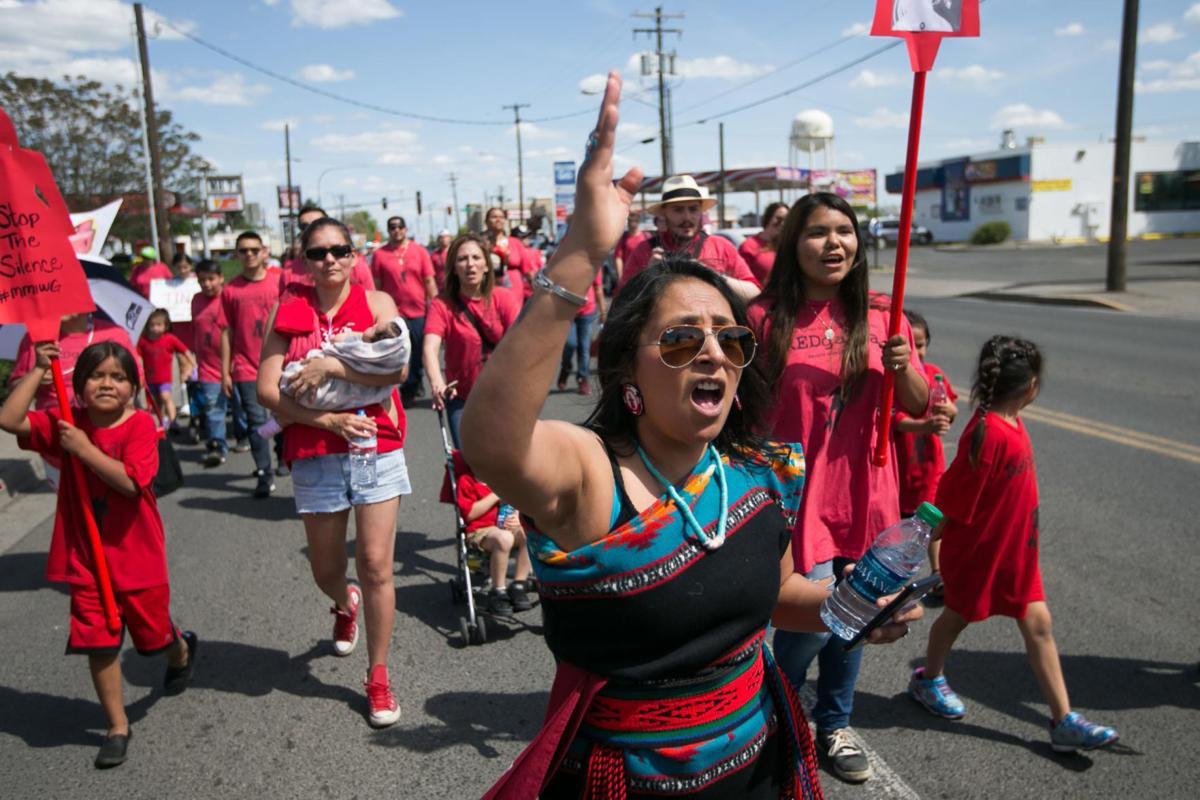 Josey Tenorio Tewa of Hopi Nation participates in the May 5 national Missing and Murdered Indigenous Women march in Toppenish. 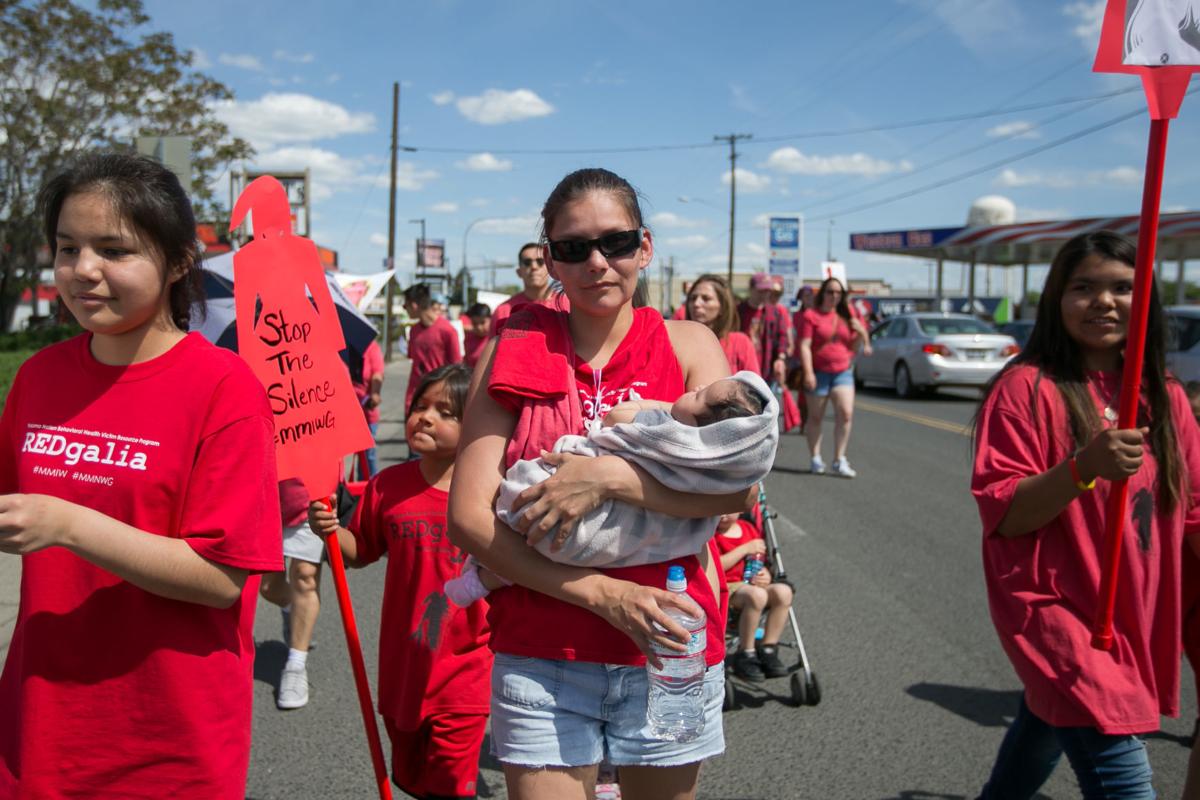 People walk across Wapato to raise awareness for missing and murdered indigenous people during the Justice For Rosenda prayer walk Saturday.

Josey Tenorio Tewa of Hopi Nation participates in the May 5 national Missing and Murdered Indigenous Women march in Toppenish.

A leading advocate for missing and murdered indigenous women and girls has said they go missing three times: in life, in the media and in the data.

And in a strongly worded study issued Friday, the Urban Indian Health Institute added to Annita Lucchesi’s statement in saying a Washington State Patrol report shows they go missing a fourth time: in the government agencies that are meant to serve them.

The 42-page “MMIWG: We Demand More” serves as a response to the State Patrol’s report on missing and murdered indigenous women and girls released in June, institute leaders said. State Patrol’s report was mandated by 2018 legislation to determine how to increase resources for reporting and identifying missing Native American women.

“We will not be content with mediocre work,” said Abigail Echo-Hawk, institute director. “We will not let the lives of Native women be a checkbox that meets minimum requirements. We are demanding more.”

The institute is the research division of the Seattle Indian Health Board. It is one of 12 Tribal Epidemiology Centers in the United States conducting research and evaluation, collecting and analyzing data, and providing disease surveillance.

“We did this study to show the state how a study like this should have been done,” Echo-Hawk said. “It is imperative that indigenous people and organizations be involved and that the information is relevant and beneficial to Native people.”

One of the main goals of the 36-page Washington State Patrol “Missing & Murdered Native American Women Report” was establishing how many Native women are missing in the state. In that, WSP faced a daunting task.

There are barriers to gathering data regarding missing Native American women, the report notes. No federal agency has comprehensive data on how many indigenous women are murdered or missing, and numbers vary among multiple databases, many of which are not available to the public.

According to information in the WSP report from the National Crime Information Center — which is maintained by the FBI and is available only to law enforcement — in May, the state had 1,802 missing persons. Of those, 56 were missing Native women. The report broke that number down by counties; Yakima County had 20 Native women who were missing that month, the highest county total by far. Only King County, with 12, was close.

“This is a beginning. This is truly just the beginning and we are committed to continuing and seeing this through,” report author and WSP Capt. Monica Alexander said at the time.

As of May 1 the Yakama Nation’s Police Department had six unsolved cases involving missing or murdered men and women and 18 historical “cold cases that remain unsolved,” a letter included in the state report said. The letter was from the Yakama Nation Tribal Council’s missing and murdered indigenous women committee to Alexander and the governor.

No one knows exactly how many Native people have gone missing from the 1.3-million-acre Yakama reservation or outside its borders over the decades. Many cases of missing people or mysterious deaths of women and men remain unsolved.

The Yakima Herald-Republic has a list of 31 cases of missing and murdered Native women tied to the Yakama reservation that dates from 1957. The list includes five cases of missing women, six mysterious deaths, 17 unsolved homicides on or near the reservation, one unsolved homicide in Seattle, and two more homicide cases active in the court system.

While the State Patrol report was the first of its kind conducted by an individual state, “it is severely lacking in the rigor that could ultimately lead to better conditions for Native women and girls,” institute officials said Friday.

Inaccurate and incorrect information of race undermines and diminishes the ability to understand the true scope of missing Native women in Washington state, the report says. While there hasn’t been a comprehensive study on racial misclassification in Washington state law enforcement data, a study conducted in Pacific Northwest hospitals found a 44 percent incidence of racial misclassification of American Indian/Alaska Native patients, it notes.

“Washington State Patrol found 56 missing Native women in Washington state, but estimating the possibility of a 44 percent instance of racial misclassification, that number could be as high as 80,” the institute report said.

The group’s report shows the gaps that will impact laws to support the justice and safety of Native women in Washington and other states, said Emily Washines, a Yakama historian and advocate for missing and murdered Native women.

“If you have gaps in the data, you have a potential gap in the law,” she said.

Last November, the institute released Missing and Murdered Indigenous Women and Girls: A snapshot of data from 71 urban cities in the United States. Among its findings was rampant racial misclassification in gathering data on Native populations — one of the main reasons for undercounting violence against Native women.

“Racial misclassification has been a problem and will continue to be a problem until it is recognized by entities other than Native-led and tribal organizations,” said Adrian Dominguez, its director of informatics and epidemiology. “The state needs to listen to us when we tell them that their data is an undercount.

“Until Native women and girls are acknowledged as being Native, the data for indigenous communities won’t be accurate.”

The study said 45 percent of those who identify as American Indian or Alaska Native do so in combination with another race.

Carolyn DeFord, whose mother, Leona LeClair Kinsey, has been missing for 20 years, spoke about that during a private roundtable held in Yakima by U.S. Rep. Dan Newhouse, R-Sunnyside, in late May.

“For 18 years of her disappearance, she was classified as white,” DeFord said. She and others recently gathered in La Grande in remembrance of the 20th anniversary of her mother’s disappearance. DeFord organized the public event to remember all relatives who are missing and honor those who were taken too soon.

Jurisdiction on reservations is another challenge. It varies among law enforcement agencies operating without a comprehensive data collection system for reporting or tracking missing women. Tribal police handle missing person cases but don’t investigate homicides; that is the responsibility of the FBI. Local law enforcement agencies occasionally work with tribal police, but the Washington State Patrol has no jurisdiction on tribal land.

On some reservations, there is non-tribal land on which tribal police do not have jurisdiction. “Because of that, our women and girls who go missing and are murdered are not getting the same law enforcement attention that would be provided to non-Native women and girls,” said Lael Echo-Hawk, an attorney and co-author of the report.

Along with a forensic audit of State Patrol data to address the rates of racial misclassification and establishing best practices in data collection, “MMIWG: We Demand More” offers several recommendations:

“This is currently mandated in Oklahoma, New Mexico, Tennessee, New York, Michigan and Illinois,” the report says. “Prior to building a new data system such as the one proposed in the Washington State Patrol report, start with using what is already available.”

Washines is hopeful that “MMIWG: We Demand More” will prompt others to consider how they can help.

“I find this report inspiring and I ask our communities and tribes to think of how we can each respond to the call for data regarding our missing and murdered indigenous women,” she said.