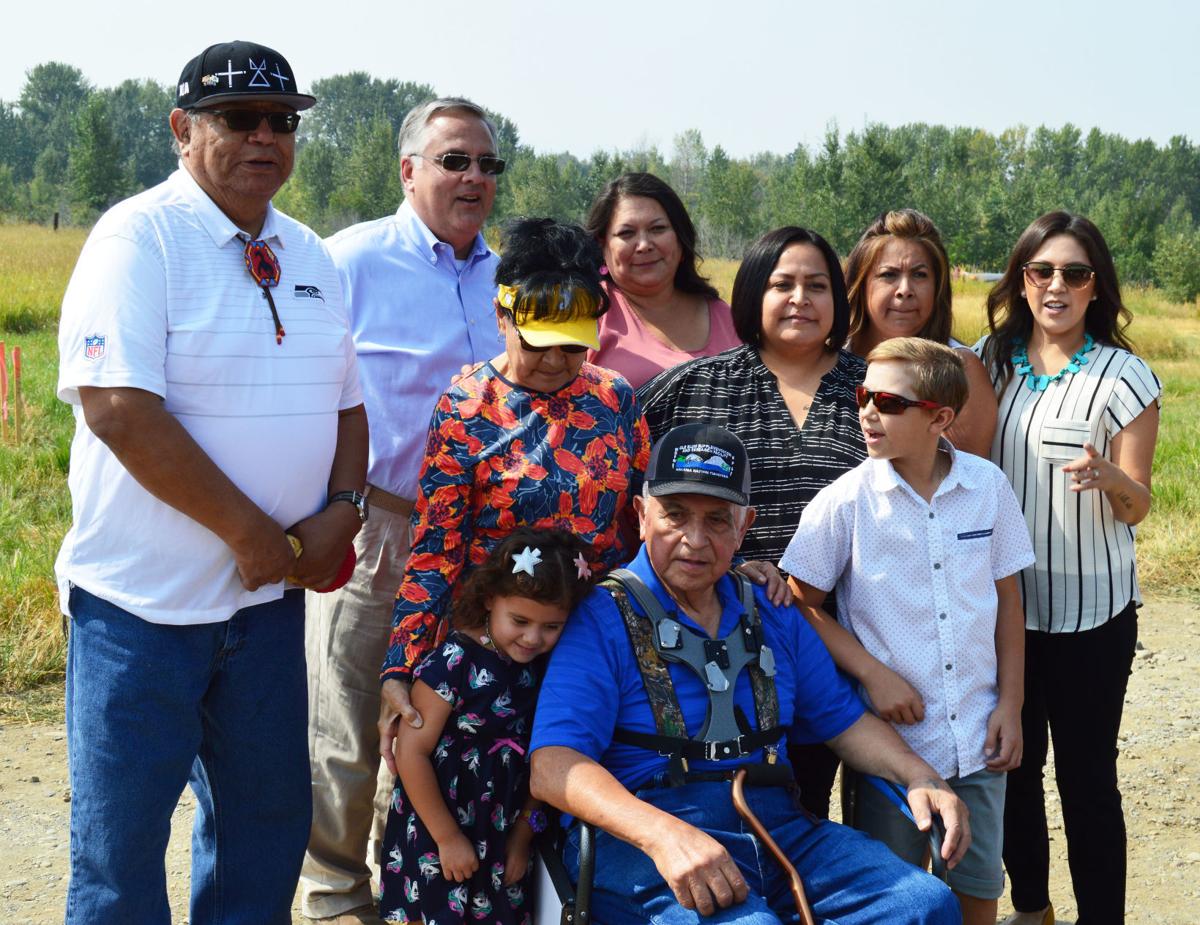 Melvin Sampson poses with family members and representatives from the Yakama Nation and the Bonneville Power Administration at the Melvin R. Sampson hatchery complex groundbreaking event in Ellensburg Wednesday. 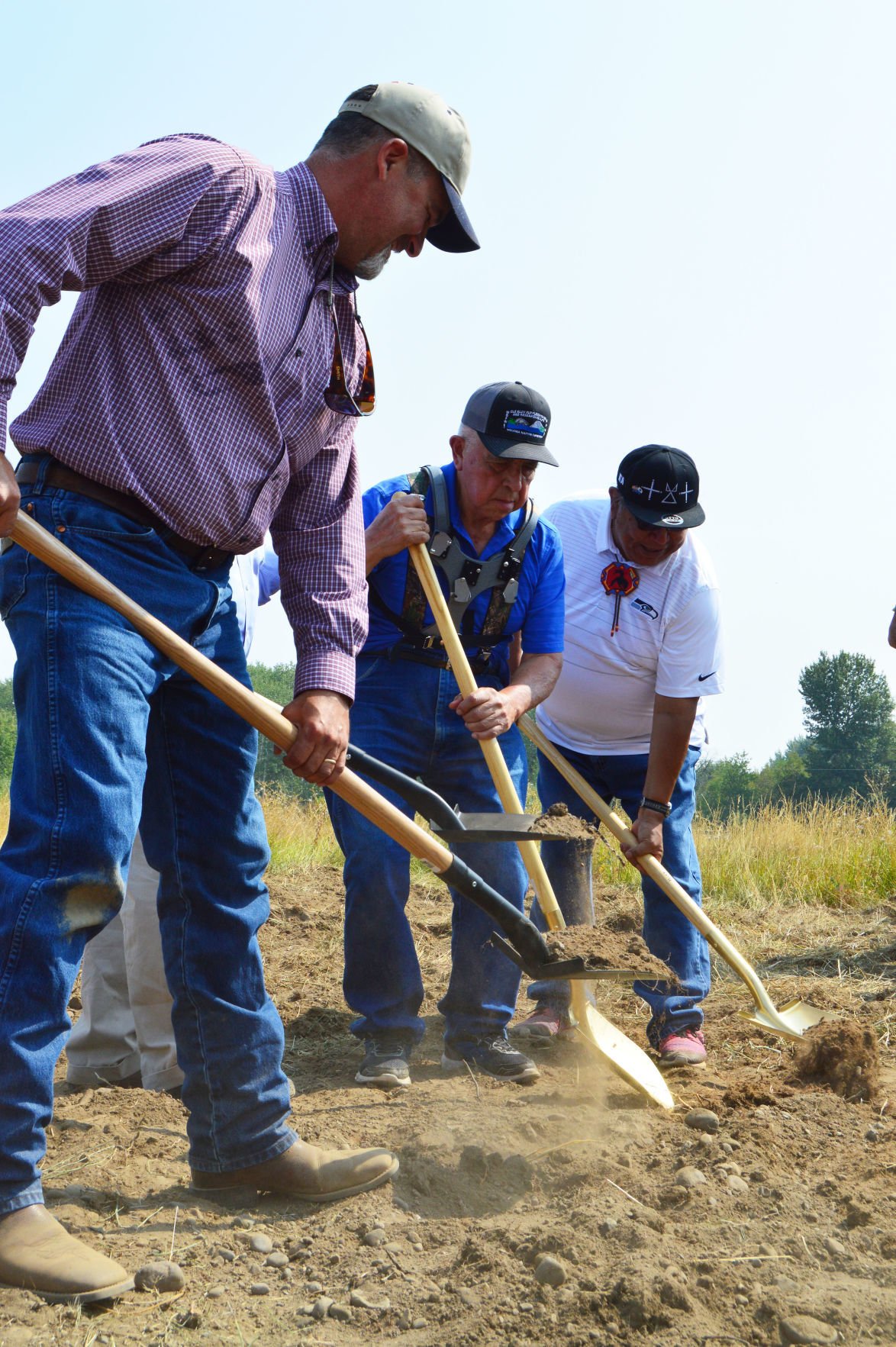 Melvin Sampson poses with family members and representatives from the Yakama Nation and the Bonneville Power Administration at the Melvin R. Sampson hatchery complex groundbreaking event in Ellensburg Wednesday.

DJ Brownlee remembers fishing for chinook salmon at Sunnyside Dam with his father while growing up in Wapato.

Through the years, and now as a hatchery foreman with the Yakama Nation Fisheries, he’s seen drought, habitat loss and dam construction continue to threaten the existence of the fish and tribe’s way of life.

“I started my fisheries career at the Klickitat Salmon Hatchery and when I first started seeing we weren’t having any more winters, warm summers, not very much snowfall or runoff, I could see this coming,” Brownlee said. “I saw the environment changing and I had a recurring nightmare, if you will, that the Klickitat ran dry.”

Although droughts haven’t gotten that extreme, accelerating temperature increases have created the need to help salmon adapt quickly to survive. Three tribal facilities on the Yakima River already aid the resilient fish, and groundbreaking last week for a fourth — the Melvin R. Sampson Coho Facility northwest of Ellensburg — represents another big step toward that goal. Pegged at $16 million for design and construction, the facility is targeted to open in fall 2019.

Brownlee will serve as its operations manager. He and two tribal members will live on-site at a facility expected to employ all the latest technology and methods, making it far superior to the Cle Elum facility where Brownlee works.

Yakama Nation research scientist Mark Johnston said he hopes the facility can raise 700,000 coho annually and bring back average runs of more than 20,000.

Members of the Yakama Nation share a deep spiritual and cultural bond with salmon, not only for its sustenance to the tribe, but also its value to the Yakima River ecosystem.

Biologists believe anywhere from 44,000 to 150,000 coho once swam in the upper Yakima River each year to spawn in its many streams and tributaries.

Those numbers dropped precipitously until 1985, when they reached averages of zero at Prosser Dam and just a few hundred at McNary Dam on the Columbia south of the Tri-Cities, according to Yakama Nation coho project lead Todd Newsome. Salmon recovery efforts started around the same time, and Yakama Nation Fisheries data manager Bill Bosch said the tribe began “bucket brigades” in 1995 to plant surplus coho from hatcheries into tributaries along the Yakima.

Newsome said the average runs slowly rose back up to about 3,000-4,000 each year, with a high of 24,000 coho in 2014. But to develop a plan to truly bring the coho back, the tribe needed help from the Bonneville Power Administration and the owners of the former Holmes Ranch near Ellensburg.

“The goal is also partly to help restore natural runs of coho,” project manager Amy Mai said. “But the primary benefit is harvest.”

A 2005 agreement gave the Yakama Nation 50 acres on the property, and a 2012 master plan outlined the BPA’s commitment to fund the facility named after Sampson, a highly respected former tribal chairman.

Armed with new technology, Johnston said the tribe prefers to avoid the term “hatchery” for its salmon-raising efforts. Monitoring, testing and research goes well beyond simply rearing fish and setting them free, he explained.

Improvements to be incorporated into the Melvin R. Sampson Coho Facility include a well system designed to reuse 75 percent of its water, means it should be able to operate on 1,200 gallons a minute. The 21-year-old Cle Elum facility uses 14,000 gallons a minute to raise the same amount of fish.

Circular tanks rather than classic rectangular raceways to hold the fish force them to become stronger swimmers, and Johnston said every fish will be sampled for diseases.

Raising the coho in the upper Yakima River where they’ll live also gives them a much better chance of survival than the current program, which places young fish from the Prosser Dam and Oregon’s Eagle Creek National Fish Hatchery into Yakima tributaries with mobile tanks to help them acclimate. The young coho stay in those tanks for four to eight weeks before they are released in the water.

“It’s good science to raise your fish in-basin instead of bringing them out of basin because from basin to basin they’re DNA-specific,” Brownlee said. “They’ve environmentally engineered.”

He hopes to help raise a late run, which would be released in the fall and be expected return from the ocean to spawning grounds between November and January. Johnston said that would help the coho avoid warmer summer water temperatures in the Columbia, which can keep some salmon from migrating back upstream.

Of course, it will take some time to raise enough juveniles and adults to create a self-sustaining wild population. Johnston said coho raised at the facility need four to five generations, or 12-15 years, to become truly wild.

While Bonneville Power Administration funds enable construction and eventually operations at the coho facility, other important work must be done to give the salmon a better chance of survival.

That means efforts from the tribe, the BPA and other partners to restore old habitats in nearby streams and places such as Reecer Creek or the Teanaway north of Cle Elum. Progress can already be seen with the program to raise spring chinook near Cle Elum.

“They hadn’t had a salmon fishery in this river for over 50 years,” Johnston said. “Because of the Yakamas bringing fish back, they have those opportunities now.”

Fish should also benefit from a federal court’s June decision to require the state to use taxpayer funds to fix more than 900 culverts blocking salmon passage.

More work continues in the lower Yakima at the Prosser Dam, where coho and spring chinook are reared solely for harvest with no focus on a spawning population.

Although helping tribal members reach their harvest allotments as required by treaties remains the top priority, the success of the Yakamas’ work means more opportunities for all Washingtonians to catch salmon. The Washington Department of Fish and Wildlife co-manages the fishery and allows anglers to catch six and retain up to two adult salmon daily below Prosser Dam.

If populations continue to increase in the upper Yakima, Johnston said, new evidence at Cle Elum Lake shows anglers won’t be the only ones to benefit. Salmon returning from the ocean enhance the entire ecosystem by giving protein to animals and saltwater isotopes to plants.

“Deer and elk will go down there,” Johnston said. “You see raccoons, you see the skunk and so it’s big. (Salmon) are a huge part of the ecosystem and it’s been missing for a long time and so we should see a response from everything.”

TOPPENISH, Wash. -- Yakama Nation citizen and scholar Emily Washines will talk Wednesday about the link between culture and food and the conse…