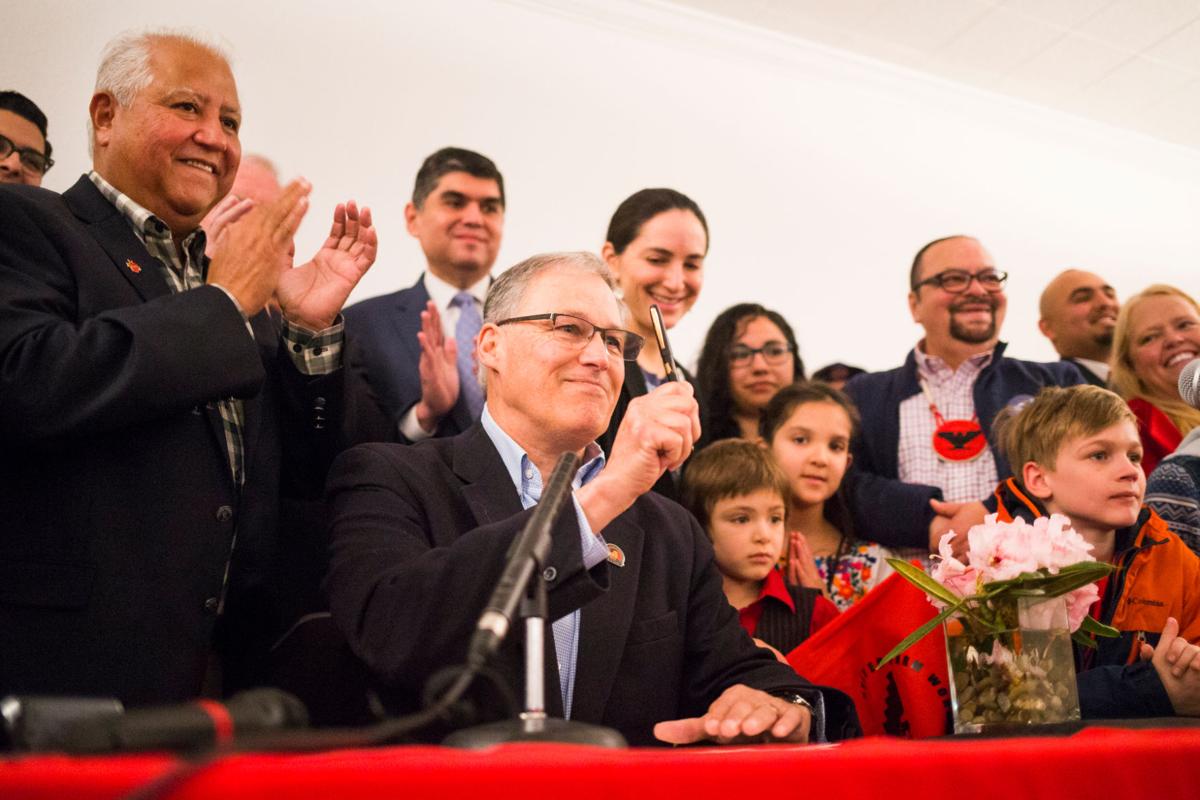 Gov. Jay Inslee holds up the pen he used to sign House Bill 1939, establishing March 31 as Cesar Chavez Day in Washington State, at the Yakima Union Hall in Yakima, Wash. on Saturday, March 31, 2018. To the left of Inslee is Paul Chavez, son of Cesar Chavez and president of the Cesar Chavez Foundation. Cesar Chavez was an American labor leader and civil rights activist who co-founded the National Farm Workers Association. 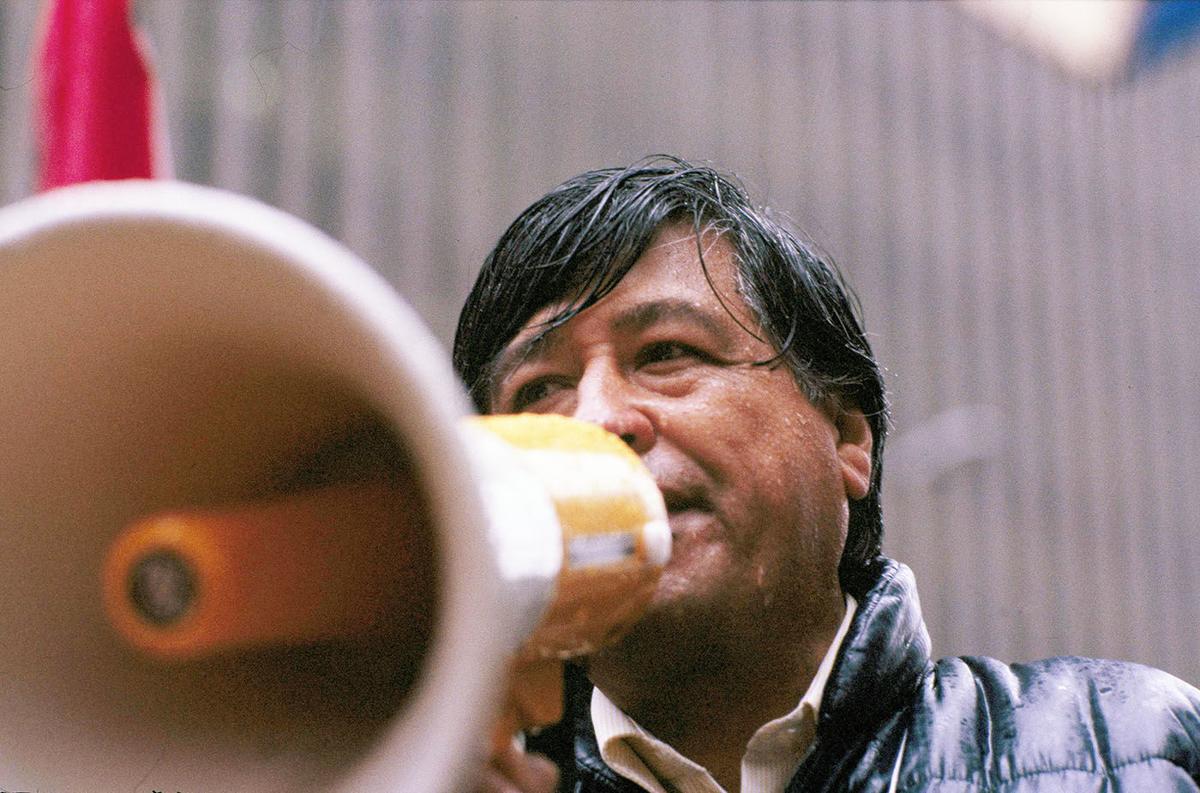 Gov. Jay Inslee holds up the pen he used to sign House Bill 1939, establishing March 31 as Cesar Chavez Day in Washington State, at the Yakima Union Hall in Yakima, Wash. on Saturday, March 31, 2018. To the left of Inslee is Paul Chavez, son of Cesar Chavez and president of the Cesar Chavez Foundation. Cesar Chavez was an American labor leader and civil rights activist who co-founded the National Farm Workers Association.

Martin Yanez remembers Cesar Chavez as a labor leader with the courage to admit he didn’t have all the answers to farmworkers’ problems.

Francisco Malgof recalls a man who oozed authenticity simply by the way he carried himself and the clothes he wore.

And when Tony Sandoval hears Chavez’s name, he’s reminded of a man who respected him and his college friends regardless of their age or inexperience.

All three hoped to be on hand Saturday when Gov. Jay Inslee comes to Yakima to sign legislation declaring March 31 “Cesar Chavez Day.”

“We have days for Native Americans, Korean-Americans, for children, for veterans ... but not a person or a group that Latinos can look toward,” one of the bill’s sponsors, Rep. Zack Hudgins, D-Tukwila, said during a speech before the House earlier this year.

“This is a small day that isn’t a paid holiday, is not a day off. It’s a simple day of recognition,” he said.

That recognition acknowledges the importance of the work Chavez did for Latino farmworkers who continue to be a large part of the state’s billion-dollar agricultural industry, Hudgins said.

Before his death in 1993, Chavez visited the Yakima Valley several times, urging county residents to support boycotts, strikes and other initiatives. In 1986, he led a march from Granger to Yakima. Not all the visits were without controversy.

When Chavez visited Granger in 1969, his supporters wanted to use the junior high school’s gym, a request that was initially denied by the school board. His supporters called the denial a racially based action against Chavez and his movement. The school board denied the charge, saying the gym floor needed maintenance, but the public outcry led it to reverse its decision.

Five decades later, nearly half of the state lawmakers whose districts include parts of the Yakima Valley voted against the March 31 designation.

“You can have celebrations without having a state holiday,” said Rep. Bruce Chandler, R-Yakima, who voted against the bill. “Cesar Chavez’s impact has been notable. But a lot of people have made a notable impact and I don’t think the day designation is the right thing.”

The still-lingering dissension hasn’t tainted the memories of residents who had the opportunity to meet or hear from Chavez during his 66 years. The Yakima Herald-Republic recently talked with some of those people to hear their stories.

I was a volunteer organizer for the farm workers union and met Cesar Chavez for the first time in 1974 when we went for a week-long staff meeting east of Bakersfield, Calif.

He walked us through what he expected from us as organizers — things like fundraising, reports we had to file about what we were doing in our communities or strikes, if it came to that.

But it was what Chavez didn’t say — his actions and demeanor — that encouraged people to follow him.

I think what I loved most about him is how he was humble — he hated egotistical people — but was still a leader. It was just the way he carried himself. He was at peace with himself and the way he did things.

He knew we had a mission to carry out, but he didn’t think there was anything spectacular about it.

To further that mission, he asked us to be good listeners because we didn’t have all the answers to the problems of farm workers. That takes a lot of experience for somebody to know that and say it.

The one thing that I’ll always remember, he said never to back down in front of farm workers. Because if you back down, they’ll never follow you.

I think he was saying to be courageous. It didn’t necessarily mean there’s an absence of fear, but we had to confront it. We had to be strong.

When Chavez came to Granger I was in my 20s.

Before he came, the whole community was talking and wondering about him. They heard he was a communist and that he was just in it for himself.

The junior high gymnasium where he was going to speak was full, mostly of Mexican people. You could tell they were there because they wanted to know who he was for themselves.

He walked out looking down at a piece of paper in his hand. He was really humble and seemed kind of shy.

He wore a white work shirt and dark work pants — he was just being himself.

After people got a view of him, they all started cheering.

The way he presented himself, without saying anything, told people who he was.

He looked up, gave them a humble smile and began to talk — in English first, then in Spanish. He spoke from his heart.

After that, I didn’t hear people say anything bad about him because it was obvious those rumors weren’t true.

He inspired me and other Chicanos to grow up, graduate high school and college and then come back to continue making our community better.

I was in college when I met Cesar Chavez. I helped bring him to campus to speak to students.

When he got here, he wasn’t like other famous people or politicians. He was down-to-earth. He talked to us just like you’d talk to anyone else across the table.

And he respected us even though we were young and inexperienced. When he interacted with us college students, he did a lot of listening instead of telling us how to get organized or anything else.

I remember one time he visited Yakima Valley College and they gave him a sweater that he put on right away, over his clothes.

He didn’t have to do that.

He was just so gentle and had the ability to listen — I think that’s why people gravitated to him so much. People move away from people who are rude or obnoxious or think they’re all that. But they want to spend more time with someone they would call dad or grandpa, someone they feel comfortable around.

It was that, that made him take over any room he was in. And I haven’t seen a leader like him since.

What: Gov. Jay Inslee signing a bill formalizing March 31 as “Cesar Chavez Day” for the state of Washington

All community members are invited

Events will include several speakers, music and refreshments.