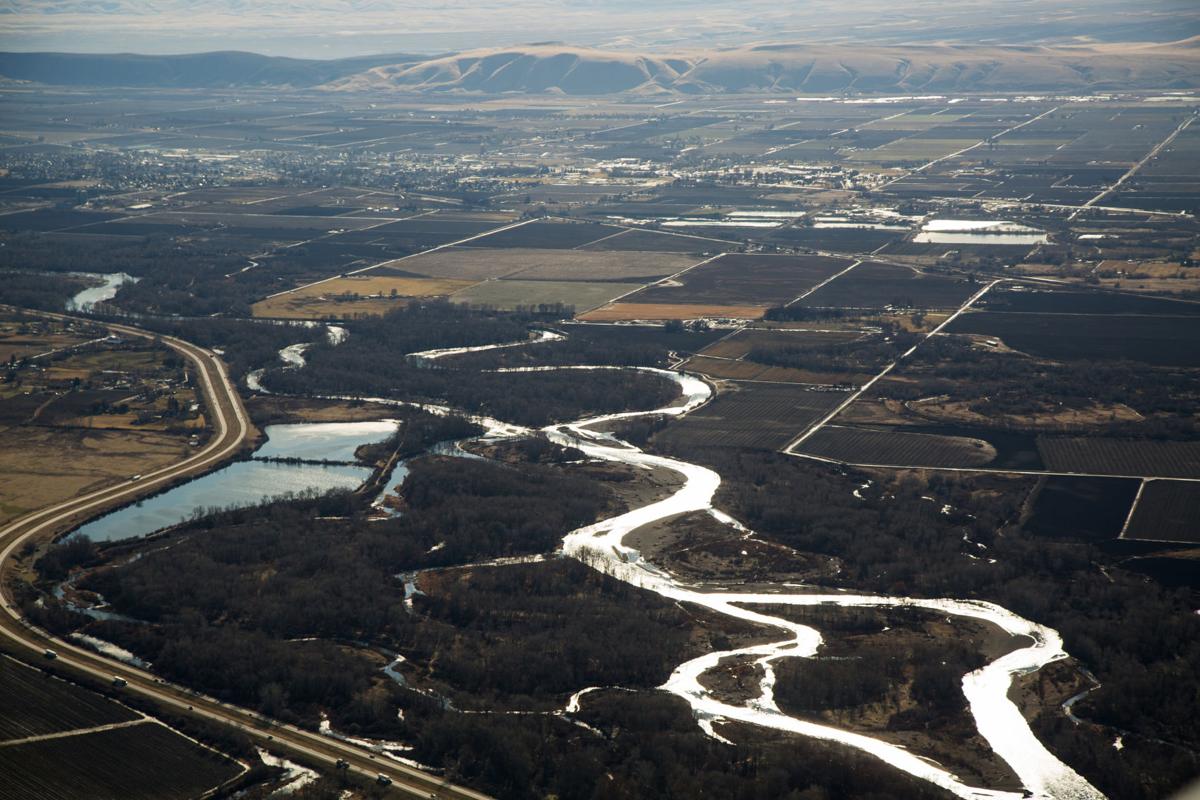 The Yakima River winds south of Union Gap, Wash., Wednesday, Jan. 10, 2018. Federal legislation that would authorize the initial development phase of the Yakima Basin Integrated Plan, a 30-year, $4 billion initiative to improve water resources throughout the region has been approved in Congress and is awaiting a presidential signature. (SHAWN GUST/Yakima Herald-Republic file photo) 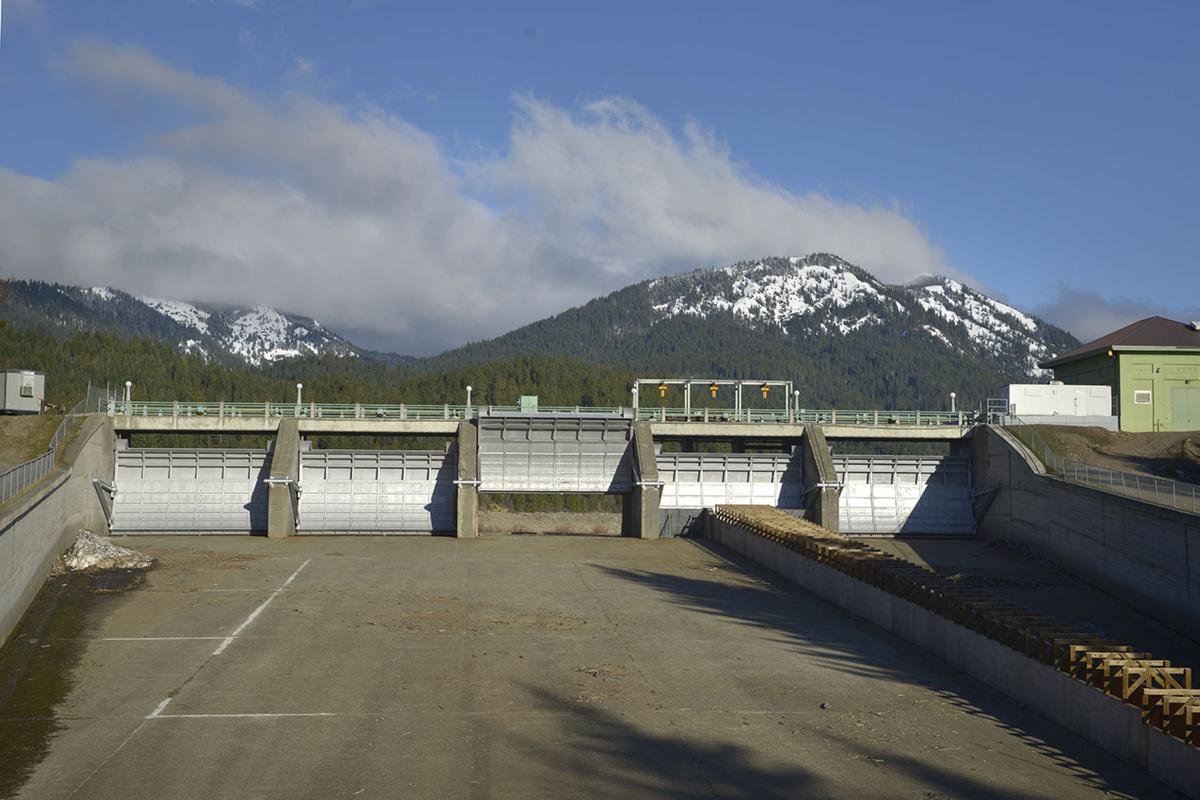 The Cle Elum pool raise project is part of the Yakima Basin integrated water plan that aims to improve water resources throughout the region. (Photo courtesy Kirsten Strough/U.S.Department of the Interior, Bureau of Reclamation)

The Yakima River winds south of Union Gap, Wash., Wednesday, Jan. 10, 2018. Federal legislation that would authorize the initial development phase of the Yakima Basin Integrated Plan, a 30-year, $4 billion initiative to improve water resources throughout the region has been approved in Congress and is awaiting a presidential signature. (SHAWN GUST/Yakima Herald-Republic file photo)

The Cle Elum pool raise project is part of the Yakima Basin integrated water plan that aims to improve water resources throughout the region. (Photo courtesy Kirsten Strough/U.S.Department of the Interior, Bureau of Reclamation)

Crucial federal funding to improve the Yakima River Basin’s water supply is once again before Congress, but language in a House bill could spell trouble.

A bill introduced last November by Rep. Dan Newhouse and co-sponsored by Rep. Dan Reichert would provide $237 million in much-needed matching funds to help pay for various basin projects to aid during times of drought.

But the bill also includes provisions that would speed up environmental reviews of the basin projects and similar projects across the country — and that could mean problems in the Senate.

In a phone interview from Washington, D.C., Newhouse said adding the changes to environmental rules improves chances for passage in the House. The bill also includes funding for water resource projects in Montana, California and Kansas.

Newhouse said the environmental language is similar to 2014 legislation that got votes from many Democrats, including Murray and Cantwell.

“I think once people realize that and understand that, I think we’ll be able to move forward in a positive way here,” Newhouse said. “I’m hearing from both Republicans and Democrats that they’re understanding the dire impacts that are occurring to our communities and the needs to move faster and be able to more quickly respond.”

The key difference this time is which federal agency would have the authority to speed up the reviews.

The legislation gives the power to expedite environmental reviews to Secretary of the Interior Ryan Zinke, and that raises skepticism given his history of going against environmental advocates on issues such as offshore drilling and national parks, said Tom Tebb, director of the state Department of Ecology’s Office of Columbia River.

The first phase of modern basin improvements began three decades ago when fish screens and ladders were installed at 16 of the largest existing diversion dams and canals to improve salmon survival rates.

In 1994, Congress passed the Yakima River Basin Water Enhancement Project Act to focus on agricultural conservation and habitat enhancement, including 40 projects that are either completed or still ongoing, according to plan manager Wendy Christensen of the Columbia-Cascades Area Office of the Bureau of Reclamation.

The third, final and largest phase, known as the Yakima Basin Integrated Plan, is estimated to cost $4 billion over 30 years. Initial development began in 2013. It combines seven key elements to help agricultural, recreational and environmental interests adapt to the more intense droughts brought on by climate change. Many believe the integrated plan is a national model for cooperation in water resource efforts since it brought together sometimes adversarial groups such as the Yakama Nation, irrigation districts, the Forest Service, conservation organizations and all levels of government.

Only 30 percent of annual runoff could be stored as of 2011 — while officials say the lowest acceptable level to prevent severe economic losses to farmers would be 70 percent during a drought year. Six different years since 1992 have left the prorated Kittitas Reclamation District with between 37 and 47 percent of its typical water supply, according to district manager Urban Eberhart, illustrating the dire need for more storage.

Newhouse introduced his bill to a subcommittee of the House’s Natural Resources Committee and hopes to bring it to the full committee shortly.

He acknowledged work remains to be done to address issues expected to be problematic in the Senate, but he hopes a resolution can be found by the end of this session. He also said his staff would be exploring the possibility of including the bill with President Trump’s proposed infrastructure plan.

“We’ll work with and we have been working with the administration, having those kinds of conversations,” Newhouse said.

But not everyone agrees authorization should be given, even if the concerns over environmental regulations are addressed. A coalition of 17 local, regional and national organizations expressed concern with a lack of adequate analysis in late 2016, and Bill Campbell, a retired scientist with Friends of Lake Kachess, said that hasn’t changed.

“Let’s define the project, let’s do the analysis, let’s collect the facts and then let’s authorize it if it makes sense,” Campbell said. “It’s important for everybody to get this right and I think that’s the only thing we should all agree on.”

He said the plan’s supporters discounted a national, award-winning 2014 benefit-cost analysis by the Washington Water Research Center at Washington State University, which determined the benefits from new fish passages were overestimated and benefits of the water supply projects don’t match the expensive price tag.

But Tebb and others argue the study failed to account for the interdependency of the projects, along with the financial contributions of water users. Tebb and Eberhart disagree with the contention opponents have been ignored.

“I feel very confident that the process is open and has been open,” Eberhart said. “Everybody has had a chance to be heard and politely listened to and respected multiple times and the outreach efforts continue.”

Eberhart said federal authorization would allow irrigation districts to fund a $200 million drought relief pumping plant at Lake Kachess. Another key component would provide support for the goal of creating fish passage at all five of the basin’s major reservoirs.

“It makes it so that we can accomplish what we’re doing,” Eberhart said. “But as we’re moving forward into the future it’s allowing us to do more work on the Yakama Nation, on the Wapato Irrigation Project.”

NACHES, Wash. — Substantial flooding along the Naches River near Naches in early 2011 forced Yakima County officials to scramble together a re…