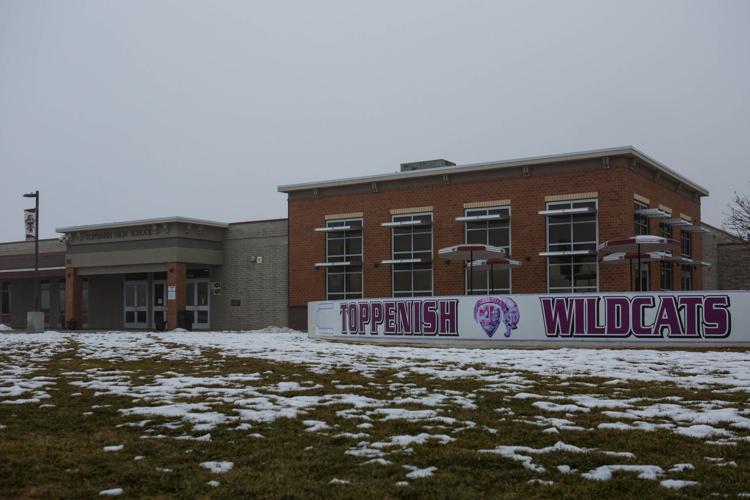 A former Toppenish School District student obtained a protection order against high school teacher and coach John L. Cerna over the summer after reporting he harassed her and sent her sexually inappropriate messages.

The student was 17 when she obtained the protection order in Yakima County District Court. She also filed reports alleging inappropriate behavior by Cerna and his wife, Bertha, with the Yakima County Sheriff’s Office, the school district and Educational Service District 105. The school district completed its investigation earlier this month and a sheriff’s office investigation continues.

Johnny and Bertha Cerna have been on paid administrative leave since June 2021.

In reports to law enforcement and education officials, the girl alleged that Johnny Cerna made inappropriate sexual advances toward her and that he and his wife gave her alcohol. She repeated these allegations in an interview with the Yakima Herald-Republic.

According to court records, the teen obtained an initial protection order in Yakima County District Court on June 1, 2021, and a subsequent, extended protection order on June 15. The Herald-Republic is not naming her because she was a minor and because of the nature of the allegations. The reporting in this article is based on court records and public record reports to Educational Service District 105, in addition to interviews with the teenager and a Toppenish School District employee who helped report these allegations to law enforcement and education officials.

Born and raised in Toppenish, the student said she met Bertha Cerna in middle school and Johnny Cerna in high school. She says she began spending time with the Cernas outside of school her junior and senior years.

At first she and Bertha Cerna would go on walks, she said. As they continued to spend time together, Bertha Cerna invited the teenager to her house and offered her alcoholic beverages, according to the girl and the report she filed with ESD 105, which was sent to OSPI.

As the girl and Bertha Cerna grew closer, the girl said Johnny Cerna became a larger figure in her life. The teenager said he was rarely around when she was at the Cerna house, but she exchanged messages on iMessage and Snapchat with the pair, which she showed to the Herald-Republic.

According to court records and the report to ESD 105, the teenager also received multiple, back-to-back messages from Johnny Cerna “spamming” her phone in April when she did not respond to him. She shared these messages with the Herald-Republic.

In May 2021, the teenager confided in a Toppenish School District employee.

The employee agreed to speak with the Herald-Republic for this story but did not want to be named since she still works in the district and feared she could lose her job.

The employee and the student met on school grounds one day, and the employee said the girl became nervous when she realized Johnny Cerna was there. The teen said that just seeing his car in the parking lot filled her with anxiety.

That’s when the student began to tell the employee some of the things that had happened between her and Johnny Cerna. The employee was required by law to report the incidents to law enforcement and did.

The teenager made her own reports with the Yakima County Sheriff’s Office and ESD 105 on May 26. She said she spoke to the sheriff’s office three or four more times in 2021.

She said the Cernas have not tried to contact her since she made her reports with law enforcement and education officials.

The Herald-Republic reached out to Johnny and Bertha Cerna regarding the allegations by phone and voicemail. They separately declined to speak without counsel but did not provide the name of their attorney or any additional comment by publication deadline.

The teen graduated from Toppenish High School in June 2021 and is continuing her education, studying psychology. She said the ordeal worsened her anxiety and insomnia. She said her depression got so severe that she stopped eating for a while. She is in therapy, but now she worries about how many more sessions her insurance will cover, she said.

She said she no longer feels safe going to the Safeway in town because she is afraid she will run into Johnny Cerna.

Though she told few people about what happened, the teen said rumors have circulated online and around town, and more people know about her involvement. She felt like people stared at her whenever she was at school activities, she said.

She said that people used to drive by her home and yell things.

Multiple agencies have opened investigations into allegations of inappropriate conduct by the Cernas, though some school staff and community members have questioned why they are taking so long and why the Cernas are still being paid by the district.

The Toppenish school board was presented a petition signed by over 300 community members concerned about the investigation at its Dec. 14 meeting, Toppenish School District superintendent’s secretary Danelia Arellano said in an email.

The petition stated that these community members felt “grave concern” over Johnny and Bertha Cerna, listing allegations of the pair providing alcohol and narcotics to high school students. It expressed frustration at what it felt was a lack of transparency from the board. The petition also asked the board to terminate the couple’s employment.

The Yakima County Sheriff’s Office has an investigation open into alleged inappropriate behavior by Johnny and Bertha Cerna. Lead investigator on the case Detective Sergio Reyna did not respond to multiple calls and emails requesting updated information on the case.

Yakima attorney Sarah Wixson conducted an investigation on behalf of the Toppenish School District. It is expected to be released this month.

The Washington Office of Superintendent of Public Instruction opened an investigation in early July for possible violations of the code of professional conduct, according to agency spokesperson Katy Payne. The agency does not have an estimate on when it will be finished.