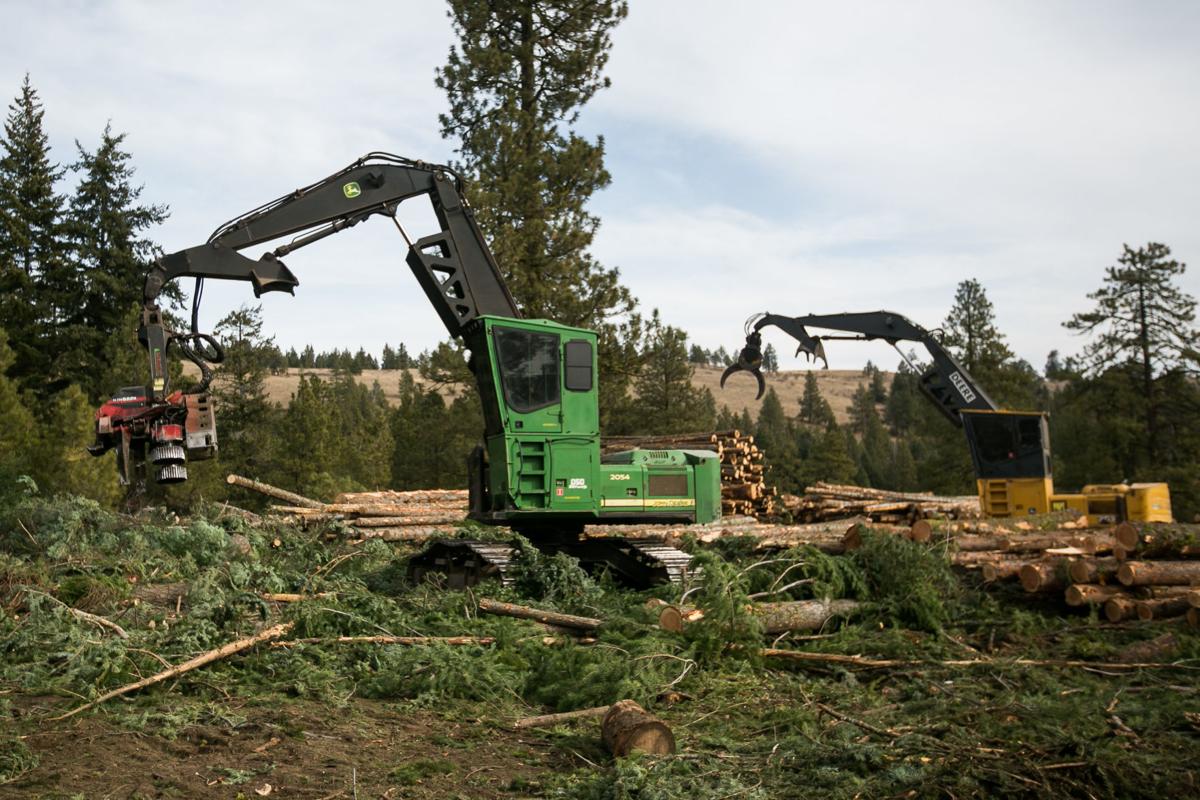 Loggers with the Washington State Department of Natural Resources process and load trimmed logs Friday at the Elk View Timber Sale near Naches. 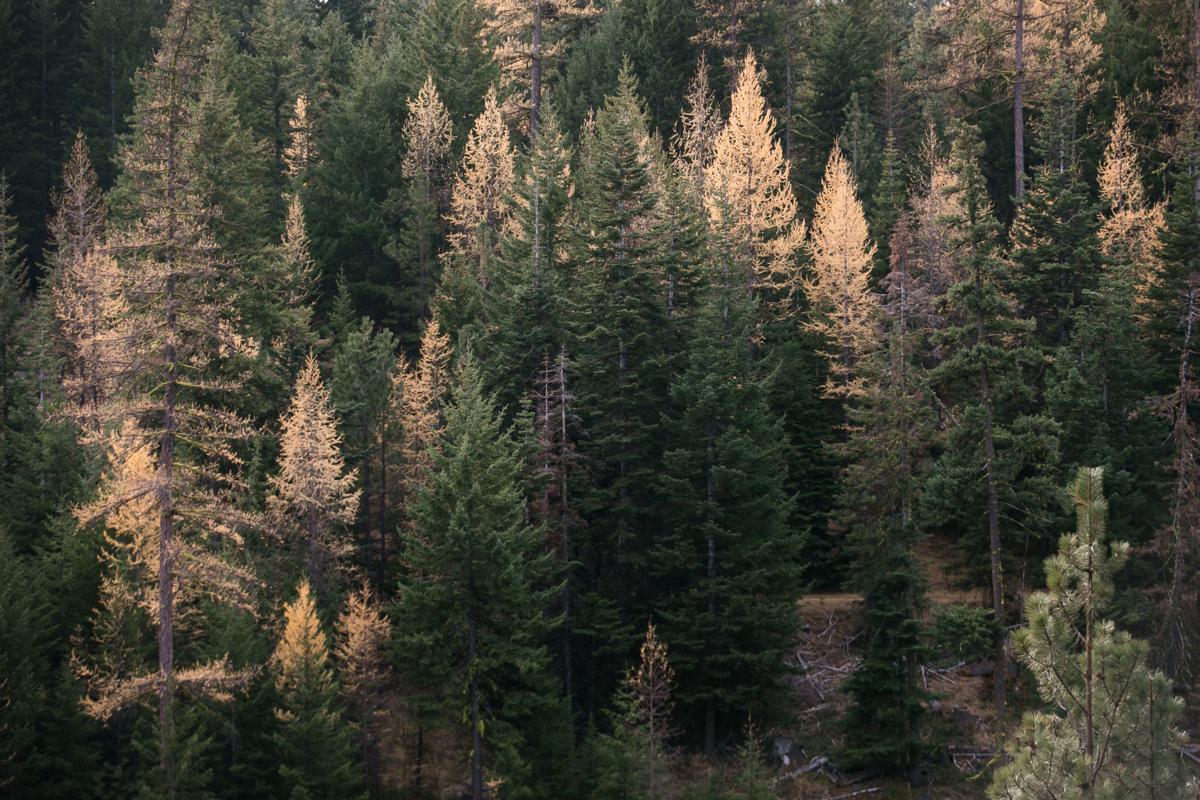 A section of trees shows damage Friday at the Elk View Timber Sale near Naches. 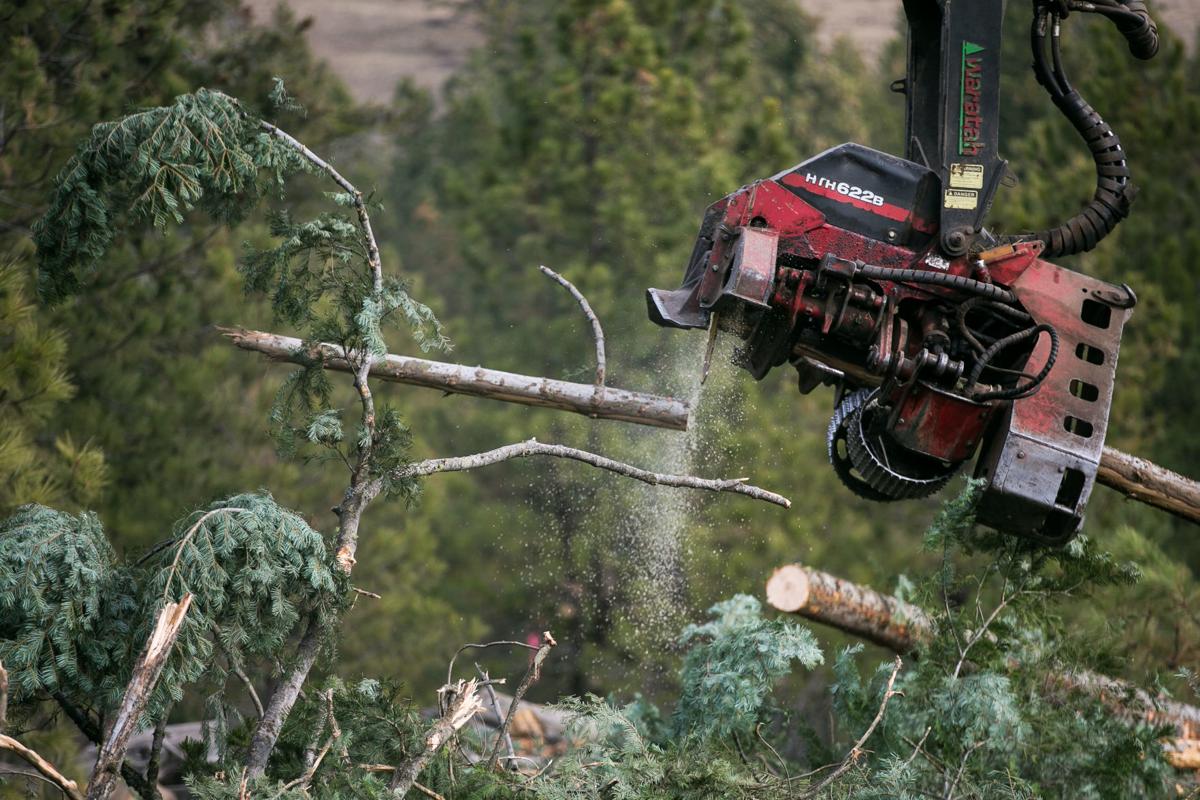 A processor saws a trimmed log at the Elk View Timber Sale Friday, Nov. 8, 2019, in Naches. 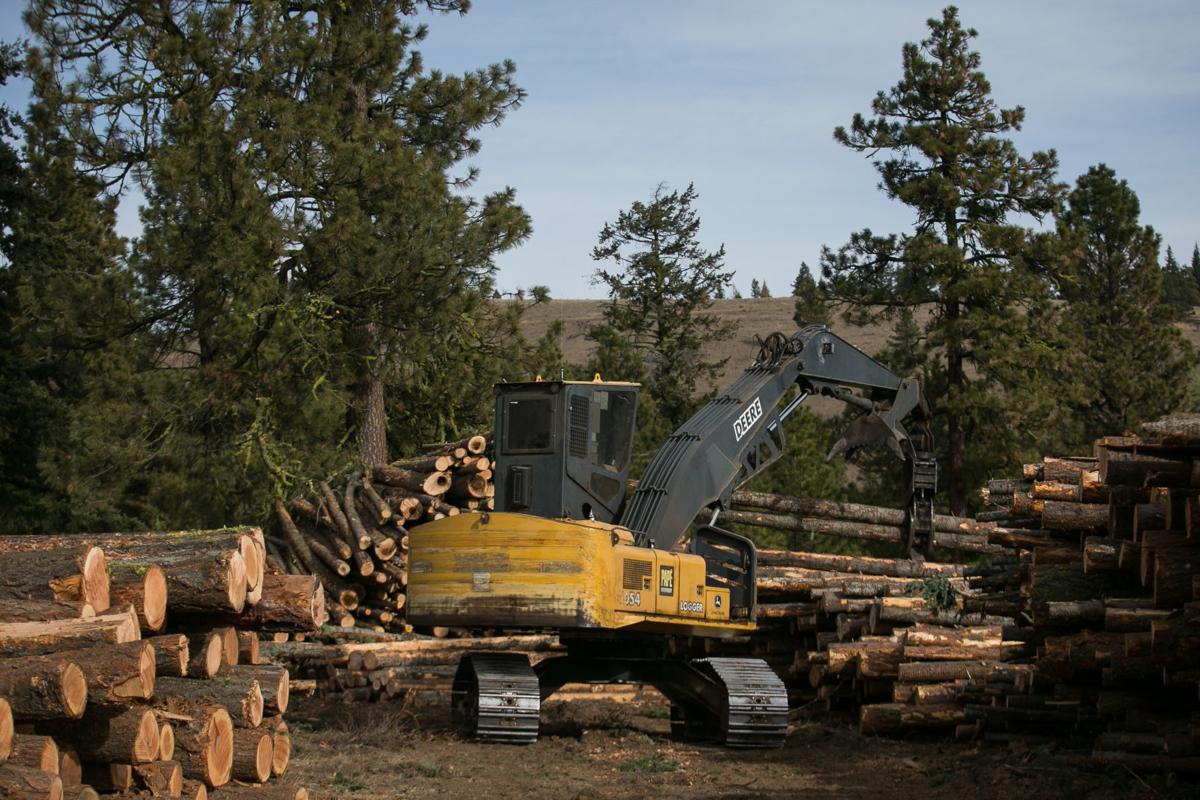 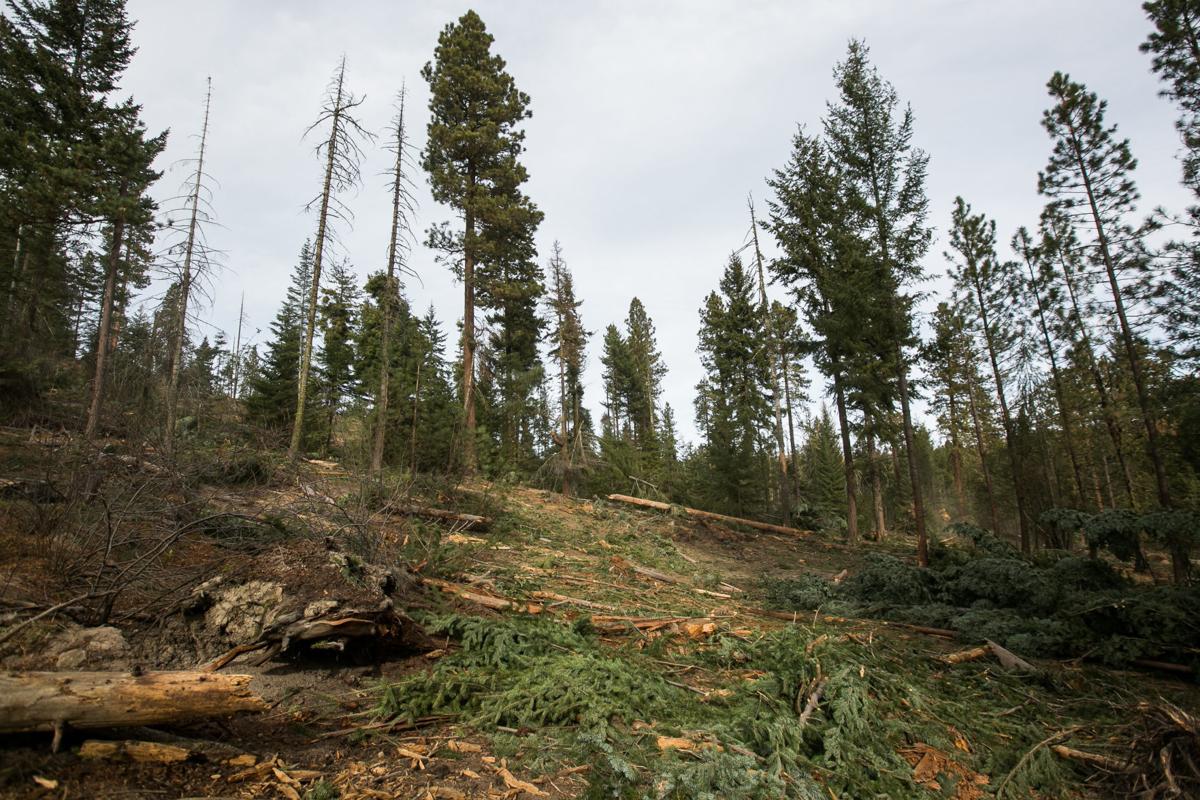 After logging operations, slash is left for collection at the Elk View Timber Sale Friday, Nov. 8, 2019, in Naches. 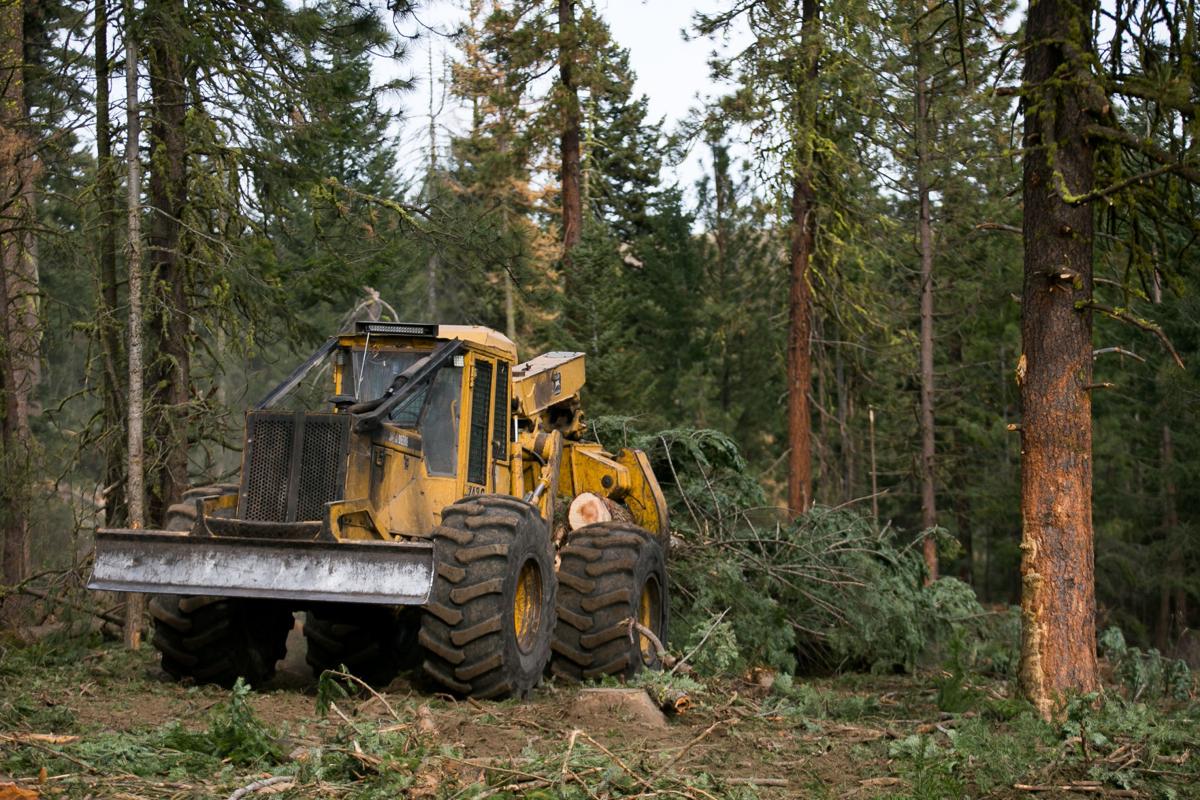 A skidder funnels slash through a section of the Elk View Timber Sale Friday, Nov. 8, 2019, in Naches. 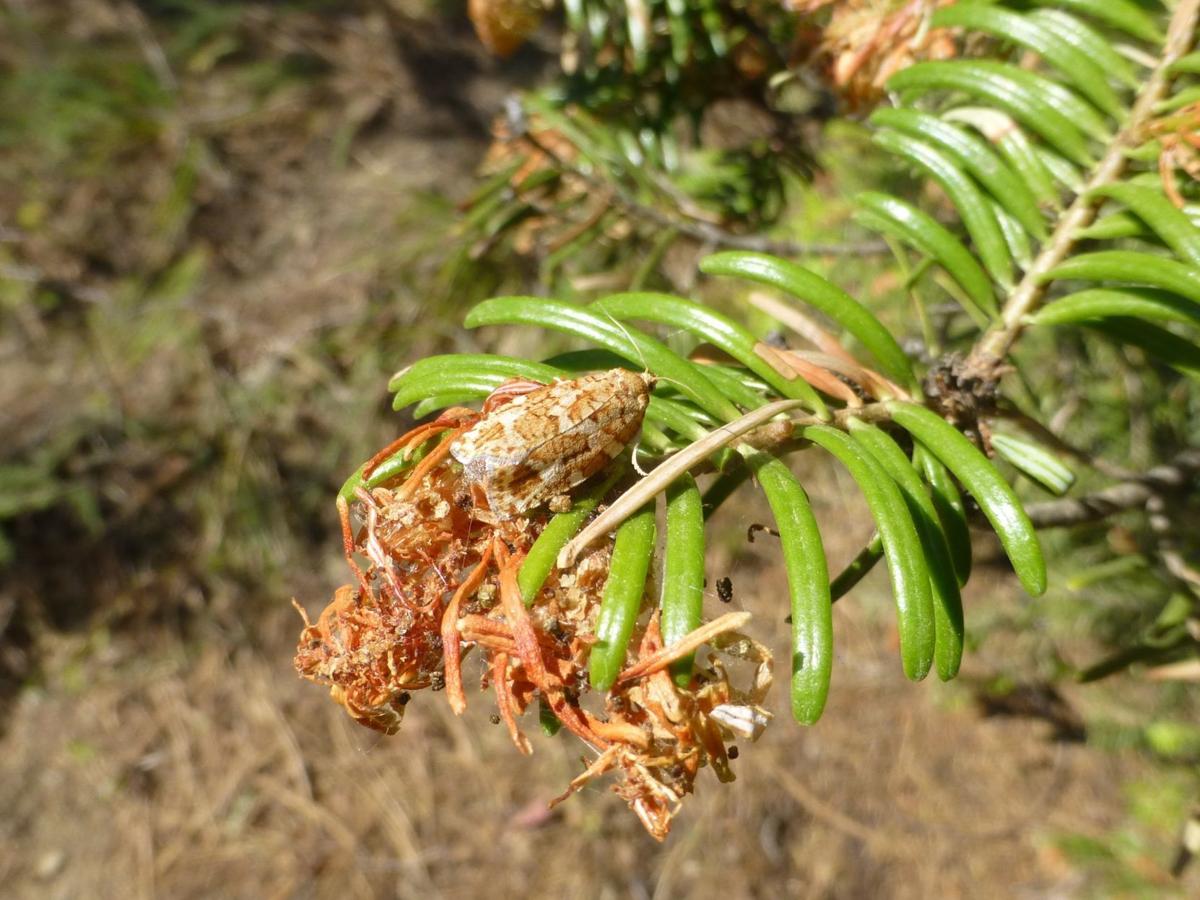 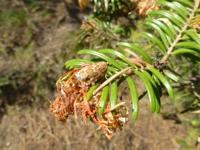 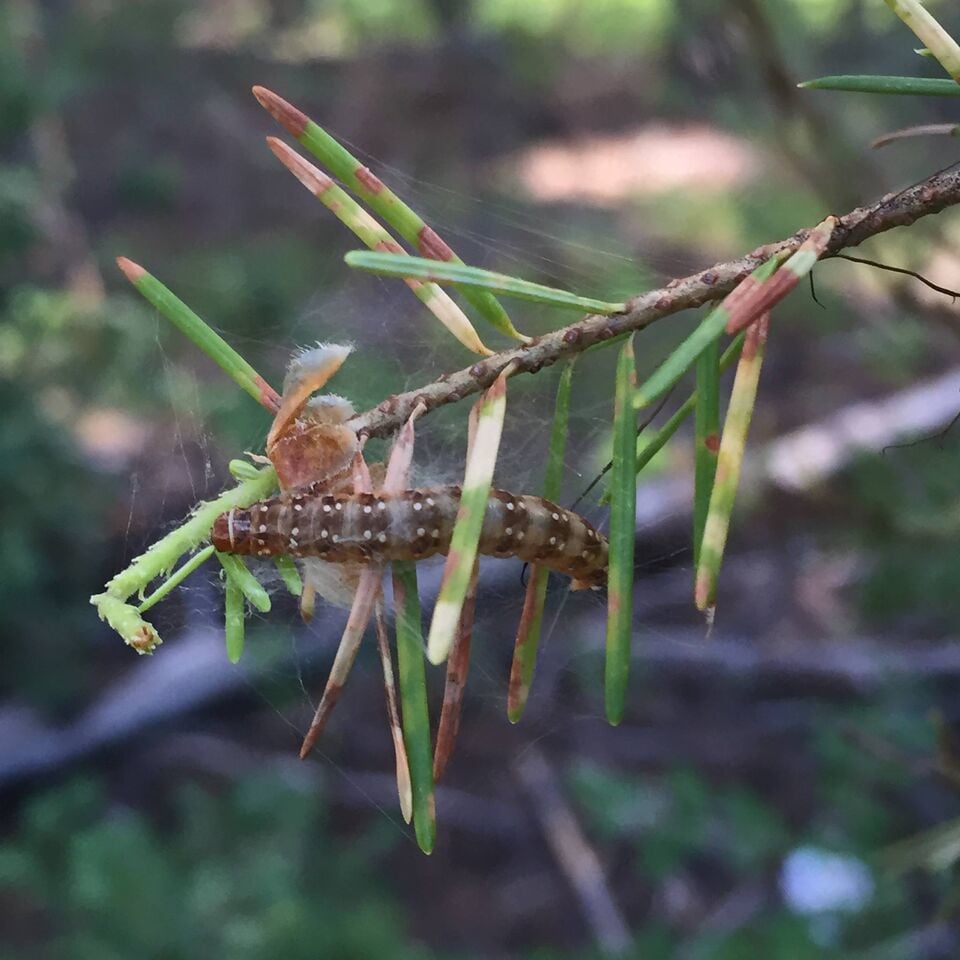 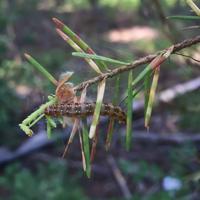 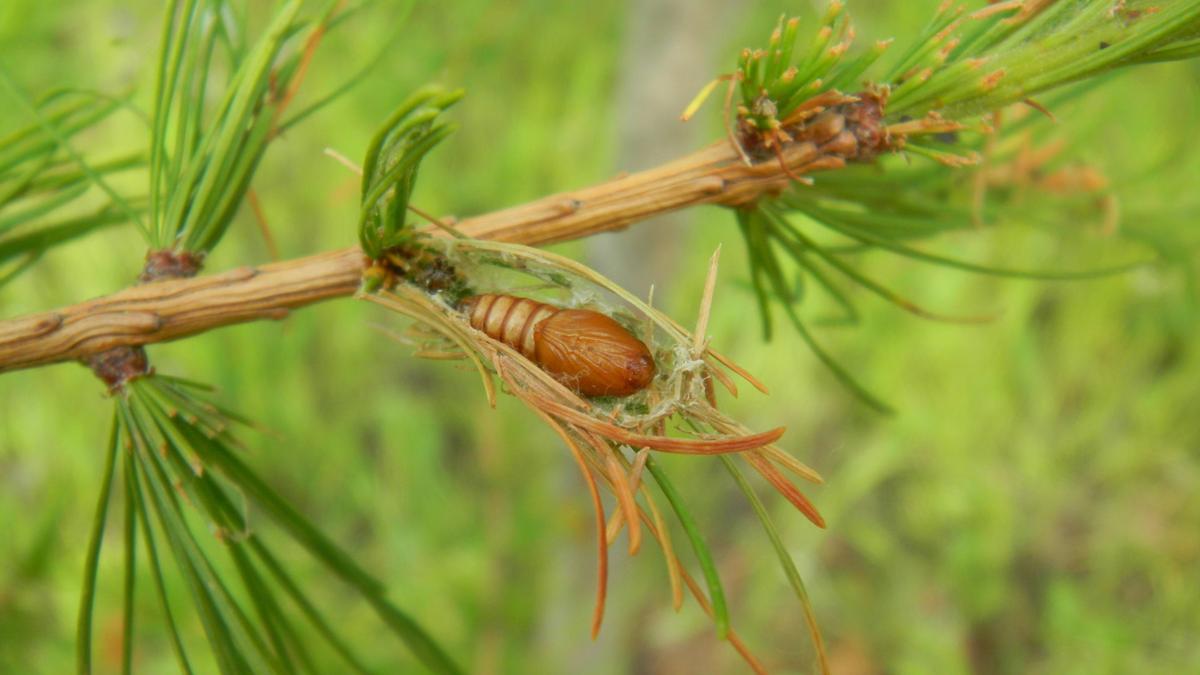 A western spruce budworm pupa is attached to a western larch. 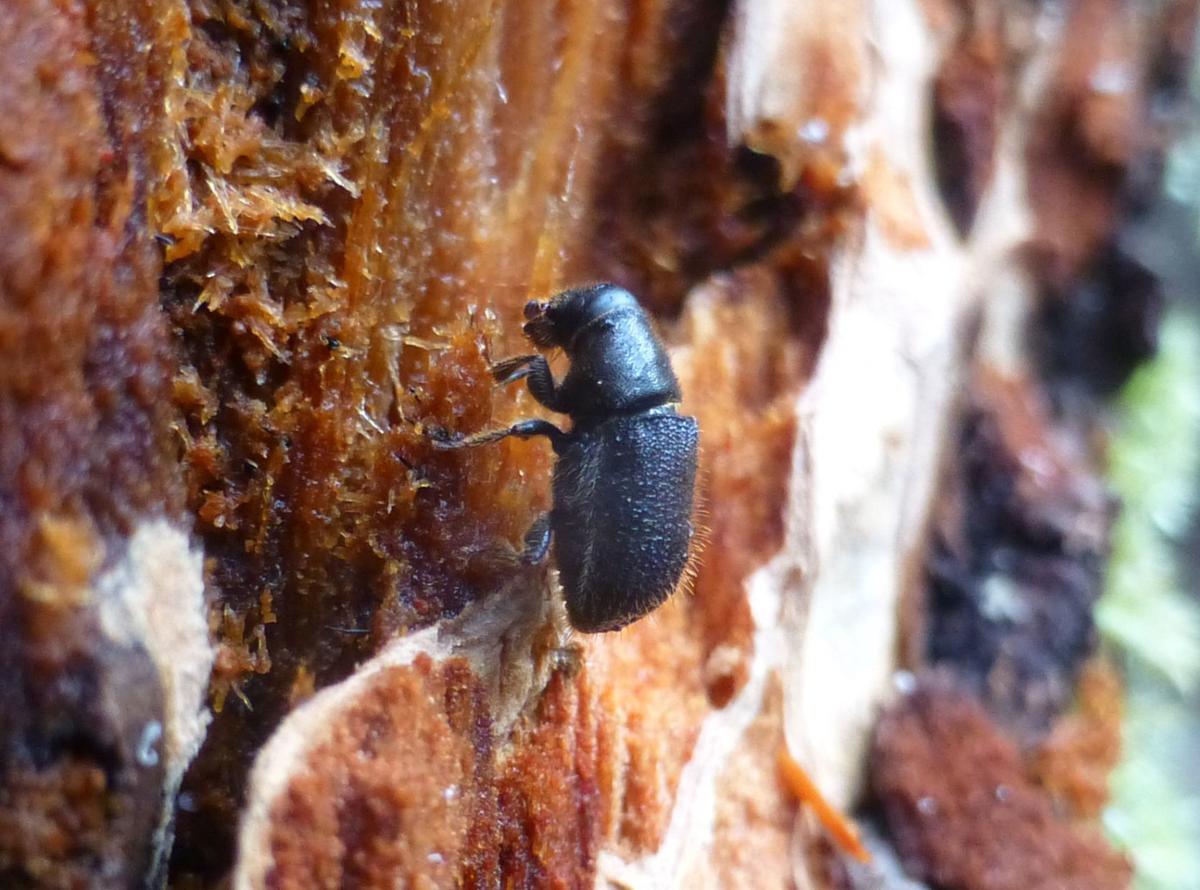 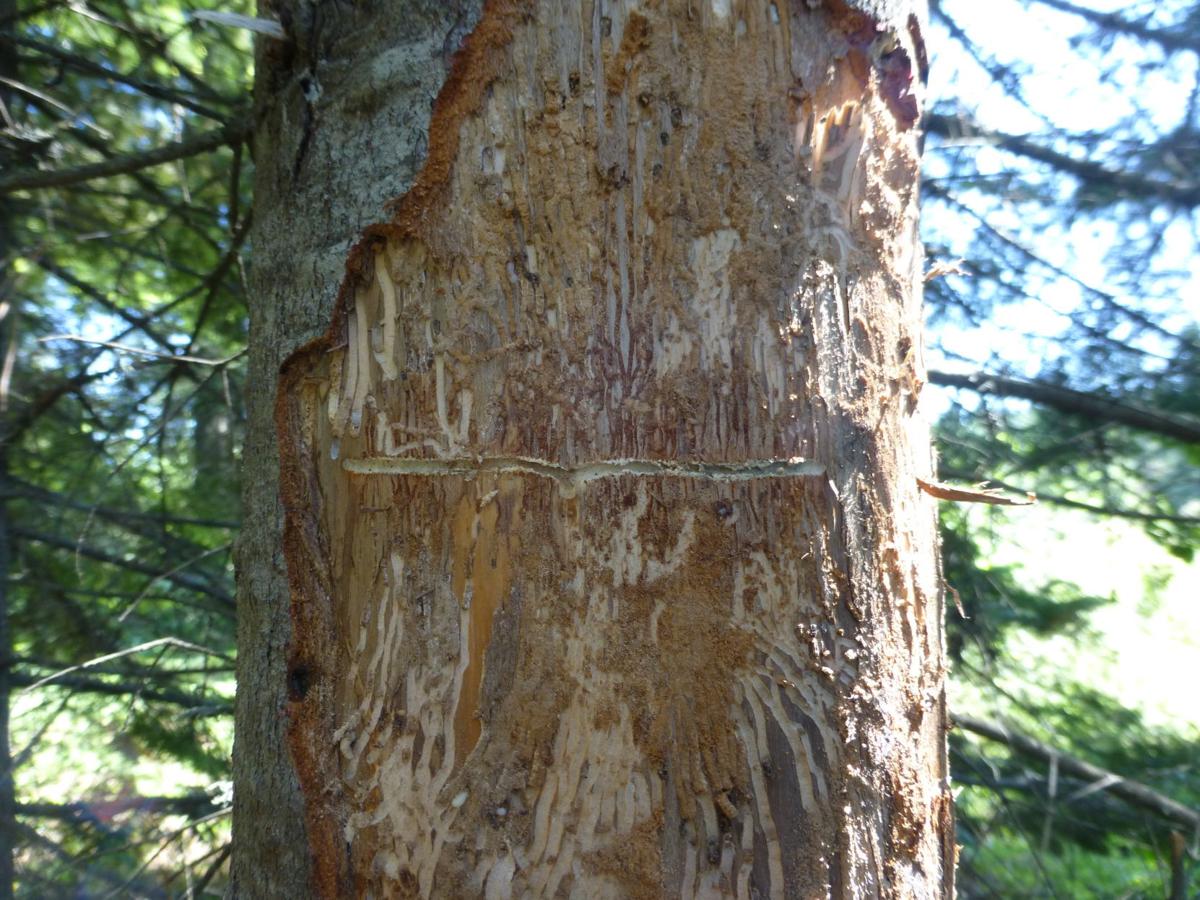 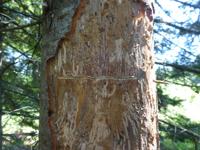 Damage in the sapwood of a grand fir caused by fir engraver bark beetles. 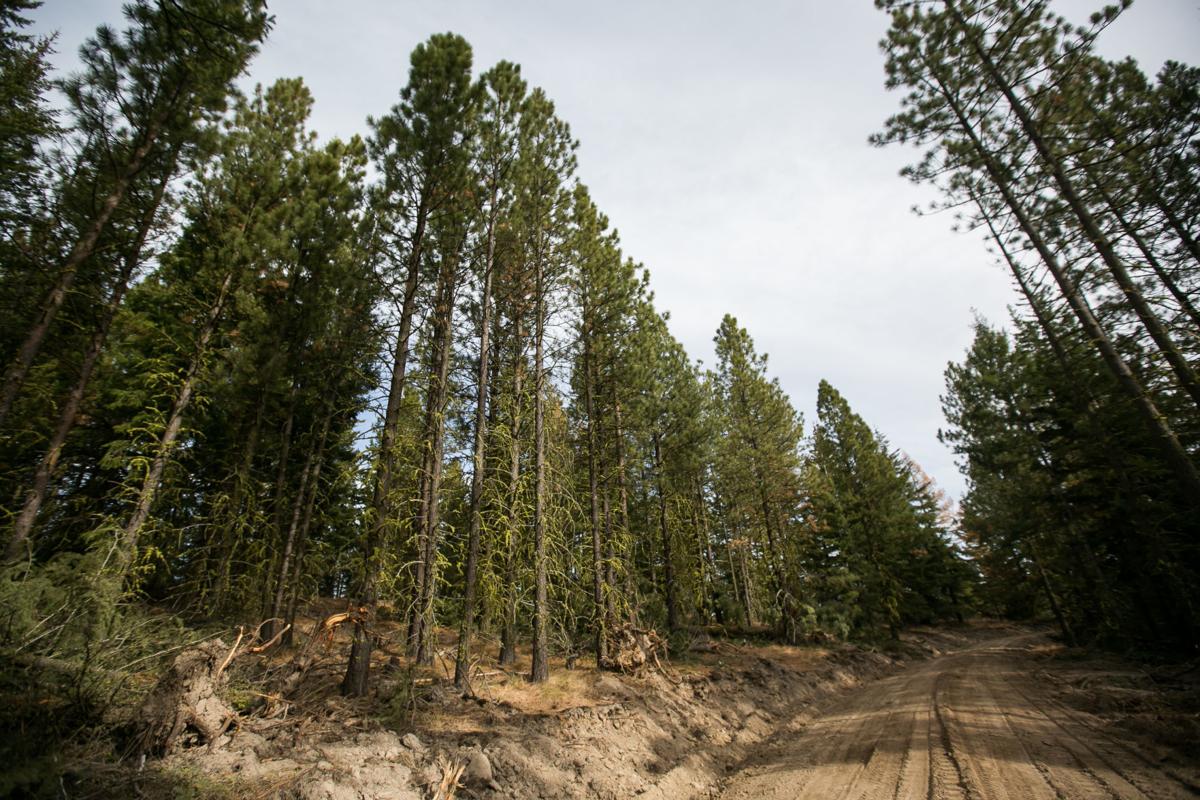 An overstocked section of trees at the Elk View Timber Sale Friday, Nov. 8, 2019, in Naches, Wash.

Loggers with the Washington State Department of Natural Resources process and load trimmed logs Friday at the Elk View Timber Sale near Naches.

A section of trees shows damage Friday at the Elk View Timber Sale near Naches.

A processor saws a trimmed log at the Elk View Timber Sale Friday, Nov. 8, 2019, in Naches.

After logging operations, slash is left for collection at the Elk View Timber Sale Friday, Nov. 8, 2019, in Naches.

A skidder funnels slash through a section of the Elk View Timber Sale Friday, Nov. 8, 2019, in Naches.

A western spruce budworm pupa is attached to a western larch.

Damage in the sapwood of a grand fir caused by fir engraver bark beetles.

An overstocked section of trees at the Elk View Timber Sale Friday, Nov. 8, 2019, in Naches, Wash.

On state-owned land in the Elk View timber sale, an area about 12 miles northwest of Naches, a cluster of pines stands together on the edge of a dirt road.

Their long branches intertwine, like clasped hands, a synergy that stretches to their crowns. To elk hunters or hikers who frequent the serpentine, gravel roads leading through the forest off State Route 410 and Nile Road, the densely packed trees might offer cover or a beautiful contrast to the swaths of meadow interspersed with the trees.

But to Chris Brandon and Brendan Cockrum, foresters with the Washington State Department of Natural Resources, the close-knit trees portend disaster.

Limited nutrients in the soil dispersed to the dense trees yield weaker adult trees that are more susceptible to insect infestation, disease and, ultimately, death. Trees also become more susceptible to “ladder” fires — wildfires that start on the ground, travel up a tree, then spread to that tree’s neighbors.

Brandon, who has bright eyes and a firm handshake, stopped his truck on the side of the road, kicking up dust, to better illustrate the problem.

“If some guy smokes a cigarette and throws it out the window, that has the potential to burn this entire clump,” he said. “We risk losing all of this.”

The department’s solution is to thin the forests, through prescribed burns or mechanical thinning, a process in which driver-directed machines cut down a certain number of trees per acre, strip them of branches, then pack the timber off to be sold.

“We want to do our best to make sure that we avoid those catastrophic wildfires that devastate the entire ecology,” Brandon said.

Cockrum, donning a hard hat and orange safety vest over his plaid flannel shirt, says mechanical thinning is preferred. A majority of the profit from the timber sales from the area’s felled trees goes to a trust devoted to schools, while the remainder supports continued timber operations. Thinning reduces wildfire risk while still allowing cover for the area’s wildlife.

Cockrum noted that tree death and birth are a natural cycle that have been thrown out of balance due to past lack of active management. Forest health specialists are trying to restore that natural balance, he said.

“A lot of people think logging and they think about clear-cutting, and that’s not what we’re doing,” Cockrum said. “We’re working toward a healthier forest.”

A few miles beyond the pit stop, logging is underway. A tractor-like machine called a skidder drags bundles of cut trees, felled by a machine aptly named a “feller buncher,” over to another giant machine, called a processor, which picks up trees and strips off their branches in a matter of seconds. Then another machine, called a sorter, picks up the trunks and arranges them in neat piles for later departure to mills on the western side of the state.

Brandon said forests on the state land that he works, though dense, don’t suffer much from defoliation, disease, or insect outbreaks given active management.

But a 2018 forest health report from the department’s Forest Health and Resiliency Division found large portions of other forested areas, particularly in Eastern and Central Washington, are unhealthy. The goal is to restore health to 1.25 million acres of forest in the next 20 years to reduce risks of wildfire, tree mortality, damage and disease.

Every year, forest health specialists conduct aerial surveys in the Pacific Northwest to evaluate the type and extent of forest damage from insects and disease. The surveys are a collaboration of the Washington Department of Natural Resources, the Oregon Department of Forestry, and the Forest Service Forest Health Protection staff.

Stevie Mathieu, spokeswoman for the state Department of Natural Resources, said that a century’s suppressing fires and lack of active management has created unnaturally dense forests in Eastern Washington, which makes trees more susceptible to insects, disease, the effects of climate change and wildfire.

“Longer fire seasons caused by our changing climate will only make the problem worse if we fail to take action and increase the resiliency of our forests and nearby communities,” Mathieu said.

Healthy forests, by contrast, contribute to clean air and water as well as to timber and outdoor recreation economies, she added.

Key culprits to forest mortality and disease include pine bark beetles, fir bark beetles, and western spruce budworm, Mathieu said. Many of the species killing trees are native and have not been a problem historically, and in fact, helped ecosystems by breaking down dead trees, she added.

But because forests are unhealthy, living trees are weaker and less likely to survive insect infestations, Mathieu said.

Cockrum and Brandon physically scout sections of forest marked for management. Deciding which trees to cut is a team effort, with forest health specialists considering the health of an individual tree, its proximity to other trees, species and other factors.

Cockrum said he prizes Ponderosa pines for their fire- and insect-resistance. Western larch, which drop their needles each fall, also are prized species. Douglas firs are less hardy, whereas grand firs are the most susceptible to fires and insect outbreaks, he said.

Forest staff are careful to retain biodiversity, however. A forest with only Ponderosa pine would be devastated by a pine beetle outbreak, Cockrum noted.

Forest staff use aerial information and the on-the-ground surveys to create a plan called a prescription. The Elk View timber sale area’s prescription requires that an average of 21 trees per acre remain following treatment. The timber sale area covers 740 acres.

Trees left in place will include healthy “legacy” trees, some of which are more than 200 years old, as well as some trees that have physical defects but provide desirable habitat for wildlife, including the state’s threatened spotted owls.

A statewide forest health technical advisory committee developed a 20-year plan to work with the highest risk forests in Central and Eastern Washington. Forests in the Ahtanum, Tieton and Manastash-Taneum areas are the plan’s top priorities.

“These areas have significantly unhealthy forests and other values at risk of harm from wildfires, such as communities, water sources or critical wildlife,” Mathieu said. “This is where the work is beginning.”

The Manastash-Taneum priority area is farthest along in the process, Mathieu said, with an evaluation showing the need to treat more than 16,500 acres with a combination of mechanical thinning and prescribed fire to help reduce wildfire risks, prevent insect and disease outbreaks, and sustain wildlife habitats. Forest specialists also hope to improve the dispersal of the northern spotted owl, classified as a threatened species since 1990, to meet the department’s habitat conservation requirements.

She encouraged those who own forestland to learn more about the department’s cost-share program, through which landowners with more than 2 acres of forestland may qualify for technical and financial assistance to conduct forest health treatments and fuel reductions.

Mathieu said community members can also contribute by becoming firewise, safeguarding their homes with non-combustible or fire-resistant materials and creating low-vegetation defensible space around their homes to protect their lands from future wildfires.

Approximately 469,000 of Washington state’s 22 million acres of forest lands suffer some form of tree mortality or defoliation diseases. Among them:

The Naches Ranger District, part of the Okanogan-Wenatchee National Forest, spans 518,000 acres near Naches to the Cascades in the William O. …