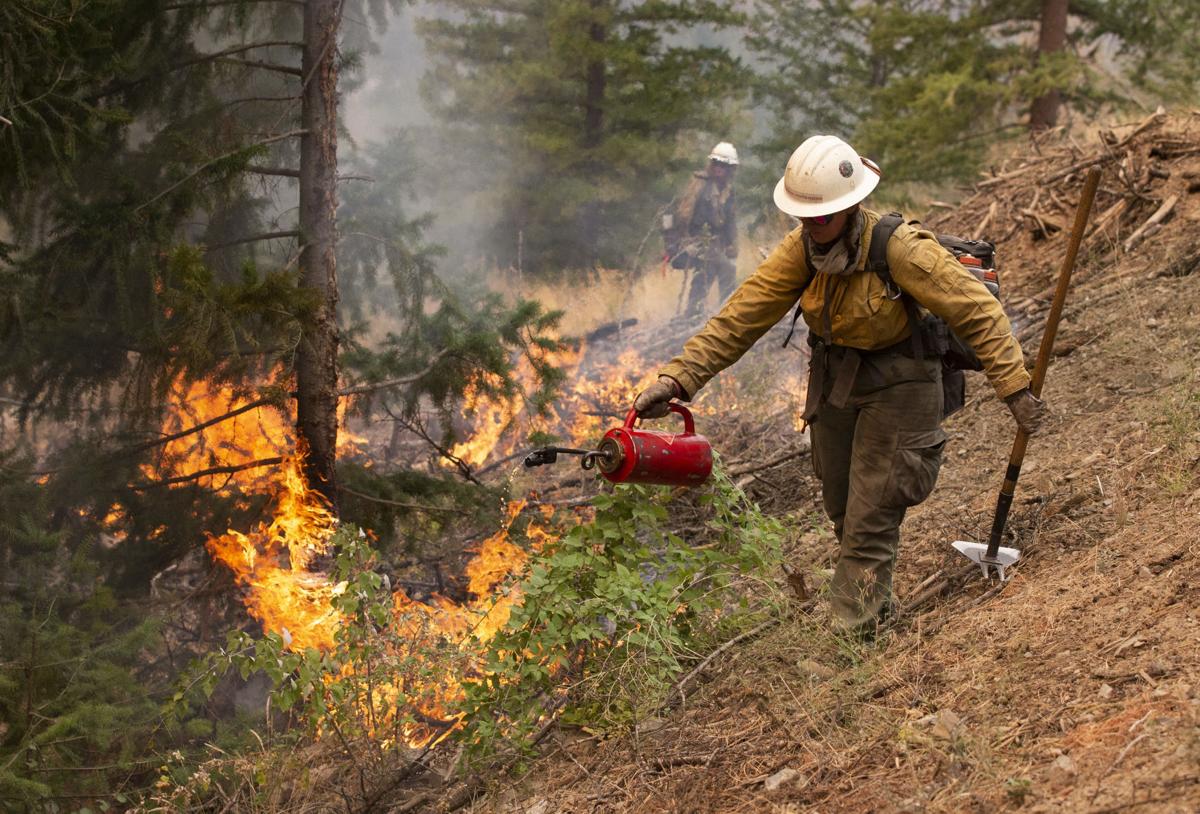 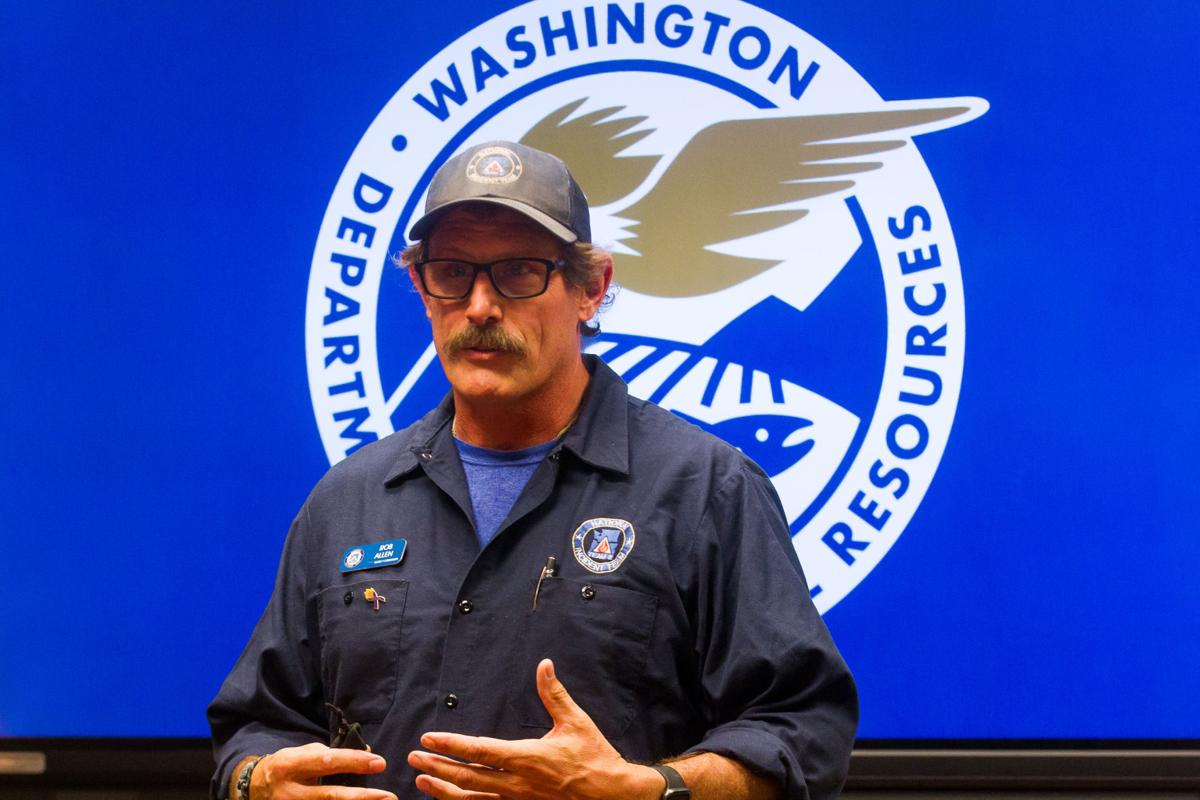 The fire 18 miles northwest of Naches was started by lightning Aug. 3 and has burned nearly 93,000 acres, or 132 square miles.

Allen said it looks like the fire caused a lot of damage on the map, but fly-by videos show that not all of the forest has been destroyed.

“A lot of that country, it’s just got a good understory burn, much like we would have tried to (do) if we were burning it in a prescribed fire area,” he said.

Allen said that would be beneficial in the future if there are more fires.

Forest and fire experts are calling for wildfire prevention tactics like fuel treatments and prescribed burns to be prioritized as fire seasons become more severe. The off-season effort is worth it in the long term to reduce the impact of fires — like Schneider Springs — that burn in the heart of fire season, experts said.

Prescribed fire is the planned use of fire for specific objectives, Nature Conservancy forest restoration and fire director Reese Lolley said. Fire is used to improve ecosystem health, reduce risk for communities and diminish the intensity of future wildfires.

There are several federal lands in Washington where prescribed burns are either planned or already completed. Four of these areas, which total 25,945 acres, are on the same land as or in the vicinity of the Schneider Springs Fire.

Those four units, named Canteen, Dry Ridge, Angel and Kaboom, were not burned in the spring, but treatments have been used there over the last 10-15 years, Wilkins said. They were each mechanically treated, she said. The process includes thinning trees, pruning lower branches or piling brush.

Wilkins said conditions weren’t favorable for burning. If the fuels are too wet or too dry, or if weather is too hot or too windy, prescribed burns can’t happen.

“Anytime we’re in the right kind of weather and conditions, it’s a kind of constant monitoring to find that window where we meet the right objectives,” Wilkins said.

Allen said the treatments used in the area gave crews places to safely stand and hold the fire. The horseshoe-shaped indent on the southern edge is where the fire ran into treatments completed by the Forest Service, the Department of Natural Resources and the Yakama Nation, Allen said.

There had also been treatments along Bethel Ridge and around the communication tower, Allen said. Those treatments helped contain spot fires that came from firing operations, he said.

“Just the fact that everything has been cleaned out is helpful for us,” Allen said.

Weather conditions and high fire activity have led to an unprecedented fire season in the West.

More than 98% of areas in western states are experiencing drought conditions, according to the U.S. drought monitor. As of Aug. 24, about 60% of those areas are seeing extreme or exceptional drought. The state Ecology Department declared a drought emergency July 14 in Washington.

Western states saw high temperatures this summer, and the Pacific Northwest had record-breaking heat waves in June and July.

The U.S. has been in a national wildfire preparedness Level 5 since July 14. Based on burning conditions, fire activity and resource availability. Level 5 is the most serious. Several geographic areas are experiencing major incidents that have the potential to exhaust all fire resources.

In early August, the U.S. Forest Service reported 70 fires burning across the country and 22,000 personnel responding. Roughly 1,700 fires have burned in Washington this season, Commissioner of Public Lands Hilary Franz said during a Thursday news conference in Yakima.

Because of these conditions, state and national restrictions affect burning options in Washington.

U.S. Forest Service Chief Randy Moore temporarily tightened restrictions on the use of prescribed fire on federal lands Aug. 2. Until further notice, prescribed burns will only be considered in geographic areas at or below a national preparedness Level 2.

Prescribed burns will also require approval of the regional forester.

Any future prescribed burns would have to meet the conditions laid out by Moore.

There are also burn bans in place across Washington state.

The DNR banned outdoor burning, the use of charcoal briquettes and prescribed fire on state-owned lands from July 2 through Sept. 30.

A burn ban on the Yakama Reservation began July 30.

Prescribed fire cannot be used while these bans are in place.

Fire is a natural part of forests in Washington, but humans have taken fire out of those forests for nearly a century, fire ecologist Susan Prichard said. Thinning and prescribed burn programs are intended to make the forests more resilient after wildfires.

“It’s not only a good way to clean out the understory and reduce the fuels, but it’s also really important for fire adapted plants and animals,” Prichard said.

The University of Washington ecologist compared prescribed fire to a doctor’s prescription for fire-prone areas: It is needed, but it is only used when the conditions are right. The burns are usually completed outside of fire season, in the spring or late fall.

“It will only be implemented under relatively low wind and under reasonable fuel moistures so that the fire that happens probably won’t get out of control,” Prichard said.

The Nature Conservancy forest restoration and fire director Reese Lolley said the U.S. Forest Service successfully suppressed fire throughout the 20th century, but many ecosystems became more flammable because of it.

“Suppression (is) unable to manage the job alone,” Lolley said.

Proactive tactics are needed outside of fire season to support the use of suppression during active fire season, said Lolley, who is also the treasurer of the Washington Prescribed Fire Council.

“It’s important, as were moving into longer fire seasons in a warming climate, that we are really looking at how we proactively use fire to reduce the risk to communities during wildfire season,” Lolley said.

It gives fire suppression a greater chance of success and provides more options for stopping wildfires in extreme weather conditions, he said.

“While there’s historically been high levels of support for fire suppression and resources, which are truly needed, there hasn’t been … near that support in active management and the use of prescribed fire that is needed,” Lolley said.

Franz said forest health and prevention work was key to helping limit the spread of the Schneider Springs Fire. The more fuel treatments there are on federal, state, private and tribal lands, the smaller the fires will be, she said.

“We need to do a far more amount of work on that landscape,” Franz said.

House Bill 1168 will help do that, she said. The bill, signed into law May 13 by Gov. Jay Inslee, devotes more funds to long-term forest health and the reduction of wildfire dangers.

With the legislation, the state will have access to more air resources and can hire 100 more firefighters trained in prescribed fire and other prevention tactics, Franz said. They will also fight fires.

Hiring and training will be start this fall, she said.

Prescribed burning can be done on state lands once burn bans are lifted and severe fire-weather conditions subside. This transition typically occurs in September or October, although it may come later this year. The potential for extreme fire activity is predicted to be above normal into October, according to the Forest Service.

Fall fire use on federal lands in Washington will hinge on national weather conditions. Any burning on Forest Service lands will have to abide by the agency’s temporary restrictions.

Options may still be limited for prescribed burning this fall, but fire officials said they will try to use the time they have.

Franz said the goal is to get more prescribed fire programs going in the state, and to burn faster and smoother. But when the fire season is longer, hotter and drier, like it is this year, the window for prescribed burning in the fall is very narrow, the commissioner said.

Burning must be approved by multiple agencies, Franz said. For example, permits are required for burning that will affect the air quality. Prescribed fire extends the smoky conditions communities have already been experiencing, she said.

“People here are tired of the smoke,” Franz said.

Firefighters are also ready for a break after an intense fire season, incident commander Allen said.

“Those same folks who will be doing the prescribed fire work for us are fighting fires right now,” he said.

At the end of the season, those workers want to go home and spend time with their families. Even as agencies lose some of their workforce, Allen said there are still plans to use prescribed fire.

He said pile burning will be the priority in the Okanogan-Wenatchee National Forest. It is easier to get a smoke permit for burning piles, and the projects require fewer firefighters, Allen said. Pile burning can also continue after it has snowed.

“We do still have an aggressive prescribed fire plan for this fall, and it will pick up again in the spring,” he said. “Whether or not we have the folks when it gets to that point here this fall to implement the plan, I don’t know yet.”

Lolley, with the Nature Conservancy, said the organization will work with its partners to identify how to safely use planned fire this fall. One area they have plans to burn is near Roslyn and Cle Elum in central Washington, he said.

Wilkins, with the Forest Service, said some planned treatments in the Okanogan-Wenatchee National Forest have been impacted by fires. The Forest Service will need to reevaluate those areas before implementing the plans for prescribed burns this fall.

Bumping River Road was elevated to a Level 3 “go now” evacuation on Tuesday night because of spotting from the Schneider Springs Fire.