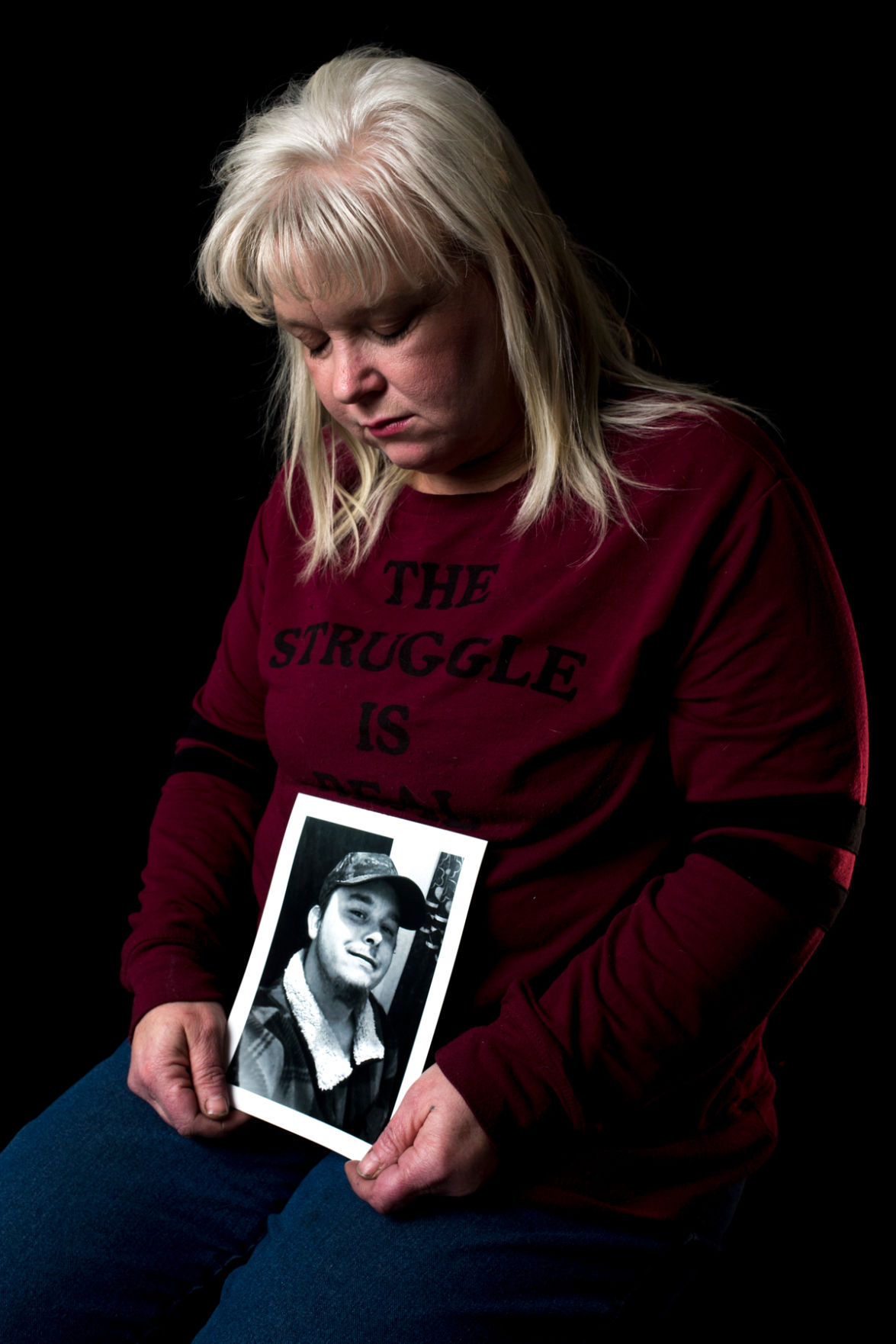 Michelle Joe of Yakima holds a photo of her son, Cody Turner, while posing for a portrait in Yakima, Wash. on Saturday, Jan. 14, 2017. Turner, 24, has been missing since July 2015, and his mother has been leading efforts to keep his disappearance in the public eye. (JAKE PARRISH/Yakima Herald-Republic)

Michelle Joe of Yakima holds a photo of her son, Cody Turner, while posing for a portrait in Yakima, Wash. on Saturday, Jan. 14, 2017. Turner, 24, has been missing since July 2015, and his mother has been leading efforts to keep his disappearance in the public eye. (JAKE PARRISH/Yakima Herald-Republic)

But she doesn’t know, and that’s the part that hurts.

In July, Cody Turner will have been missing for two years. That same month in 2015, another Yakima man, Chad Stotz-Gomez, also disappeared.

Police say they have nothing concrete to connect the cases. Both men are still considered missing.

Joe knows she may never see Cody again. “But the mom in me — I won’t quit looking,” she said.

“We would like to bring him home,” Naomi Reedy said.

Investigators say most missing-person cases resolve themselves within days or weeks.

For example, the Yakima County Sheriff’s Office — which has been involved in the Stotz-Gomez case because of a possibly related investigation of a shooting outside Selah — has only five active missing-person cases between 2013 and 2016.

Recent figures were not immediately available from Yakima police on Tuesday. However, a database maintained by the Washington Association of Sheriffs and Police Chiefs shows 67 missing people reported by Yakima police over an extended period, though some are duplicates due to aliases. For the sheriff’s office, 38 cases are listed.

However, neither Turner nor Stotz-Gomez is listed in that database; the reason could not immediately be determined Tuesday.

Police are continuing to work the cases, though they say they need help from the public.

“We would love some credible leads. Even if it’s not substantiated at the time, we can look into it,” said Lt. Stace McKinley of the Union Gap Police Department.

Police said he was a transient and Level 1 sex offender.

He was known to live in Yakima-area river camps popular with the homeless, though relatives said he maintained regular contact with his mother and other family members.

Turner, 24, was last seen July 26, 2015, when he left his grandmother’s Yakima home, where he lived with her and his father.

Relatives acknowledged that he was likely using methamphetamine and hanging out on the street with others who did the same.

Regardless, their families describe the two men as caring and helpful people.

Cody was the first of Joe’s four children to receive a high school diploma. After losing a job, he seemed to falter in life and started using methamphetamine over the year or so before his disappearance, his mother said.

Facebook photos show a bearded Stotz-Gomez proudly kneeling by a truck. In another photo, he is broadly smiling.

“He was the kind of person who would help anybody,” his sister said.

Thinking of the missing men on a daily basis is difficult for the families.

“It makes it harder to go on day by day,” Reedy said.

While it’s unclear what happened to Turner or Stotz-Gomez, the length of their disappearance raises the prospect that foul play may be involved.

Russell said such cases can be difficult to solve due to a lack of cooperative witnesses or physical evidence.

“The challenge is actually the same as it is with a regular homicide investigation in the sense that we don’t have people coming forward with critical information,” he said.

Detectives have spent weeks worth of man-hours tracking down numerous leads, in many cases only to find that the tip was not accurate, Russell said.

Many rumors have surfaced about how either man might have died.

“We’ve heard so many stories, it’s hard to know which direction to go,” Joe said.

Was Cody forced to watch Chad die? Was Chad’s death somehow connected to a woman being injured in a shooting at Harlan Landing outside Selah the same month he vanished? Might Cody’s head have floated away in a river?

These are the scenarios a parent, sister or grandparent must deal with when wondering late at night what happened to their loved one.

Authorities say they haven’t uncovered any firm information indicating what might have happened to Turner or Stotz-Gomez.

Joe said she has heard that Turner and Stotz-Gomez might have been seen together sometime in July, but there’s been nothing to confirm that.

Russell said detectives investigated reports that Stotz-Gomez was connected to the Harlan Landing shooting, but nothing surfaced to indicate his whereabouts, nor any ties to the Turner case.

Russell said detectives found evidence of Stotz-Gomez’s DNA at the Harlan Landing shooting scene, which was reported on the same day he went missing. The shooting left a 36-year-old woman with wounds to the leg and arm. However, Russell said, she has been largely uncooperative, just as other witnesses were in the hours after the shooting.

In another twist, Russell said the pool of people tied to the shooting case are the same people connected to the November 2015 shooting death of Yakima resident Norma Emmerson. Emmerson was a 54-year-old mother of two adult children who was found shot in the head outside East Selah.

Authorities indicated in court documents that Emmerson was reportedly killed because she had information about a homicide committed by an ex-boyfriend. The suspect in that case, Raven Cutler, pleaded guilty to second-degree murder and was sentenced to 30 years in prison.

Joe said Cutler, an acquaintance of hers, messaged her on Facebook to say she had seen Turner and Stotz-Gomez together in downtown Yakima. Joe and Stotz-Gomez met several years ago while living in the same trailer park. Joe said Cody would have met Stotz-Gomez during that time, but she’s not sure whether they would have crossed paths since then.

The case has taken its toll on Joe, who now wonders whether everyone she sees is a suspect.

She sometimes dwells on what she could have done differently in raising her children, acknowledging her own history of drug use. She reflects on her last phone call with Cody, regretting that she hung up on him during an emotional conversation.

She manages a Facebook page about her son’s disappearance, trying to keep attention on the investigation. Her focus on finding Cody has changed her life.

The Stotz family also has kept a Facebook page regarding that case.

Union Gap police took a missing-persons report on Stotz-Gomez because he had once lived there, but Lt. McKinley said there’s no firm information on where he might have disappeared from.

Police issued a bulletin in Washington and Oregon, flagging his name in case law enforcement elsewhere encounters him, McKinley said.

In order to get a break in either case, police need someone to step forward with credible details of what might have happened to the men or where they might have gone.

“People know; they are just not saying anything,” Reedy said, noting that her brother was a talkative person who would have connected with others around him.

Joe acknowledges  that Cody might have committed suicide or decided to leave town. But those scenarios seem unlikely considering that both Turner and Stotz-Gomez kept in regular contact with relatives.

Sue Lenox, Turner’s grandmother, said Cody would often leave home at night but faithfully return in the morning. When he didn’t show up on the day he disappeared, she knew something was wrong.

Lenox feels Turner is dead, but how and why remain unknown, except for whatever suggestion arises from the latest rumor.

“Until I know for sure, I believe everything,” Lenox said.

■ Crime Stoppers of Yakima County offers rewards for tips leading to arrests of felony suspects. Tips may be reported anonymously at 800-248-9980 or online at www.crimestoppersyakco.org.