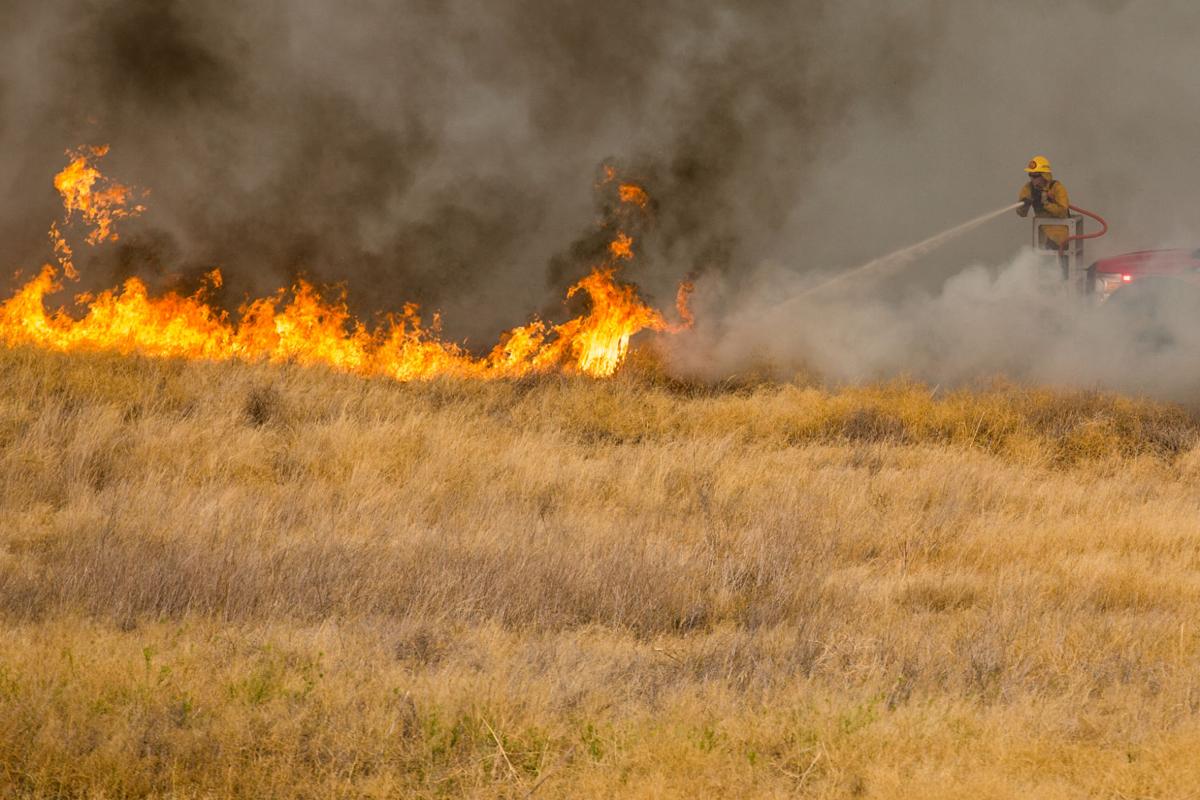 Scenes from a three-alarm brush fire east of Moxee, Wash. on Monday, July 30, 2018. Between 60 and 70 firefighters responded to the scene, as well as a tanker and spotter plane, a helicopter, and a bulldozer crew. As of 6:20 p.m., the fire was about 50 percent contained and an estimated 1,500 acres in size, burning mostly low-lying brush. The cause of the fire is under investigation. 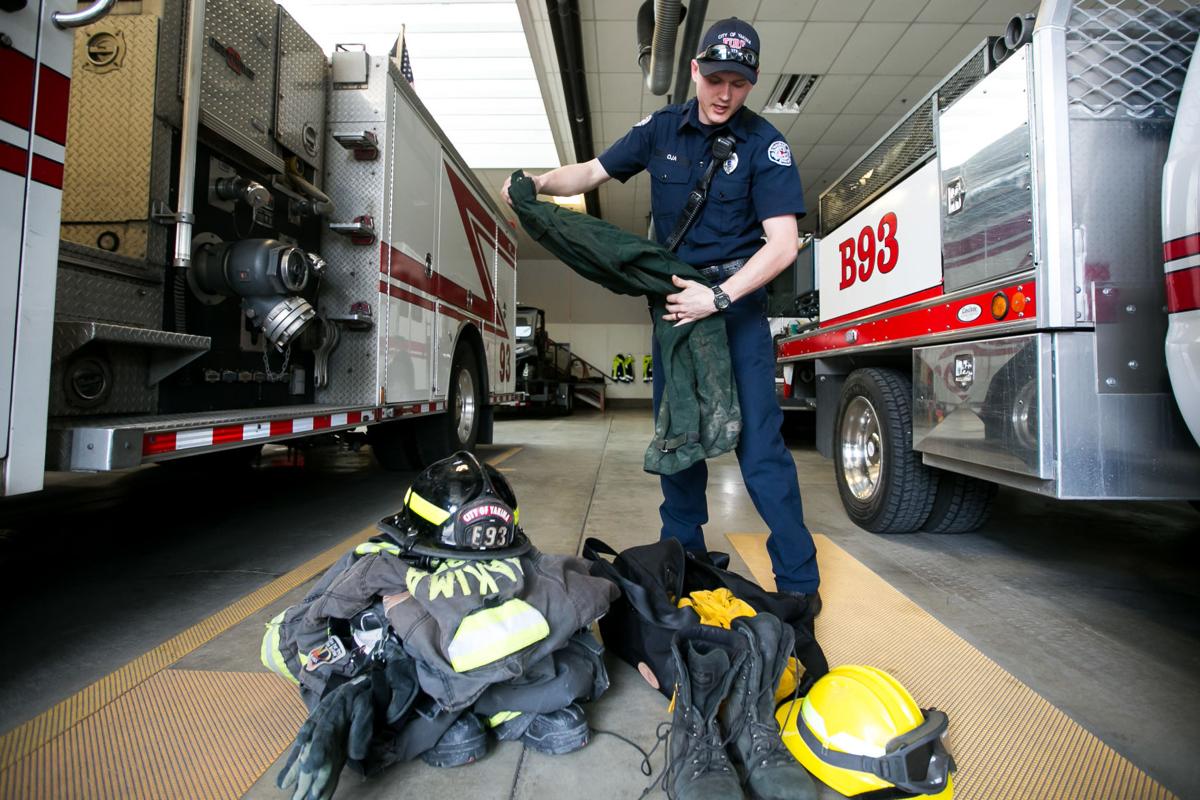 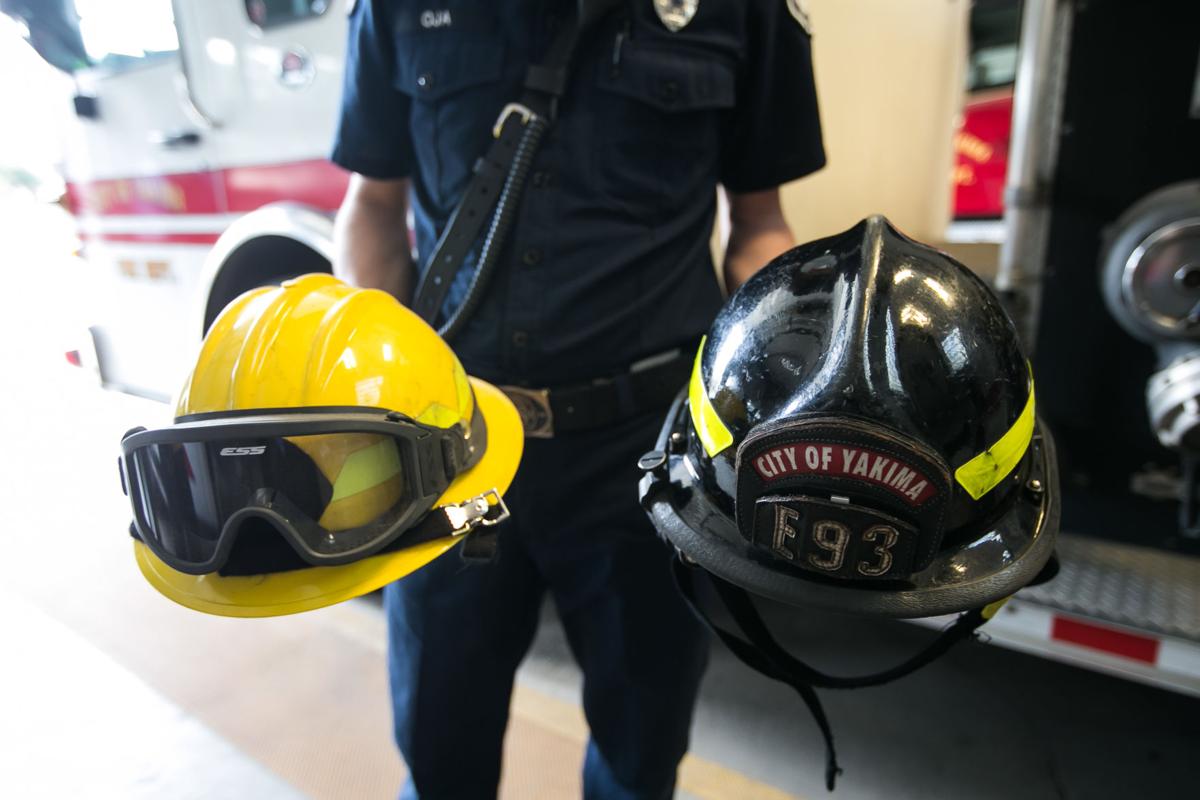 David Oja explains the difference between a wildland, left, and a structural firefighting helmet on Monday, April 1, 2019, at 511 North 40th Avenue in Yakima. 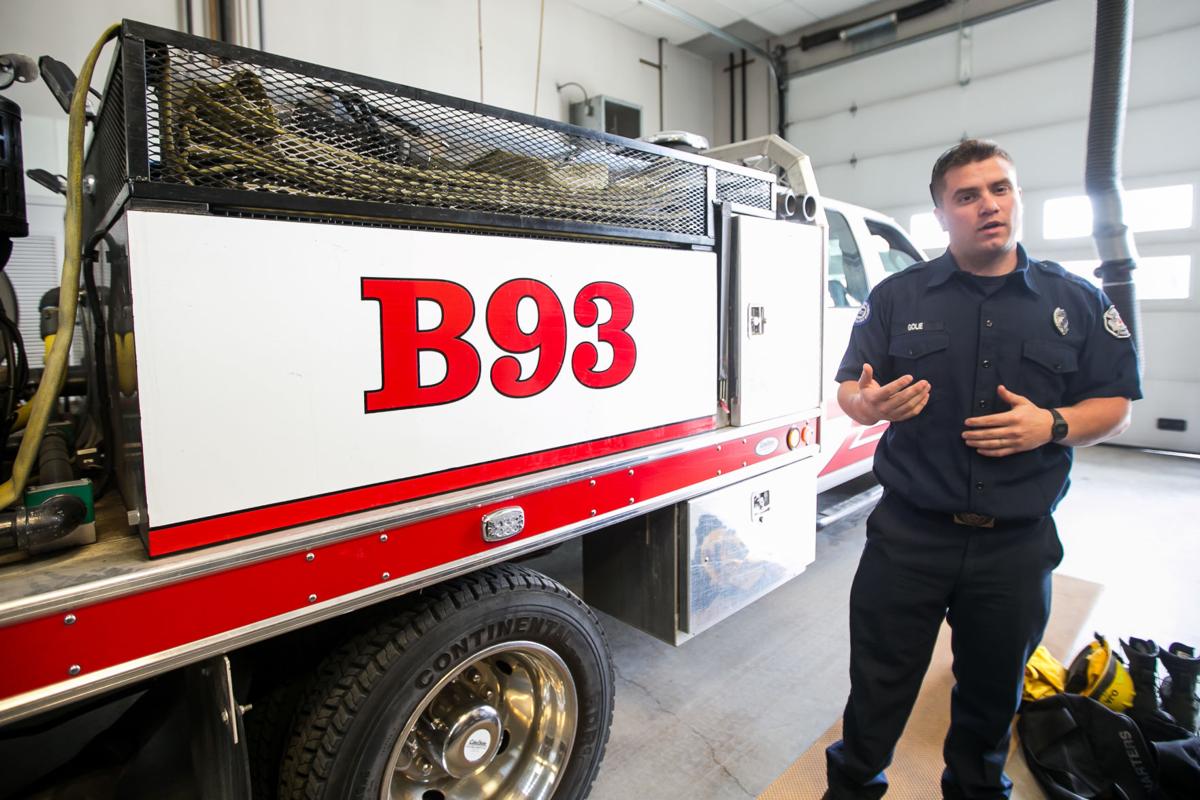 Patrick Golie explains the difference between a firefighting brush truck and an engine truck on Monday, April 1, 2019, at 511 North 40th Avenue in Yakima. A brush truck provides the ability to cross all types of terrain. 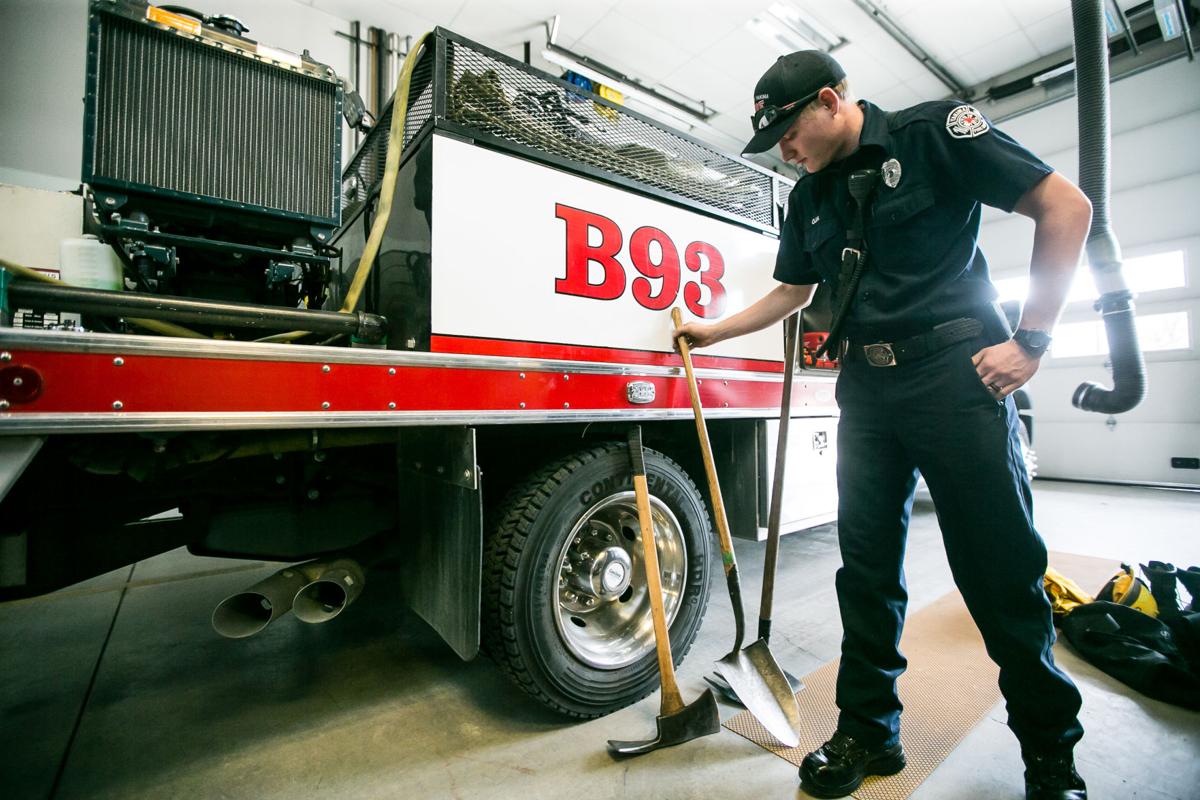 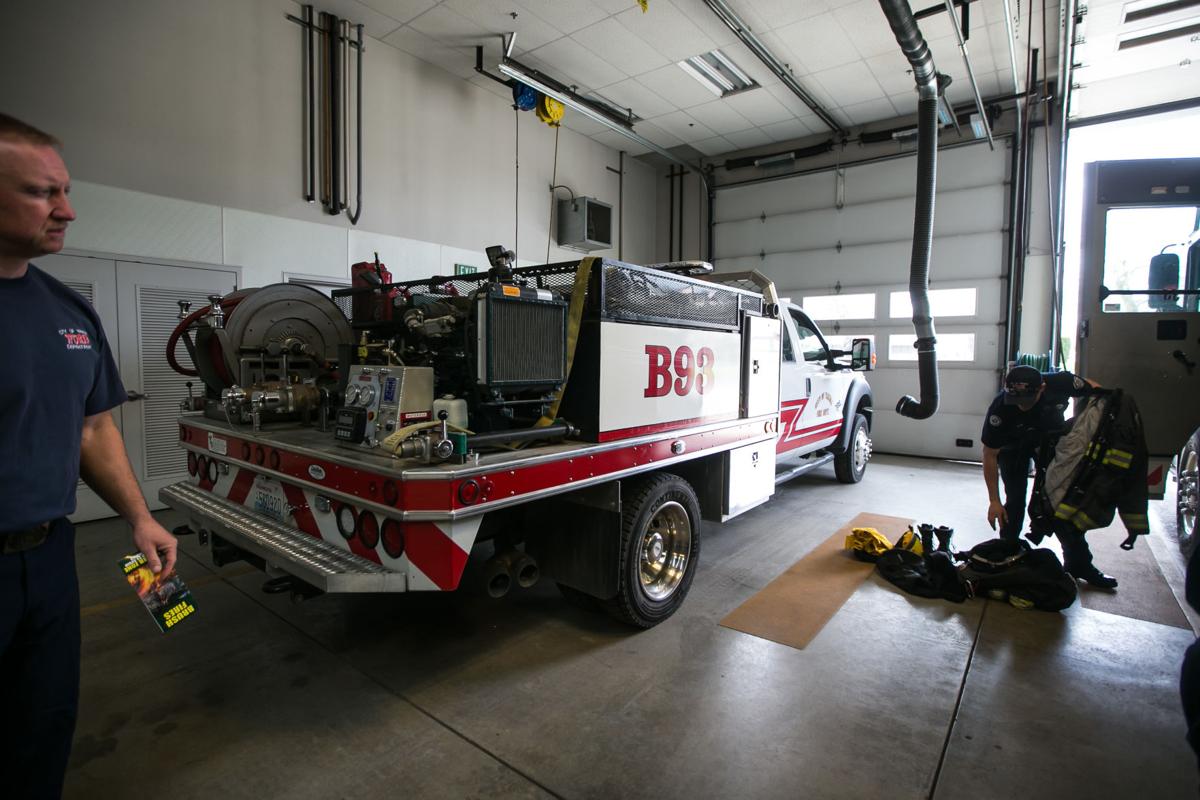 Scenes from a three-alarm brush fire east of Moxee, Wash. on Monday, July 30, 2018. Between 60 and 70 firefighters responded to the scene, as well as a tanker and spotter plane, a helicopter, and a bulldozer crew. As of 6:20 p.m., the fire was about 50 percent contained and an estimated 1,500 acres in size, burning mostly low-lying brush. The cause of the fire is under investigation.

David Oja explains the difference between a wildland, left, and a structural firefighting helmet on Monday, April 1, 2019, at 511 North 40th Avenue in Yakima.

Patrick Golie explains the difference between a firefighting brush truck and an engine truck on Monday, April 1, 2019, at 511 North 40th Avenue in Yakima. A brush truck provides the ability to cross all types of terrain.

You don't normally consider wildfires a sign of spring in Washington state.

But this year, there have been 58 fires in the first three months of the year, including one in Yakima County.

And for Josh Clark, a fire scientist/meteorologist with the state Department of Natural Resources, it’s not a good sign.

“It’s kind of grim,” Clark said. His office is predicting that this year’s wildland fire season could be as bad as — or worse than — last year, when more than 1,800 wildfires ravaged the state.

And while Yakima County is not in the bull's-eye of El Niño-fueled drought this summer, local firefighters are preparing for the worst while hoping for the best as they get ready for another year of wildfire.

Public Lands Commissioner Hilary Franz is trying to address the problem by pushing a bill that would put a surcharge on property and auto insurance to finance wildland firefighting efforts and programs that would make forests more fire resistant.

Last year saw the most wildland fires in Washington history, Franz said, with 1,850 fires burning around the state — 40 percent of them west of the Cascades.

In Yakima County, several wildfires burned in the Valley, including one in the Goat Rocks area that forced the evacuation of several camps along the shores of Clear and Rimrock lakes.

This year, forecasters are saying that El Niño conditions will give the southwest part of the state and the northern Cascades hot, dry weather, Clark said.

With the early fires this year – most of them west of the Cascades – Clark said the year appears to be off to a rough start. Normally, wildfire season starts the first week of July, but he said it is looking like it might be moved to June.

Yakima County does not seem to be as bad off this year, Clark said. That’s due in part to February storms that dumped snow on the Valley.

But that comes with its own problems, and not just the flooding recently experienced in West Valley.

The extra water, combined with the quick return of warm weather, means that wild plants will flourish, particularly sagebrush and cheatgrass, which firefighters say are among the fuels for wildfires as they dry out in the summer conditions.

Some firefighters have even nicknamed cheatgrass “grassoline” because of how flammable it becomes.

Local firefighters are taking a wait-and-see approach, while making sure they’re ready for whatever the summer may bring.

In Yakima County Fire District 5, which covers most of the Lower Valley, Deputy Chief Joe Byam said the department’s watching to see how February’s snowstorms will affect the grasses, noting that conditions vary from one side of the Valley to the other.

West Valley Fire Training Capt. Jim Johnston said his department’s watching water runoff from Ahtanum Ridge and other places to see how it will affect grass and weed growth. He said the picture on the fire season will likely become more clear in the next month.

But they’re preparing with another round of wildland fire training this month, with live-fire training in May.

Selah already had its first wildland fire last week, with a 50-by-50-foot fire north of the city. Lange said that fire burned better than they had expected.

He, too, is keeping an eye on weather conditions.

And Franz is pushing for more long-term help for the problem.

Friday, Senate Bill 5996 was introduced, which would raise the state’s insurance premium tax from 2 to 2.52 percent to finance a $55 million wildfire spending plan. The bill, sponsored by Sequim Democratic Sen. Kevin Van De Wege, has been sent to the Senate Ways and Means Committee.

The state has contributed $21 million a year for wildland firefighting, which Franz said does not cover the need, forcing the state to draw from emergency funds to cover the difference.

Under the bill, the state would use the tax revenue to hire 30 additional full-time wildland firefighters who would also work on forest-health plans, as well as add two fire helicopters to its fleet of eight aircraft and get additional Fire Boss airplanes to more quickly respond to wildland fires.

Another element of the plan would include efforts to address poor forest health, which Franz said contributes to many of the devastating wildfires.

Currently, there are 2.7 million acres of forest where drought and insect infestations have made the forests more susceptible to fire. Franz’s proposal calls for having crews go in to remove dead trees and trim smaller-diameter trees, giving the healthier trees a chance to grow, and using controlled burns to reduce fuel loads.

“I’ve seen with my own eyes an area where fire came through in 2015, burned down one side and came to abrupt halt when it came to a forest that had been treated,” Franz said.

But the funding plan faces opposition. The NW Insurance Council argues that it would make auto and business insurance policyholders foot the bill for wildfire efforts.

“Imposing a huge tax increase on home, auto and business insurance premiums essentially punishes families and small business owners who are already doing the best thing they can to protect the investment they have made in their homes, businesses, vehicles and families: Buying home, auto and business insurance,” NW Insurance Council President Kenton Brine said in a news release.

But Franz said the added tax, which she said would work out to $2 a month for the average home insurance policyholder, would help protect their property from wildfire damage, along with the air pollution that can spread throughout a region during a fire.

If the fire service is properly funded, and forests are made healthy, fires can be snuffed out before they become dangerous, Franz said.

Firefighters say they are also encouraging people to do more to protect themselves and their homes, as well as to be careful when outdoors.

“It depends on people, and how they interact with the environment,” Fire District 5’s Byam said. If people are careless about fire, or don’t take preventative steps, we’re going to have problems.”

Lange said his and other local departments are pushing for people in fire-prone areas to create 100 feet of “defensible space” around their homes, which keeps fire at bay and gives firefighters a better position from which to fight fires.

This story was updated to correct the number of firefighters that would be hired if the tax bill passes.