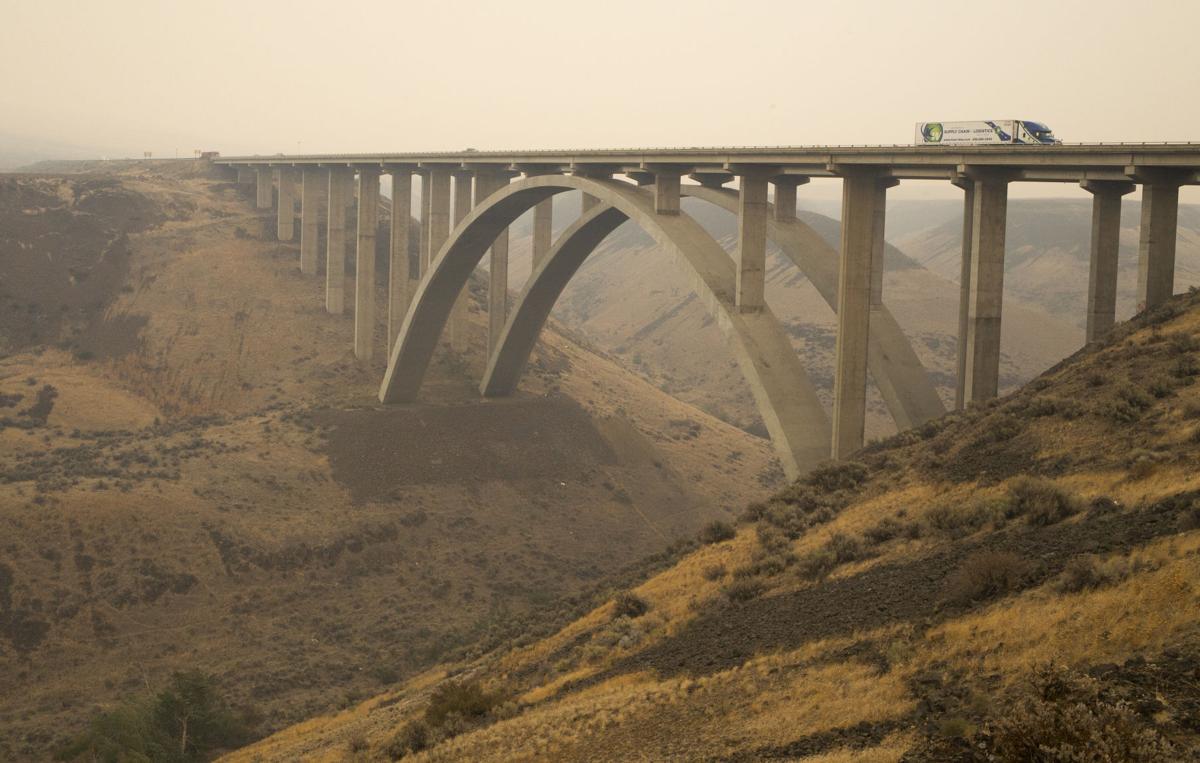 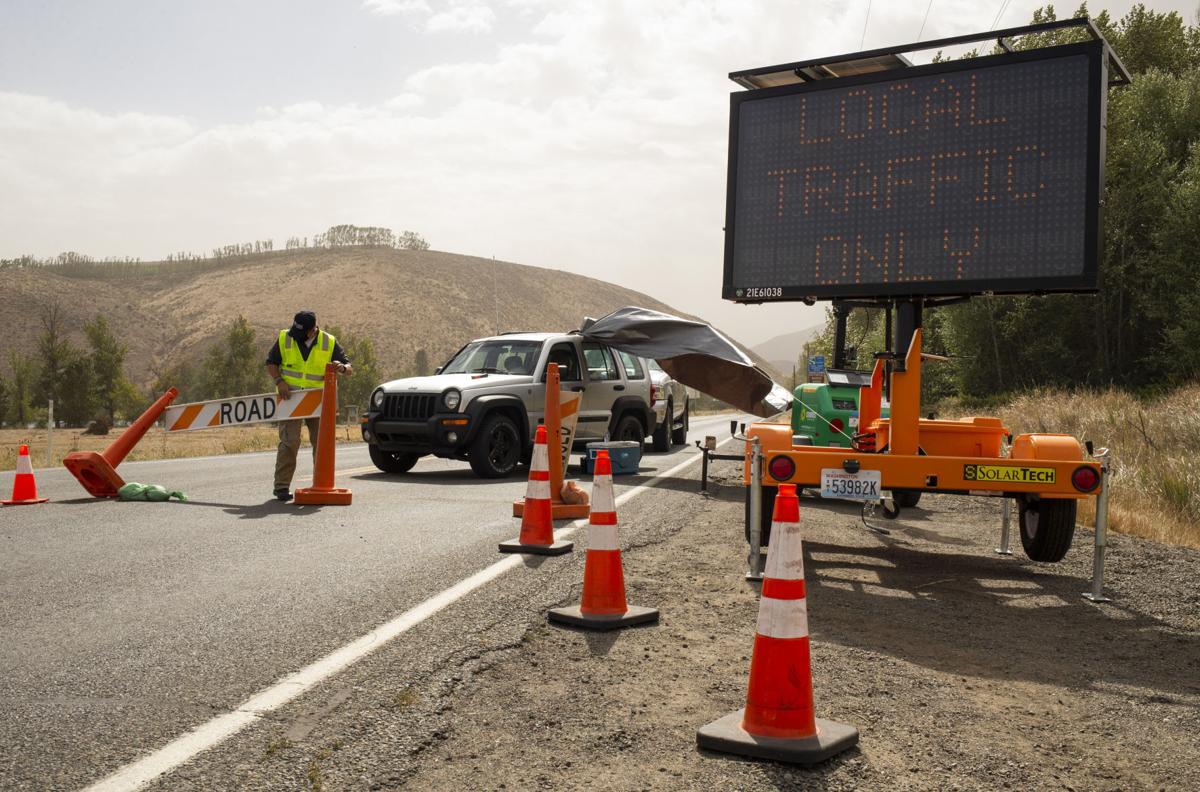 James Butler, OSG Security employee, picks up road closed signs after the wind blew them over while guarding the fire line entrance at the intersection of Thrall Road and State Route 821 on Monday, Sept. 7, 2020, in Ellensburg, Wash. 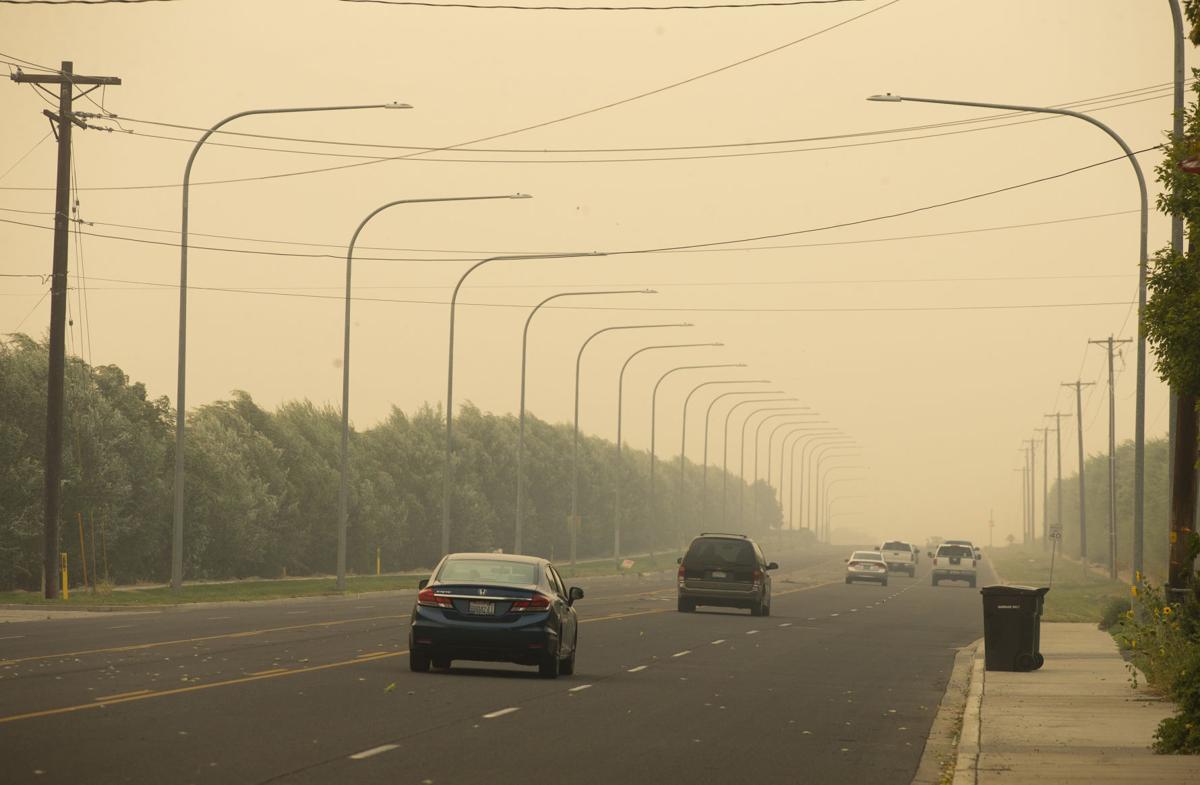 Vehicles drive along West Nob Hill Boulevard as wind blows smoke from a fire burning near Moses Lake into the area on Monday, Sept. 7, 2020, in Yakima, Wash. 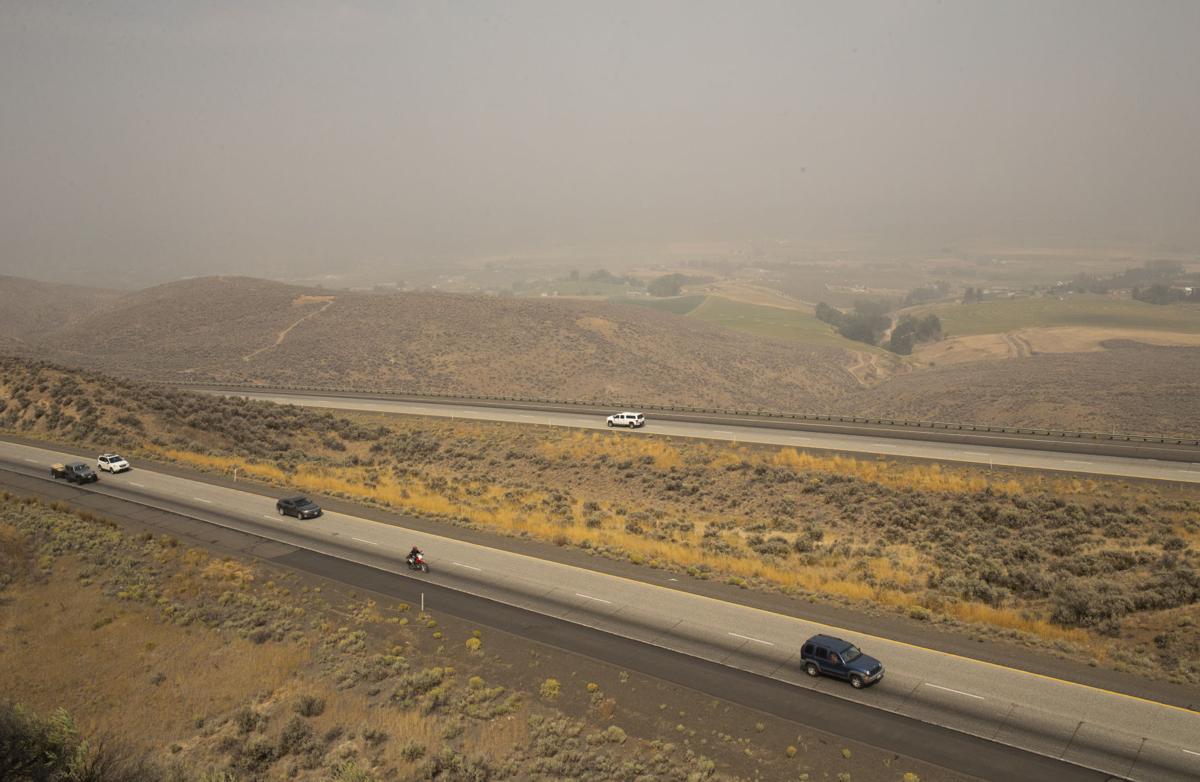 FILE — Vehicles travel along Interstate 82 as smoke blankets the area on Monday, Sept. 7, 2020, near Ellensburg, Wash. 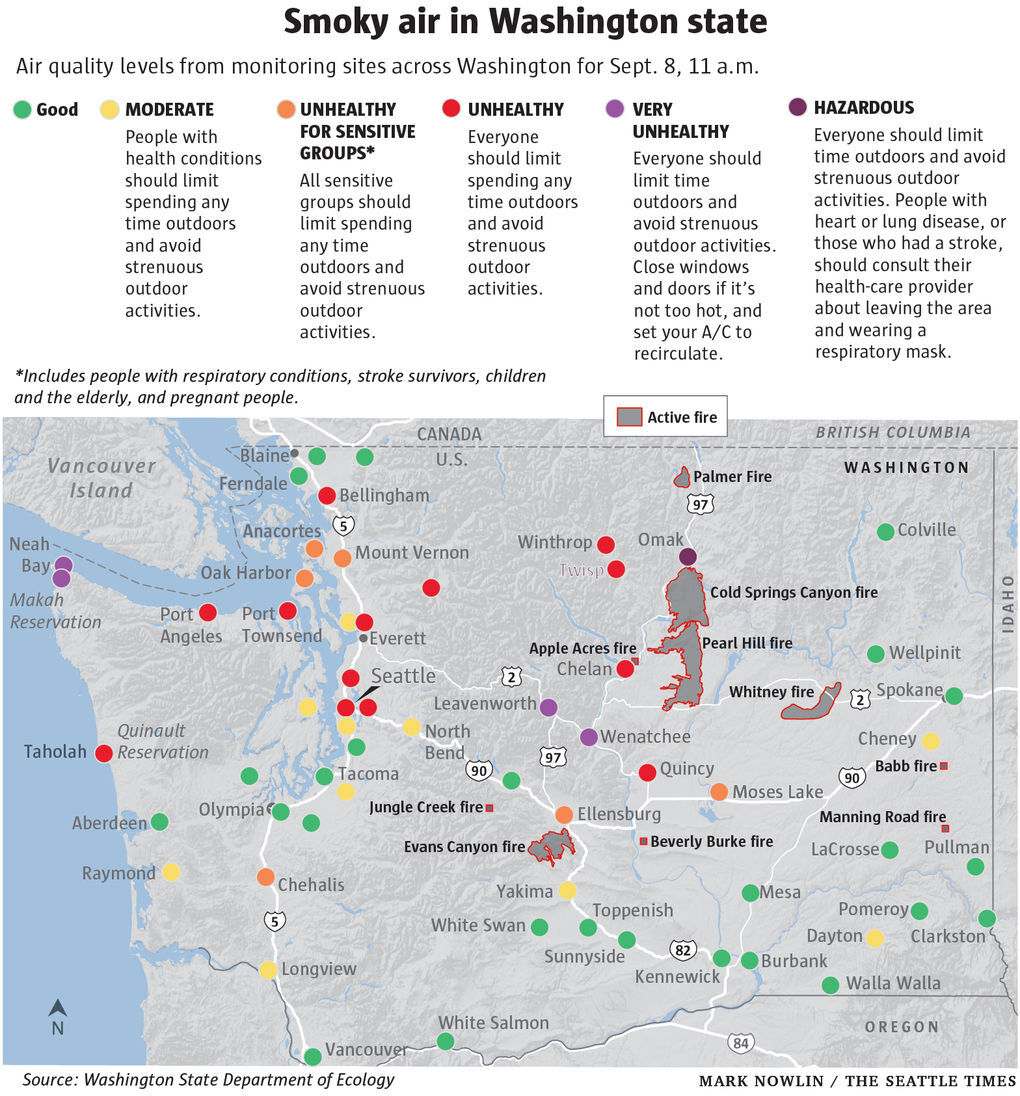 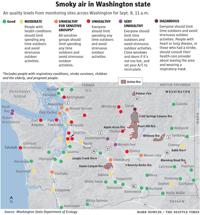 James Butler, OSG Security employee, picks up road closed signs after the wind blew them over while guarding the fire line entrance at the intersection of Thrall Road and State Route 821 on Monday, Sept. 7, 2020, in Ellensburg, Wash.

Vehicles drive along West Nob Hill Boulevard as wind blows smoke from a fire burning near Moses Lake into the area on Monday, Sept. 7, 2020, in Yakima, Wash.

FILE — Vehicles travel along Interstate 82 as smoke blankets the area on Monday, Sept. 7, 2020, near Ellensburg, Wash.

Updated 11:15 a.m.: Crews on the Evans Canyon Fire are set to be on mop-up and patrol status, as well as repairing fire suppression control lines Tuesday, according to a morning report from the Northwest Incident Management Team 12.

With new fires cropping up throughout Central Washington Monday, the Northwest Team 12 will demobilize from Evans Canyon Fire, moving on to support other fires in the region. A local unit of the state Department of Natural Resources will resume oversight of the fire within the next two days.

Temperatures are expected to be cooler Tuesday, with weather in the mid-70s and east winds of 10-14 mph with gusts up to 20 mph.

Crews are prepared to respond if new fires start locally.

State Route 821 through the Yakima Canyon, the Yakima River, boat ramps and canyon campgrounds are due to reopen 6 a.m. Wednesday, according to the report. BBQ Flats and Wenas recreation areas remain closed.

Updated 8:50 a.m.:  Firefighters have held their ground on the Evans Canyon Fire, which started Aug. 31 north of Naches. As of Tuesday morning it was at 70% containment and 75,817 acres, or 118 square miles.

State Route 821 through the Yakima Canyon remains closed. An update as to when the roadway may open will be issued Wednesday morning by 8 a.m., according to the Washington State Department of Transportation.

Visibility was reduced below a mile at many locations on Monday as a wall of dust and ash moved through the region. Ellensburg, Yakima, Yakima training center and Vagabond army base all reported 25-30 mph with gusts 40-45 mph.

Late in the afternoon, some of the firefighters responded to another fire on Interstate 82.

A total of 571 people were assigned to the fire on Tuesday, with base camps at Naches, Ellensburg and BBQ Flats.

Updated 7 p.m. Monday: Gusting winds carried dust and smoke from other wildfires into the Yakima Valley on Monday, as firefighters held the line on the Evans Canyon Fire, reaching 60% containment.

Much of the smoke and dust was coming from fires from the northeast, including in Omak, Douglas, Chelan and Grant counties, local officials said.

Yakima Valley Emergency Management officials urged citizens to stay out of fire closure areas for their safety and the safety of fire crews. Heavy fire equipment moving on narrow roads, combined with reduced visibility from smoke and dust, created dangerous conditions for everyone, authorities said.

The Evans Canyon Fire was at 75,817 acres, or 118 square miles, on Monday evening. It started Aug. 31 in the Wenas Valley and has been burning in tall grass, brush and timber in Yakima and Kittitas counties. The cause remains under investigation.

A total of 769 people were battling the blaze Monday. All related closures remain in effect. State Route 821 through the Yakima Canyon remained closed Monday.

“These winds out here could take any ember. They’re blowing from the east but we’re not taking any chances at all,” said Dana Leavitt, one of the public information officers for the Evans Canyon Fire.

Gusting winds brought by a cold front passing through from the northeast to the southwest were expected to drop off late Monday, but hazy conditions will likely remain, said Ed Townsend, science and operations officer for the National Weather Service in Pendleton, Ore.

As firefighters worked to hold containment lines on a windy day with low relative humidity and high fire danger, power outages were reported in and around Yakima, Toppenish and Sunnyside. As of early Monday evening, more than 6,000 people from Yakima, through the Lower Valley and into Walla Walla were without power, according to Pacific Power’s outage map online.

“High winds in Walla Walla and Yakima with a potential for outages. Crews on standby,” Pacific Power posted on the map just after 5 p.m.

And if high winds weren’t enough to keep people inside, air quality reached dangerous levels, prompting the Yakima Health District to recommend that everyone stay indoors, set air conditioners to recirculate and use a HEPA air filter due to the “hazardous and unhealthy air quality.”

At 2 p.m. Monday, the Washington Department of Ecology’s Air Monitoring Network showed an air quality index of 500 for Yakima. Anything 301 and above is considered hazardous. Ecology’s air quality map also showed 215 at 2 p.m. in Toppenish, which is very unhealthy.

For the latest information on air quality, go to wasmoke.blogspot.com or check Ecology’s Air Monitoring Network at enviwa.ecology.wa.gov/home/map.

In a 4 p.m. update on the Yakima Valley Emergency Management Facebook page, Operations Director Horace Ward warned about the air quality and poor visibility and also said other fires were burning in Yakima County, “but they’re being fought aggressively,” he said. Among them was a blaze at Sarg Hubbard Park in Yakima.

No records were set, but Yakima did see one wind gust of 46 mph, Townsend said. As winds lessen overnight to 10 to 15 mph, visibility should improve.

Though temperatures Monday dropped thanks to the cold front and the hazy conditions it brought, they’ll rise again near the end of the week as relative humidity stays low, he said.

“We’re in a very dry pattern even though we had this cold front come through. Our relative humidity will still be in the low teens, 10 to 15% ... in the Yakima Valley. That’s pretty low.”

State Route 821 through the Yakima Canyon will remain closed through Labor Day weekend. People should use Interstate 82.

The public should stay out of the fire area north of Naches and Selah, and south of Ellensburg.

The BBQ Flats and Wenas recreation areas are closed.

The Yakima River Canyon is closed, including boat launches and campgrounds.

Level 1: “Ready” People should be aware of the fire threat in the area and start preparing to leave.

Level 2: “Set” – People should be prepared to leave at a moment’s notice. Important papers, photos and medicines/prescriptions should be packed and ready to take with you.

Containment of the Evans Canyon Fire has reached 60% as firefighters are bracing for a significant wind event Monday and into Tuesday morning.