A fire train moves through the Yakima River Canyon on Sept. 3, 2020.

A BNSF fire train moves through the Yakima River Canyon on Sept. 3, 2020. 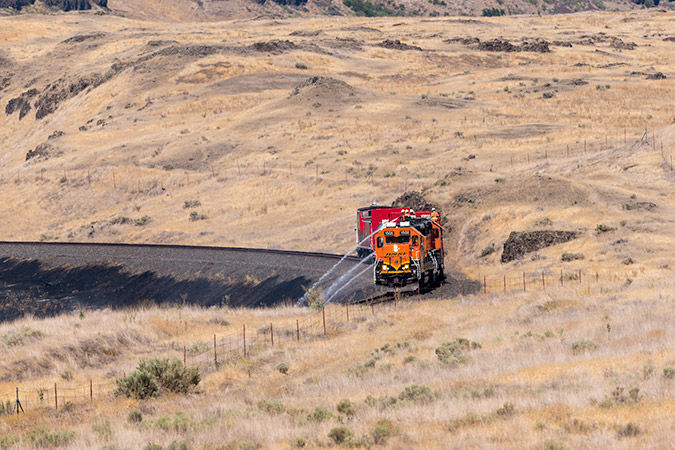 A photo of one of BNSF's fire trains in action.

A fire train moves through the Yakima River Canyon on Sept. 3, 2020.

A BNSF fire train moves through the Yakima River Canyon on Sept. 3, 2020.

A photo of one of BNSF's fire trains in action.

Nearly 1,000 firefighters have fought the Evans Canyon Fire with an impressive array of machines on the ground and in the air — at least 127 engines, 13 bulldozers, two tank-like skidgines, 21 water tenders, six helicopters and two airplanes.

Joining them in the battle through the Yakima River Canyon is one of two specially equipped firefighting trains from BNSF Railway, both based in Washington.

Each train can take firefighters to hard-to-reach hot spots, carries 30,000 gallons of water and uses hoses to shoot water up to 30 feet away.

Considering the value of BNSF trains and the loads they transport through arid, windy and often remote Western country, the trains are key to protecting railroad property, employees and the grassy rangeland they move through.

One of the trains was in the Yakima River Canyon and moving through the upper canyon late last week. The trains are similar, with one or more engines, on-board generators, a caboose that transports firefighters and can serve as a command center, plus cars carrying large white tanks of water.

The trains can get firefighters to places firetrucks can’t access and bring water to spots where there are no water sources. The fire trains carry significantly more water than a truck; a typical firetruck carries 500 gallons of water, while the train hauls 30,000 gallons, according to a recent story about the fire trains on the BNSF website.

Rich Elliott, deputy chief of Kittitas Valley Fire and Rescue, saw the BNSF firefighting train in the upper part of the Yakima River Canyon around mileposts 21 and 22.

“Having that resource available and having the railroad be willing to work with us, it did provide some assistance,” he added.

“We really appreciate all the cooperating agencies, and Burlington Northern is one of them,” he said.

Containment of the Evans Canyon Fire has reached 60% as firefighters are bracing for a significant wind event Monday and into Tuesday morning.