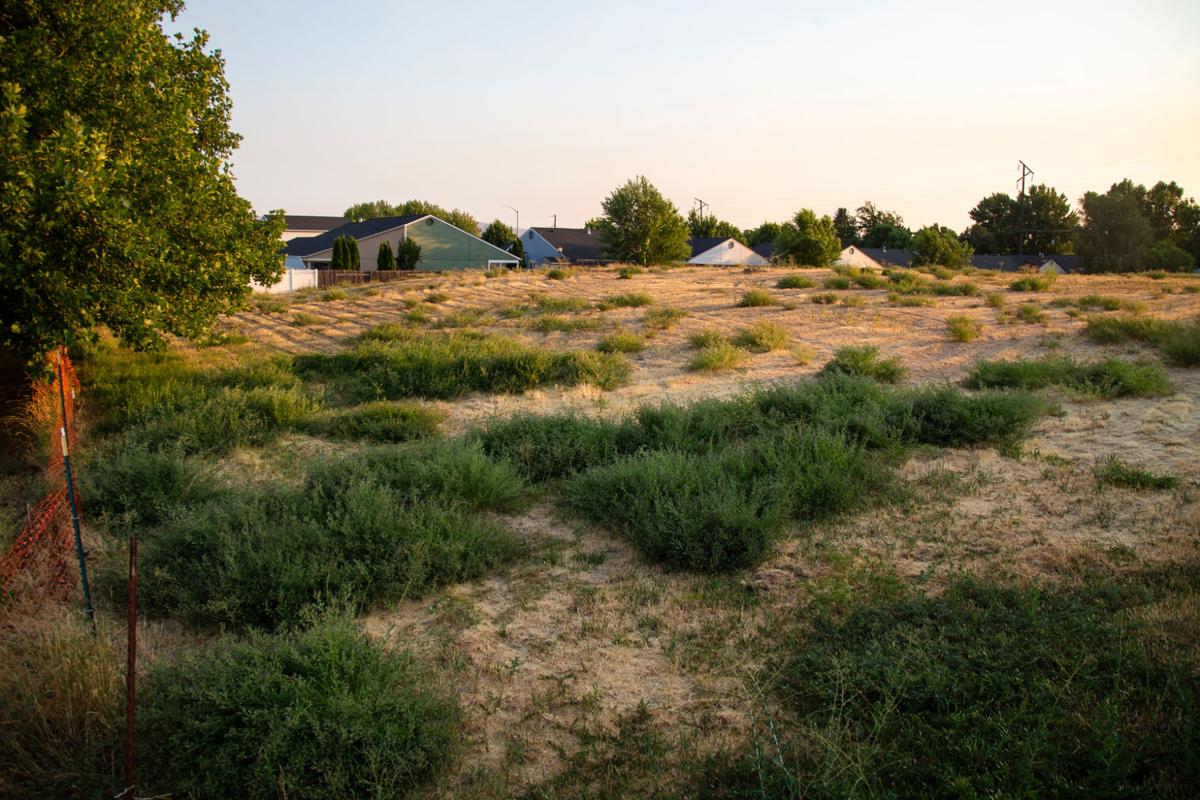 Nestled against single-story homes, this lot is the site of a proposed affordable housing complex at 118 N. 50th Ave. in Yakima, Wash. (Jake Parrish, Yakima Herald-Republic) 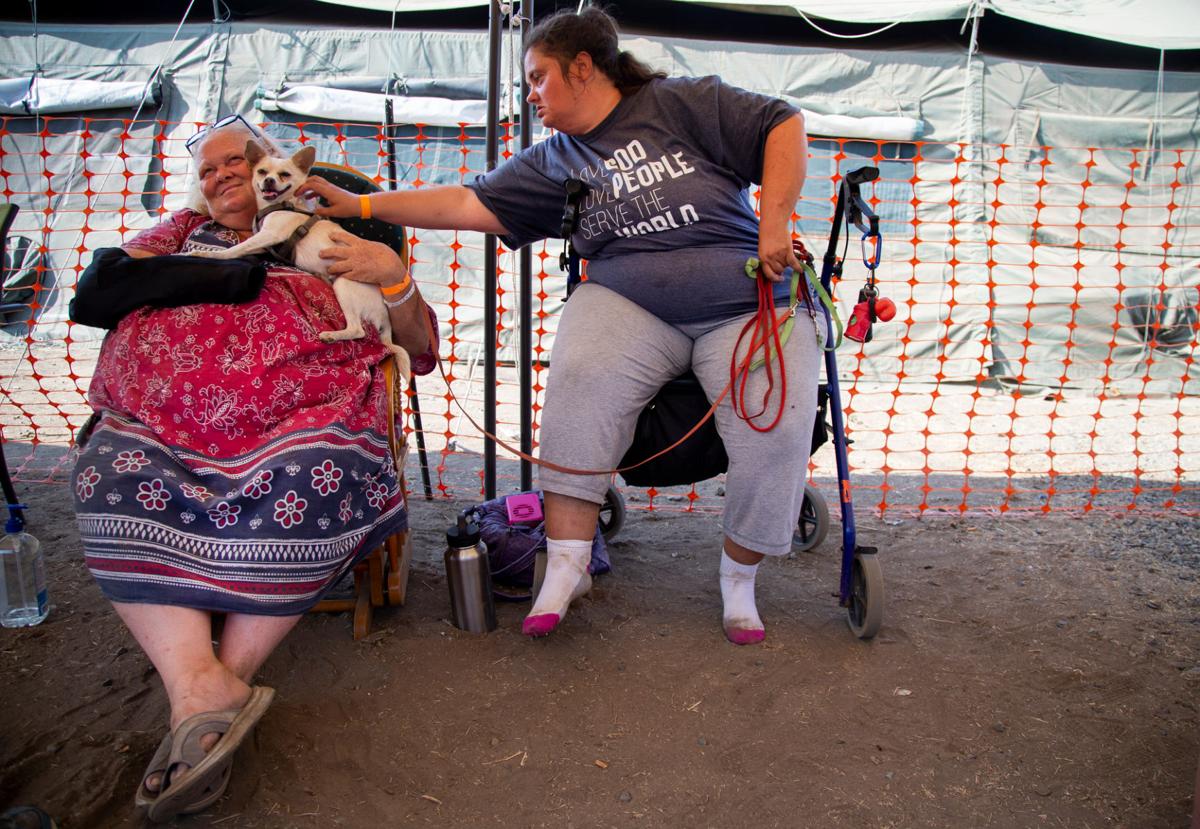 Kathy Hitchcock pets Mary Fromm's dog Meja at Camp Hope in Yakima, Wash. on Tuesday, July 31, 2018. Hitchcock has been homeless for about three months, while Fromm has been without a permanent home for over a year.

Nestled against single-story homes, this lot is the site of a proposed affordable housing complex at 118 N. 50th Ave. in Yakima, Wash. (Jake Parrish, Yakima Herald-Republic)

Kathy Hitchcock pets Mary Fromm's dog Meja at Camp Hope in Yakima, Wash. on Tuesday, July 31, 2018. Hitchcock has been homeless for about three months, while Fromm has been without a permanent home for over a year.

Lisa Clark has been living in a camp trailer in Yakima County for three years, waiting for a call that it’s her turn to receive a housing voucher.

“At least I have my trailer. I’m thankful I have a roof over my head. I have water and power,” she said. “Otherwise I don’t know where I would be.”

Clark is one of dozens — if not hundreds — of people in Yakima County who can’t find low-income or affordable housing.

“I hear it all the time,” Clark said. “I help work at a food bank ... and people there just can’t find places to live that they can afford.”

And if you’re a family applying to live in one of the Yakima Housing Authority’s 500-owned and managed units and don’t work on a farm, you could be waiting anywhere from 18 months to six years.

Experts say anecdotally, the need is great. And steps to try to address that need are often met with problems including complaints from nearby residents and a lack of funding.

How did we get here?

“On the one hand, affecting demand, we’ve seen incomes remain fairly stagnant or grow at a much-reduced rate particularly among lower-income families and households in the recent decade,” she said.

“And we’ve seen on the supply side, housing prices go up quite rapidly compared to income.”

That’s further exacerbated by low vacancy rates, which allow landlords to charge more than they could if renters had more choices for housing, said Washington Low Income Housing Alliance Director of Policy and Advocacy Michele Thomas.

She recalls several years ago, when landlords would offer incentives such as a free month’s rent or a DVD player to try to entice new renters.

Now with vacancy rates as low as they are, for-profit private rentals can raise rents almost as much as they want, which prices many residents out of the market, she said.

“They’re able to do that when they’re in an environment where there are more people looking for housing than is available,” she said.

Basically, there’s always someone else who will pay the rent.

As a result, people are out of options and the number of people experiencing homelessness in Washington is rising, according to a state Department of Commerce study.

Jennie Humbyrd would have been one of them if her parents hadn’t allowed her to move back home.

The 33-year-old mother has been on a waiting list for low-income housing for more than a year. She was added to the list after she couldn’t find a job when she and her husband divorced some two years ago. As a result, she moved back in with her parents because she couldn’t afford housing.

Humbyrd is going to school to improve her career prospects and has a work study job during the traditional school year.

It isn’t enough to support her and her son on their own.

In Washington state, a $100 increase in rent is associated with a 6 to 32 percent increase in the number of people experiencing homelessness, according to the Commerce study.

Not in my backyard

The answer isn’t as simple as just building more housing.

In the case of the Bicycle Apartments, which have been approved but not yet built, nearby residents are concerned the complex will bring more traffic than 50th Avenue can support. For Pear Tree Place, which has now operated at Powerhouse Road and Englewood Avenue for years without many problems, nearby residents complained the sober, low-income apartment complex would increase crime and lower property values. Prosser residents were concerned the Catholic Charities complex would overburden schools and hurt the city’s image as a small town.

This type of pushback happens nationwide, not just in Central Washington, and is largely rooted in people’s fear of the unknown, Scally said.

“It’s human nature to be afraid of people we might not feel very connected to, whether it’s a different socioeconomic status or a variety of other differences that affect the way we live,” she said.

“Not all of us are troublemakers,” Clark said. “We just want a place to live.”

States and local jurisdictions have to work together to make the environment more favorable for the construction of low-income and affordable housing, Scally said.

She pointed to examples in Massachusetts and Connecticut, where states give cities financial incentives to create low-income housing.

As a part of the development, the city engages the broader community to gather opinions on proposed complexes. That process was created in part to eliminate pushback from nearby residents who may fear it will bring increased crime or lower property values.

Closer to home, Thomas’ organization is advocating for more state investment in affordable housing. The group hopes that will increase the money available for vouchers for residents as well as increase the amount of housing that can be built.

Thomas said local jurisdictions also need to do their part to eliminate barriers that make it harder for nonprofit developers to build affordable housing, such as finding affordable land or high permitting costs.

It likely will take more than just one of these solutions to be successful.

“Eliminating barriers can’t be the only solution. It’s important,” she said. “But we need investment. There’s just no doubt about it. There’s no rational argument that can be made that says we don’t need investment.”