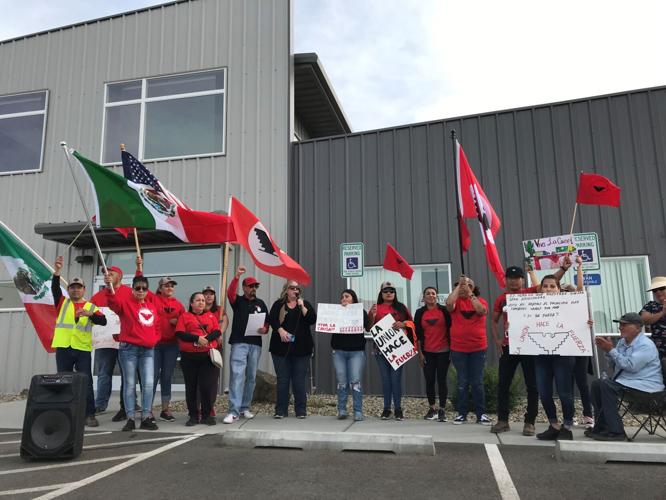 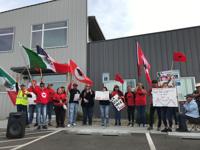 A committee of farmworkers announces their intent to form a union at Ostrom Mushroom Farms on Saturday, Sept. 17, 2022. 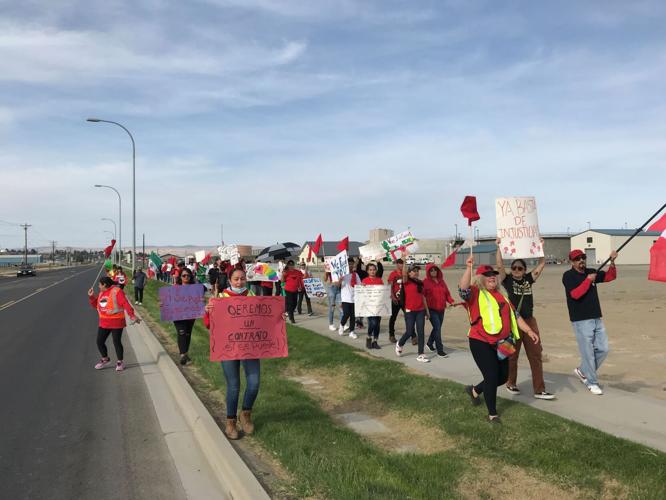 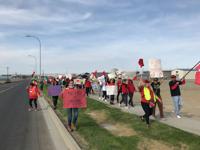 A committee of farmworkers announces their intent to form a union at Ostrom Mushroom Farms on Saturday, Sept. 17, 2022.

About 150 farmworkers and community members clad in red and waving flags marched almost two miles Saturday from South Hill Park in Sunnyside to Ostrom Mushroom Farms, where they rallied outside Ostrom’s office for the second time in a few months.

While marching they demanded justice in the workplace, chanted “Sí se puede” and played music. At the rally, a worker committee announced that a majority of the workers at Ostrom had voted in favor of a union.

Castillo said she had come to protest the working conditions and unfair pay, and because workers were overworked and undervalued. A union would cement changes in the workplace, she said, and more than 70% of workers had voted in favor of unionizing.

The union would be affiliated with the United Farm Workers, according to UFW representative Victoria Rudy. The next step is to get Ostrom to recognize the union and begin collective bargaining.

Ostrom is also in the midst of a civil rights lawsuit. In August, Washington Attorney General Bob Ferguson filed a lawsuit alleging Ostrom had discriminated against domestic workers and women and deceived workers regarding job requirements.

Farmworkers at Ostrom had originally tried to submit a petition in June, alleging that Ostrom had enacted mandatory extended shifts and unrealistic production quotas while threatening and bullying workers.

Maria Lopez, a mushroom picker at Ostrom, said that workers had come to submit the petition once again. She hoped it would be accepted. Ramón Gonzalez, another worker, said little has changed since he protested outside Ostrom in June and that nothing has been resolved.

“We’re staying out here to show that we are here, that we are not leaving until we get what we want,” Gonzalez said.

Castillo said there have been some positive changes, especially since workers had begun to advocate and unionize. She said hours have been reduced and the workplace environment has improved, but that there is still pressure from managers. She believes that once workers unionize, changes will be larger and more permanent.

Other UFW members from Lower Valley communities praised the impact of a union in the workplace. Ana Cruz, a farmworker from Prosser, said that the UFW guaranteed respect for workers’ rights. Adelaida Mendoza, a UFW member from Mabton, said union representation improved medical plans and vacation while decreasing maltreatment.

José Martínez, a member of the workers’ committee who has steadfastly advocated for unionization, thanked community members for showing up.

“I’m happy with the support of the community,” Martínez said in Spanish. “I really like it because we’re fighting for justice and equality and respect.”

Jasper Kenzo Sundeen’s reporting for the Yakima Herald-Republic is possible with support from Report for America and community members through the Yakima Valley Community Fund. For information on republishing, email news@yakimaherald.com.

I appreciate this news being covered so well for our Yakima Valley communities. Whoever is responsible for getting this reporter out for this report, thanks to you too.

Good reporting about the efforts of workers in Sunnyside to improve their working conditions .