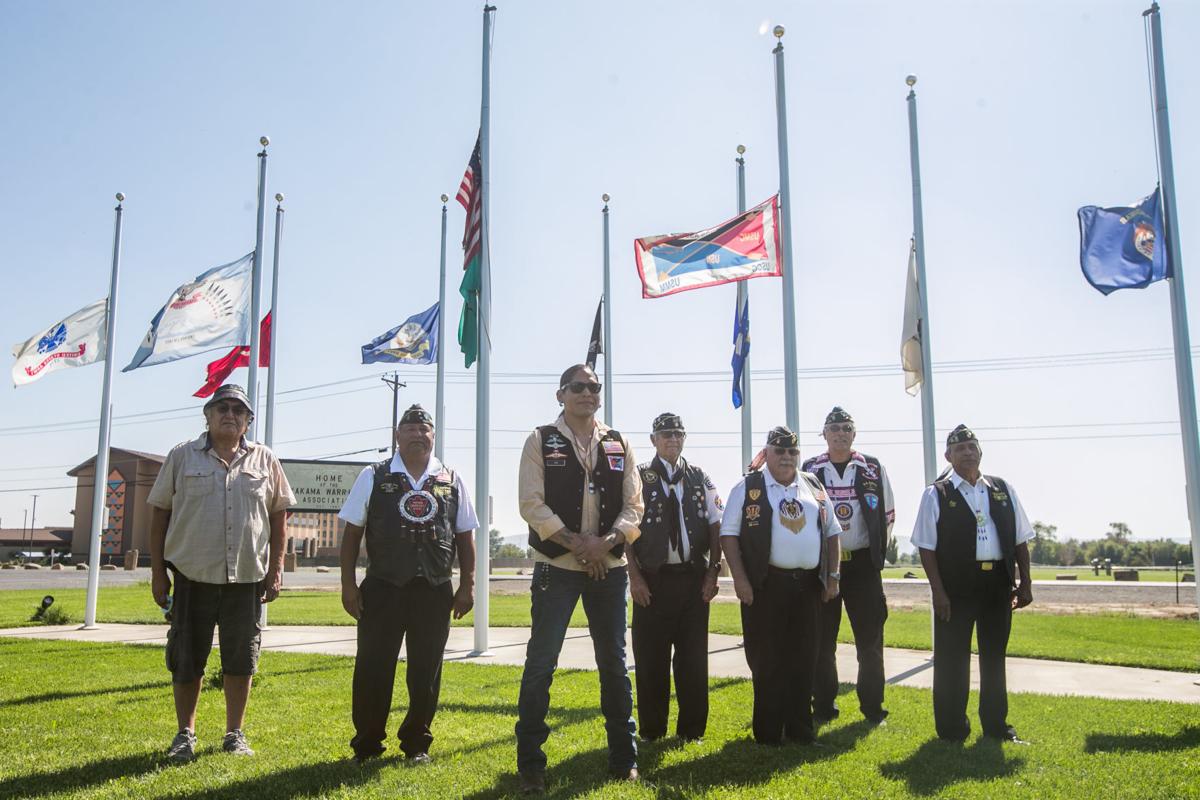 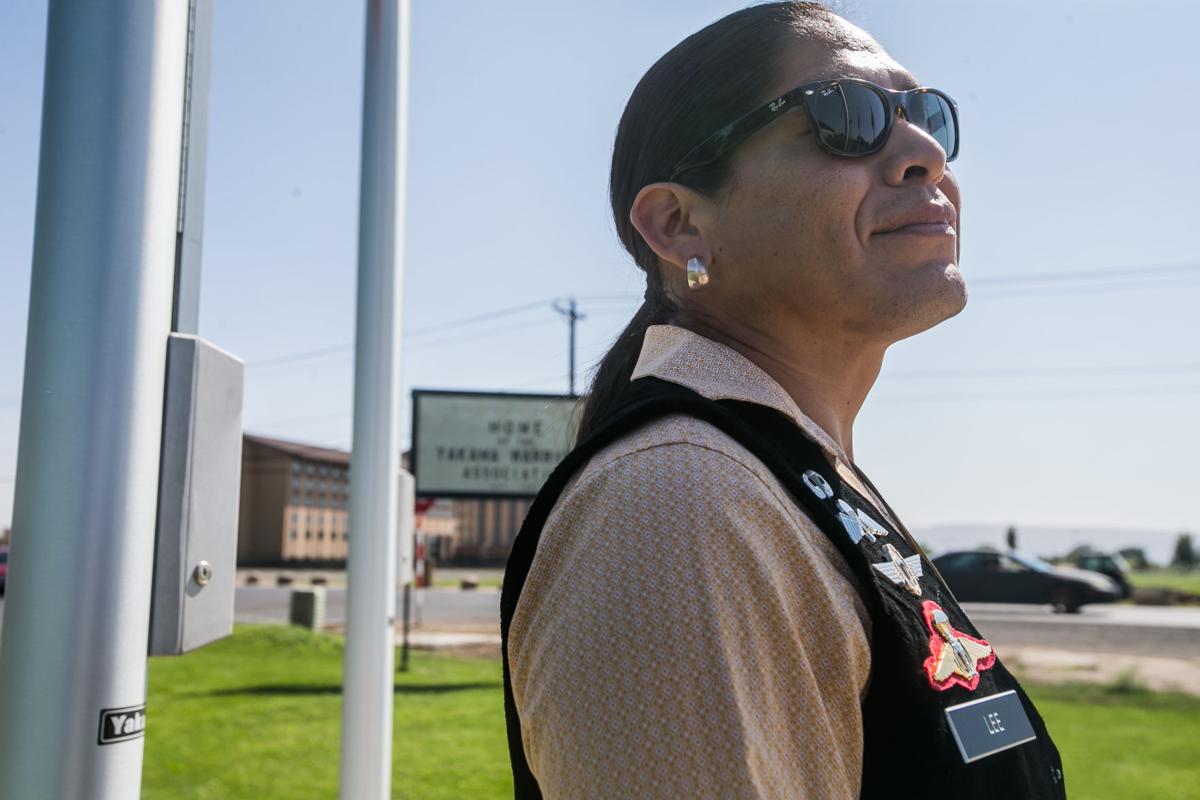 Updated: The Sept. 11 event on Saturday in Toppenish has been postponed because of new COVID-19 restrictions in place on the Yakama Nation, according to organizers.

George Lee Jr. got the idea of honoring veterans and their families on the 20th anniversary of 9/11 from a fellow veteran — his father.

“He’s the one who said, ‘You know what we should do?’ I picked it up and ran with it,” Lee said, thanking his father for his suggestions.

A decorated veteran who graduated from White Swan High School, George Lee Jr. served for 17 years in the Army and Air Force, including tours as part of Operation Enduring Freedom, before returning home to the Yakama Reservation, where he lives with his wife and children. He is a member of the Yakama Warriors Association and spiritual leader of the Toppenish Creek Longhouse near White Swan.

Longhouse and Warriors Association members will present a Sept. 11 program titled “Honoring Enduring Freedom” on Saturday at the Yakama Veterans Building, 480 Buster Road. All veterans and Gold Star families are invited “so we may positively embrace those who sacrificed, in all capacities,” Lee said. It begins at 8:30 a.m. and concludes with a noon meal featuring traditional Yakama foods.

“Enough could not be said in regards to the sacrifices made during this war, not only by those soldiers, sailors, airmen and Marines, but also of those Gold Star families,” Lee said.

Everything is happening because of many who are helping, he said in praising Longhouse and Yakama Warriors members.

“It is their efforts that are going to be in the background, and I don’t want those background efforts to go unnoticed,” Lee added. “We do have members of the Longhouse that very much support veterans and we have veterans who serve in the Longhouse.”

He also thanked the Yakima Valley Community Foundation for funding the commemorative 9/11 event with a grant of $10,000 to the warriors association. The event will include free COVID-19 vaccines, supported by the Yakima Health District.

“Our veterans have sacrificed dearly for our country and sadly more than 12,000 veterans died from coronavirus-related complications since the pandemic began,” she said. “We want our heroes and their families to know we are grateful to them and that our community cares about their wellbeing.”

Honoring Enduring Freedom eventsEvents begin Saturday with presentation of the colors by the Yakama Warriors and conclude with a meal featuring traditional Yakama foods. Operation Enduring Freedom veterans and their families are specifically invited to attend so they may be recognized by the Yakama Nation. But the event is open to all veterans and their families.

“The focus of this is for all veterans to come together, ensuring that Enduring Freedom Veterans and Gold Star families do not feel any sort of remission due to the withdrawal (from Afghanistan), and allowing the support of one another to take place safely,” he said.

Yakama historian Emily Washines will speak about different aspects of the event. She will begin by introducing the Yakama Warriors and the drummers. Grammy-nominated Black Lodge Singers will drum and sing.

“Reveille” will be followed by a 21-gun salute and “Taps,” Lee said, with Washaat religious services and the 20-year commemoration of 9/11 after that. On the exact times that each tower was hit and then fell, and when the Pentagon was hit and the time of the crash in Pennsylvania, Washines will speak and include the number of casualties, he added.

“We’ll be honoring those people with a moment of silence,” Lee said.

At 10:30 a.m., organizers will lead in Operation Enduring Freedom veterans and their families. The Black Lodge Singers will sing flag and honor songs, and others, Lee said.

“After those songs are sung, we’ll be going down the line of Gold Star (families) and veterans with the gifts,” he said. “Gifts will consist of Yakama Nation Pendleton blankets, Yakama Nation pins, Yakama Nation lanyards and any other additional items that are brought forth by families of the Toppenish Creek Longhouse ... and the Yakama Warriors will be contributing to the gifts.”

Once that recognition is complete, veterans and Gold Star families can talk about their experiences, with the traditional meal set for noon. It will be presented by Longhouse members and will include salmon, deer, roots, huckleberries and most importantly, water, Lee said.

“This is who we are as Yakamas,” Lee said. “I want them to feel as if we are speaking out loudly and proudly — welcome to Yakama country. This is who we are. This is how we present ourselves in honoring our warriors.”

Supporting veterans and familiesMuch goes unspoken by veterans and their families when they return home, Lee said. He thinks of what his wife endured “because of who I am and the hardships I’ve had to go through,” he added.

A good friend of his was killed in Afghanistan 10 years ago. “He left two daughters,” Lee said. Remembering his buddy and the family he left behind was one aspect of what drove him to organize Saturday’s gathering.

He also remembered when he started drumming as a teenager and hearing elders speak of traditional ways. Over and over, they told him, “If you forget our way of life, we have all suffered for nothing,’” Lee said.

While serving in Afghanistan, Lee occasionally “put on war paint, as Indigenous would call it. I went out on a mission one time,” he said, and a village elder asked him about who he was. After Lee explained he was Native American, the man said he thought they no longer existed, that they had been wiped out.

“His look of bewilderment — you guys are still alive? I want to take that in several different ways. It hurt my feelings,” Lee said. But a renewed appreciation of Native ways of life gave him more motivation to say, “’Let’s do this,’” he said.

“Let’s keep fighting the good fight. Let’s do what the elders said we have to do,” he said.

Events commemorating 9/11 in the Yakima Valley

• At 2 p.m., the Yakima Police Department and Yakima Fire Department will have a ceremony to honor lives lost on 9/11. People may attend in person at the north lawn of the police department, 200 S. Third St., or on Facebook Live at www.facebook.com/YakimaPoliceDepartment.

• "Honoring Enduring Freedom" will begin at 8:30 a.m. at the Yakama Veterans Building, 480 Buster Road, Toppenish. The event presented by the Toppenish Creek Longhouse and the Yakama Warriors Association will commemorate the 20th anniversary of 9/11 and recognize veterans of Operation Enduring Freedom and their families. It will conclude with a meal at noon. Free COVID-19 vaccines will be available.