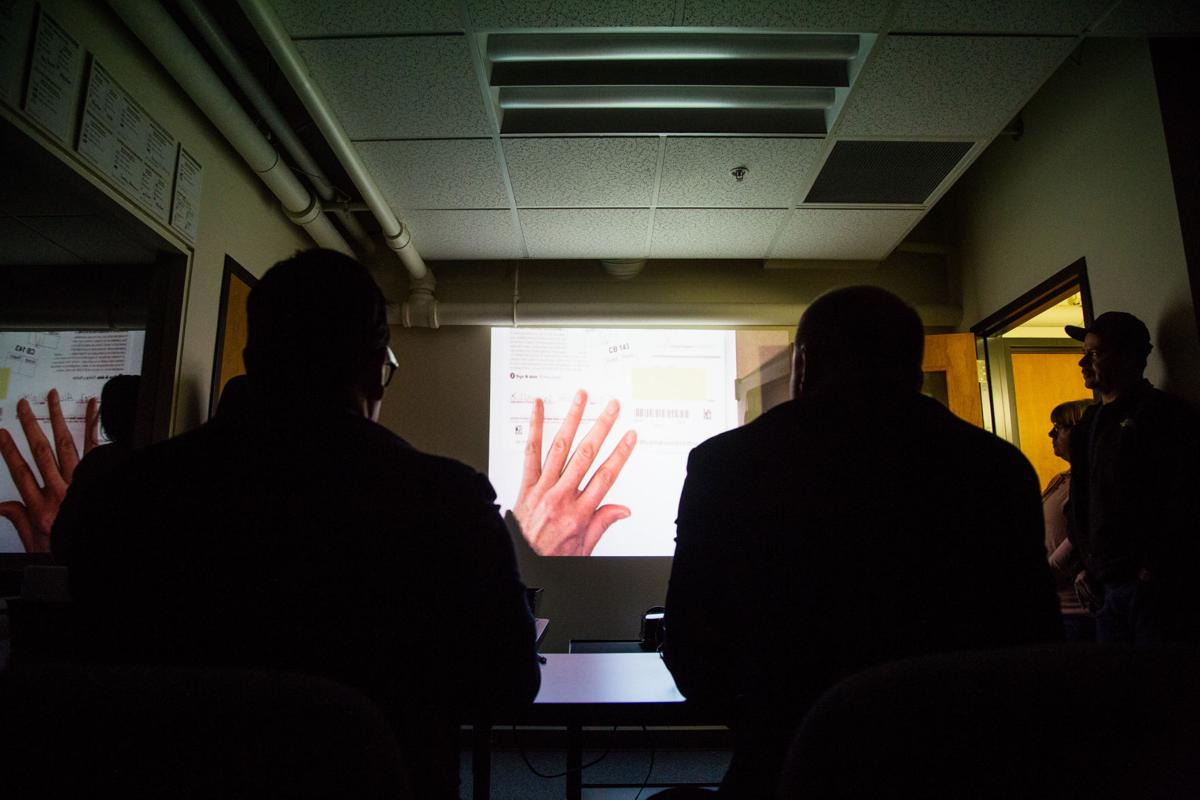 The Yakima County elections canvassing board reviews the signatures of several ballots in the Wapato mayor’s race during a procedure at the elections office in Yakima, Wash., Tuesday, Dec. 5, 2017. Following the process, Orozco lead Hector Garza with 277 to 273 votes. (SHAWN GUST/Yakima Herald-Republic) 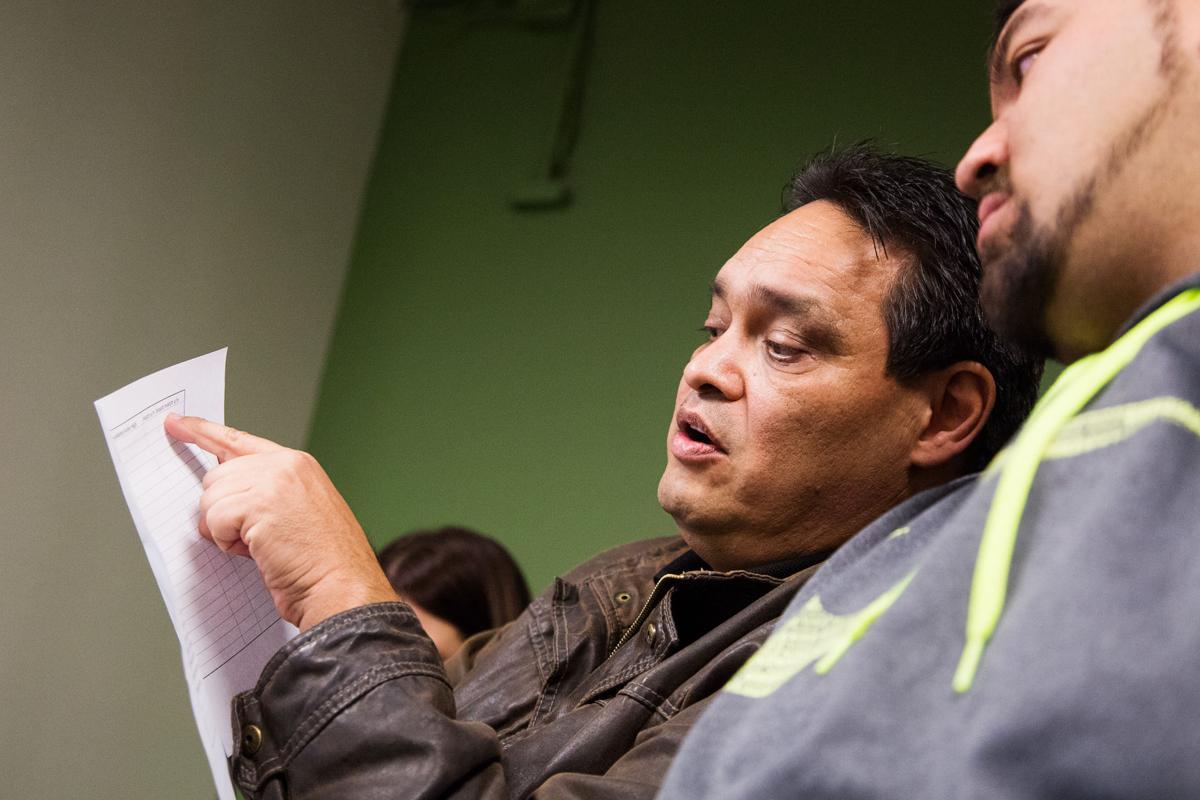 Juan “Eddy” Orozco looks over a list of signatures in question prior to a Yakima County elections canvassing board procedure to review the signatures of several ballots in the Wapato mayor’s race at the elections office in Yakima, Wash., Tuesday, Dec. 5, 2017. Following the process, Orozco lead Hector Garza with 277 to 273 votes. (SHAWN GUST/Yakima Herald-Republic)

The Yakima County elections canvassing board reviews the signatures of several ballots in the Wapato mayor’s race during a procedure at the elections office in Yakima, Wash., Tuesday, Dec. 5, 2017. Following the process, Orozco lead Hector Garza with 277 to 273 votes. (SHAWN GUST/Yakima Herald-Republic)

Juan “Eddy” Orozco looks over a list of signatures in question prior to a Yakima County elections canvassing board procedure to review the signatures of several ballots in the Wapato mayor’s race at the elections office in Yakima, Wash., Tuesday, Dec. 5, 2017. Following the process, Orozco lead Hector Garza with 277 to 273 votes. (SHAWN GUST/Yakima Herald-Republic)

This coverage of questions raised by Wapato’s 2017 mayoral election is one story in a series that resulted from an investigation into claims of wrongdoing by city officials in Wapato.

The process prompted conversations about ways to ensure the correct person is voting while not making it more difficult for people to cast ballots, said Yakima County Auditor Charles Ross.

Even before people started voting, someone challenged Orozco’s residency, questioning whether he lived in city limits, Ross said. But the person didn’t show up for the hearing and Orozco provided documents and witnesses that led the county elections board to determine he lived in the district and was qualified to run.

Then, during signature verification, election officials noticed something strange — a “high number“ of Wapato ballots were rejected Ross said.

“In a small community like that,” he said, “it normally doesn’t happen.”

Those ballots often came from voters who had voted at least once before and didn’t seem to have any problems previously, said Yakima County Elections Bilingual Program and Office Coordinator Yolanda Arellano.

When someone’s ballot signature doesn’t match the one on file — from a voter registration, Department of Motor Vehicles registration or other official signature — the voter is sent what’s called a “cure” form.

Generally, the voter signs that form and sends it back to the elections office. If it matches the ballot signature, the ballot is counted.

When the office sent forms to the addresses of some voters with a signature that didn’t match the one on file, it received multiples back from the same voter, but with different signatures. The additional forms weren’t the result of several sent to the home from the Yakima County Election’s Office, but instead were generic versions that can be printed from the Secretary of State’s website.

Ross said he talked with auditors from several counties about the situation and they interpreted the law differently.

“We made several inquiries about how many times someone can try to cure their signature,” he said.

Ross said some auditors only allow a voter one attempt to “cure” a signature, while others accept the ballot if at least one of the forms matches the ballot signature.

The Secretary of State’s office advised Ross to accept the ballot if the office received a form that matched, no matter the number of forms returned, Ross said.

“Quite frankly, it’s created a lot of discomfort statewide with auditors,” he said.

While the office was getting back multiple cure forms, it also received complaints from Wapato voters that people were coming to their door and wouldn’t leave without a filled-out ballot, Ross said.

After the election, the county’s canvassing board had its first meeting to determine which signatures should be counted and which shouldn’t.

The meeting was completed with Orozco losing by two votes. The close margin triggered an automatic recount.

A few days after the meeting, where people’s signatures were projected publicly on the wall of the elections office for the canvassing board and the public to review, the Orozco campaign brought in nearly 20 cure forms, said Arellano.

She said it’s not unusual for campaigns to look at the list of people with nonmatching ballot signatures and have them sign a cure form. Orozco’s campaign visited the elections office nearly every day, while Garza’s campaign went once to check on questioned ballots, she said.

At the second meeting of the canvassing board, which was sparked by the recount and once again reviewed all the challenged signatures, Orozco won by four votes.

During the recount, ballots that appeared to match the one on file for a voter but were misspelled were counted. Because there was a recount, it’s unclear if those were the only votes that were counted that hadn’t been previously.

“It appeared to be that all votes that were counted that were previously rejected ... were for Juan,” Ross said.

Alvarez-Roa almost immediately appointed Orozco as city administrator, giving him a seven-year contract worth $95,000 a year. According to the agreement, Orozco will be paid for all seven years even if he’s fired. He’ll also receive a six-month severance package.

Investigation: What's going on in Wapato?

YAKIMA, Wash. -- Four weeks after the polls closed, Wapato finally has a mayor-elect.