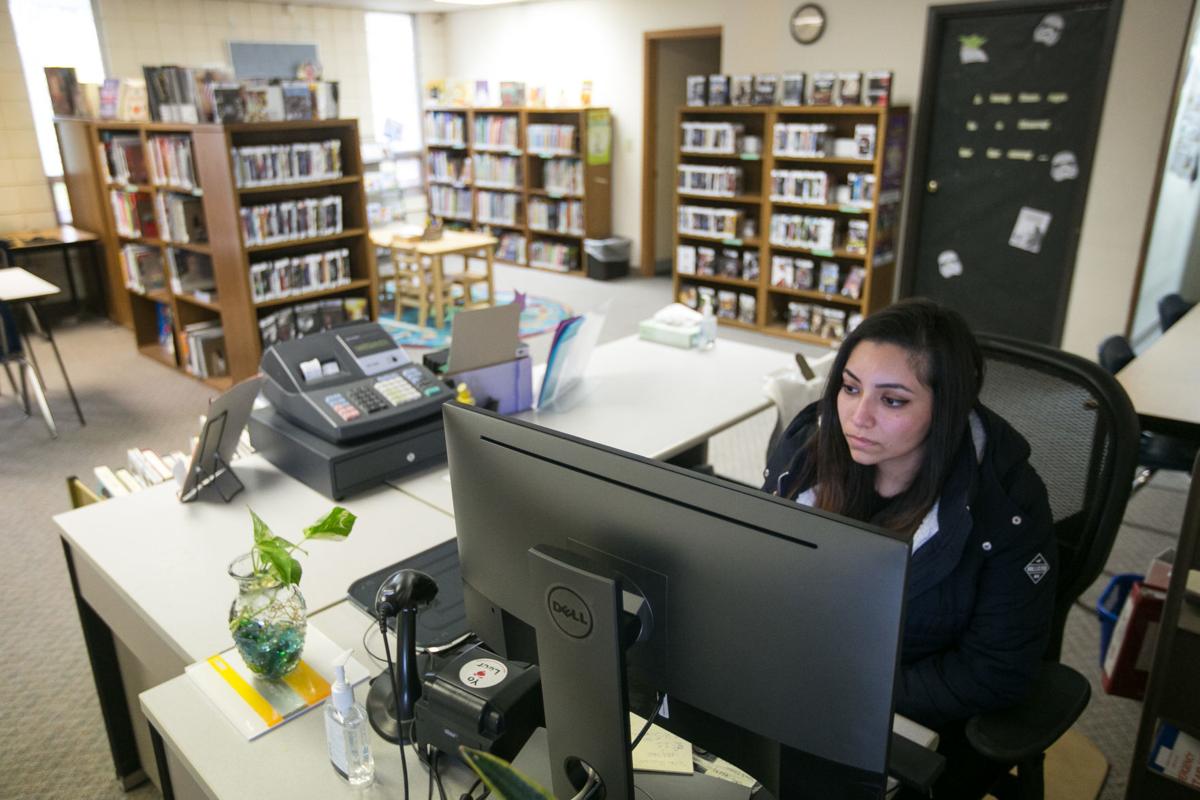 Marissa Sanchez, a Southeast Community Library supervisor, works at her desk Monday at the library at 1211 S. Seventh St. in Yakima, about 2 miles from Union Gap city limits. 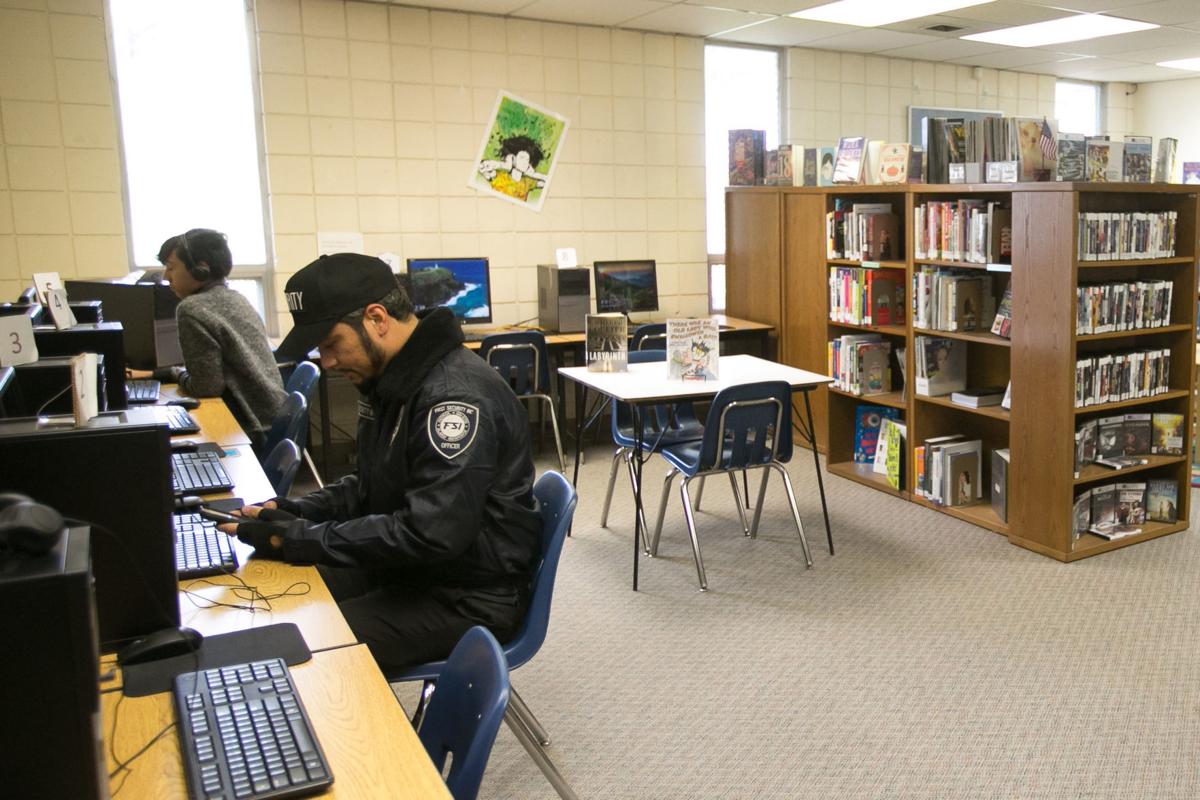 Gabriel Morales, right, works at a computer Monday at the Southeast Community Library. 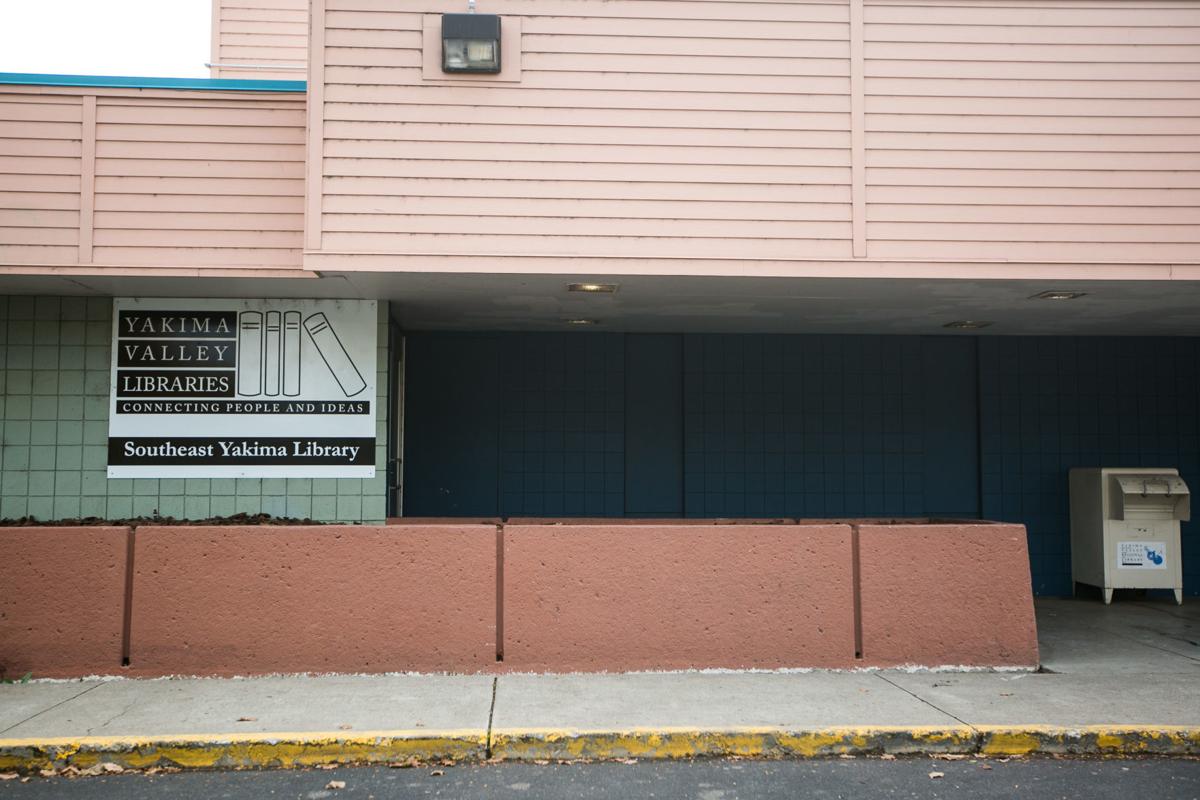 The Southeast Community Library at 1211 S. Seventh St. in Yakima.

Marissa Sanchez, a Southeast Community Library supervisor, works at her desk Monday at the library at 1211 S. Seventh St. in Yakima, about 2 miles from Union Gap city limits.

Gabriel Morales, right, works at a computer Monday at the Southeast Community Library.

The Southeast Community Library at 1211 S. Seventh St. in Yakima.

A proposition on the Nov. 5 ballot will partially determine the fate of a proposed library and community center in Union Gap.

A 6,000-square-foot building on the southeast corner of the Civic Center campus on Ahtanum Road would mark the return of a local library for the first time since the former library in the old City Hall building was razed in 2015 due to black mold.

The building will be paid for by city funds and a $2 million grant that state Sen. Jim Honeyford helped secure in the state’s capital budget, said City Manager Arlene Fisher.

City officials are proposing to pay for the library’s operations by annexing into the Yakima Valley Libraries district. Proposition 1 on the Nov. 5 ballot essentially asks voters to approve of paying the cost of being in the district.

If not, the library building’s size might be scaled back and the city could either contract with the district using city funds or find an alternate way to run the library, proponent Jack Galloway said. The City Council also could move to return the

In 2012, Union Gap dissolved a partnership with Yakima Valley Libraries dating to 1947 in anticipation of the building’s razing.

The city had always contracted with the library district, rather than annexing into it, Fisher said. Under this system, the city paid $114,000 in 2012 to provide the library services to its citizens.

After the dissolution of the contract, Union Gap paid $23,000 annually to make sure residents could access library cards and services without a charge. The closest location is the Southeast Community Library, roughly 2 miles north of Union Gap’s city limits.

Putting a library in the new City Hall building turned out to be cost-prohibitive, Fisher said earlier this year.

About a year and a half ago, the Friends of Union Gap Library and Community Center committee formed with the intent of constructing a new library, said committee spokesman Galloway, who is running unopposed for City Council Position 4 in the general elections.

The $2 million grant from the state made building the new library and community center possible, he said. The city is using more than $200,000 of its own funds to cover the remainder, and the levy is the “final goal” for sustaining the prospective library, he said.

It asks property owners to help pay the cost of services from Yakima Valley Libraries.

Yakima Valley Libraries — or not

Contracting with the district and annexing into it provide users the same services, said Kim Hixson, director of Yakima Valley Libraries.

These range from books to summer reading programs for kids, adult author readings and events like those organized at local branches this summer: a collaboration with the Pacific Science Center, 3D printing workshops or puppet shows, for example, said program and marketing librarian Krystal Corbray.

Most of the libraries the district serves are annexed members, excluding Tieton, Granger, Mabton and Naches, Hixson said. Annexing is more cost-effective for purchasing books, materials, IT and programming, she said. It allows money to be pooled into the district to serve all the libraries.

Annexation requires a library levy, versus a city paying a contracted cost to the library district. Currently, the maximum library levy rate statewide is 50 cents per $1,000 property value, Hixson said.

For Union Gap, which has a total assessed value citywide — including everything from corporations to homes — of roughly $809 million, that would mean a total of just under $353,000 being contributed to the library district annually, barring a change in assessed value, Fisher said.

Broken down by property owner per month, it’s a small price to pay, Galloway said.

“We compare it to a happy meal or a latte — one a month,” he said. “It’s not an expensive thing, but I think it will provide a tremendous benefit to the city.”

The library would serve the city’s population of roughly 6,100, and is expected to draw visitors from nearby places like Wapato and Terrace Heights, or visitors to the Valley Mall, about two blocks away.

“I look at it as a community asset,” Fisher said of the proposed library. “If we give our children the tools to be successful when they’re young, we deal with adults who are ready for the world that’s around them. If we don’t give the children the tools that they need, then we’re going to deal with them in other areas that may not be positive.”

Without the levy, the project would have to be dismissed or revised so that the city could redirect the roughly $200,000 in city funds currently proposed for the building development toward running the library.

Opponents say the levy is not the right way to pay for these services.

“As far as the library and the community center, I’m all for it,” said incumbent City Council member David Matson, who is running opposed for Position 5. “But I think we need to find a new funding source. … I don’t think the district is for us.”

Matson said the levy cost is too high and would be permanent once voted in. He worries that businesses, such as mall tenants or Costco, will respond by raising prices.

“That reflects a higher cost to people who shop at Costco and the mall,” he said. “You’re paying property taxes, then you go into the store and you’re paying a higher property tax again (in goods). I think the city can do a better job.”

Whether the levy passes or not, he said, the library will be built. Without it, he hopes to see the City Council find a different way to operate the library.