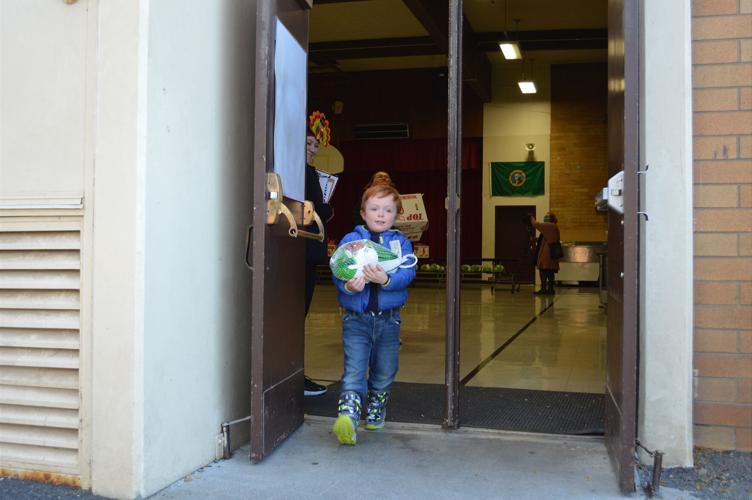 Daniel Betts, 6, struts out of the McKinley Elementary School auditorium with a frozen Thanksgiving turkey after the school’s annual turkey giveaway Friday, Nov. 18, 2022. The school gave turkeys to 49 households and will raffle away more. 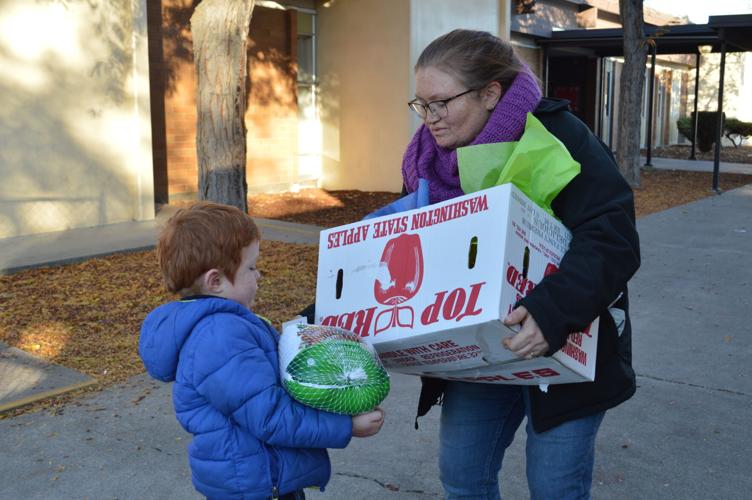 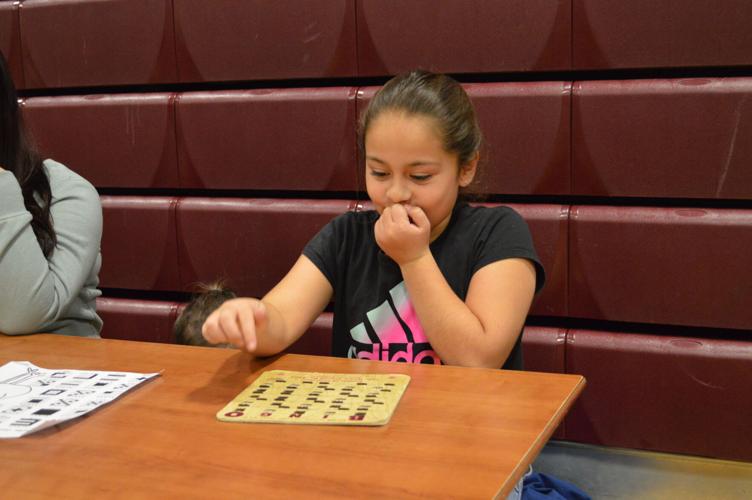 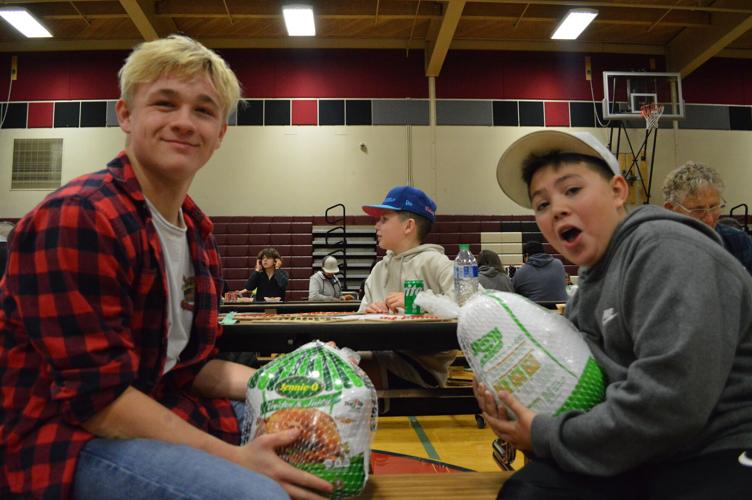 Anthony Field and Chase Wilcox pose with the turkey they won during a raffle at Turkey Bingo at East Valley Central Middle School on Thursday, Nov. 17, 2022. 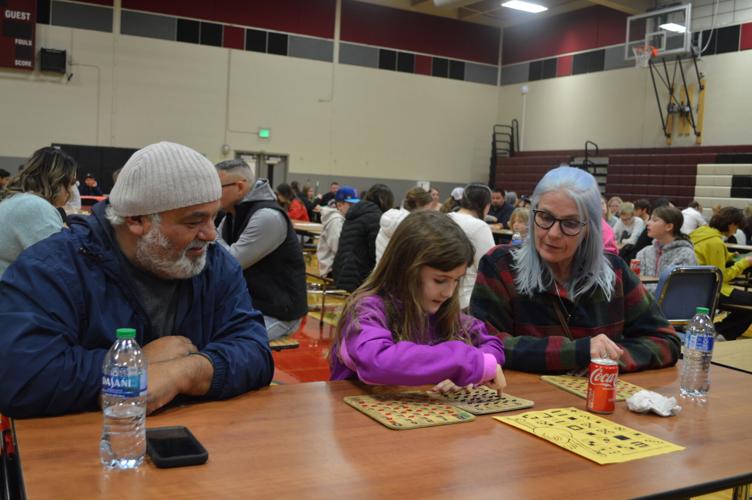 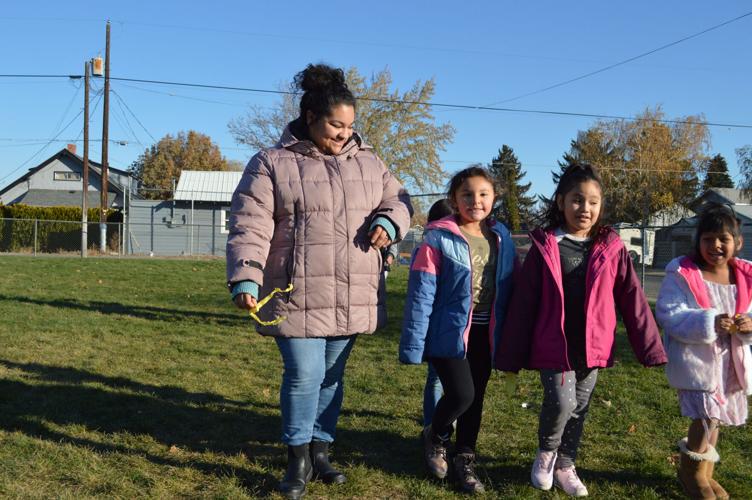 Daniel Betts, 6, struts out of the McKinley Elementary School auditorium with a frozen Thanksgiving turkey after the school’s annual turkey giveaway Friday, Nov. 18, 2022. The school gave turkeys to 49 households and will raffle away more.

Anthony Field and Chase Wilcox pose with the turkey they won during a raffle at Turkey Bingo at East Valley Central Middle School on Thursday, Nov. 17, 2022.

The guttural warbles of turkey calls reverberated throughout the East Valley Central Middle School gymnasium Thursday night. Turkey Bingo announcer and middle school art teacher Ken Weyrick is famous for his turkey calls, and some of the players decided to join in.

Turkey Bingo is a tradition in the East Valley School District. Players “buy” their bingo cards and raffle tickets by donating nonperishable food items, which are sent to a local food bank. Winners can get all sorts of prizes, including whole frozen turkeys to take home.

On the other side of the city, McKinley Elementary School gave away turkey dinners to nearly 50 families after its annual turkey trot. Even more turkeys will be raffled off to students.

As Thanksgiving nears, Yakima schools embraced fun ways to involve the community and give away turkeys.

Students and community members gathered in the EVCMS gym to try their luck at Turkey Bingo on Thursday night. It was the first in-person Turkey Bingo since the COVID-19 pandemic struck.

Those lost years mean there’s some debate over how many Turkey Bingos the school has put on, said teacher Madeleine Funk. Funk heads the leadership class that organizes the event together with the student government.

The tradition began 28 years ago, said Weyrick. He was the bingo caller that first year and has stuck around. He said he got involved because it was a community fundraiser.

A donation of five nonperishable food items could be exchanged for a bingo card and raffle ticket.

The parent organization also sold concessions as a fundraiser during the bingo game.

Bingo caller and paraeducator Debb Moser said she enjoys the fun energy of the night and seeing people’s reactions to winning.

Two of those were longtime Turkey Bingo players Michelle Dooley and Alaina Linden. Each had their bingo cards ready to go and brought children to play along.

“It’s just kind of been a tradition in our family since I don’t know when,” Dooley said.

The women were hoping to win prizes this year, especially the turkeys. But even if they walk away empty-handed, Linden said she enjoyed contributing to the food pantry.

“It’s nice to bring the donations and know that it’s going towards,” she said.

Funk said the night is all about the community coming together to help each other.

“These are community members who come in and share what they have and then we try to give it back to them,” she said.

Turkey Bingo night kicks off a food drive at the middle school that continues until the start of winter break, Hevland said. Funk said the students will try to match that amount in new donations in the coming weeks.

Each year the campaign raises about 3,000 pounds of nonperishable food items. The food goes to The Pantry at Moxee food bank, which is just up to road from the school.

In past years, three times as many families participated, said Principal Amanda Voorhees. But this was the first regular trot since the pandemic began.

As a result of the small crowd, for the first time ever the school had enough donated turkeys to give a full turkey dinner out to every family that participated. The school also had additional frozen turkeys and hams.

“I feel like Oprah,” Voorhees said. “Everybody gets a turkey dinner.”

The school also raffled off vouchers for full turkey dinners for parents to pick up at Maverick Cares for students whose parents couldn’t make it to the trot Friday.

As a tradition, the school participates in a turkey trot before giving out the turkeys. Parents and family members were invited to join students as they walked laps around the McKinley play yard.

K.C. Mitchell started the tradition in 2007, when he was principal at McKinley. Some of his office staff came up with the idea. Mitchell wore a turkey costume for the inaugural trot, he said.

“My favorite part is that we’re able to give back to our community, the local community,” Mitchell said at this year’s trot.

He also said it gives parents an opportunity to spend time at the school.

Griselda Chavez has two students at McKinley. She took time off work Friday to surprise them at the trot after her youngest child told her about it.

“I could tell she really wanted us out here,” said Chavez, who was joined by her mother, Griselda Silva.

The women said they enjoyed events like this because it gave them a chance to see their kids at school, the place where they spend most of the day.

And they appreciated the chance to win a turkey. Chavez joked that if it was a foot race, she would never win one.

The women walked away with full turkey dinners for each of their households.

Luminaria walk and letters to Santa in Yakima this weekend