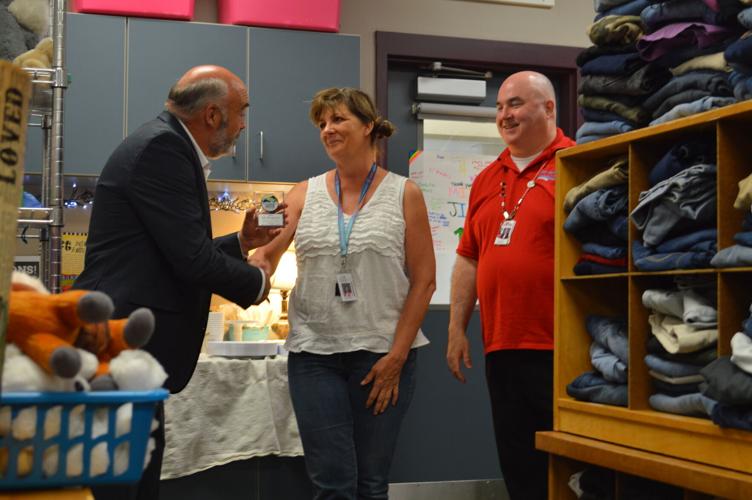 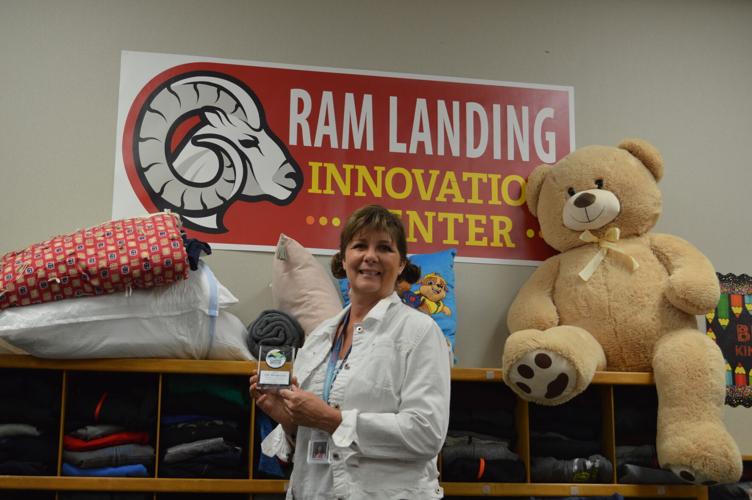 Jill Hendricks, the student and family engagement liaison for West Valley School District, poses with her award after winning 2022 Regional Classified Employee of the Year from Educational Service District 105 on Wednesday, June 15, 2022. She stands amid donated items she has collected for families in need.

A West Valley School District employee who works with students and families experiencing homelessness and other economic stress is this year’s Regional Classified Employee of the Year for Educational Service District 105.

Jill Hendricks, a student and family engagement liaison for the West Valley School District, was honored with the award Wednesday. Hendricks was instrumental in developing Ram Landing, a pantry where families in need can access food, clothing and other donated items that opened in last fall. She started the pantry after the number of students experiencing homelessness nearly doubled during the 2020-21 school year, according to a news release from ESD 105.

In her daily work, she helps families access housing, employment and other necessities, the release said.

ESD 105 Superintendent Kevin Chase presented Hendricks with the award at Ram Landing Wednesday morning. A panel of judges made up of educators and community members made the selection.

“Jill spends her career serving the most needy children in West Valley,” he said. “Without her and without this kind of effort, those kids would come to school not ready to learn or not come to school at all.”

Several of her co-workers were there to join in on the surprise, including West Valley School District Superintendent Peter Finch. He described Hendricks as “a woman on a mission.”

Hendricks said she was excited to share her vision with other schools and increase West Valley’s outreach. She takes a whole family approach to her support work, since parents and kids feel the stress of economic hardship.

“It’s just a very fulfilling job, to help people,” she said. “And I think in looking towards the future, I just see us being able to help more families.”

The award came as a surprise, she said.

West Valley family engagement coordinator Minerva Pardo nominated her colleague for the award. She admired the way Hendricks transformed the district’s donation distribution process. She said donations used to be kept in a warehouse. Now, the bountiful donations of clothing for all ages, toys, games, furniture, hygiene supplies and food take up two rooms at the district’s Innovation Center.

“She moved everything from boxes in a warehouse to this,” Pardo said, standing amid racks of clothes and stacks of other goods. “That was the beginning.”

Pardo said the new setup is much more welcoming to families and students have embraced it. She even heard a young student excited to go “to the store” the other day. Ram Landing is meant to feel more like a shopping experience than charity.

People are able to take whatever they need from the store and are encouraged to bring in any items they do not need as donations.

Before she was hired by the district in 2016, Hendrick worked for many years as a parent volunteer. Since then, she’s worked as a paraeducator and a family liaison, the release said.

ESD 105 provides support services to schools and school districts in Yakima and Kittitas counties and parts of Grant and Klickitat counties.