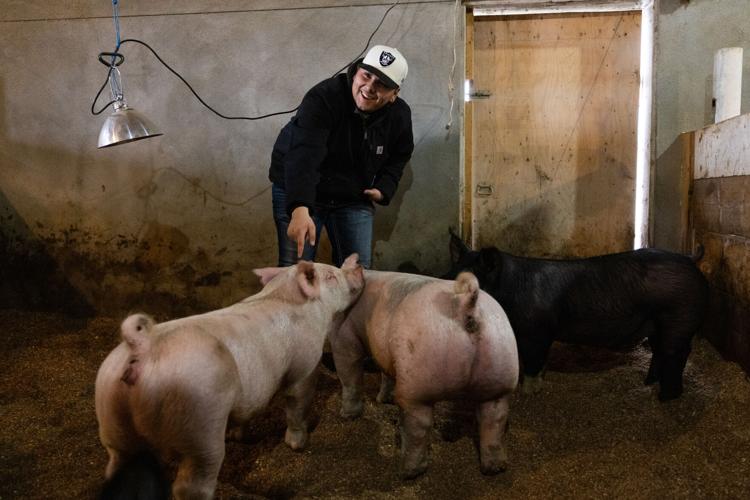 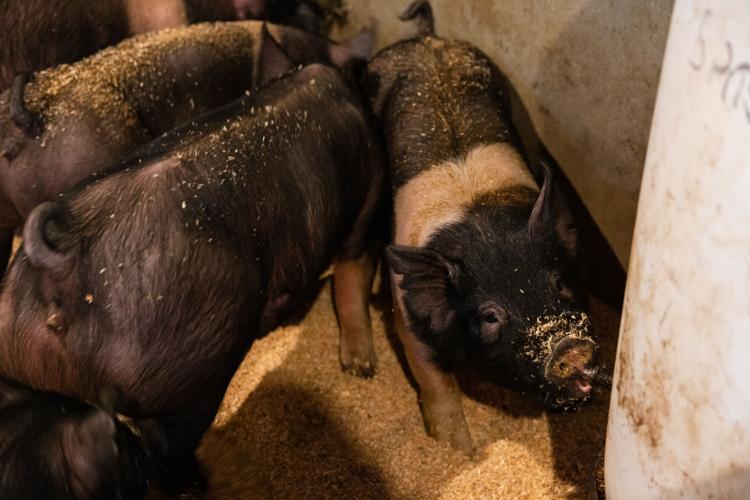 A pig drinks water in a pen inside the FFA barn at White Swan High School in White Swan, Wash., Wednesday, Jan. 18, 2023. 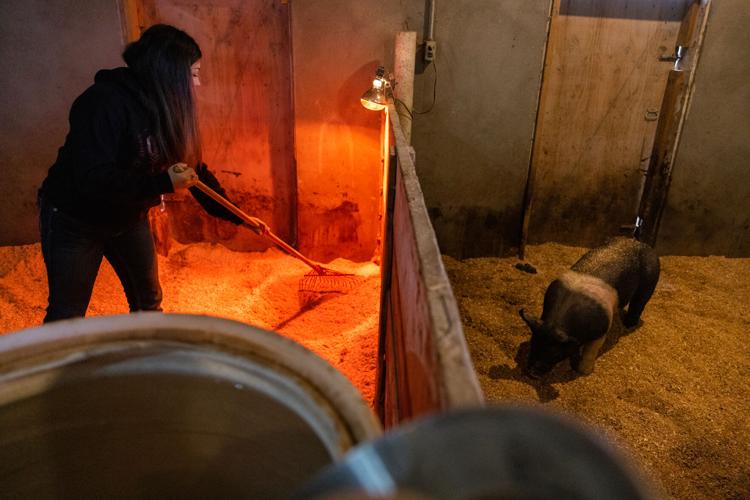 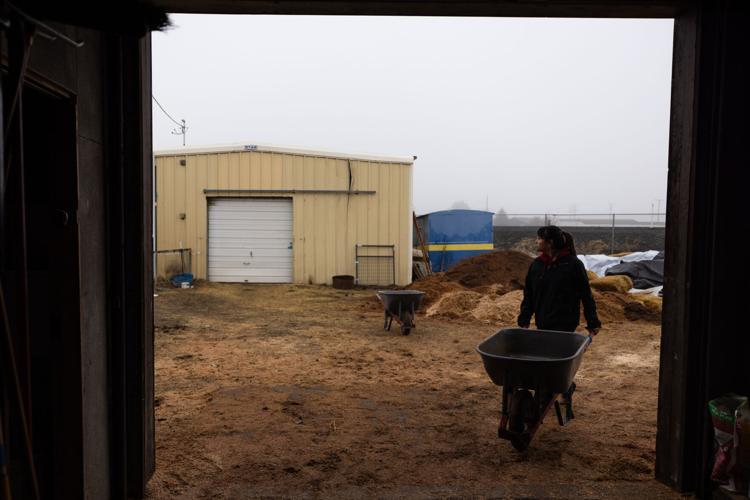 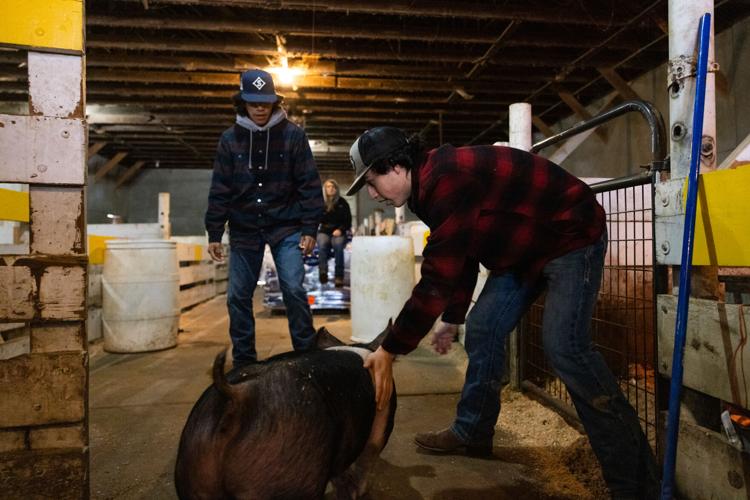 Braden Blodgett moves a pig into a pen after it was weighed at White Swan High School in White Swan, Wash., Wednesday, Jan. 18, 2023. 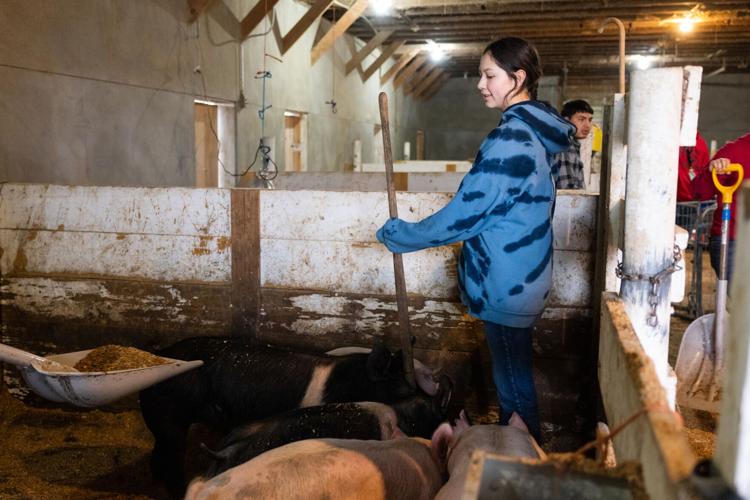 A pig drinks water in a pen inside the FFA barn at White Swan High School in White Swan, Wash., Wednesday, Jan. 18, 2023.

WHITE SWAN — With only one door open to the foggy January day, the sounds — and smells — of 25 pigs circulated throughout the small, faded white barn on the edge of White Swan’s High School’s campus Wednesday. About 20 FFA students added to the cacophony.

A boy climbed over the wooden sides of the pen and slapped the side of a hog good-naturedly as he waited to weigh it. “Good man,” another student told a pig as it walked onto the scale without protest. A third inspected his shoe after a pig nibbled on it before he left for his next class.

Though raising livestock is nothing new for many students in the Yakima Valley, the pandemic and subsequent remote schooling complicated things. At White Swan, students who had been raising pigs in 2020 had to find ways to house or sell them when the pandemic canceled the annual livestock show, said junior Danner Deane.

Hands-on livestock care opportunities returned to WSHS this year with the arrival of 25 show pigs in November. FFA and agricultural science classes, along with other career and technical training, have proved to be popular ways to engage students in the years following the start of the pandemic.

About 25 FFA students were involved in raising the pigs. The students come after school three times a week to look after the animals. On Wednesdays, which WSHS has dedicated for enrichment classes and course recovery, students come in for about two hours in the morning. During that time students fill the feeders and water holders, clean the pens and put in fresh sawdust.

Deane said he got involved in FFA because it was “something to do.” He’s raised pigs and cattle before.

Senior Triston Ryan said that while raising the pigs, he was surprised by how much they eat and how fast they grow.

The pigs were 30-50 pounds when they arrived, Deane said. By January they were averaging around 150 pounds. Ideally, the pigs will weigh from 250 to 290 pounds by the time they head to market in May, Grooters said.

The students will present and try to sell the pigs at a livestock show in Toppenish this spring. The pigs will go to the highest bidder. Grooters said buyers look for pigs that will produce high-quality cuts of meat and who obey their trainers.

Obedience does not come naturally to all pigs. As the students attempted to guide each pig into a wire metal cage with a scale on the bottom, some of the swine defied orders. One large pig nosed a smaller one out of the cage. He apparently wanted to be weighed first. Another particularly stubborn pig squealed in protest as the students and Grooters attempted to get all four of its hooves on the scale.

Pig training is a lot like dog training, Grooters said. Soon, the students will start leading them on walks in the yard near the barn, teaching them to trot with their heads held high and follow commands.

Once the pigs are sold, Grooters said, they will most likely end up on someone’s plate.

Each show pig costs around $150 to $400 to purchase, depending on a number of factors, Grooters said. The class estimated each pig would require between $400 to $500 worth of feed during the season, said paraprofessional Zach Tenney.

Like most food, the cost of pig feed has gone up in recent years, Tenney said.

The Mt. Adams School District received a $5,000 grant from AgWest Farm Credit at its Wednesday night school board meeting. The money will be used to buy pig feed.

Brandon Nickels, a manager at the company’s Yakima branch, said he heard the school’s ag education program took a hit during COVID. Credit officer Marshall Patton reached out to school officials and urged them to apply for the rural community grant.

The grant is available to local schools for use in agriculture or finance education, according to AgWest’s website. Patton urged other local school staff to reach out and see if they would be a good fit.

FFA and other ag education classes are a part of the school’s career and technical education program. The courses are popular with students, and the school considers hands-on learning opportunities to be valuable in keeping kids engaged post-pandemic, said WSHS Vice Principal Gerry Muller.

Engaged students are less likely to be absent, Muller said. WSHS staff are determined to increase attendance and graduation rates, so much so that the school retooled its schedule to devote Wednesdays to classes that engage students and help them make up credits.

“It gives a lot of kids the opportunity they wouldn’t have at home,” Grooters said.

The space, time and money needed to raise even a single pig would be unfeasible for many students.

Agriculture is a driver of Yakima’s economy. Grooters said the demand for laborers and veterinarians are high within the industry. Muller said several of the school’s CTE courses, like welding and construction, train students so they are ready to enter the workforce right out of high school.

Several FFA students said they were not interested in pursuing agriculture as a career. But they appreciated the lessons they learned by raising pigs, particularly responsibility. Deane said that’s a skill that he can use in whatever job he pursues.

Vanessa Ontiveros is the education reporter at the Yakima Herald-Republic. She grew up near Los Angeles but has happily made Yakima her new home. She is passionate about reporting stories that serve the community and highlight various aspects of the educational system.She also hosts a podcast that discusses local arts education, Yakima Arts Talk, available on Spotify and Apple Podcasts. The daughter of two longtime public school teachers, she is always looking to include community voices in her work.