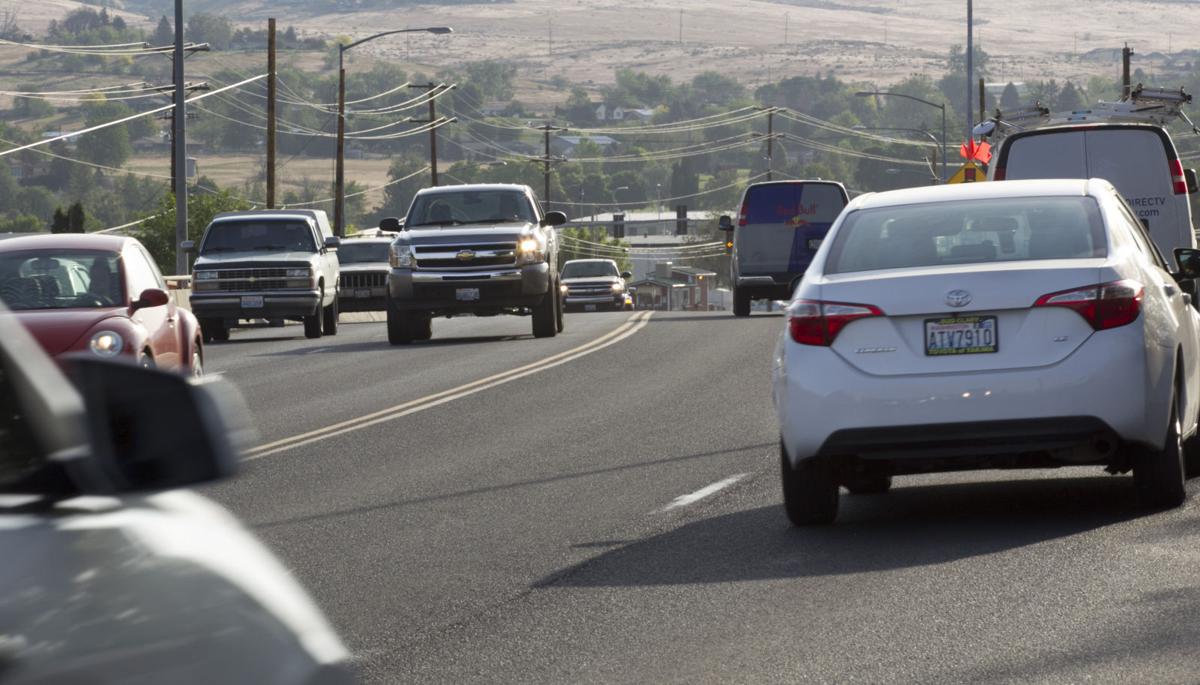 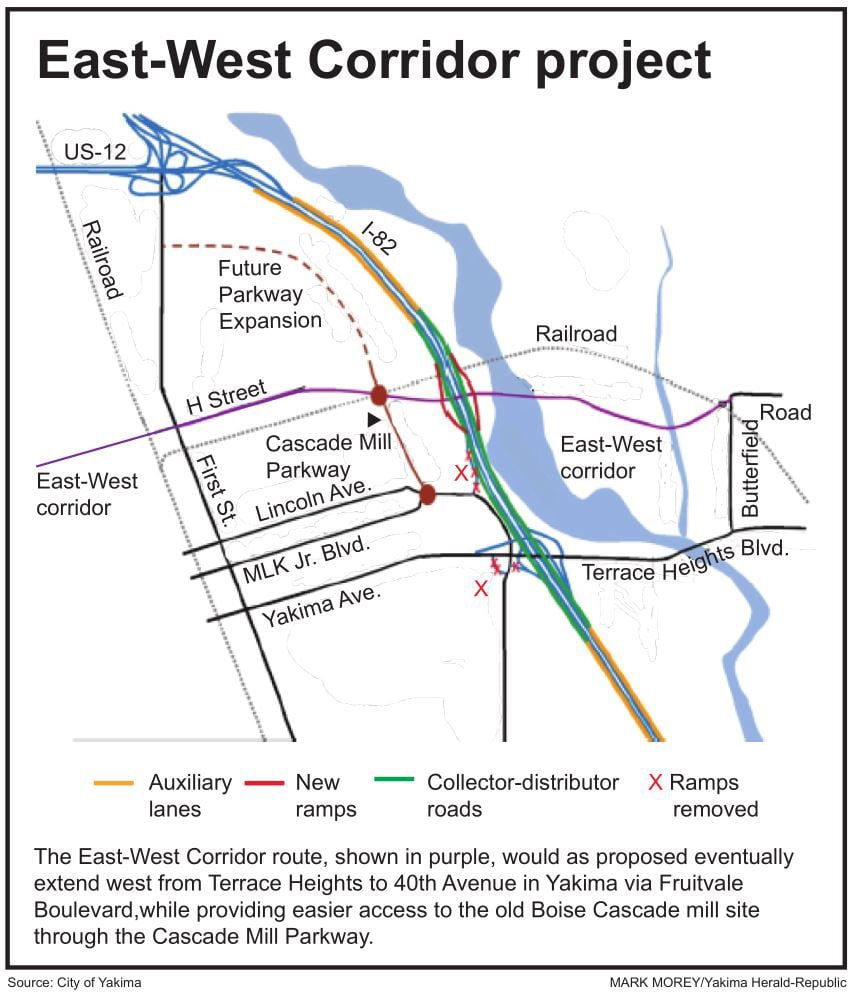 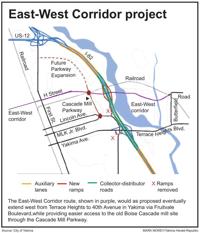 After more than a decade of talk, a plan to construct a massive corridor to improve traffic flows across Yakima by connecting Terrace Heights to 40th Avenue is gaining some traction.

Officials with the city of Yakima, the state Department of Transportation and commercial developers and real estate brokers are behind the project known as the East-West Corridor. The corridor, a newly paved multilane road, eventually would establish a direct route across the city while providing easier access to the former Boise Cascade mill property and Terrace Heights.

“We simply need to acknowledge that for this community to remain vibrant, the East-West Corridor is vital,” said Yakima County Commissioner Mike Leita.

Lawmakers in Olympia are working on a new transportation package, and the Senate’s $15 billion proposal earmarks more than $165 million for the first phase of the project that also would establish a second arterial into Terrace Heights, add additional lanes to Interstate 82 between U.S. Highway 12 and Yakima Avenue and an exit ramp into the former Boise Cascade mill property.

The first phase of the corridor project alone will cost about $114 million while another $50 million would pay for the additional I-82 lanes and corresponding exit ramps.

A transportation proposal in the state House does not specifically earmark money for the East-West Corridor, but rather leaves money on the table to be divided among unidentified projects later.

Sen. Curtis King, R-Yakima, chairman of the Senate Transportation Committee, said he’s confident that Yakima’s project along with several others listed in the Senate’s proposal will make it into the final package.

“I think it’s something that’s going to happen,” King said in a recent telephone interview. “I’m going to do my darndest to make sure that most, if not all, of those projects are in there.”

Primarily, the corridor is needed to take pressure off Terrace Heights Drive and East Yakima Avenue, where county engineers say traffic is beyond maximum capacity and the roads are in poor condition.

Meanwhile, state transportation officials are concerned about local traffic using I-82 just to get across the city, clogging lanes between Highway 12 and Yakima Avenue.

Proponents say the corridor not only would improve traffic flows, but also invite commercial development by improving access to what is hoped will be the redevelopment of the former Boise Cascade mill property, which is arguably one of the most important economic development projects on the city’s radar.

But as vital as officials say the project is, the Senate’s package comes with a price — an 11.7-cent-per-gallon increase in the gas tax, which is now 37.5 cents. The proposed increase would ramp up over three years — 5 cents the first year, 4.2 cents the second and 2.5 cents the third.

“If we are to embrace (improving) infrastructure, then we must support the necessary funding to make those improvements happen.” Leita said.

Connecting Terrace Heights to 40th Avenue in west Yakima won’t happen overnight. Such a large project would require a series of construction phases over a decade. In the first phase, the corridor would be built north of Terrace Heights Drive, from Butterfield Road to North First Street in Yakima. Bridges would be erected over the Yakima River and I-82, and the corridor would run through the old mill site.

A roundabout the city plans to install next month on Fair Avenue near Bob’s Burgers and Brew ties into the corridor. The city is using a county Supporting Investments in Economic Diversification grant to fund the $2.5 million roundabout, which will access the mill property and eventually tie into the corridor.

From the roundabout, the corridor would jog to the north and follow H Street to First Street.

Work to improve I-82 also ties into the corridor. Two additional lanes on the interstate called collector-distributor lanes would be built, one in each direction, between Highway 12 and Yakima Avenue.

Motorists would use those lanes to access the corridor, Fair and Yakima avenues and Terrace Heights Drive. That configuration would allow interstate traffic in the two main lanes to flow unimpeded through the area, said Brian White, DOT’s assistant regional administrator for construction and development.

Daily traffic through that stretch of the interstate now averages about 48,000 vehicles, and that is expected to jump to more than 68,000 over the next 20 years, a figure that matches travel over Snoqualmie Pass during a holiday weekend, he said.

Much of the traffic is generated by local drivers using Highway 12 and I-82 just to get across town, White said.

“What’s interesting about Yakima is we have two highways that go around the city and kind of serve as a local network,” he said. “It really puts a strain on the system.”

If the project makes it into this transportation package, work on the first phase could begin as early as 2017, said Yakima County Engineer Gary Ekstedt.

The entire project, which would extend the corridor to 57th Street in Terrace Heights and 40th Avenue in Yakima, wouldn’t be complete until 2030, he said.

Extending the corridor in Terrace Heights from Butterfield and Keys roads to 57th Street will be the county’s responsibility, Ekstedt said.

So far, the county and city have already spent nearly $2.3 million on planning over the past four years, he said.

“We’re committing local dollars up front to put meat on the bones of this project,” Ekstedt said.

Proponents say construction of the first phase of the project would spark development at the former mill property, and foster additional development in Terrace Heights.

The former mill site consists of roughly 250 acres in clear view of I-82. “That land will develop,” Ekstedt said.

And to the east in Terrace Heights, Brig Temple, whose family provided property for the construction of Pacific Northwest University College of Health Sciences, recently sold the school an additional 21 acres for planned expansion. Enrollment at the school on University Parkway has nearly doubled from 70 students admitted when it opened in 2008 to 135 students now. Growth in enrollment is expected to continue as the school expands its offerings.

The Borton family is constructing apartments near the school to accommodate expected growth in enrollment. And Temple is developing 14 acres for retail shops on Terrace Heights Drive to serve that area as well.

“The school, they’re looking at a lot of growth out there,” Temple said. “It’s a huge economic engine that’s landed in Yakima.”

Temple also is building business offices on 8 acres near Inspiration Drive in a business park. Within three years, he plans to build a small grocery store that would serve the area.

There’s room for more residential development near the top of the hill in Terrace Heights, he said.

Bill Almon Jr., owner of Almon Commercial Real Estate, has first-hand experience with poor traffic flow in Terrace Heights, where his office once was located.

“We used to work out in Terrace Heights and traffic was terrible,” he said.

Commissioner Leita knows what building a road can do for an area. He was a major contractor on the construction of 40th Avenue back in the early 1970s.

“And there was nothing along 40th Avenue except for marginal fruit orchards,” he said. “When we built it, it took years to develop. But I think we will see the same thing along the East-West Corridor.

“I’m a believer in infrastructure: Build it and they will come.”

YAKIMA, Wash. -- Construction work on a massive thoroughfare connecting Terrace Heights to West Yakima could begin next year, thanks to a $700…