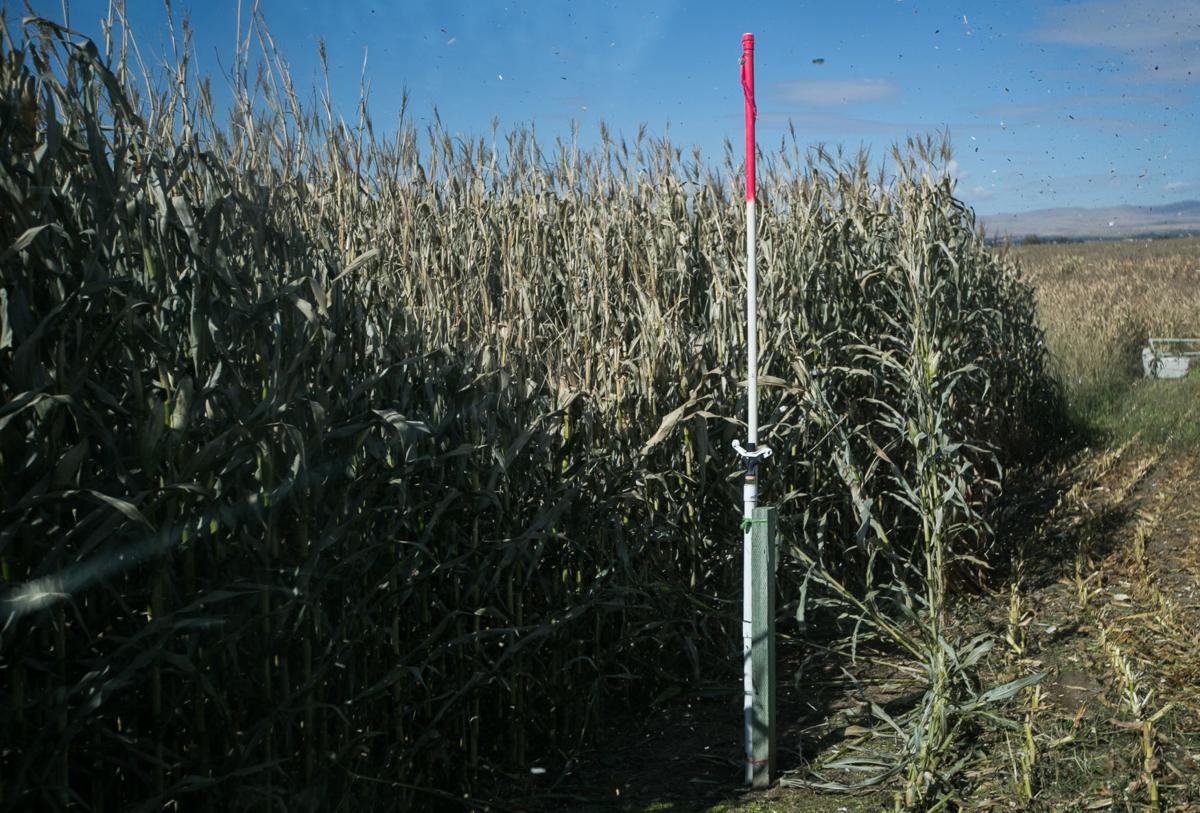 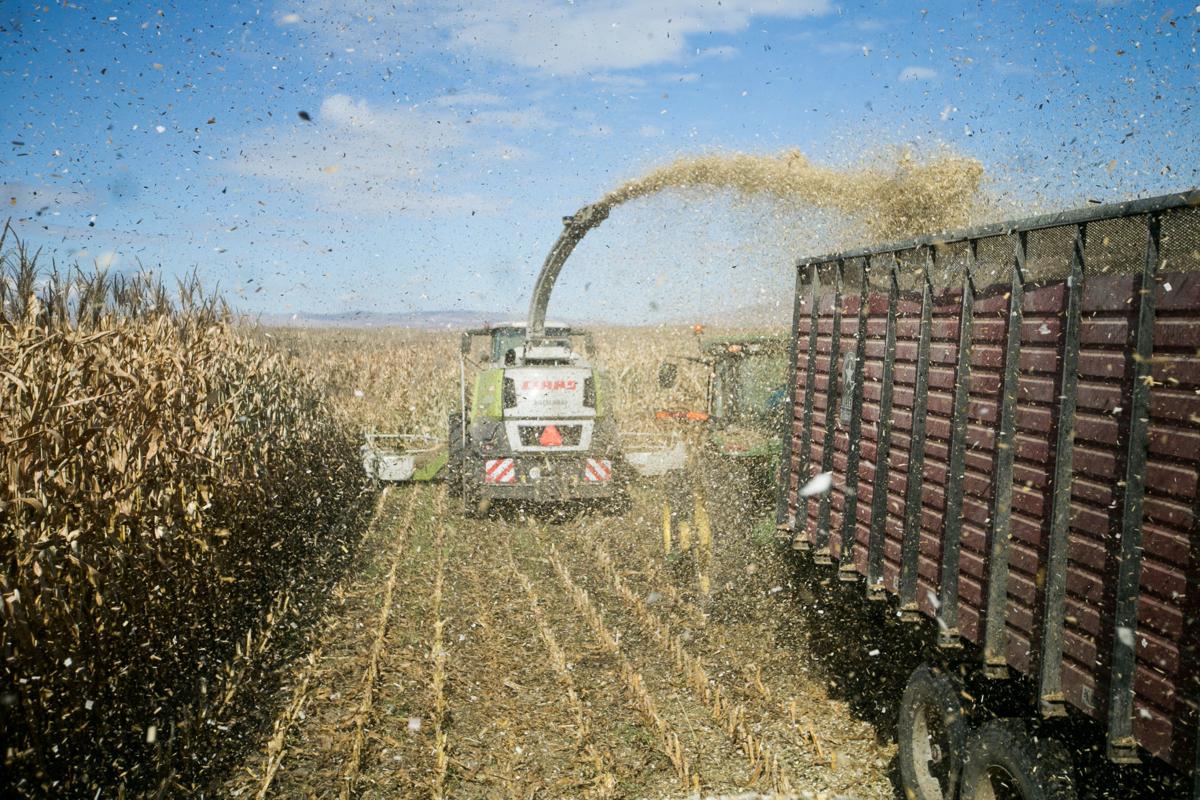 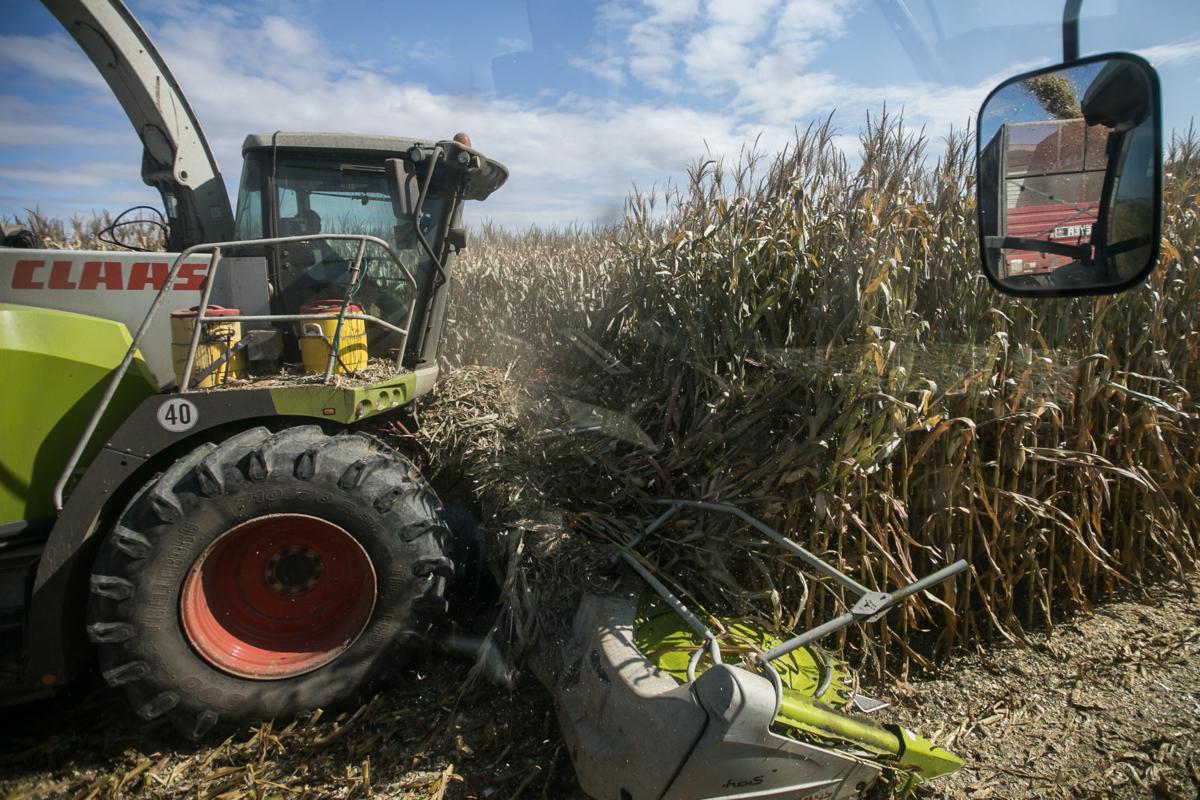 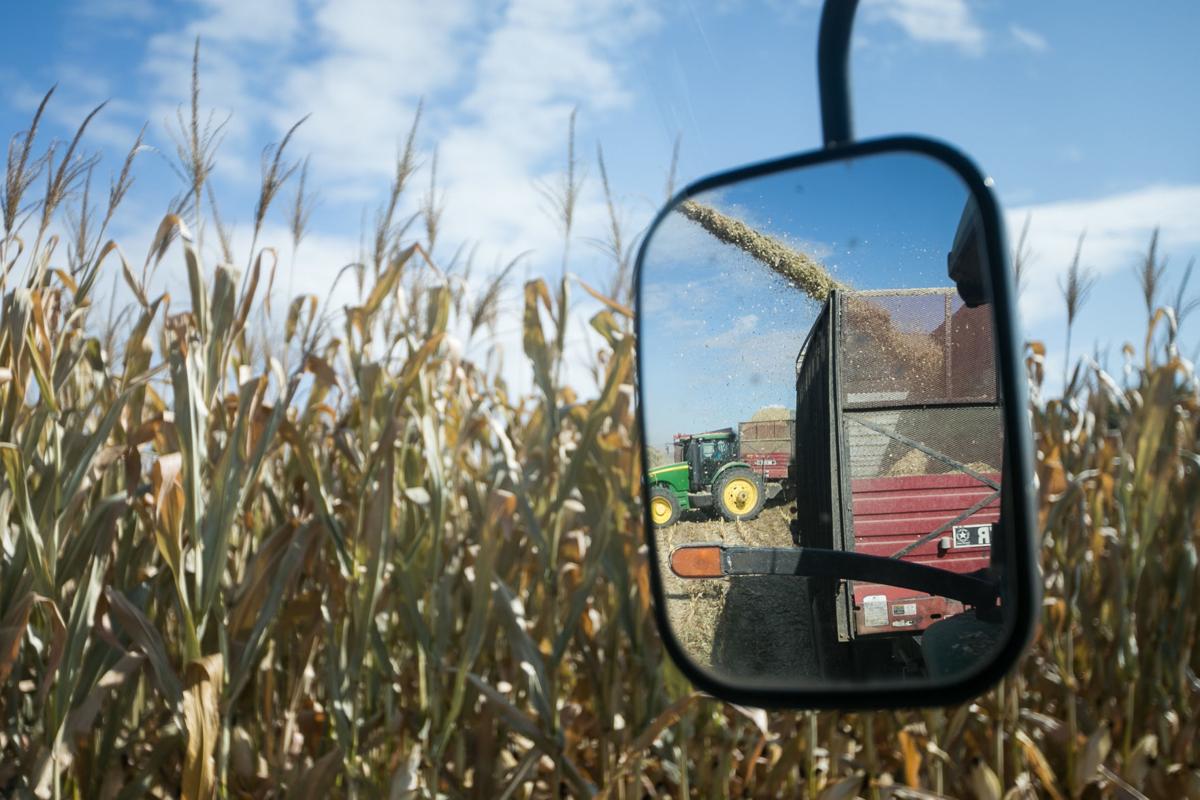 Silage is collected in a tractor-hauled cart at Jason Shehan’s corn field Thursday in Sunnyside. 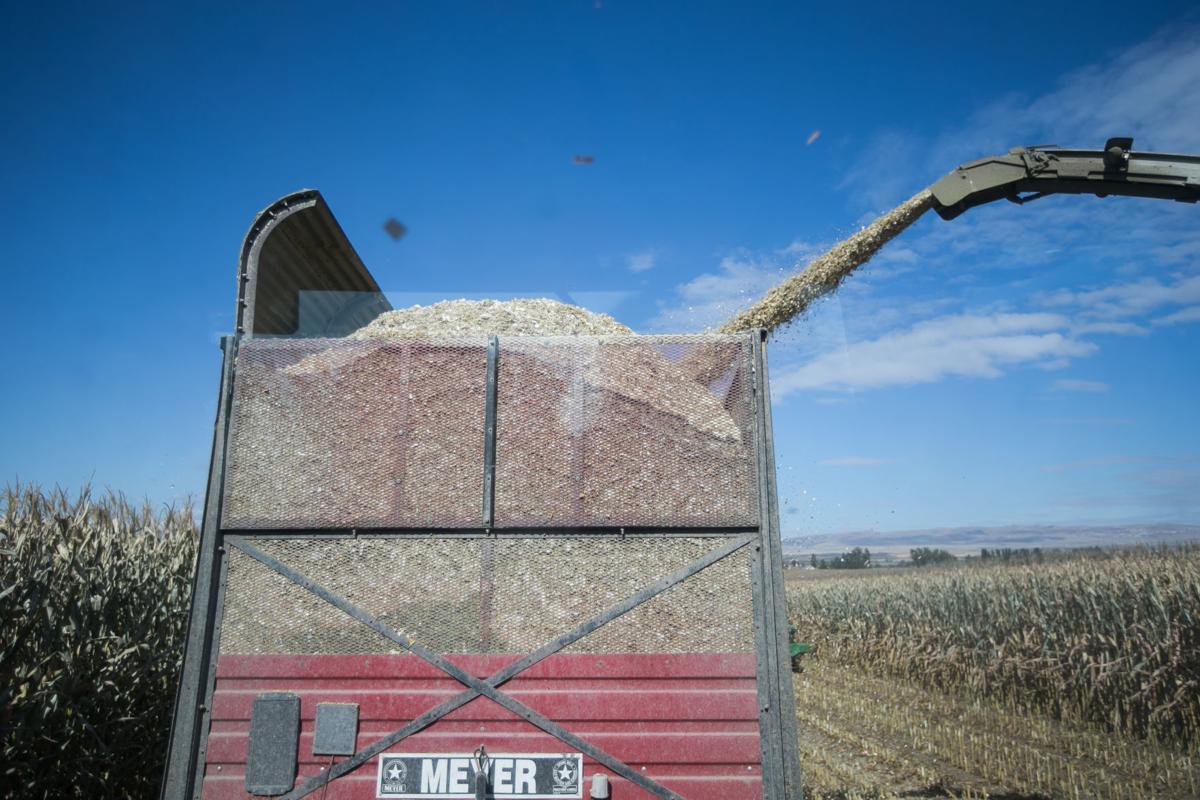 Silage is collected in a tractor-hauled cart at Jason Shehan’s corn field Thursday, Oct. 3, 2019, in Sunnyside. 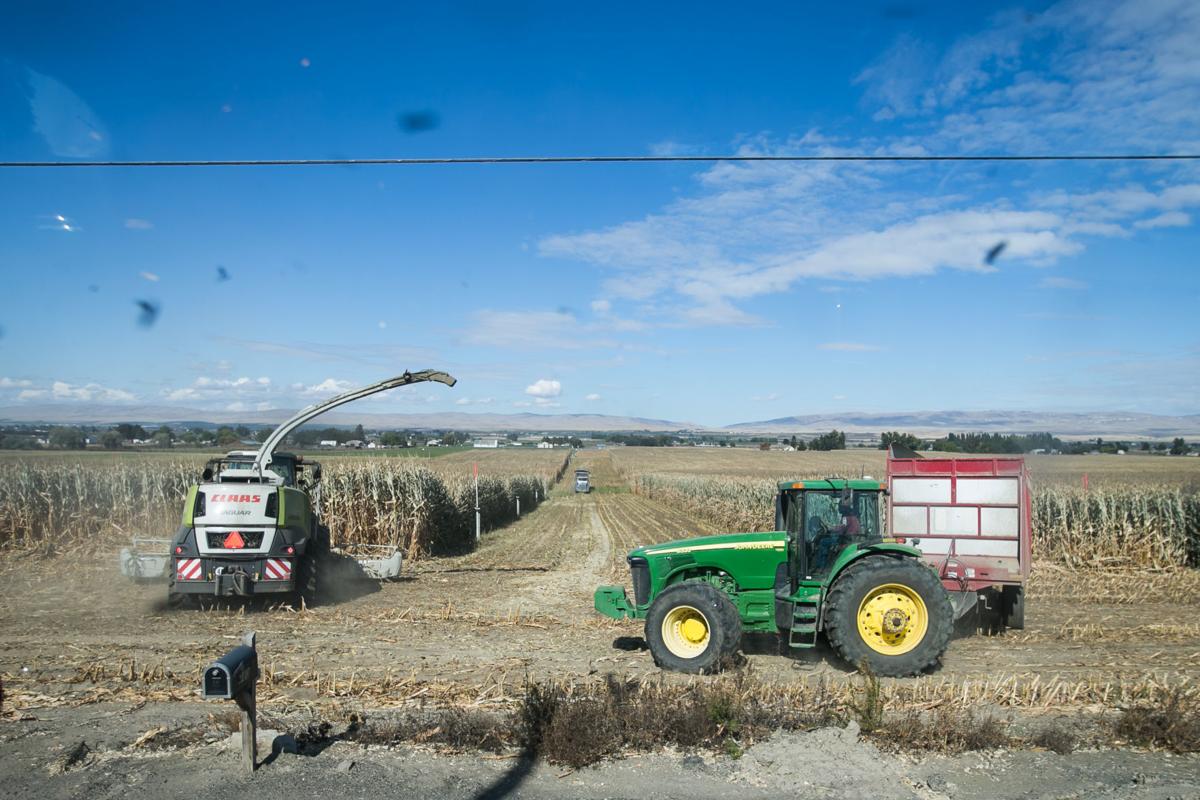 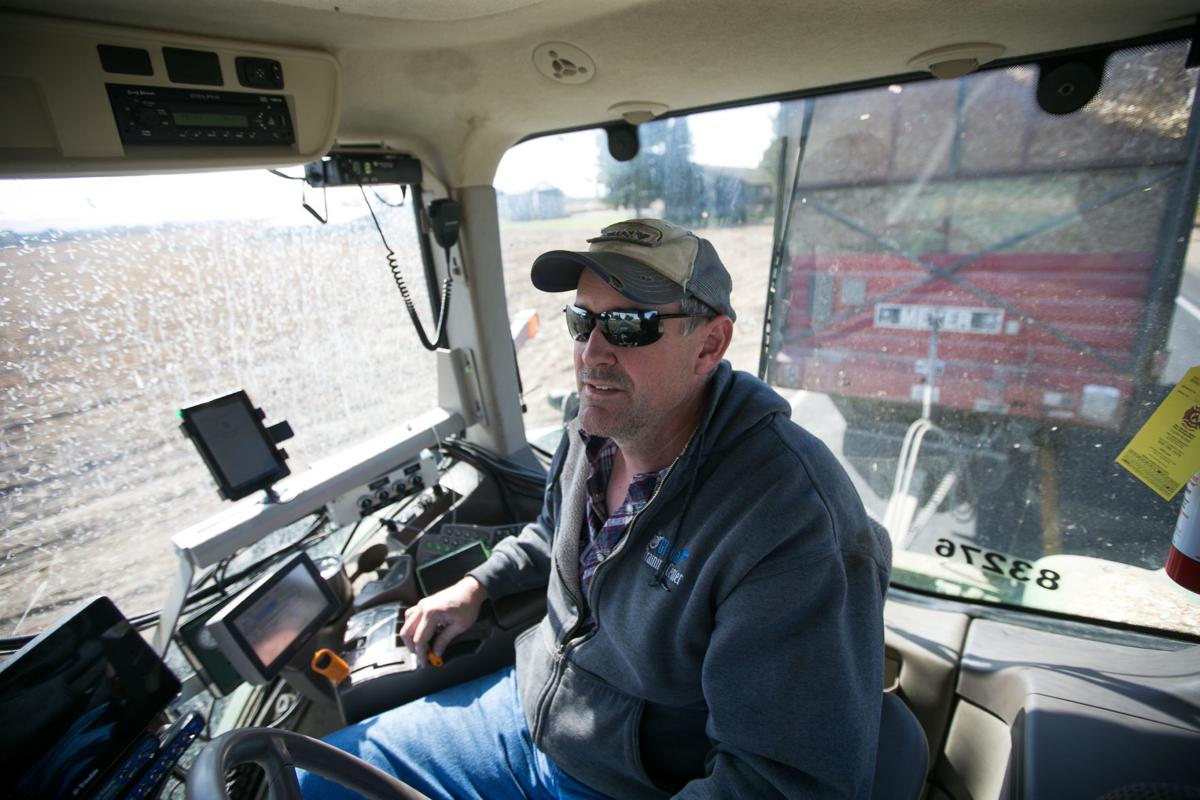 Jason Shehan pulls a cart full of silage with his tractor to a scale house Thursday in Sunnyside. 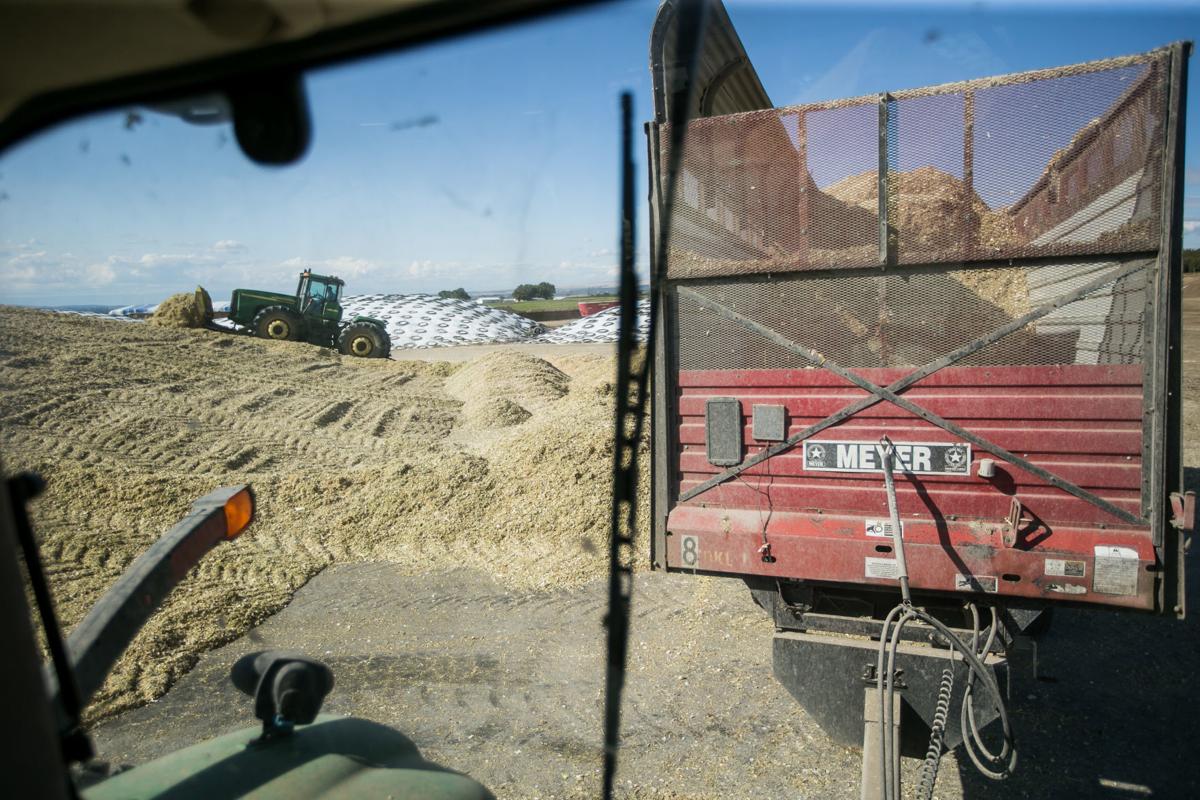 Silage is packed in a mound for fermentation at Jason Shehan’s dairy farm Thursday, Oct. 3, 2019, in Sunnyside.

Silage is collected in a tractor-hauled cart at Jason Shehan’s corn field Thursday in Sunnyside.

Silage is collected in a tractor-hauled cart at Jason Shehan’s corn field Thursday, Oct. 3, 2019, in Sunnyside.

Jason Shehan pulls a cart full of silage with his tractor to a scale house Thursday in Sunnyside.

Silage is packed in a mound for fermentation at Jason Shehan’s dairy farm Thursday, Oct. 3, 2019, in Sunnyside.

As 2019 draws to a close, farmers in the Roza Irrigation District say they have scraped by in a year that started out with low reserve levels — and they’re hoping 2020 is better.

In October 2018, the Yakima River Basin’s reservoir system had below-normal water levels. That winter, mountain runoff was also less than normal, as was snowfall in the Cascades.

This had a disproportionate effect on irrigation districts.

The Roza Irrigation District is a junior water rights district. The allotments of those who claimed a right to use water after May 10, 1905, can be scaled back or cut off entirely to ensure senior rights holders get their full share.

In Roza, projected distribution throughout the year reached lows of 67 percent of the district’s normal allotment.

But because of the district’s early restriction of distribution, it was able to make it to October without leasing extra irrigation water. The district also activated a series of pumps that absorb water that seeps from the system and pumps it back into the canal, he said, retaining several hundred acre feet of water.

“(We) put it in the category of ‘every bit helps,’” Revell said.

Since 2015, when the Yakima Valley faced a severe drought and water shortage, Roza has spent about $10 million of district grower money to lay roughly 40 miles of ground pipe — part of a 400-mile piping plan to preserve water expected to be complete in 10 years, he said.

In the meantime, Revell said the district expects to cut the irrigation season short by one week this year, ending on Oct. 15, rather than Oct. 20.

Three Roza Irrigation District farmers provided updates on how they have fared with the water allotments.

Dairy farmer Jason Shehan of Sunnyside is harvesting roughly 1,000 acres of corn this month, which he grows primarily to feed his 6,000 cows in the Roza and Sunnyside water districts.

The farmer said he was still irrigating alfalfa crops and a small amount of wine grapes, but the corn accounted for the majority of his crops, meaning his water use had already been cut down significantly going into October.

Shehan said lower-than-expected temperatures through the summer had helped him make it through the season largely unscathed. But it would not have been possible without having coordinated with a group of Roza farmers to alternate water use and keep the canal level constant, he said.

“We made it through the year pretty well,” he said. “Late-season water is not as helpful as early-season water, but that’s just how it goes. It’s hard to know what Mother Nature is going to do.”

“Let’s just hope to have a good winter, precipitation, so we don’t have to have these kinds of conversations next year,” he added.

Rob Valicoff and his brother collectively grow 1,500 acres of fruit.

While Valicoff said he has a backup well in case district water runs out, he had not had to use it this year due to mild weather. By the start of October, he said, they had mostly made it to the end of their irrigation season.

“We’re pretty much done irrigating for the year,” he said. “I’ve taken all the water off the grapes about 10 days ago.”

Some late varieties of apples might get a light rinse if temperatures are high, he said.

At the end of September, he had already started to see snow in the foothills near his property.

“Let it snow up in the mountains,” he said, noting a need for mountain runoff in the coming water year. “Keep it coming.”

In July, Archie den Hoed predicted that he would need to bite the bullet and spend the money necessary to pump well water and irrigate his 180 acres of grapes and apples in Grandview.

But as the irrigation season draws to a close, den Hoed said he hadn’t needed to use any mitigation water to get through the year — although he was maxing out his allotment with post-harvest irrigation.

Den Hoed said he had made it through the season due to water-efficient drip irrigation systems and the cool summer temperatures.

But he said an early onset of cold weather in October could impact late harvest of grapes and apples. He said two or three of his late varieties would likely be ready for harvest in November.

“We can’t harvest crops when they’re wet,” he said. “Any time it rains, it stops harvest of grapes and apples, and you have to wait for them to dry out.”

Moisture on grapes can decrease the sugar content, which ultimately impacts alcohol content. Some apples can also bruise if they are picked while wet. Frosty weather can have a similar impact, he said.

While the early onset of cool weather brought concerns, den Hoed said it also made him hopeful about the coming water year.

“We don’t like this kind of weather this time of year. It would be nicer if it would wait until November when everything is done,” he said. “But on the other hand, it is good that we’re getting an early start on precipitation up in the mountains (above) the storage.”

“The storages are fairly depleted, and we need to build them back up,” den Hoed added.

Revell agreed that just as the current water year began, the new year is expected to start with below-normal water levels in the Yakima River Basin’s reservoir system.

“There will be less water storage carrying into the winter, so that’s something that we keep an eye on,” he said.

Whether this will mean a repeat of the reduced levels going into next irrigation season remains to be seen, Revell

“It depends on how much rain and snow we get between now and April,” he said. “(We’re expecting) cooler weather patterns over the next couple months, so that provides some optimism. But it’s got to materialize.”