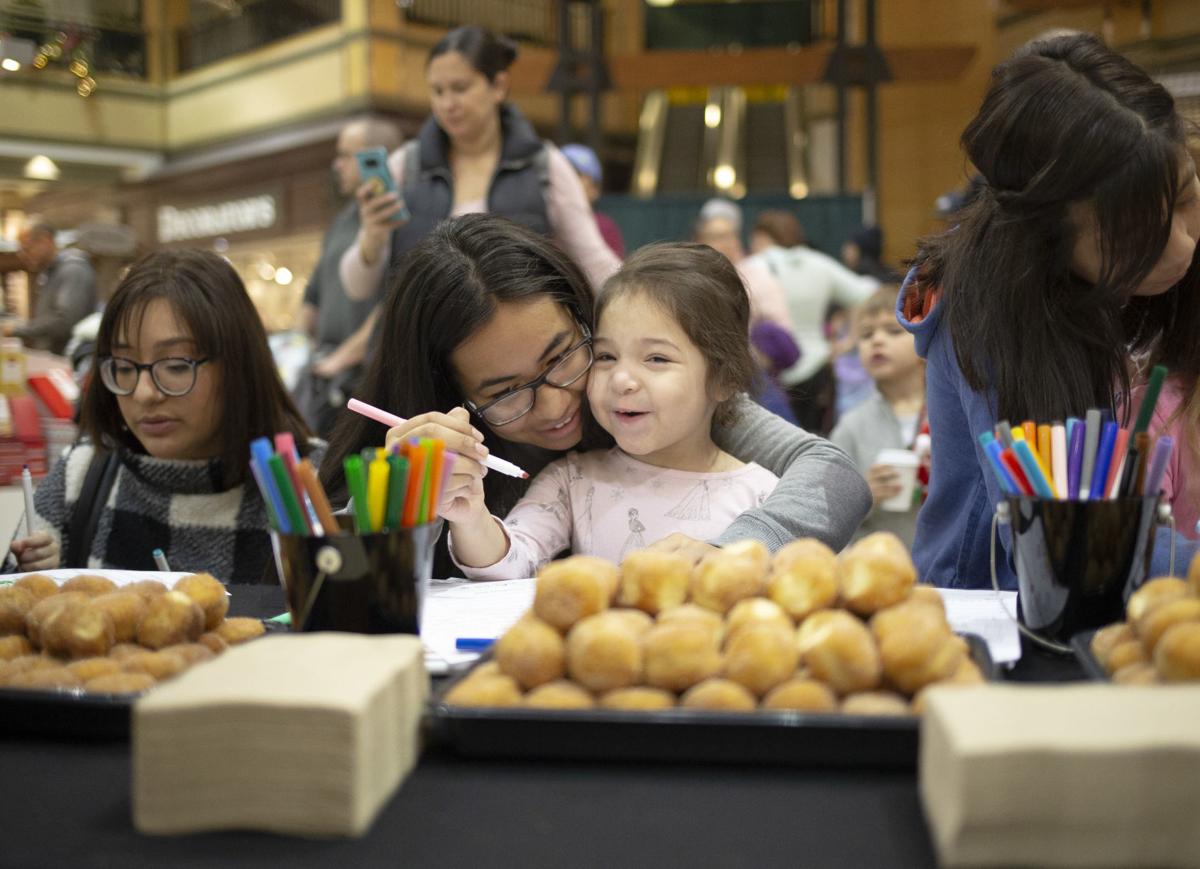 Sarai Robledo helps her niece Aubrey Pacheco, 3, write a letter to Santa Claus on Saturday, Nov. 23, 2019, at Valley Mall in Union Gap, Wash. Pacheco asked Santa for toys for both her and her sister. 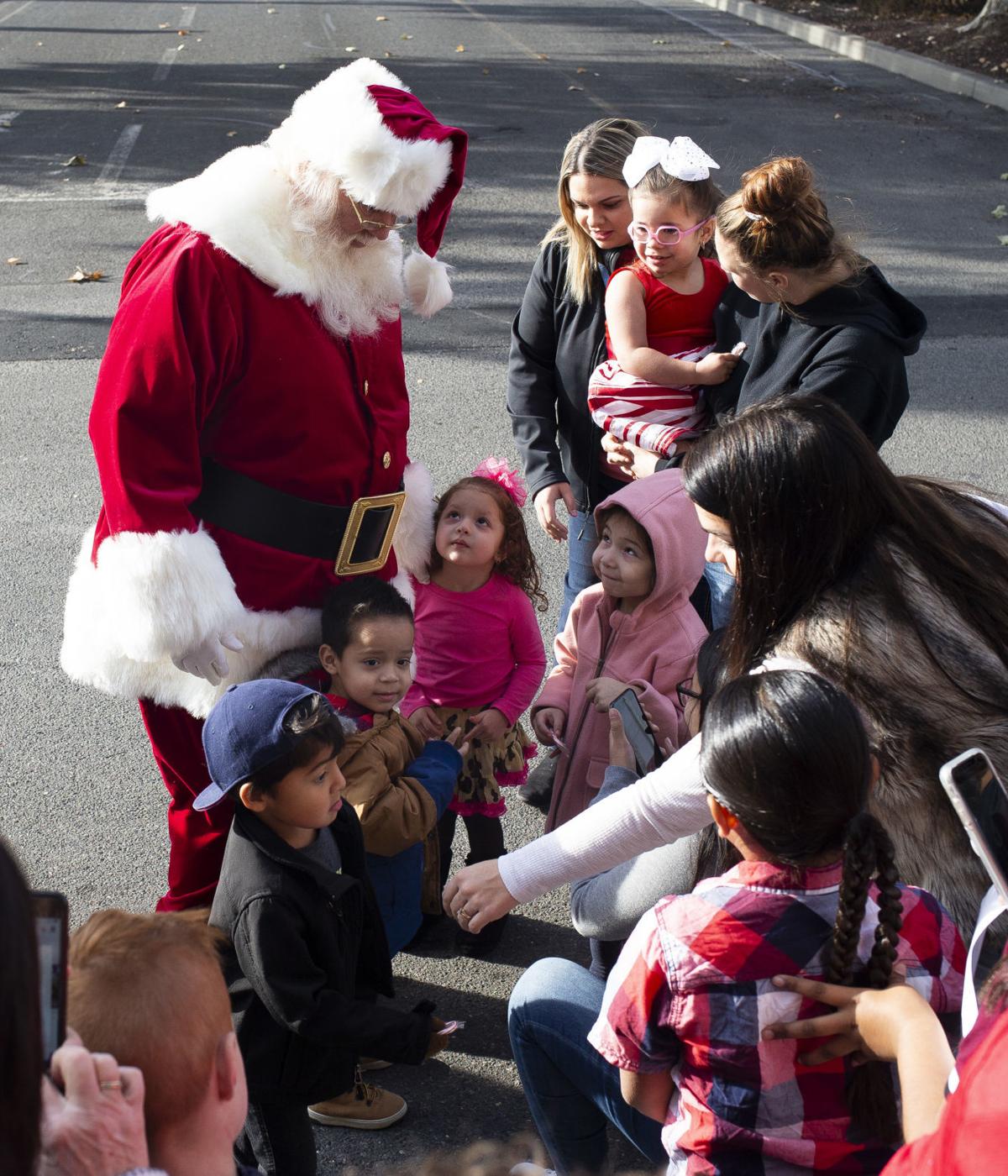 Sarai Robledo helps her niece Aubrey Pacheco, 3, write a letter to Santa Claus on Saturday, Nov. 23, 2019, at Valley Mall in Union Gap, Wash. Pacheco asked Santa for toys for both her and her sister.

Snow isn’t in the forecast for the Yakima Valley today, but you’ll be able to find yourself in a winter wonderland when you walk into the Valley Mall in Union Gap.

At the mall’s center court is a machine filled with a solution that makes artificial snow, creating a scene perfect for getting that holiday selfie. Santa, of course, is nearby to hear childrens’ wish lists.

Jacob Butler, marketing manager for the Valley Mall, said he aimed to emulate the larger-than-life holiday displays he saw in other cities. But more importantly, the displays — and events such as weekly storytimes with Santa — aim to persuade shoppers to log off the computer and head to the store.

“We want to be that place — a safe environment and a fun spot for families,” Butler said.

The events also provide an opportunity for retailers to interact with shoppers and create a positive impression that might prompt them to visit their stores, he said.

Cultivating a positive customer experience will be crucial for retailers — especially those with brick-and-mortar locations — as they try to capitalize on a truncated holiday shopping season; Christmas is less than four weeks away, and Hanukkah starts a few days earlier.

Analysts expect U.S. holiday retail sales to finish between $727.9 million and $730.7 million — about a 4% increase from last year, according to projections from the National Retail Federation, a Washington, D.C., retail trade organization.

Industry experts believe that despite the turmoil brick-and-mortar retailers have faced in the last few years, the holiday season provides ample opportunity to attract shoppers.

“Retailers need to know their customers well and rethink their strategies to align better with customers’ needs and expectations,” said Joan Giese, clinical associate professor in the Department of Marketing and International Business for the Carson College of Business at Washington State University.

Giese led a study, done in partnership with Edelman Intelligence, looking at the preferences of holiday shoppers in the Pacific Northwest.

It shows that while more people here are buying online, the %age of online-only shoppers — 3% — remains small. Meanwhile, 83 % of shoppers said they still shop equally in-store and online, mostly in-store or exclusively in-store.

Still, one can’t ignore the merits of online shopping or its impact on the retail industry, which has seen numerous bankruptcies and closures in recent years. The Yakima Valley has lost several retailers lately, including K-Mart and Toys ‘R Us.

The Washington State University holiday retail study shows that the most popular retail “holiday” in the days after Thanksgiving is Cyber Monday, a popular time for online retailers to provide deals akin to the ones brick-and-mortar stores offer on the day after Thanksgiving, known to most as Black Friday.

About 76 % of Pacific Northwest residents planned to shop on Cyber Monday, well above the 56 % who said they would do so for Black Friday.

But shoppers, for a variety of reasons, don’t want to do away with shopping in brick-and-mortar stores entirely. They value customer service, the ability to see and feel products and the ability to take products home immediately.

The key for retailers is to eliminating hassles. They can do that is by offering in-store pickup for online orders, a common practice among larger retailers, and making sure there is plenty of inventory for popular gift items, Geise said.

They need to figure out ways to make “shopping more convenient and easier,” she said.

Many local retailers are putting their energy into Small Business Saturday, a marketing effort developed by American Express to encourage customers to shop at locally owned businesses. Over time, however, it’s become an integral part of consumers’ holiday shopping plans during the long Thanksgiving weekend.

Locally, Small Business Saturday is one of the region’s most profitable shopping days, according to data from Womply, a San Francisco firm that provides transactions and online review data for small businesses.

Yakima retailers generated average revenues of $1,465 on Small Business Saturday in 2018 — about 55% more than a typical day, Womply reported

“Clearly there’s something going on,” said Brad Plothow, vice president of corporate marketing for Womply. “A great recognition or a great affinity with local businesses.”

Small businesses can also capitalize on last-minute shoppers. The days leading up to Christmas — Dec. 24, Dec. 20 and Dec. 23 — were top revenue days in 2018 for local Yakima retailers, according to Womply data.

“When you have a condensed shopping window and people who are prone to procrastinate, that bodes well for a small business,” Plothow said.

The holiday retail strategy for Farmgirl Pickings, a gift and home décor shop in Yakima, includes both discounts and a shopping experience that will keep shopping fun and stress-free, said owner Cindy Reed.

Reed believes the in-store experience is key. It starts when the shopper enters the retail space, which Farmgirl Pickings shares with another retailer, KH Limited.

“One of the first things they say when they come in is that it smells good,” Reed said about the scents generated by the candles displayed throughout the store.

Then there are displays of holiday merchandise and gifts for foodies, such as gourmet waffles and s’more kits. The store also makes a point of selling items made locally or within the Pacific Northwest.

“It’s bringing together a lot of fun things, Reed said.

Reed said the two retailers plan to open late as Christmas gets closer and to organize events, such as a shopping date night for couples.

“It gives you a different experience from a mall or a big box store,” she said.