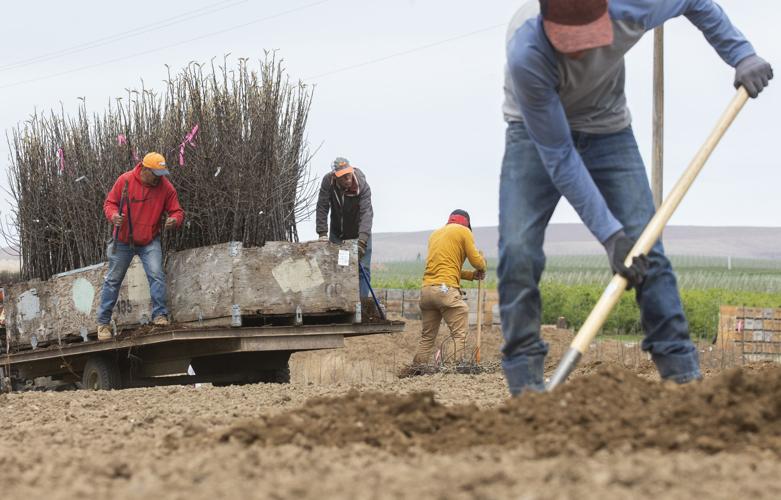 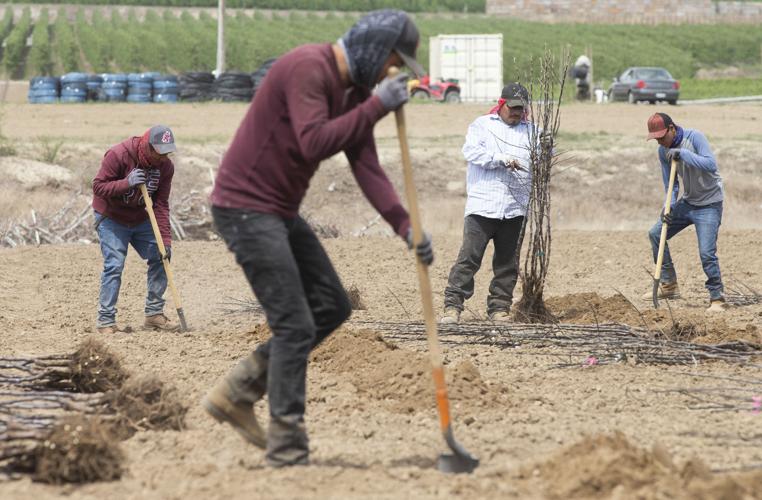 The use of temporary agriculture workers from Mexico and elsewhere has increased greatly over the past 10-15 years in the Yakima Valley and state of Washington, and that trend is expected to continue in 2022.

While the H-2A program which brings guest workers to local farms remains much debated and criticized by growers and farmworker advocates, both sides say the agriculture industry probably would not function without it.

“If we want to continue having domestic food production, we need (H-2A workers) to fill jobs in agriculture,” Jon DeVaney, president of the Washington State Tree Fruit Association, said last week to the Rotary Club of Yakima.

During the club’s March 31 lunch meeting, DeVaney noted that reliance on H-2A workers for hard-to-fill agricultural jobs has increased, from about 50,000 jobs across the U.S. in 2005 to more than 300,000 H-2A-filled jobs in 2021. He listed the amount of jobs because individual H-2A workers may have more than one work contract.

In Washington, there were about 1,000 H-2A jobs filled in 2009 and close to 30,000 jobs could be filled by those workers in 2022, DeVaney said. He stressed that because it is a long, complex and costly process to bring foreign workers here, the H-2A program is definitely not replacing or eliminating jobs for Americans.

“Very few domestic workers are applying for agricultural jobs. We see less than 100 (domestic workers) apply for these 30,000 (H-2A) jobs,” DeVaney said. “This is a last-resort kind of option.”

H-2A is technically the name of the visa that allows a foreign national worker to enter the United States to work in agriculture for a specified amount of time. The “A” stands for agriculture; there are other types of visas for foreign employees in other industries.

Employers are required by federal law to cover H-2A workers’ inbound and outbound transportation, housing and meals, and they are subject to the same wage and workers’ compensation laws as domestic employees, according to the U.S. Department of Labor.

Enforcement of these federal rules is often done by state agencies. For example, the Washington Department of Health handles the process of applying for and establishing H-2A worker housing, while agencies such as the state’s Department of Labor and Industries may inspect housing if problems arise.

Applying to bring these workers into the U.S. is a complicated, time-consuming and expensive process, said Dan Fazio, executive director of the Washington State Farm Labor Association.

“The process is too tough,” Fazio said. “The employer must show that there are insufficient U.S. workers, must agree to hire any willing and able U.S. worker who wants the job, and guarantee a wage that is approximately 20% higher than the required wage for farmers who do not use the program.”

“This program is only available for seasonal agricultural jobs. Therefore, dairies cannot use the program for milkers, because it is a year-round position,” he added. “Generally speaking, the program is limited to seasonal jobs of two to 10 months in duration. There are many, many restrictions on hours, working conditions, etc. It is highly regulated.”

DeVaney noted that employers are required to continue recruiting domestic workers for H-2A jobs through the first half of an H-2A worker’s contract. If someone is interested, the grower must hire the domestic worker while still paying the H-2A worker according to the agreed-upon contract.

“They must pay three-fourths of the contracted money to H-2A workers, even if they’re sent home,” DeVaney added.

Wages for H-2A workers are set by a complicated U.S. Department of Labor process that includes a survey of prevailing wages paid by growers in recent years. This process produces the Adverse Effect Wage Rate, or AEWR, which will increase from a 2021 hourly pay rate of $16.34 to $17.41 in 2022.

In a news release issued March 31, Columbia Legal Services attorney Andrea Schmitt argued that bringing in nearly one-third of the Washington farm workforce from economically struggling areas of the world pushes down wages. While the H-2A program is supposed to prevent this by surveying growers to ensure the AEWR is higher than prevailing wages, Schmitt said growers have manipulated the system to reduce what is actually paid to workers.

By stressing the flat, hourly wage instead of a per-piece rate based on each bucket or bin of cherries, pears or apples a worker harvests, the amount H-2A workers can earn is reduced by as much as 50%, Schmitt told the Yakima Herald-Republic.

“They’re offering wages that don’t match up with what workers can earn,” she added.

In his ruling on the case, U.S. District Court Judge Salvador Mendoza Jr. rejected the U.S. Department of Labor’s decision to ignore farmworker survey data which indicated higher piece-rate wages are the predominant practice in Washington agriculture. Instead, federal officials certified prevailing wage rates based on many Washington apple and cherry growers reporting they paid only the state minimum wage per hour to harvest fruit.

The judge ruled that ignoring the workers’ wage survey results would allow growers to unfairly manipulate the prevailing wage system.

“It cannot be denied: employers have an incentive to lie on the surveys,” Mendoza wrote in the decision. “A lower prevailing wage finding is in their financial interests. Even considering (the Department of Labor’s) reasons for not requiring the worker survey, the Court cannot understate the importance of the survey as a check on employers.”

Had the grower-only survey results been left in place, farmworkers’ wages would have been slashed — by 25% to more than 130%, depending on the crop, union officials said.

“If Mr. Torres Hernandez were paid the minimum wage instead of a piece rate, he would lose over $3,400 each year,” said Ramon Barba Torres, FUJ president, when Mendoza’s decision was issued.

The FUJ president said the farmworkers union has worried for years that growers might be manipulating the survey to lower wages for thousands of H-2A workers, as well as domestic farmworkers.

“Growers can get H-2A workers to work faster without an incentive of more pay because their visa ties them to one employer and they can’t seek better wages or working conditions at a neighboring orchard,” Torres added. “If growers could have hired H-2A workers to pick fruit at a minimum hourly wage, wages for all workers — including local workers — would have been forced down.”

In 2021, there were 28,727 H-2A positions certified in Washington, an increase of 7% from 2020’s 26,832 positions, noted Fazio, the WAFLA executive director. He said Washington experienced double-digit growth of the H-2A program from 2015-2019, but since that time growth has stabilized.

Practical ways to reduce a grower’s reliance on H-2A and domestic workers were discussed in February at the Washington wine industry’s annual WineVit meetings in the Tri-Cities.

Dustin Tobin, vineyard manager for Precept Wine Brands in Walla Walla, noted his need for labor increases every spring during the pruning and suckering process, which trims branches and removes weak or sick vine shoots.

“At the end of May, I get 70-80 people in and pay them per plant for suckering, then those 70-80 guys go right into cherries (harvesting),” Tobin said.

Joe Cotta, vineyard manager for Ste. Michelle Wine Estates, just north of Sunnyside, said to reduce the need for H-2A labor, he has increased mechanization and changed the layout and design of vineyard.

“Mechanized pruning, shoot thinning, leafing, suckering have typically cut labor demand costs by 50% in those blocks (of changed layout),” Cotta said. “Mechanization has made our labor needs a little more consistent year round.”

The 2022 growing season could result in overtime being paid to workers in all areas of agriculture in Washington state — if they work more than 55 hours per week.

The Washington State Supreme Court struck down the overtime exemption in the dairy industry last year. Following that, the Legislature passed a bill making all agricultural workers eligible for overtime pay in 2022 and establishing a 40-hour workweek by early 2024.

Andrea Schmitt, an attorney with Columbia Legal Services who helped litigate the dairy industry overtime case – which originated in Yakima County – said she is interested to see how many workers will exceed 55 hours of work per week at the height of harvest season.

“There’s a little bit of an ease-in this year, so we’ll see how that goes,” Schmitt said. “Come 2024, we will have full overtime rights for agriculture workers across the board in Washington.”

Growers are not looking forward to that, and agriculture industry leaders such as Washington State Tree Fruit Association President Jon DeVaney hopes some flexibility can be part of the new overtime requirements, especially considering how labor shortages and weather can affect worker scheduling.

The WSTFA believes allowing workers to work up to 50 hours a week for no more than 12 weeks of the year would benefit both growers and their work force during the busy harvest season.

“It’s better for workers than limiting their hours to 40 and forcing them to work multiple jobs to maintain their income,” DeVaney added.

Joel Donofrio is the business reporter for the Yakima Herald. He was born and raised in the Chicago area, but he and his wife, Cathy, fell in love with the beauty (and low humidity) of the West and moved here in 2009, eventually relocating to Yakima in September 2021. They have two young adult children, Anthony and Joanna, and a dog, Molly.

When he is not taking photos of construction sites, tracking down new and relocating businesses or catching up on agricultural trends, Joel enjoys playing guitar, singing, listening to music and playing and watching sports.

I-82 westbound back open near Yakima after collision