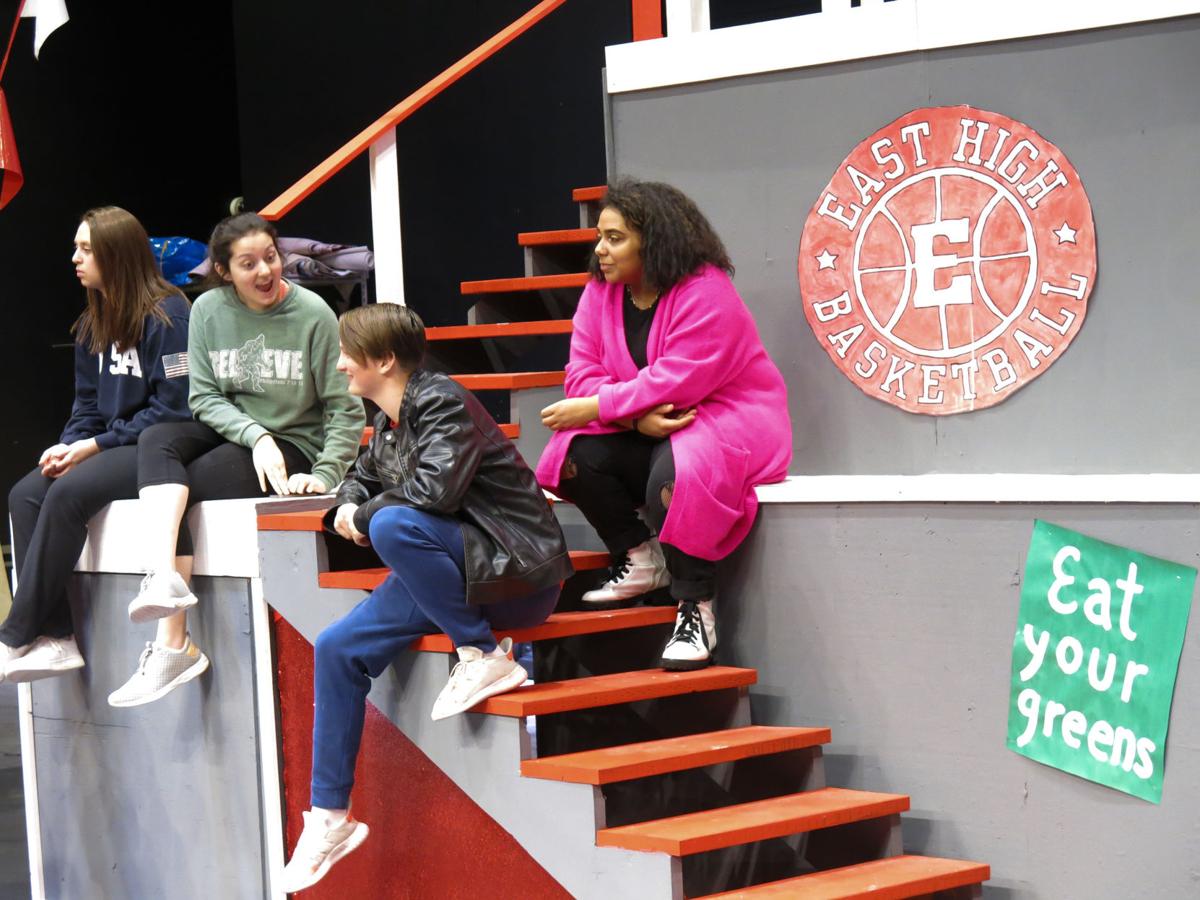 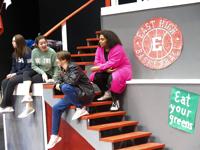 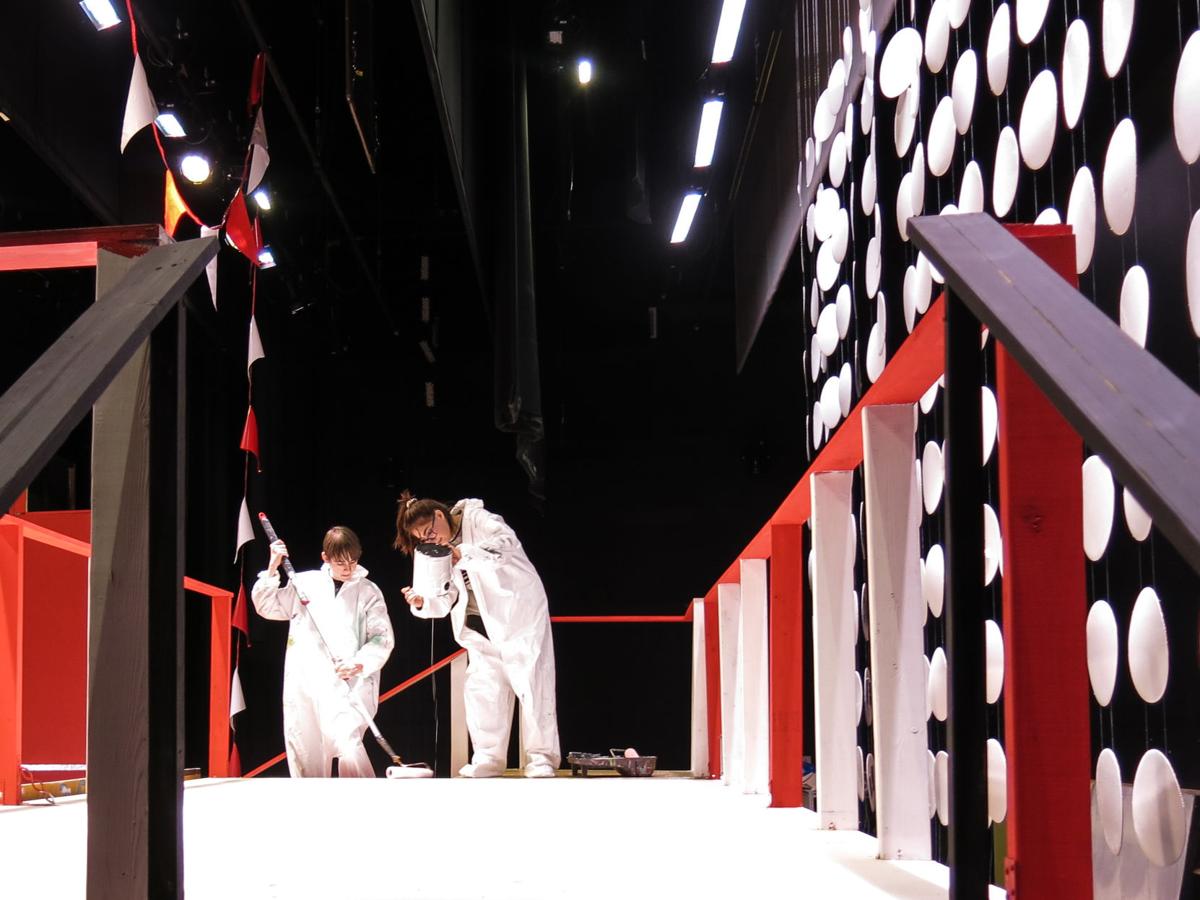 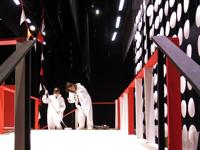 Prepping the set with paint on Saturday, Feb. 9. 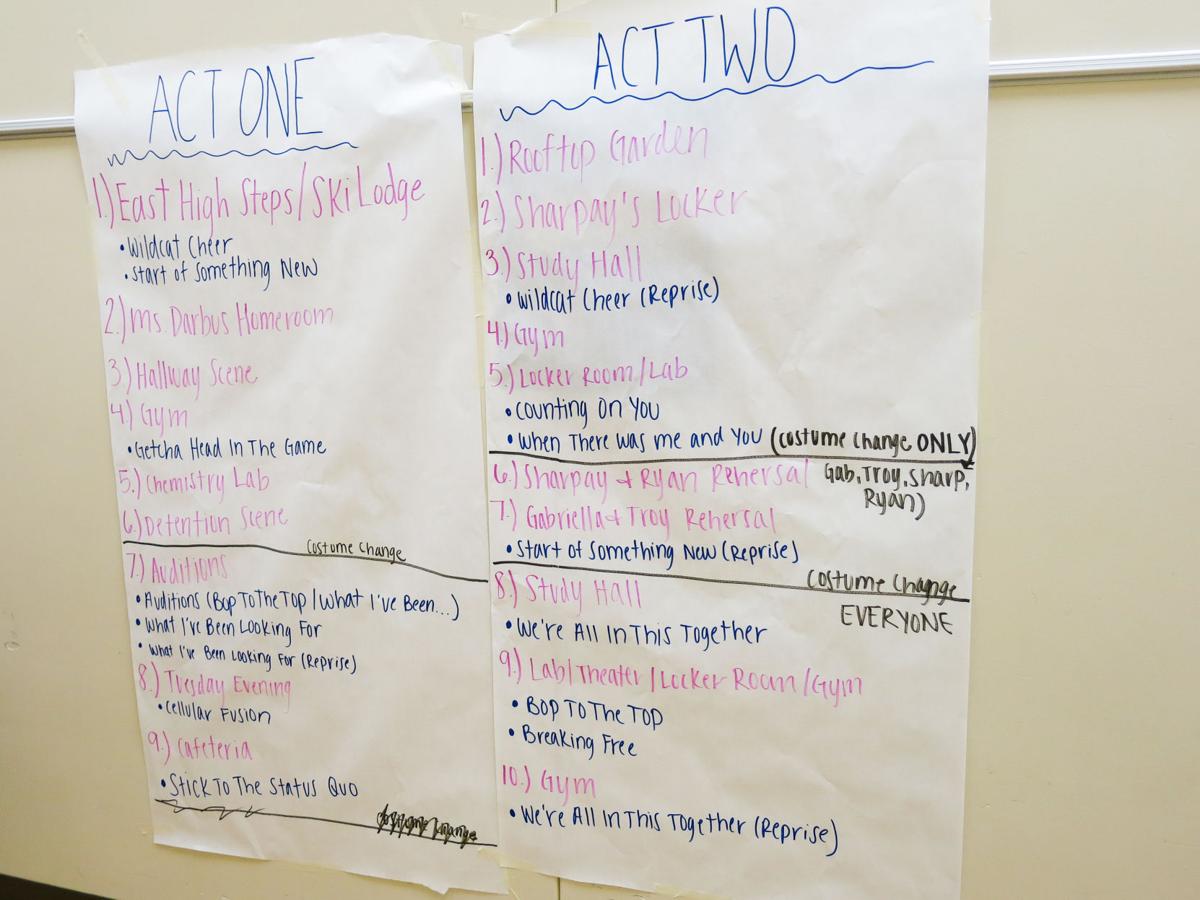 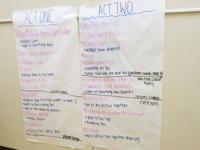 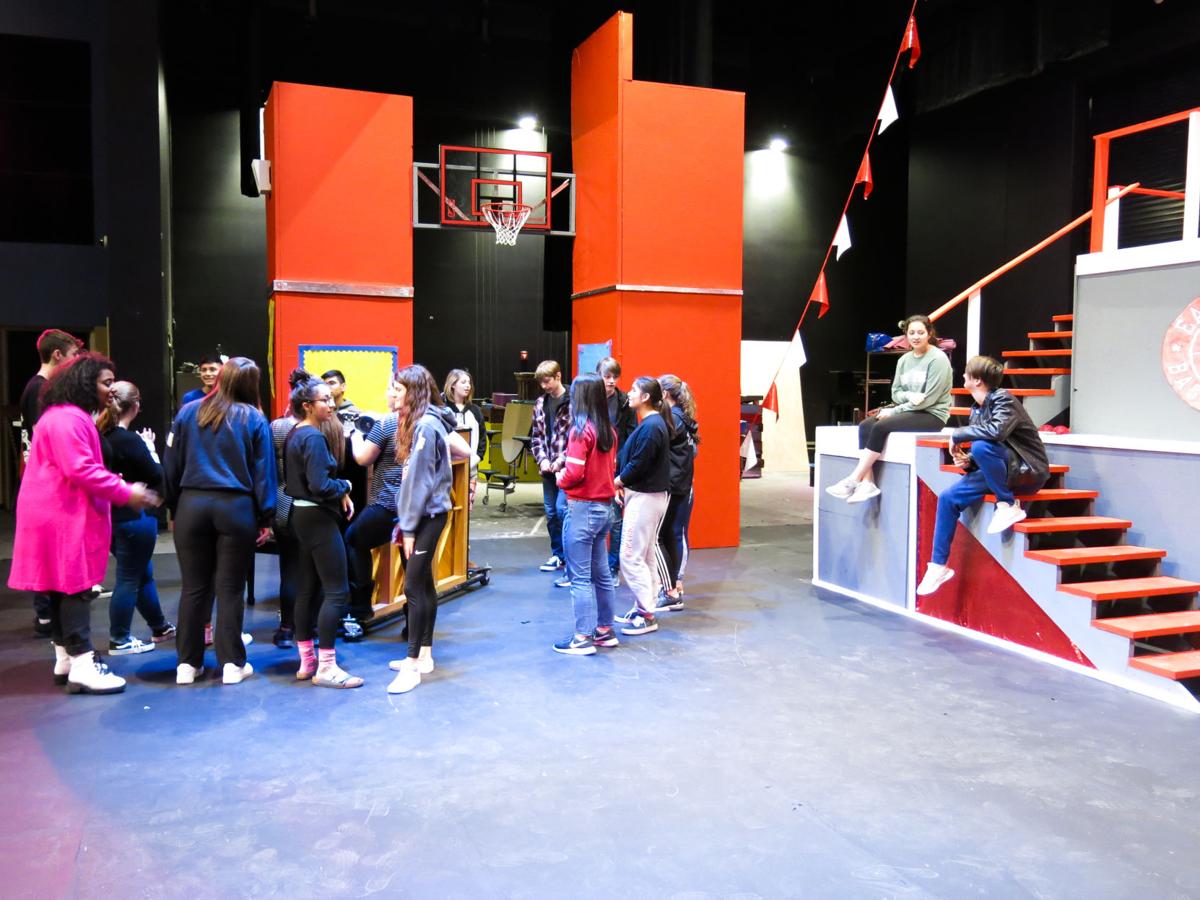 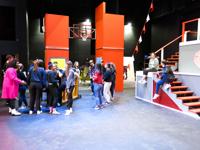 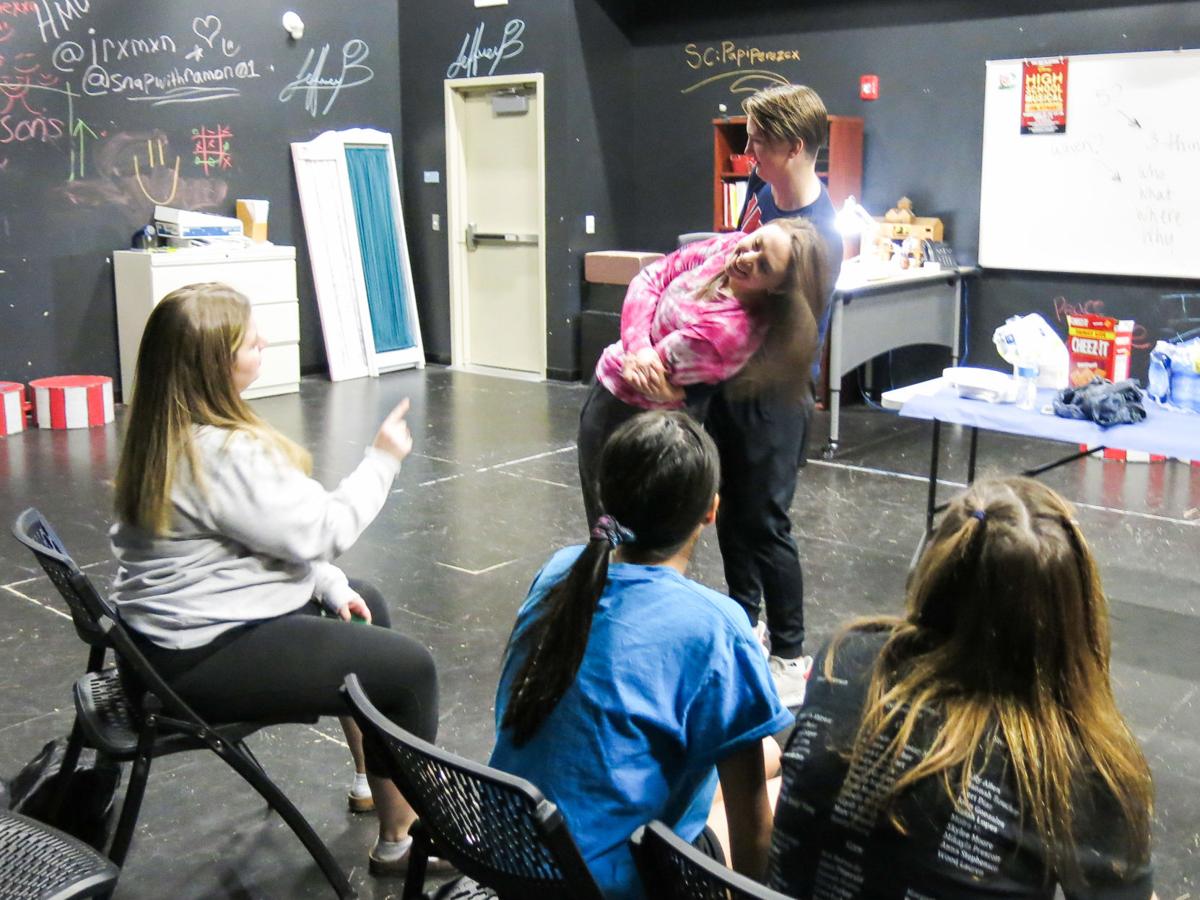 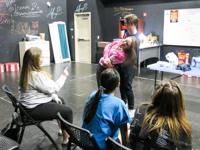 Prepping the set with paint on Saturday, Feb. 9.

Editor’s note: Creative Commons is all about creativity in the Yakima Valley. Features writer Miles Jay Oliver introduces readers to local talents brimming with imagination, the venues displaying their work and spots where inspiration flourishes and masterpieces are born. To suggest a person or topic, email moliver@yakimaherald.com.

YAKIMA, Wash. -- The sky’s awash in gray light on a cold Saturday afternoon in mid-February.

It’s quiet outside Eisenhower High School, until the first hints of an insulated din rise from just beyond a crack in one of the school’s side doors — propped slightly open to allow late arrivals quick access without disturbing what’s underway inside.

Notes of jazzy music mix with a chorus of adolescent voices and echo through the corridor ahead: “bop, bop, bop ... wipe away your inhibitions ... bop, bop, bop ... straight to the top ... goin’ for the glory ... we just won’t stop ... till we reach the top.”

Less than a week from opening night, the Ike Players are reaching the end of the second act in a dress rehearsal for Disney’s “High School Musical.” And though most of their fellow students are enjoying the first day in a long holiday weekend, more than 80 members of the production’s cast, crew and pit are hard at work to ensure they’ll give the audience a performance to remember.

The first person to catch the eye is a tall, slender fellow decked out in the sort of outfit he definitely wouldn’t be wearing if he didn’t have a part in the show.

Although he’s clearly listening expectantly for a coming cue, he politely leans forward for a request to be pointed toward the audience seating area.

Rather than gesturing in the appropriate direction, the young man — later revealed to be Caleb Coscarart, one of the leads in this high school musical about a high school musical — smiles slightly as he leads the way through the backstage darkness. Moving behind freshly completed set pieces, music fills the air and competing voices rise as the brisk journey ends in a spot stage right. Nearby, banks of empty seats will undoubtedly be filled to capacity when the curtain rises later tonight.

Leaning over the pages in a binder illuminated by a small overhead lamp, a girl — not only the stage manager, she’s also president of the drama club — smiles as my eyes adjust to the rapid changes in light.

She waves her arms above her head to be sure I see her before racing in my direction.

“It’s been just a nightmare of a day,” she says breathlessly as our attention turns toward the players on the stage. To the untrained ear, the words may seem harsh. But for anyone who’s ever found themselves involved in the theater world, the words are indicators of good things ahead.

They mean the minor hiccups have been spotted and potentially major catastrophes averted. A nightmare dress rehearsal so many days prior to the first performance allows the problem-solving to begin.

Peterson dashes toward the stage where tall set pieces painted cherry red rise on either side. At the center, a stepladder stands at full attention and shadowy silhouettes are backlit by a light that slowly changes from blue to orange then back again.

Peterson moves around, wringing her hands before swinging both arms frantically at her sides. Her attention is drawn from one actor to the next, two fingers rise to her forehead as she turns away in apparently deep concentration for a moment before spinning back suddenly to begin reaching for nearby shoulders.

She conveys individual instructions to heads that nod before calling out to performers on an upper tier.

The players take their places as Peterson moves just out of the way, and a run-through of the show’s show-stopping climactic number begins.

It has a message about everyone coming together and working through their differences to do the very best they can. But whether life imitated art or something happened the other way around isn’t clear.

“One thing I like about this cast is they all pitch in to work,” Peterson says. “If I were to say there’s no rehearsal tomorrow, they’d be disappointed. I’ve tried to create a family where kids have ownership and ... look ... they’ll work on their own.”

The rehearsal is over, but she’s brought me back stage to show me a room where Coscarart — my usher earlier through the inner sanctum — has remained with co-star Ondrea Garza to practice choreography. Under the instruction of Moira McGregor, the two go through a series of repeated steps and dips in an effort to get everything just right in their roles as Ryan and Sharpay Evans.

Coscarart, 16, and Garza, 18, are having a blast, even though they agree they couldn’t have been cast in roles more different from their real lives.

“I mean, I’ve never worn pink on purpose in my life,” Garza says as the duo shares a moment of laughter and admit it’s all part of the fun.

Others have stayed behind, like Nataliegh Cash, who geared up to help paint the floor of the stage.

Cash’s accustomed to being in front of the audience, but wasn’t able to try out for one of the roles. Still, she’s pleased to have a key role backstage, ensuring everything goes on without a hitch.

“I’ve actually never worked with a cast that wants to work more,” she admits, gesturing to the throngs of folks who remain, although the day’s official work is complete.

There’s Aliyah Shines, a 17-year-old senior with big plans to begin auditions when the summer hits and she travels to New York.

“I just have this passion for theater and singing that I’ve had since I was born,” she explains. “I just want to change lives with music — it’s always been my dream.”

This will be the first show for others like Alana Garza, who auditioned for the musical on a whim.

“I just felt like I wanted to do something different this year,” said the 16-year-old, who also plays flute in the marching band.

The only one of her friends who tried out, she said the support she’s gotten has been overwhelming and she was looking forward to opening night — the first time she’ll ever appear before a real-life, actual audience.

It’s an opportunity to overcome nerves and build a little more self-confidence, an idea echoed by another newcomer.

Emily Yang is an exchange student from Taiwan who’s attending Ike for the year. Back home, she doesn’t have opportunities for productions like these.

“I really like drama and to be on the stage,” Yang smiles broadly. “And I get to make more friends and build up my self-confidence.”

And in a show like “High School Musical,” that’s exactly what it’s all about.