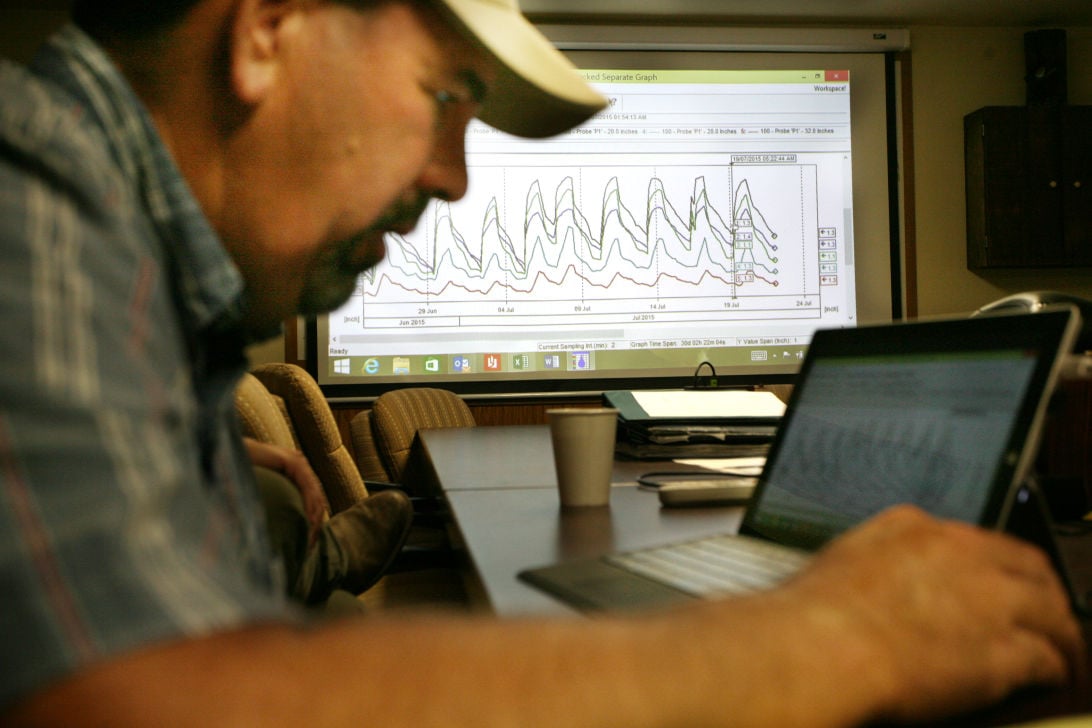 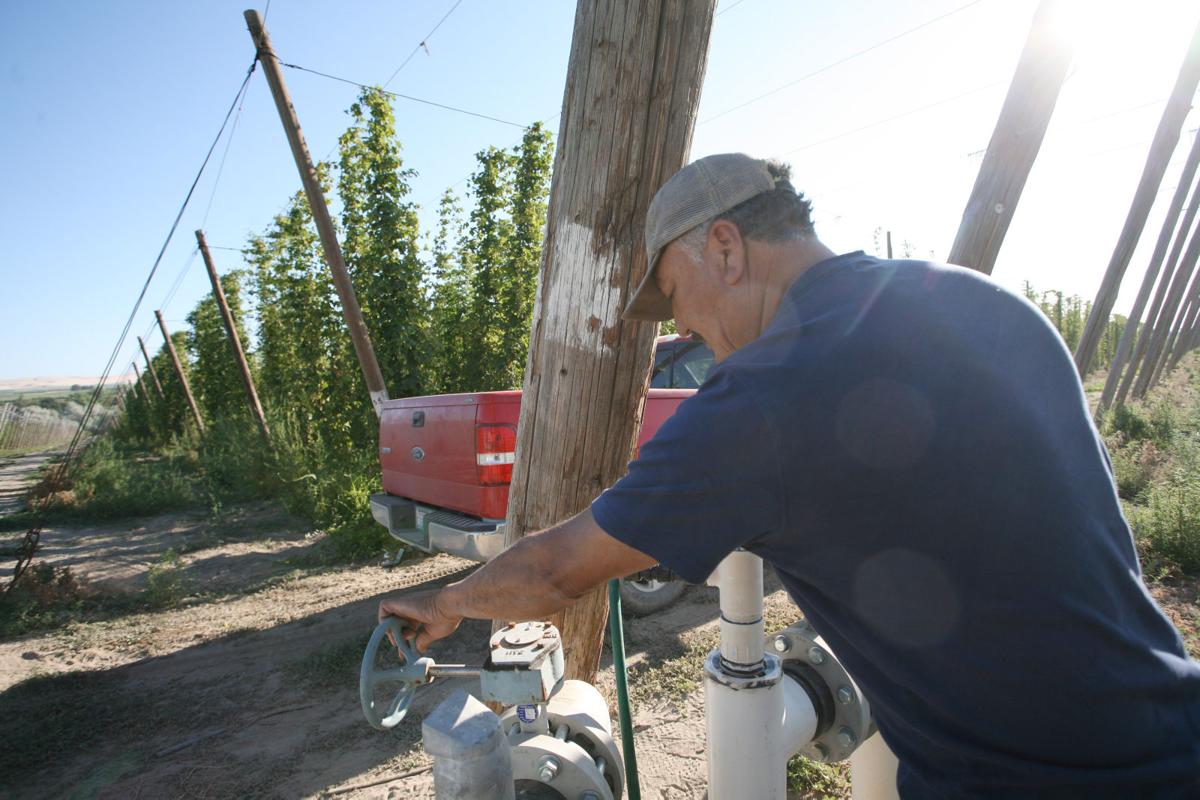 George Ochoa, the irrigator for Carpenter Ranches in Granger, switches irrigation water from one hop field to another Wednesday, July 22, 2015, to the hop fields. Farmers predict this year's extreme heat and drought will leave with yields roughly 10 percent below average on aroma varieties, favored by the booming craft beer industry. (ROSS COURTNEY/Yakima Herald-Republic) 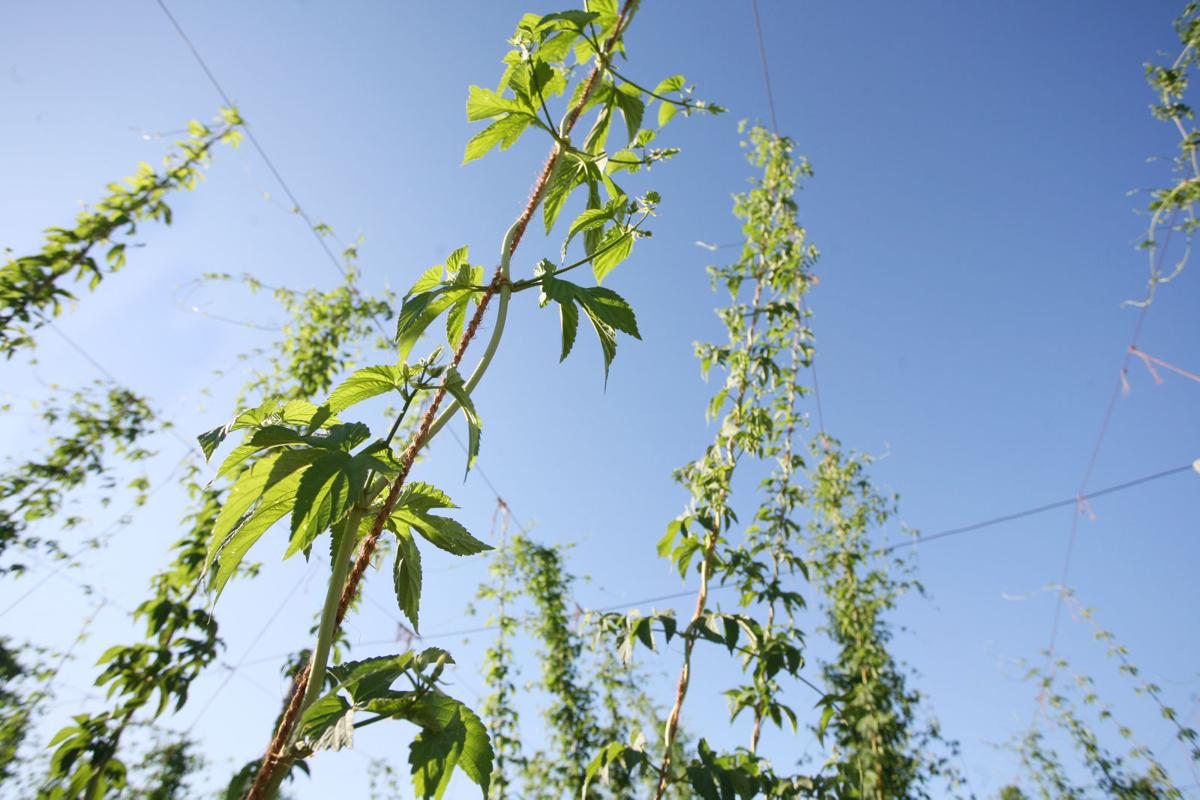 George Ochoa, the irrigator for Carpenter Ranches in Granger, switches irrigation water from one hop field to another Wednesday, July 22, 2015, to the hop fields. Farmers predict this year's extreme heat and drought will leave with yields roughly 10 percent below average on aroma varieties, favored by the booming craft beer industry. (ROSS COURTNEY/Yakima Herald-Republic)

GRANGER — In one hop yard at Carpenter Ranches, where irrigator George Ochoa turns valves off and on to rotate water, vines grow lush, leafy and all the way to the trellis wire high above his head.

In another, the plants grow thin and sparse, stretching halfway up their twines, at most.

This year’s erratic growth, caused by extreme heat and the state’s worst-ever drought, has the Yakima Valley’s hop producers fearing lower-than-average yields in some places and for some varieties, though they’re not sure by how much.

“Hops are one of the most difficult crops to estimate a yield,” said Brad Carpenter, a member of the seven-generation hop-growing family.

The Yakima Valley produces more than  75 percent of the nation’s hops, used to flavor beer.

When estimating yields, growers and industry officials discuss numbers reluctantly, and carefully couch them with caveats and disclaimers when they do.

“It’s region-specific and irrigation district-specific,” said Mike Roy, co-owner and hop operations president for Roy Farms, which like Carpenter Ranches, has hop yards in three irrigation districts with different levels of supply based on their rights.

Ann George, executive director of the Washington Hop Commission, estimates that some aroma varieties, favored by the booming craft beer industry, planted in areas with rationed water supplies could produce at  10 percent below the average yield for the past five years.

But that’s a rough estimate, made about a month before harvest begins near the end of August, she warned.

“A lot can happen,” George said. “I’m not going to take that to the bank.”

Growers tiptoe cautiously with estimates to avoid causing an overreaction from buyers.

The craft brew industry, which uses more hops and a greater variety than mass-produced beer, is growing by 18 percent per year, driving a surge in demand that producers struggle to meet. The average price paid to growers was $3.83 per pound in 2014, up 13 percent over the previous year.

If buyers even suspect a shorter-than-expected supply, they may over-purchase and end up with a glut, said Roy.

“You can create panic in the industry,” he said.

Water supply has been the biggest factor this year.

In Carpenter’s example, the lush hops grow in a field irrigated by the Sunnyside Valley Irrigation District, which, with senior water rights, delivers a full supply.

The skinny vines are in a plot on the Roza Irrigation District, with junior rights and a 46 percent water supply. The Roza district completely shut off water for three weeks this spring to stretch supply.

Roy has noticed the same thing.

His family grows hops in the Selah-Moxee Irrigation District, the Roza and the Wapato Irrigation Project.

His lowest yields likely will be places in the Wapato project, where outdated canals, deferred maintenance and lack of staff cause delivery problems.

“I could show a spot (in the Wapato project) where the vines are actually dead,” he said.

Just five years ago,  70 percent of the Yakima Valley’s hops were alpha varieties, used simply as a bittering agent for beer. Alpha hops thrive in the heat and dry conditions of south-central Washington.

Since then, the ratio has flipped.

Today, Valley growers have roughly 70 percent aroma hops, used to create the complex flavors driving the surge in craft brews. Some of those aroma varieties, with European parentage, don’t like the heat as much.

Still, nobody is counting anything out.

Brad Carpenter still believes his skinny vines, the aroma variety Simcoe, might surprise him in the end. They’re green and alive, just smaller than usual. He has seen such plants produce a lot of hops and bushy plants produce few.

“You can get tricked a lot of times,” he said.

MOXEE — U.S. hop growers, the bulk operating from the Yakima Valley, are predicting they will harvest 5 percent more hops this year compared to 2014.

Once again, I have a few reporting tidbits left over after finishing up a story.